Intel’s solid state drives (SSDs) have been highly sought after by enthusiasts for its performance and reliability established since the days of the legendary Intel X25-M. The recently launched Intel SSD 520 Series (codenamed Cherryville) is the latest from the computing giant and it is finally here. It’s a few months late to the high-end consumer SSD game (as witnesses from our Tech Awards 2012 roundup) but that’s mainly because of Intel’s strenuous and stringent year-long validation process.

Although the ingredients behind Intel’s latest 'dish' are somewhat familiar, Intel has thrown in a few special elements to stay ahead of the pack. 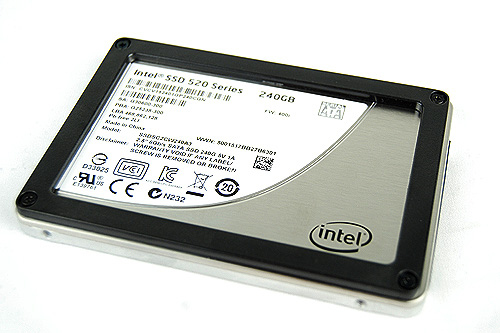 Firstly, Intel’s latest SSD has made the switch to a SandForce SF-2281 controller (a change from the Marvell controller used on the SSD 510 series). This is the same controller that is also used by many other high-end consumer-grade SSDs, such as Kingston’s HyperX SSD, Corsair’s Force GT and OCZ’s Vertex 3, just to name a few. However, it stays ahead of the game by employing a special firmware exclusive to Intel SSDs. With this special firmware, Intel says users of its SSD 520 series drives can expect to have fewer reliability issues (crashes, BSODs) than other SSDs that employ the same SF-2281 controller.

Apart from the SandForce controller, the new Intel SSD 520 series also uses the latest 25nm NAND flash memory. However, it distinguishes itself thanks to its joint venture with Micron Technology, IMFT - the company that manufactures the NAND memory used in Intel SSDs. Thanks to this unique relationship, Intel is able to have the first pick of the absolute best quality memory from IMFT.

Clearly, apart from outright performance, Intel is hoping to stand out from the pack by banking on reliability - thanks to its exclusive firmware and access to top quality memory chips. This is an important point because SSDs which employed the SF-2281 controller were plagued by a BSOD bug that has since been rectified with a firmware update. However, there are still some users who continue to experience BSODs and stuttering performance.

Anandtech, for example, reported that while the firmware update has fixed most of the non-Intel SSDs, there will still drives which suffered random occurrences of BSODs, such as in this case here, where their system would crash while running Battlefield 3. The exact same system ran Battlefield 3 fine when they switched over to an Intel SSD 520 series drive. However, the good thing is the problem isn't widespread as we didn't encounter this on our test bed and neither did we chance upon our community voicing out the problem.

In any case, it's good to know that Intel is putting special focus to tackle the drive's compatibility and performance matters with their own customized firmware. As enthusiasts would have come to know by now, firmwares may be small, but they are essential to a drive's capabilities and longevity in the market. We detail more of the Intel SSD 520 series on the following page before we share performance results.

Write a Review
Compare This | Specifications
Class-leading performance
Much improved over Intel SSD 510 series
Special firmware exclusive to Intel
Slightly pricey
Below average IOPS performance on Iometer
Our articles may contain affiliate links. If you buy through these links, we may earn a small commission.
Sponsored Links