108 Appreciate: A month with the Xiaomi Mi Note 10 (and 10 Pro)
Product Listing
AMDIntel

As we highlighted earlier, what makes the Pentium Dual-Core E2xxx series so appealing is that this L2 cache constrained processor takes on all of the charming traits of the Core 2 Duo processors with the same processor microarchitecture. And with less L2 cache, this directly correlates to a nice price cut. Compared against the highly popular Core 2 Duo E6320 (the E6300's replacement at US$163), the Pentium Dual-Core E2140 / 2160 processors are 50% less expensive (US$70 and US$84 respectively) and the only differences are the slower 800MHz FSB operation and the 1MB L2 cache. So the burning question is of course the impact of the measly L2 cache. We'll leave you to find that out in our results segment coming up shortly.

With the very small price delta between the Pentium Dual-Core E2160 and E2140, we preferred showcasing the former model for the following reasons: it is a 1.8GHz processor, similar to the Core 2 Duo E6300 model that we first overclocked a year ago, the higher 9x processor multiplier allows speedier CPU core clock increase when stepping up the FSB ladder than the E2140's 8x multiplier and thus negating the need of an overclocking-class motherboard as well as not needing high speed memory. As such, overclocking the Pentium Dual-Core E2160 should be easier as well as a less expensive affair than with the E2140.

As usual, we set out to find out what kind of overclocking headroom one can get with just air-cooling and by using the default CPU cooler. Thus no extra costs are incurred in our overclocking process. All you need is a reasonable Intel P965 or Intel P35 motherboard and you're set for some massive speed boost. After some trial and error, we managed to boost the Pentium Dual-Core E2160 from 1.8GHz (200MHz x 9) to 3.33GHz (370MHz x9) - that's close to double the clock speed boost! And all this was achieved without any voltage increase to either the CPU or the P35 chipset of our motherboard. One note here is that we set the CPU's VID to AUTO and at this setting, the CPU actually boosts the required voltage as required depending on the clock speed. This is a phenomenon that we first observed when the Core 2 Duo processors first hit our labs and we were impressed that the CPU is clever enough to request more voltage when the clocks are beyond default operations. Essentially, for 'simple' overclocking like this, you may not even have to interfere with manual settings. Of course we did explore manual settings but we met with no luck. Still, rock-stable operation at 3.33GHz is something to behold from a sub US$90 chip. 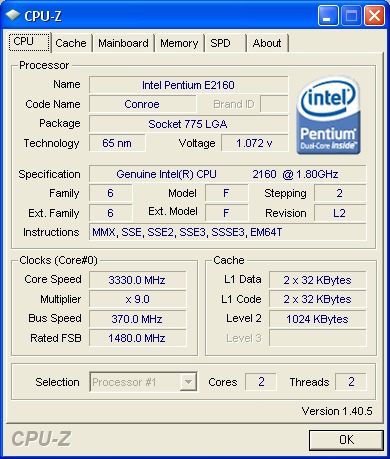 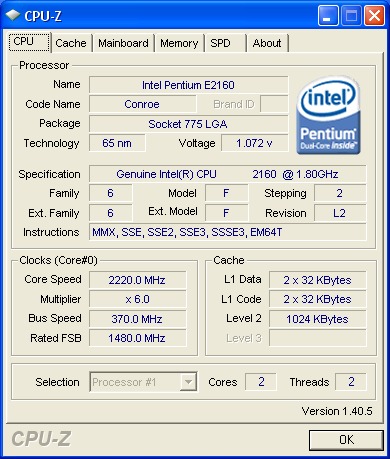 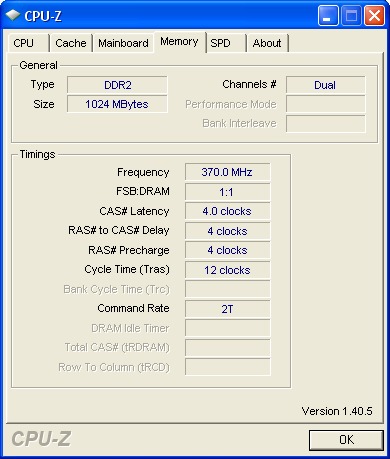 One note here is that at 3.33GHz, the FSB operates at 370MHz, which means the memory doesn't operate any slower than DDR2-740. So if you aren't too comfortable with memory being overclocked (until unless you are aware the full capabilities of the memory chips on your module), we suggest that you should stick with memory modules that are certified to handle the actual operating speeds on your system. In this case, DDR2-800 memory is your safest bet to ensure safe DDR2-740 operation. Memory errors are very diverse and can be a chore to diagnose if some your applications work fine in the overclocked state while some others throw bizarre tantrums. Sometimes you might not even hit this hitch till months later and that's when you would find it difficult to pinpoint the issue since your overclock has been stable all this while. Thus it pays to ensure you have the right memory for the job.

DDR2-667 memory is still the sweet spot and if you are trying to keep a close cap on your system upgrade expenditure and yet want to indulge in overclocking safely, you can do so but cap the FSB at 333MHz. At this FSB frequency, the Pentium Dual-Core E2160 would be operating at 3GHz which is still plenty fast. For those who would like to replicate our feat, value-class DDR2-800 memory can be had for just a little premium over the DDR2-667 models.