Intel’s line of NUC mini-PCs is one of my favourites, and is a testament to the ingenuity and imagination (sometimes wild) of the engineers in the company.

The Serpent Canyon, otherwise officially known as the NUC 12 Enthusiast, is a different take on the small-form-factor that we have previously seen from Intel – such as the Dragon and Beast Canyon.

While the Canyon’s gaming DNA is still visible in terms of styling and design, the Serpent’s chassis is smaller than a gaming console and comes packed with integrated components. So apart from storage and memory, you cannot upgrade the CPU and GPU. It’s kind of built to compete with closed platforms such as gaming laptops and even gaming consoles. In fact, it's more akin to the old-school Intel NUC kits that have everything integrated, except for storage and memory.

But unlike previous Canyons that I’ve reviewed, the Serpent Canyon comes with just a single option for CPU – the Core i7-12700H. It’s a 12th Gen mobile processor that’s also used in many of today’s newest gaming laptops. My test unit that Intel sent over also comes with 16GB of DDR4 memory and a 512GB SSD for storage.

What’s unique, at least for us here at HardwareZone, is that the Serpent comes with a built-in Intel Arc A770M GPU, the first time we get to see one of Team Blue’s much talked-about discrete GPU solutions. We've covered the basics and how they are different here if you're not familiar with Intel Arc graphics. 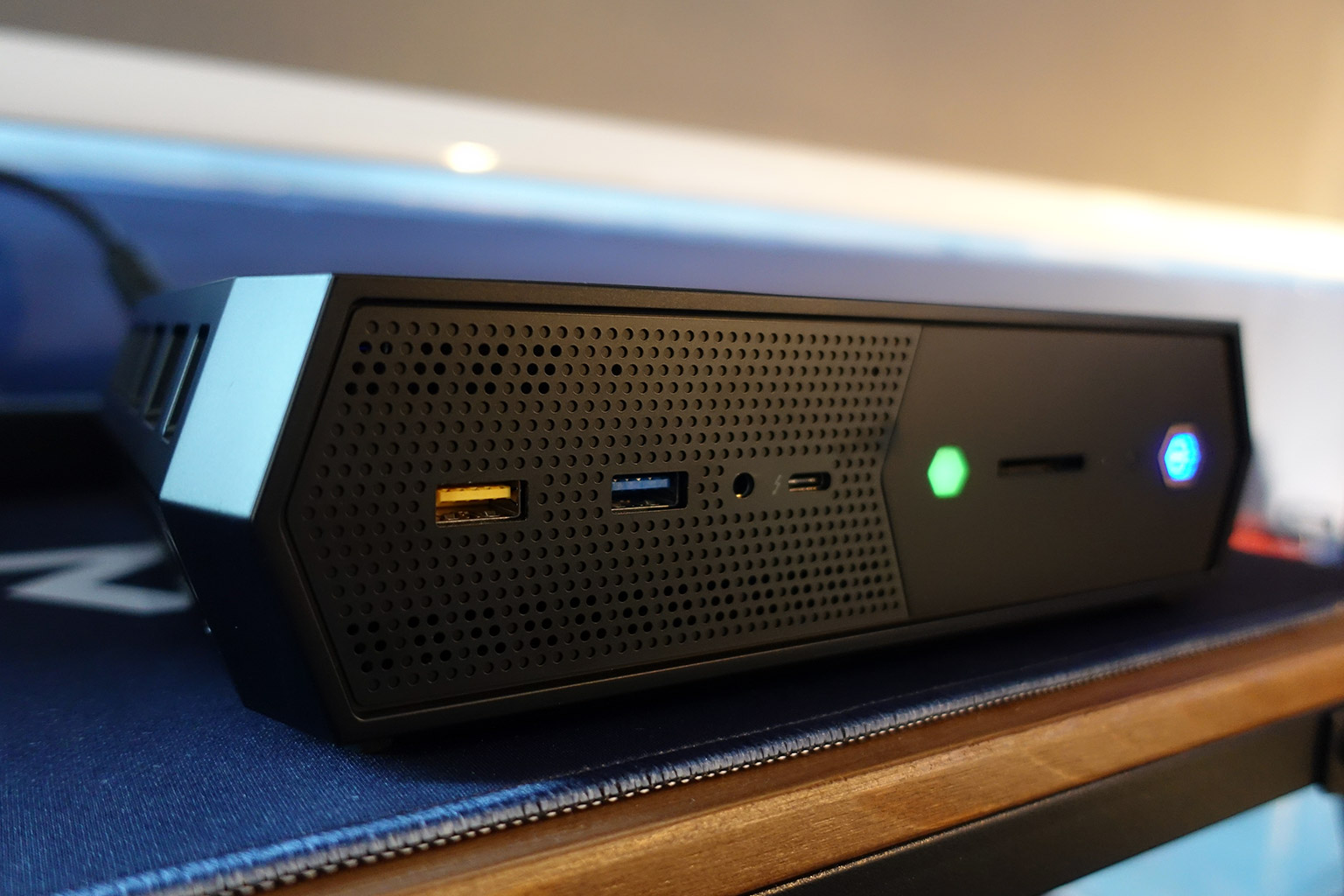 At 23 x 18 x 6cm, the Serpent Canyon makes the PlayStation 5 and Xbox Series X seem huge. Its case volume is just 2.5L, which is smaller than 17-inch gaming notebooks and some 15-inch ones too. The left panel (or top panel, depending on how you orient the NUC) looks nondescript when the computer is powered off. Once turned on, though, the panel’s center becomes an RGB-lit square. 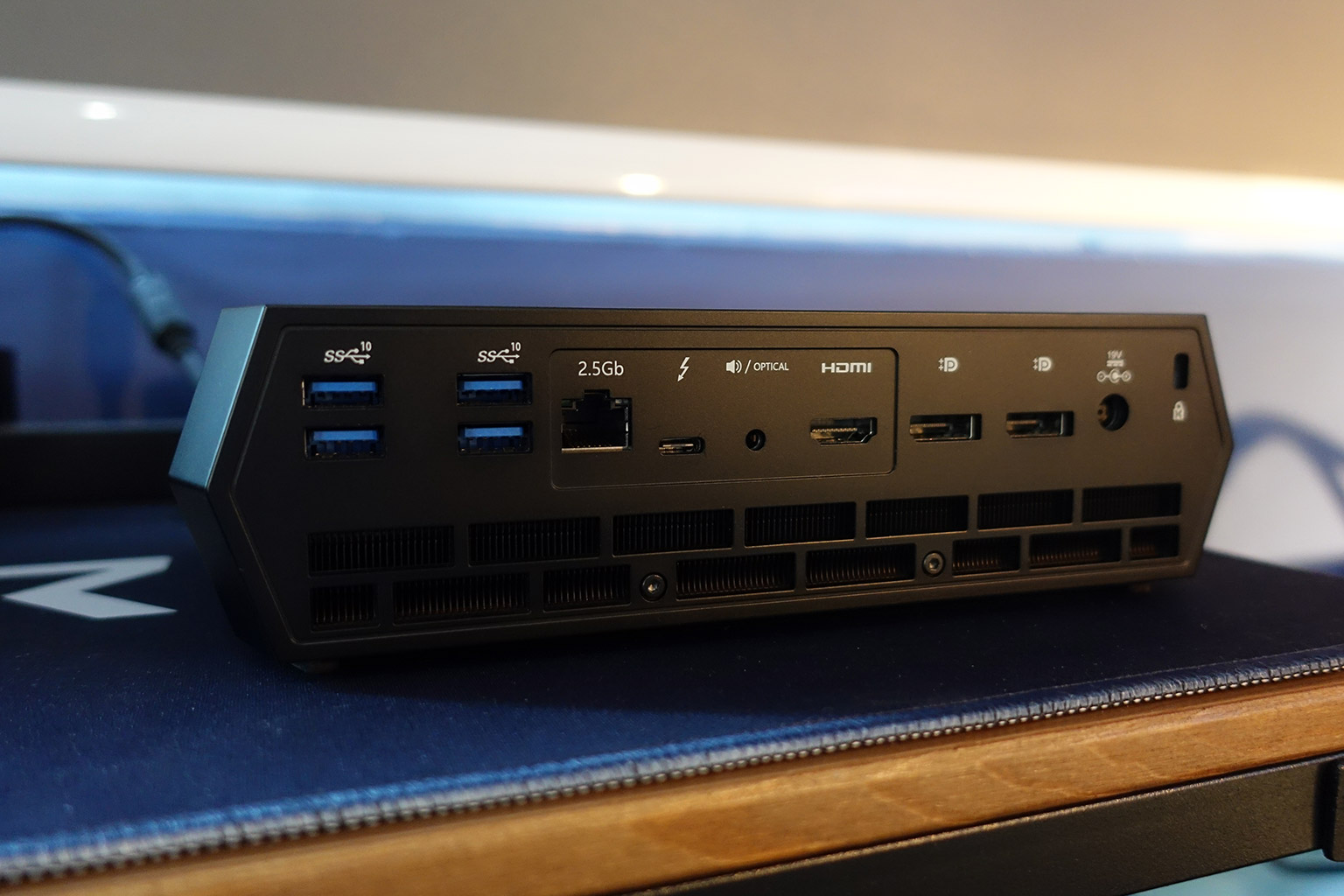 Moving into connectivity, the Serpent Canyon offers several USB 3.2 ports along with Thunderbolt 4 (USB-C) and 2.5Gbps Ethernet jack. Display outputs include HDMI 2.1 and two DP 2.0. There’s even a full-size media card reader and a dual microphone array. Like most mini-PCs of this size, however, the Serpent Canyon relies on an external 330W power adapter, which comes in about half its size. 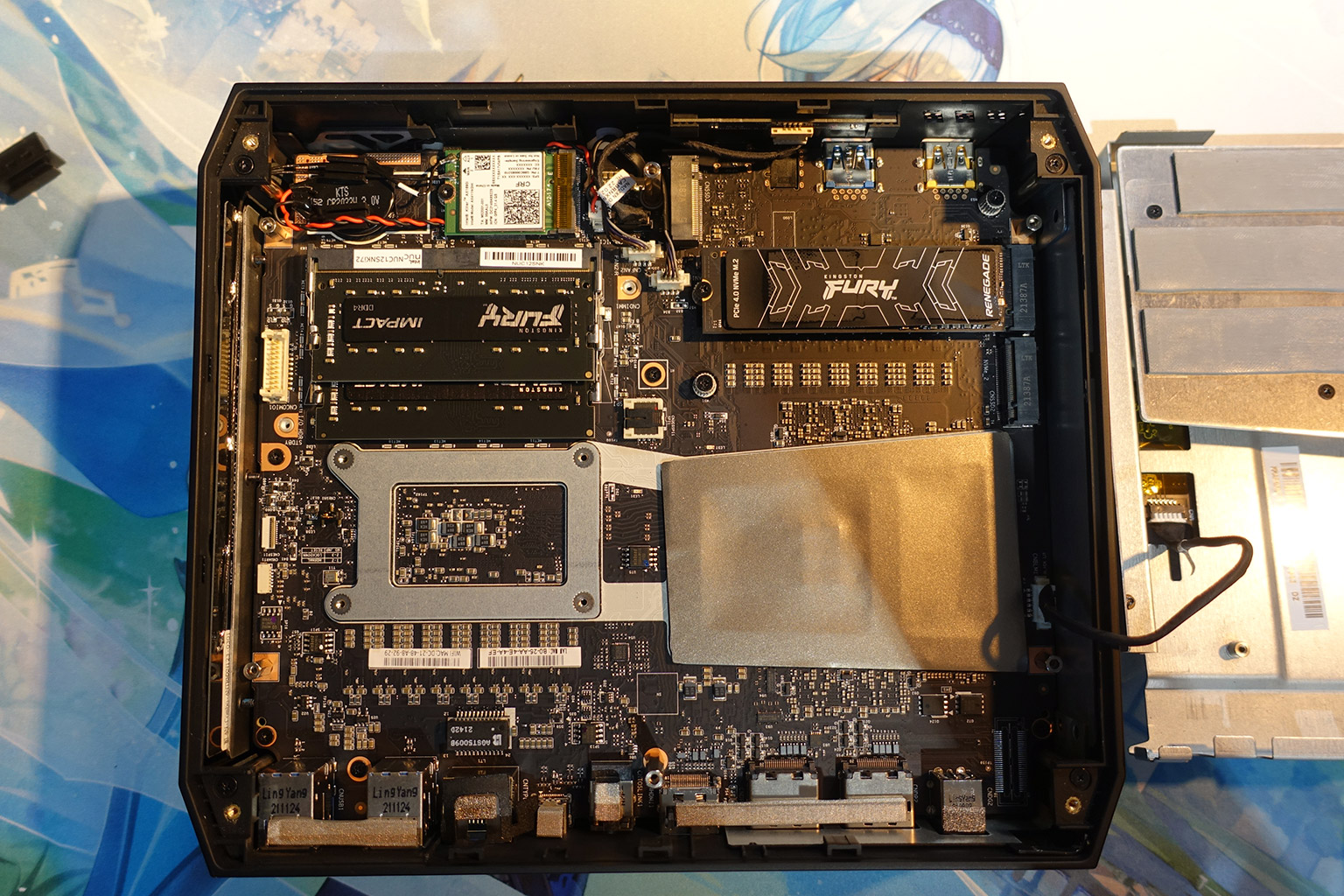 Unlike the NUC Extreme Kits, the NUC Enthusiast Kits do not offer much in the way of upgrades - you are basically stuck with the Intel Core i7-12700H and Arc A770M processors - although there are expansion three M.2 slots for storage and dual-channel support for DDR4 memory.

Here’s a look at how it performs in a couple of our game benchmarks. 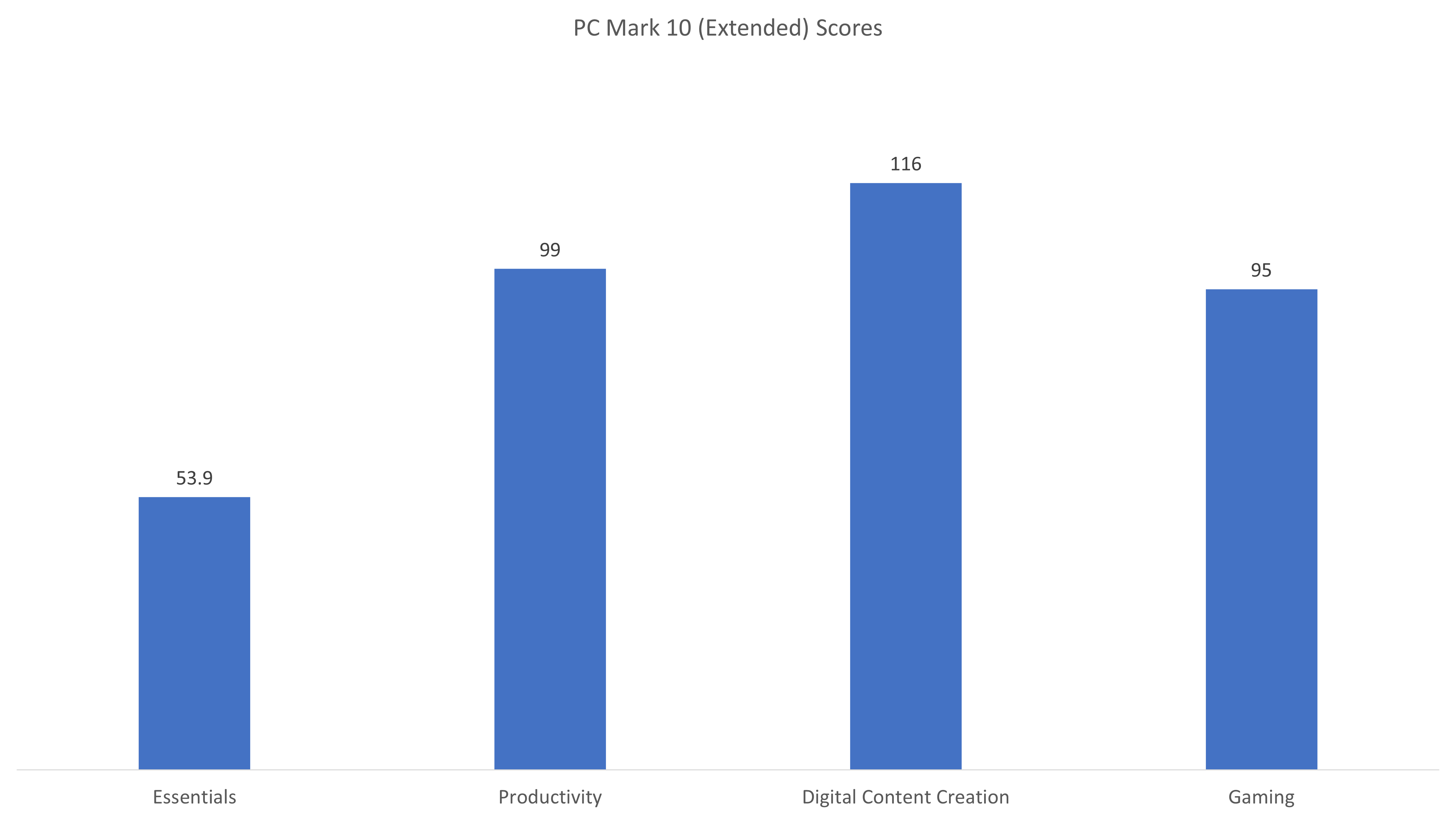 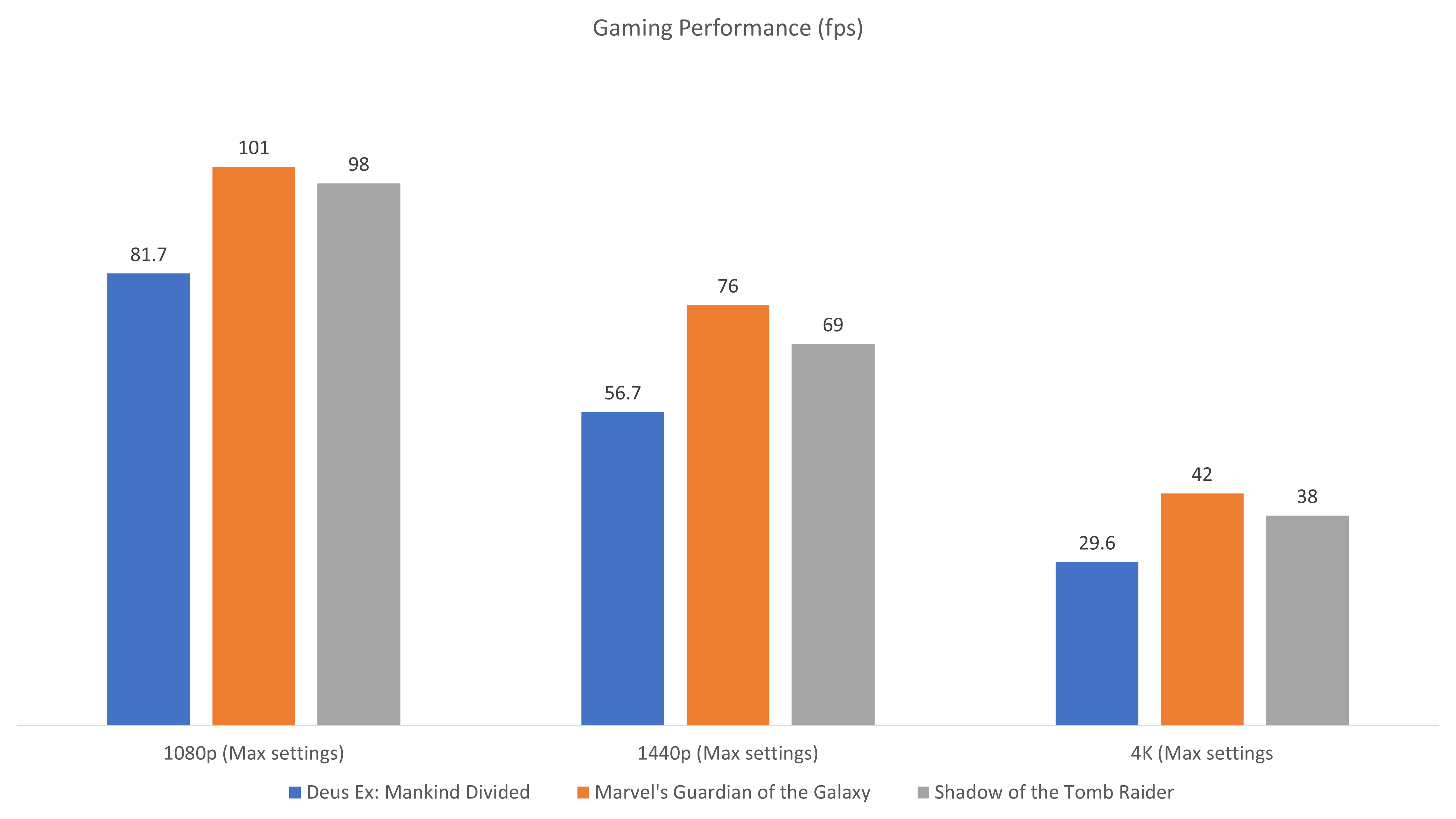 The Serpent Canyon allows Intel to showcase its Arc A770M (with 16GB GDDR6 memory) in a small form factor platform that is not really limited by its thermal capabilities, unlike laptops. To be clear, the A770M was never built to be a high-performance GPU, but as an alternative to NVIDIA’s lower tier RTX 30 series GPUs like the RTX 3060 and 3070 and at a lower cost, and targeted at the 1080p gaming segment. In 1080p scenarios, the A770M performs pretty well for its class. 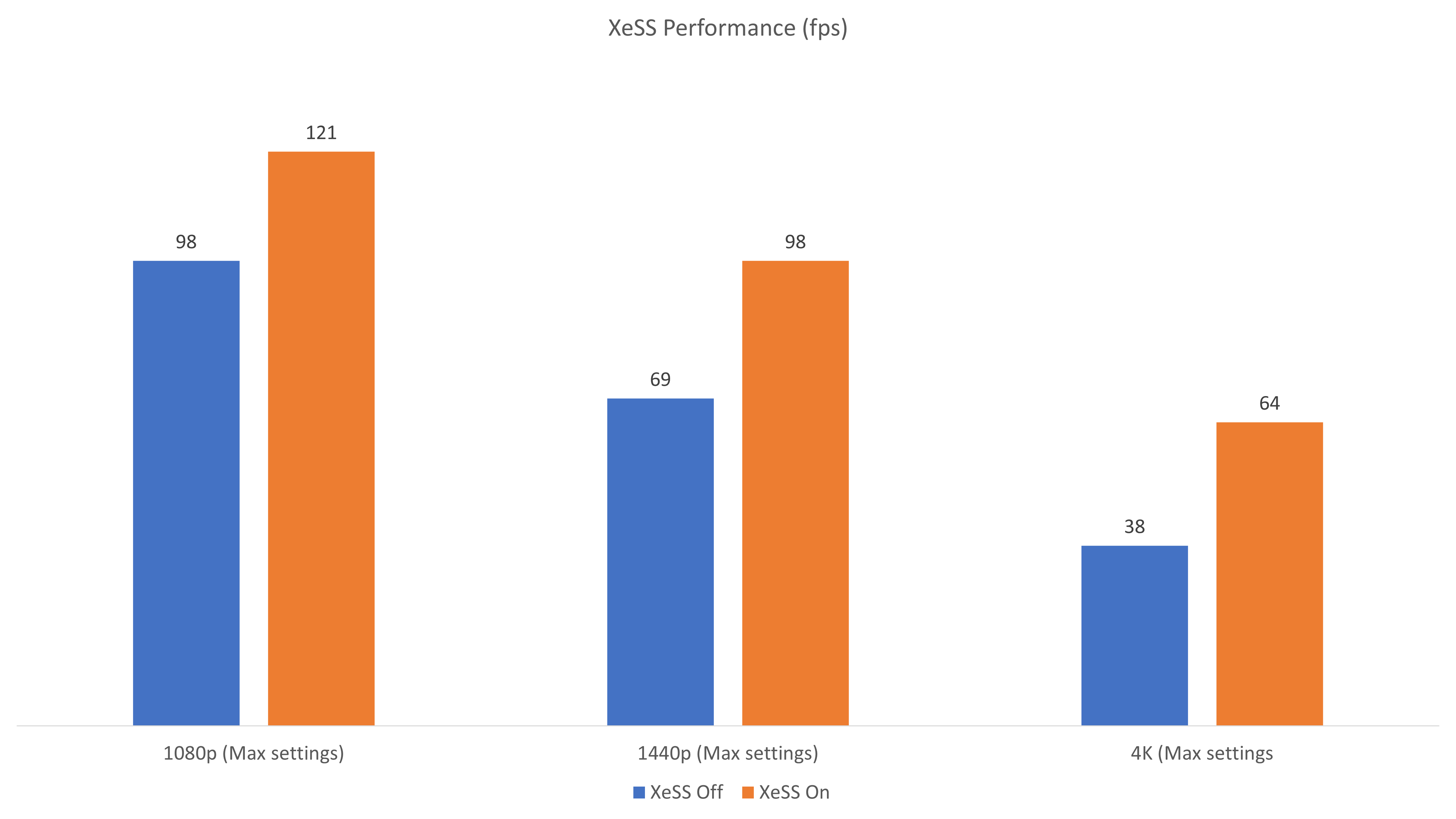 For super-scaling, NVIDIA and AMD have their own DLSS and FSR solutions respectively. Intel, of course, has XE Super Sampling (XeSS). Games that support XeSS are still relatively low as it’s a recent tech, but Shadow of the Tomb Raider is an early adopter and our benchmark with it shows XeSS to have some pretty good potential.

Packing technology into small spaces is something Intel’s NUC mini PCs have always done well. The NUC 12 Enthusiast Kit aka Serpent Canyon, like the Extreme Kits that I have reviewed previously, is a great example of what Intel engineers can be capable of. While the Extreme Kits are true desktop-grade mini PCs, the Serpent Canyons are geared towards gamers who are looking for a gaming laptop alternative with a chassis that’s smaller than a PlayStation 5 or an Xbox Series X - and more powerful.

My only gripe is that there really isn’t much you can tinker with the Serpent Canyon, apart from memory and storage expansion. It’s still a unique and powerful mini PC but my opinion is that the NUC 12 Extreme Kits offer better value and future proof (you can upgrade both CPU and GPU), and with a footprint that’s honestly not that much larger than the Enthusiast Kits.

The Intel NUC 12 Enthusiast Kit is available here, with a price starting from S$2,159.