Apple hikes prices of products in Japan by as much as 25%, unlikely to happen in Singapore (for now)
Product Listing
AMDIntel

Since the launch of the Intel Core i7-3960X Extreme Edition processor in November 2011, the accompanying Intel X79-based motherboard has had a limited selection of LGA2011 processors to match. The market segmentation of the Sandy Bridge-E series is very clear; they are pitched to power users as they have the most demanding requirements. On top of that, the Sandy-Bridge E chips are able to support multi-GPU configurations. This is due to a powerful integrated PCIe controller on board the processor to support up to 40 PCIe Gen 3.0 lanes. Coupled with an Intel X79 motherboard that has PCIe 3.0 compatible switching components, the board is able to distribute these lanes to support up to 4-way SLI or CrossFireX graphics cards setup.

The last Sandy Bridge-E processors released to support this platform were the Core i7-3820 and the Core i7-3970X chips. Our experience with the Core i7-3820 made us conclude its compute performance was roughly on par with the Intel Core i7-3770K "Ivy Bridge" processor.  However, the Core i7-3820 is considered a budget Sandy Bridge-E chip, manufactured on the older 32nm fabrication process. That would mean its only advantage would be its multi-GPU configuration support from its larger and powerful PCIe controller. Due to the limited availability and the high price of these Sandy Bridge-E processors without much much tangible gain, it lead many to question the viability of owning them and their supporting motherboard platform. Further to that, there are several enthusiast and gaming-centric Ivy Bridge motherboards (such as the Gigabyte GA-Z77X-UP7) that would incorporate a PLX switching chip component to double the PCIe lanes available. These further erode any benefits the Sandy Bridge-E processors bring for the vast majority of people.

However, with the first release of new Intel Core i7-4000 series "Ivy Bridge-E" processors, they bring much needed updates to the current Sandy Bridge-E platform owners. Currently, the Intel Core i7-4960X Extreme Edition CPU is the most powerful chip of the lot. The most important change the new chips bring is the use of the 22nm fabrication process that introduces 3D Tri-gate transistors while retaining the same LGA2011 CPU package. This means, all the new changes brought by the the Ivy Bridge processors are now extended to this Extreme CPU series as well. 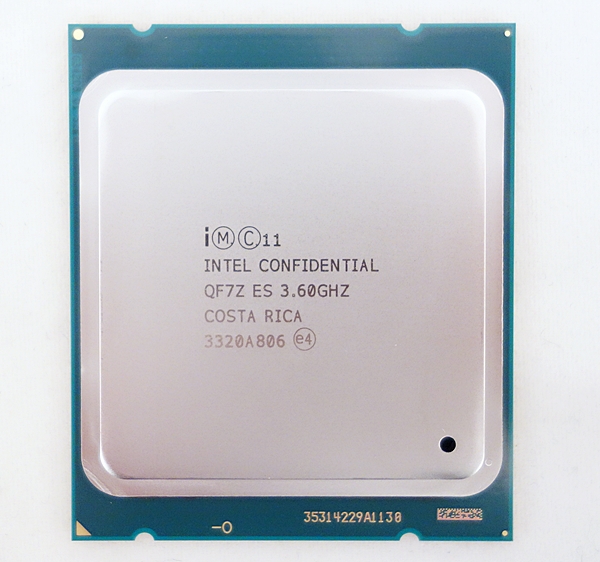 The proposition of the new generation of Intel Core i7-4000 series chips is its ultimate performance. From gaming, 3D content creation to extreme overclocking, the new Ivy Bridge-E processors are touted as the ultimate desktop PC CPUs - for now. We take a quick look under the hood to see what has changed (or not).

The signature quad-channel memory controller in the extreme processors has now been upgraded to support speedier DDR3-1866 memory modules on the new Ivy Bridge-E CPU, up from the DDR3-1600 class that was officially supported by the older Sandy Bridge-E CPUs. For a start, the extra headroom, provided by the increment of the supported operating frequency, will increase the theoretical bandwidth of the memory modules to roughly 14.9GB/s. This is an improvement of about 17 per cent over the theoretical bandwidth of DDR3-1600 memory modules. In terms of practical improvement in computing tasks, the advantages in the increase in memory bandwidth may not be so evident to the end-user. However, for overclockers, they would be well-served if they had invested in overclocked memory modules that are able to operate reliably beyond 1866MHz. This is because some overclockers may attempt to increase the base operating frequency of the motherboard during overclocking, which may inadvertently increase the DRAM frequency of the board beyond its the stipulated operating frequency of 1866MHz. Hence, at this point, the overclocked memory modules will come in handy to ensure the stability and reliability of the overclocked system.

Not the Same 6 Cores

Similar to the older Sandy Bridge-E architecture, the new architecture of the Ivy Bridge-E class processors, supports up to 6 processing cores that can execute a maximum of 12 concurrent threads of instructions when Hyper-Threading is fully taken advantage of. 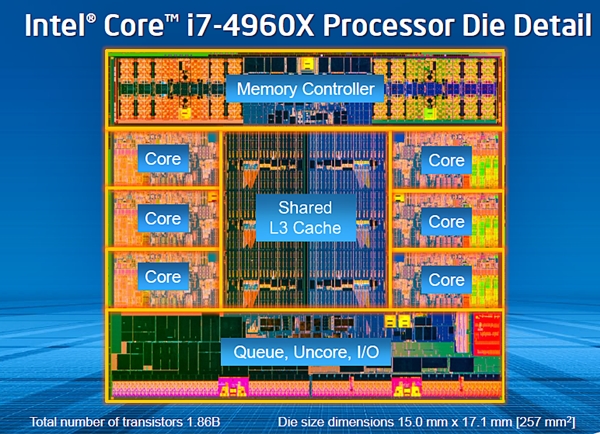 As we can see from the die shot above, there are no unmarked regions of the die; unlike our previous experience with the Intel Core i7-3960X processor that appeared to have two disabled cores. Due to the upgraded 22nm fabrication process with its 3D Tri-gate transistors, these transistors are able to be packed more densely, resulting in a much smaller die size. In fact, the transistor count on the Ivy Bridge-E is lower than that of Sandy Bridge-E with 1.86 billion as opposed to 2.27 billion. Not surprisingly, the TDP of this new chip is down to a more manageable 130W instead of up to 150W of the older generation processors. Is the new chip more power efficient? We'll share more of those findings in our performance pages.

The other features of the processor are almost identical to the older Sandy Bridge-E compatriot. It has an integrated PCIe Gen 3 capable controller that supported up to 40 PCIe lanes. The new Ivy Bridge-E will also have up to 15MB of L3 cache. In terms of instructions sets, it supports most of the currents ones like VT-x, VT-d, VT-c, AES, AVX, SSE 4.1 and SSE4.2. But the Ivy Bridge-E chip lacks support for FMA3 instruction set that was introduced to the Haswell chips this year. Here's a look at the Ivy Bridge-E processors that are currently available at launch and how they compare with the previous generation of Sandy Bridge-E processors for comparison.

True to its enthusiast class heritage, all the current processor come unlocked for fine-tuning of their performance levels. Intel has also kept the launch prices of the two high-end processors identical to the older Sandy-Bridge E chips.

Since all the current launched Ivy Bridge-E processors are unlocked, their overclocking features are rich enough to address the requirements of high-end users. The CPU Strap option, which was first introduced with the Sandy Bridge-E processors, will allow the base clock to be increased from 100MHz without affecting the operating frequency of the PCI-E/DMI controller. 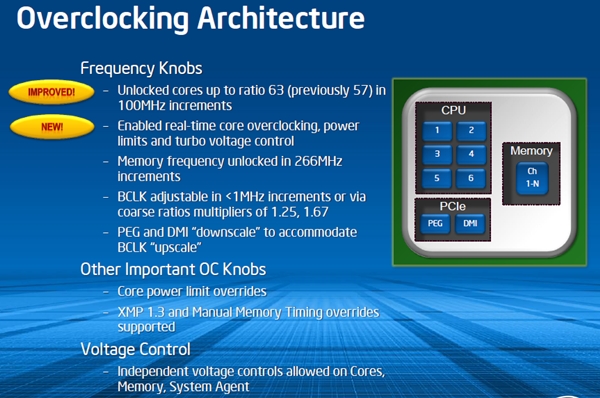 At a glance, the new block diagram of the Intel X79 chipset has been updated to show its official support for PCIe Gen 3.0 technology. In order to officially support the new Ivy Bridge-E chip, the Intel Management Engine firmware on the Intel X79 chipset has to be upgraded to the latest version of 8.1.120.1336. This means that current Intel X79 platform owners will have to wait for firmware updates from their respective manufacturers of the boards before safely progressing to purchase the new processor. Apart from this, the chipset itself sees no revision or change since it was first introduced.

While new Intel X79 motherboard marketed with the Ivy Bridge-E processors in mind will have full PCIe Gen 3.0 support, we cannot say the same for the initial batch of Intel X79 boards from the various manufacturers. At that point of time, Intel hasn't yet qualified PCIe Gen 3.0 support, but many motherboards are capable of supporting it as long as the boards also feature PCIe 3.0-compliant switching components in order to support the full 40 PCIe Gen 3.0 lanes of the new Ivy Bridge-E CPUs. As such, you'll have to check the manual and support forums for your respective Intel X79-based motherboard model to truly ascertain PCI Gen 3.0 support on your board. 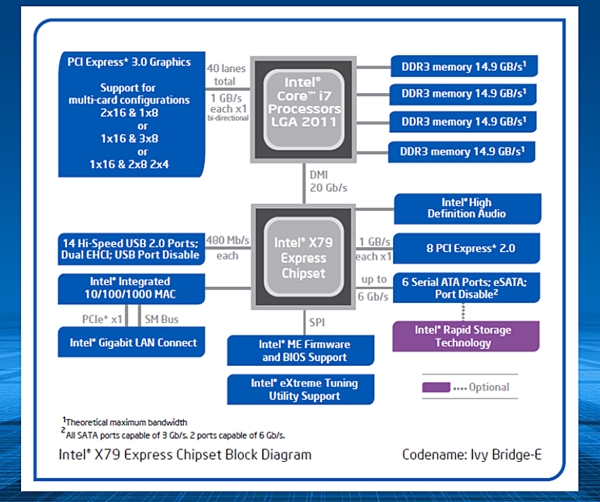