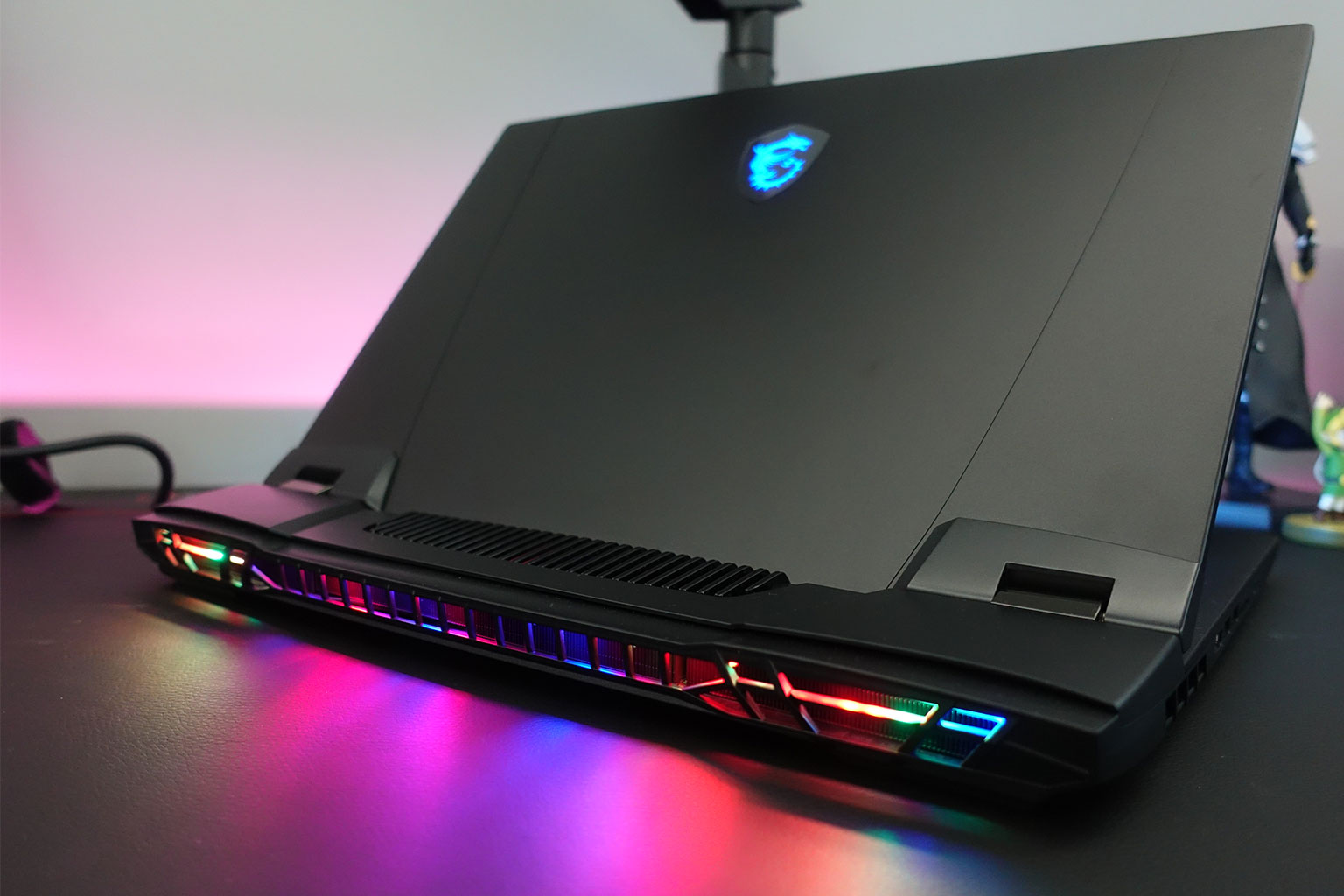 In my MSI GE76 Raider review earlier this year, I lamented how today’s newest gaming notebooks, while sleek-looking and powerful, tend to be inhibited by thermal constraints and thus, not able to perform anywhere near their desktop counterparts.

The Intel 12th Generation Core i9-12900HK mobile CPU used in the GE76 Raider, for example, may share the same model number as the desktop-class Core i9-12900K processor but comes with lesser cores and thread processing capability. Crucially, it also has a much lower TDP at 45W, as compared to the 125W on the desktop class. All these  'reductions' allow the processor to run just a little less hot but at the expense of performance.

After all, the confined spaces and less-than-ideal airflow within a notebook’s chassis meant that compromises must be made to ensure they don’t burn out or worse, become a safety hazard (remember, heat and battery don’t get along well together).

Intel’s newest high-performance mobile processor, the Core i9-12900HX, aims to bridge the gap between mobile and desktop gaming performance a little closer. But because of its formidable cooling requirements, it’s not a processor meant for thin-and-light gaming notebooks.

It’s quite literally a machine that should satisfy most extreme gaming enthusiasts. A top-of-the-line desktop-class CPU? That’s why we are here. 64GB of maxed-out memory? It’s here too. You thought 1TB of SSD storage was sufficient for a notebook? The GT77 comes with four 1TB Samsung NVMe SSD. It’s even got a 175W NVIDIA GeForce RTX 3080 Ti Laptop GPU with 16GB of GDDR6 memory.

But here’s the twist: The MSI Titan GT77 that Intel sent to us was an engineering sample, with a specification that’s not available for sale in Singapore. Hardly surprising, since the focus is centred on the new Core i9-12900HX and not the gaming notebook per se. But I would be remiss not to give my impression on the GT77, because as a desktop replacement class gaming notebook, the GT77 is pretty svelte and not like the stereotypical boxy and cumbersome designs.

Here's a quick overview of the notebook. 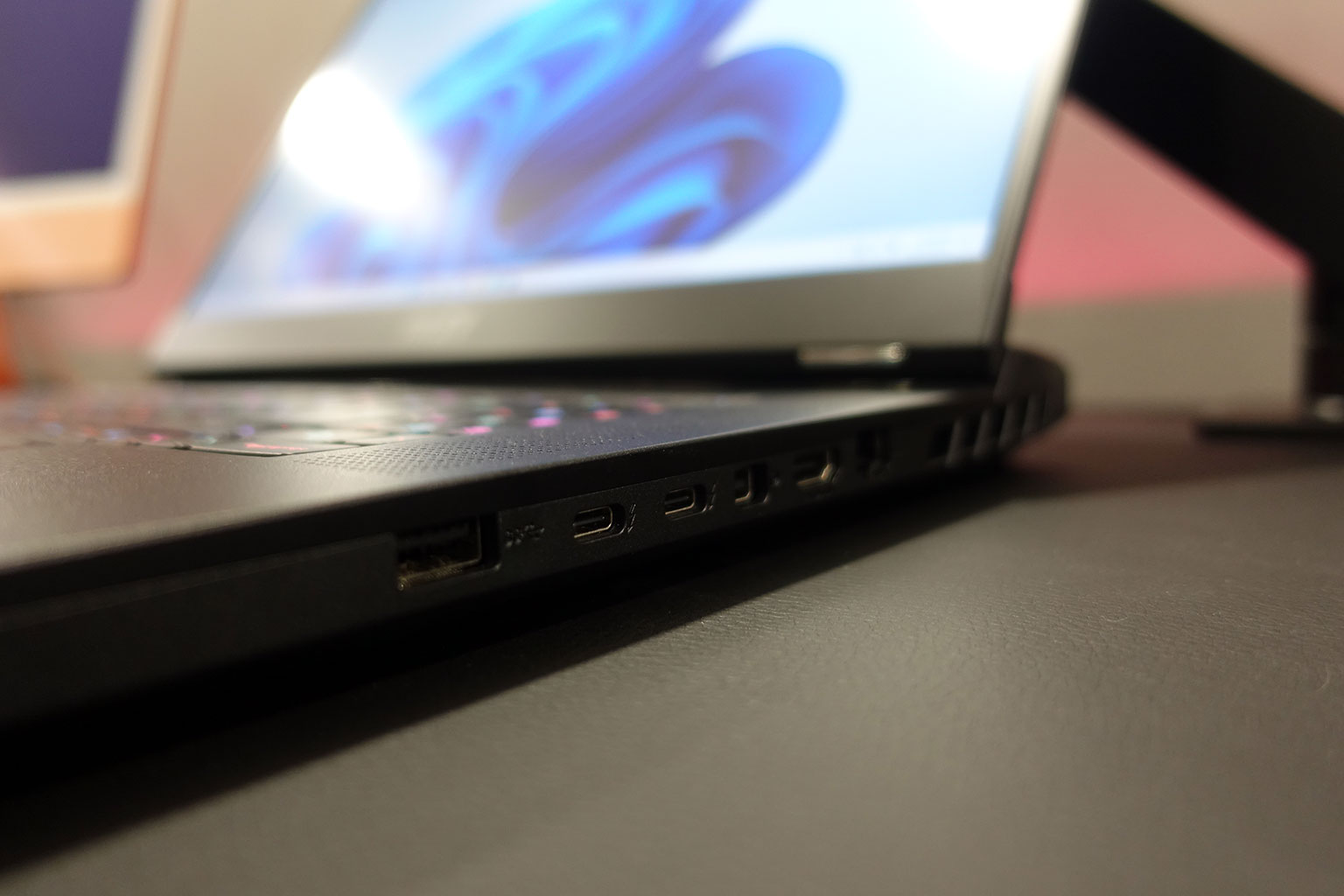 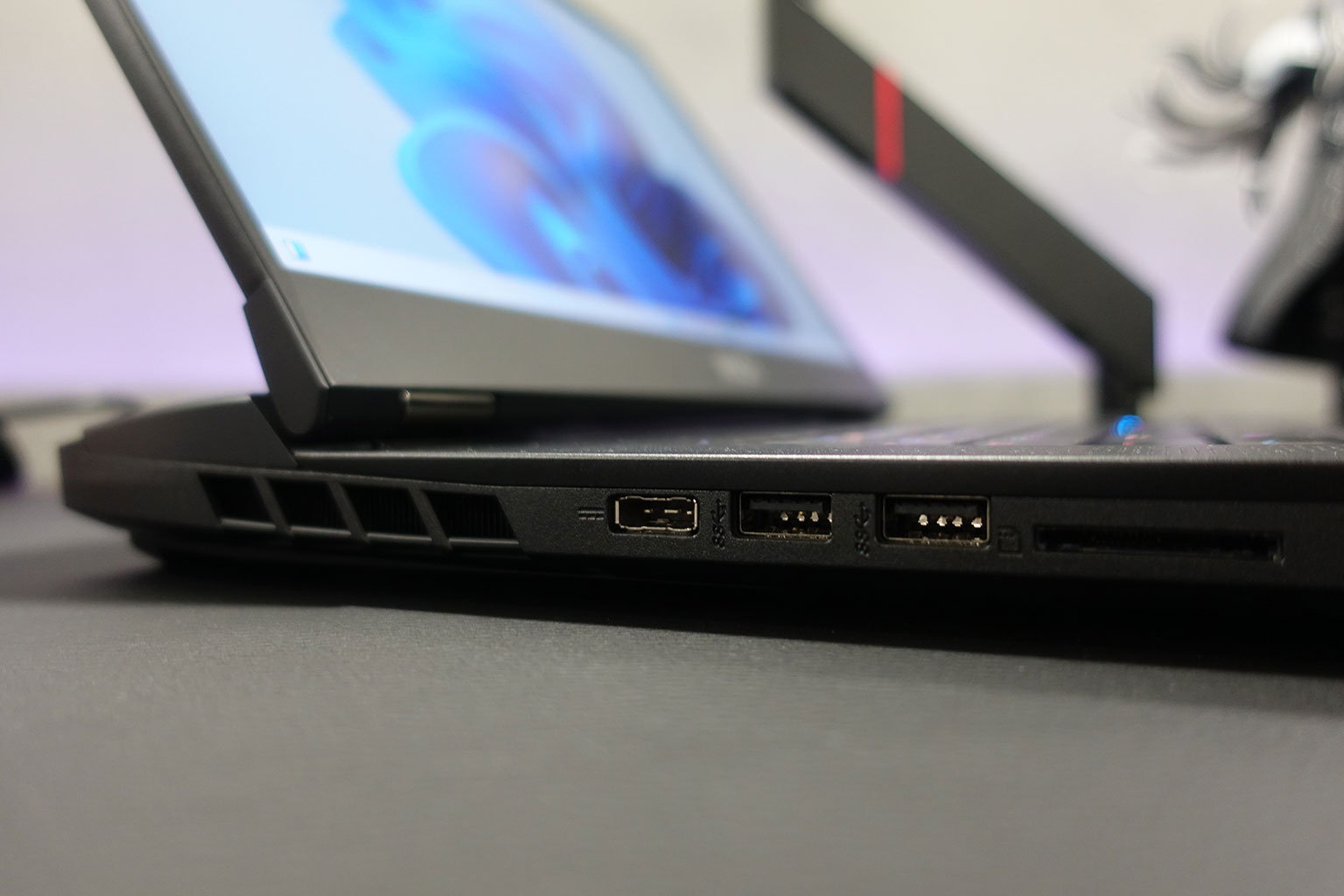 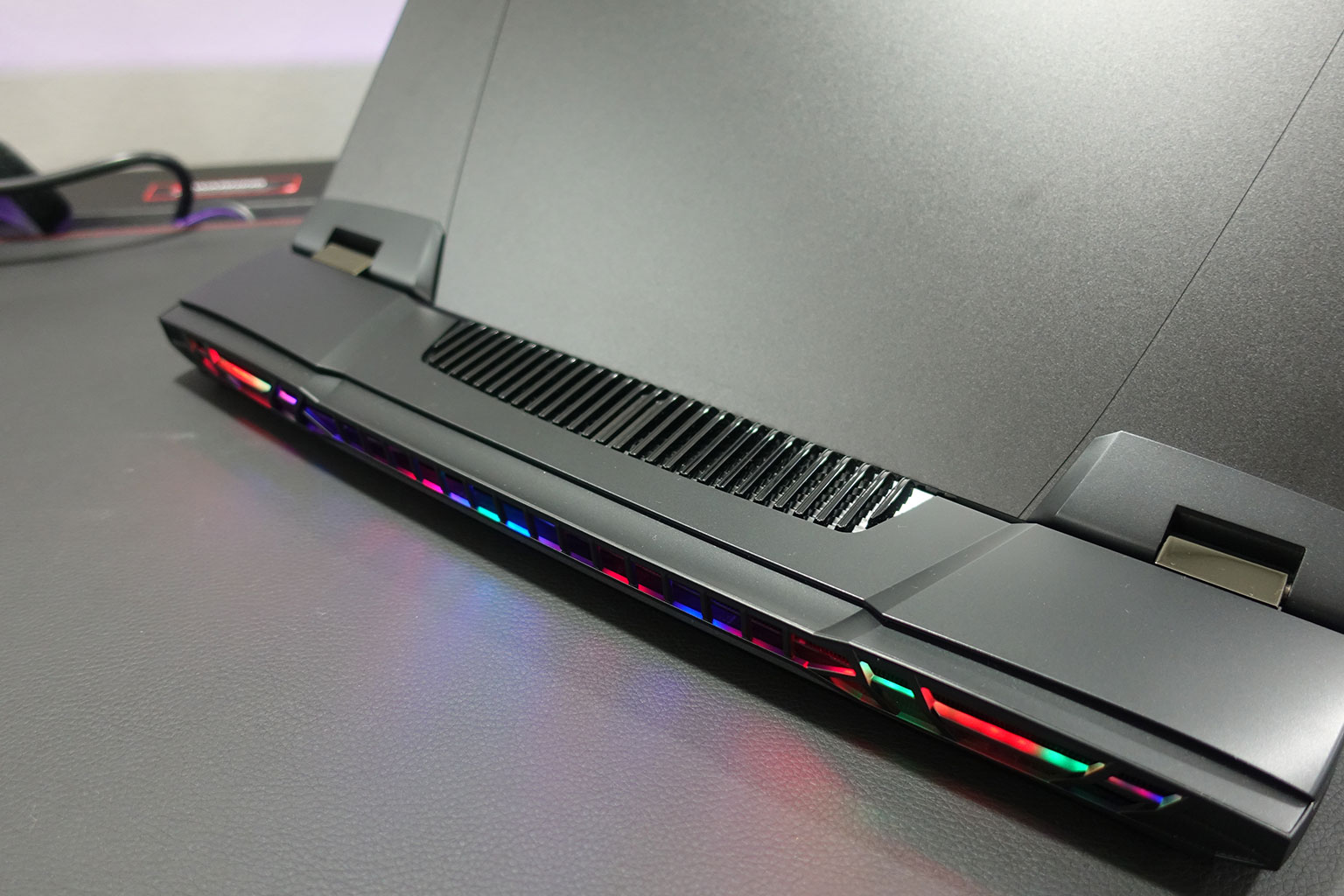 Most significantly, this means it has two more P-cores and can process four more threads than the i9-12900HK. (Editor’s note: Remember, P-cores, unlike E-cores, are simultaneously multithreaded capable or “hyper-threaded” and each can process up to two threads). On paper, the Core i9-12900HX also has more than 20 per cent higher base power and 37 per cent higher maximum turbo power, so it should offer substantially more all-around power, especially for long-running tasks. Overclockers will also be happy to know that the HX-class processors support overclocking – just like its desktop K-series cousins – but I suspect that only a handful of notebook makers (ROG? MSI?) will put this feature on their notebooks.

Last but not least, the HX-class also offers one other important advantage over the HK-class lines, and that is support for PCIe 5.0 – a key advantage once PCIe 5.0 SSDs hit the market and manufacturers start putting PCIe 5.0 M.2 slots into their notebooks. But the Titan GT77 in my hands does not come with PCIe 5.0. Instead, it comes with an impressive (and insane) four PCIe 4.0 M.2 slots that are configured in RAID 0.

For this review, I have decided to compare the MSI Titan GT77 with the MSI GE76 Raider and, of course, the existing HWZ Test Rig – all three are powered by different classes of the Core i9-12900 chip. This should give us an impression of where the latest Core i9-12900HX mobile processor stands as far as performance goes. Here’s how all three line up with their respective specifications: 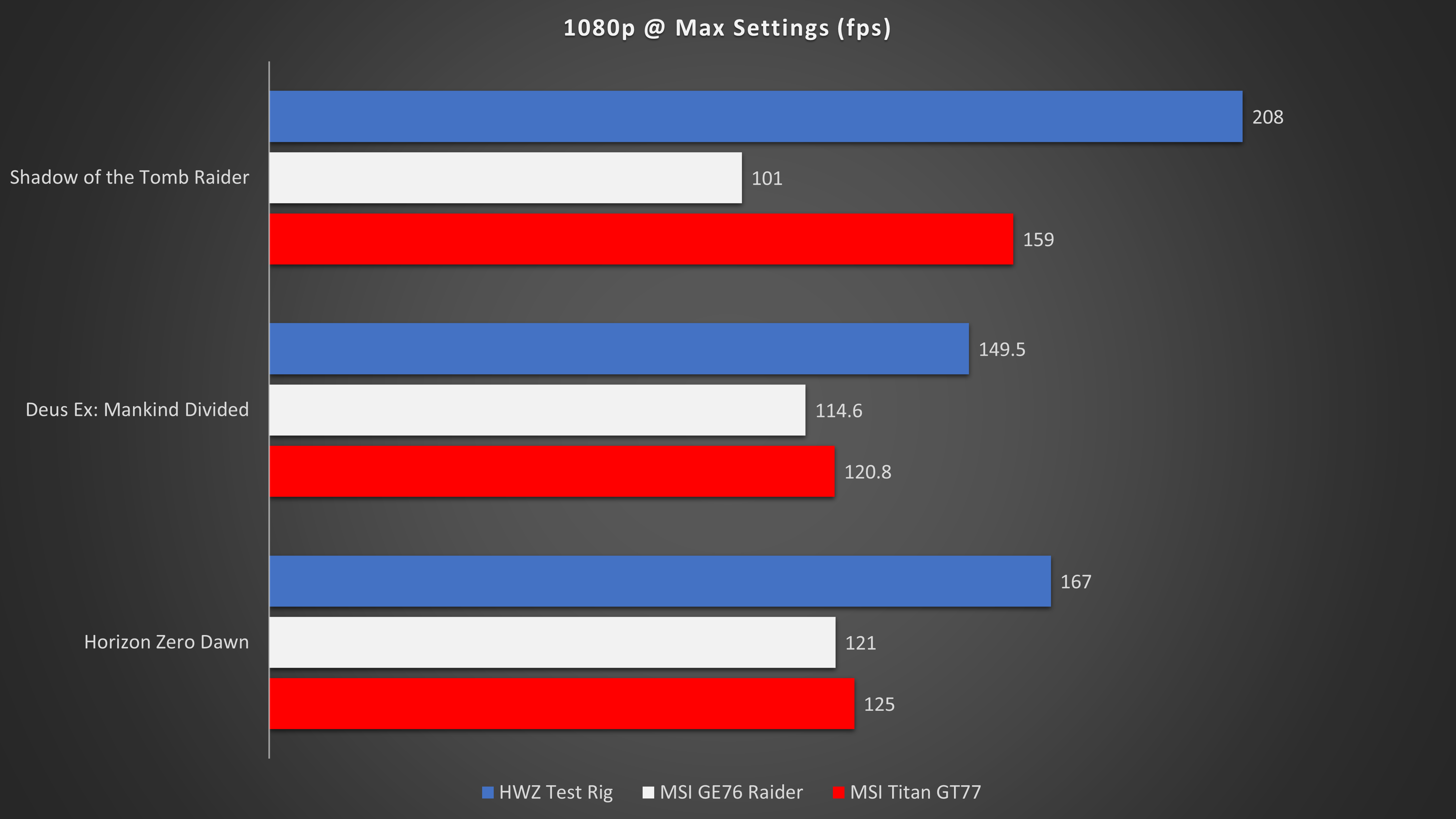 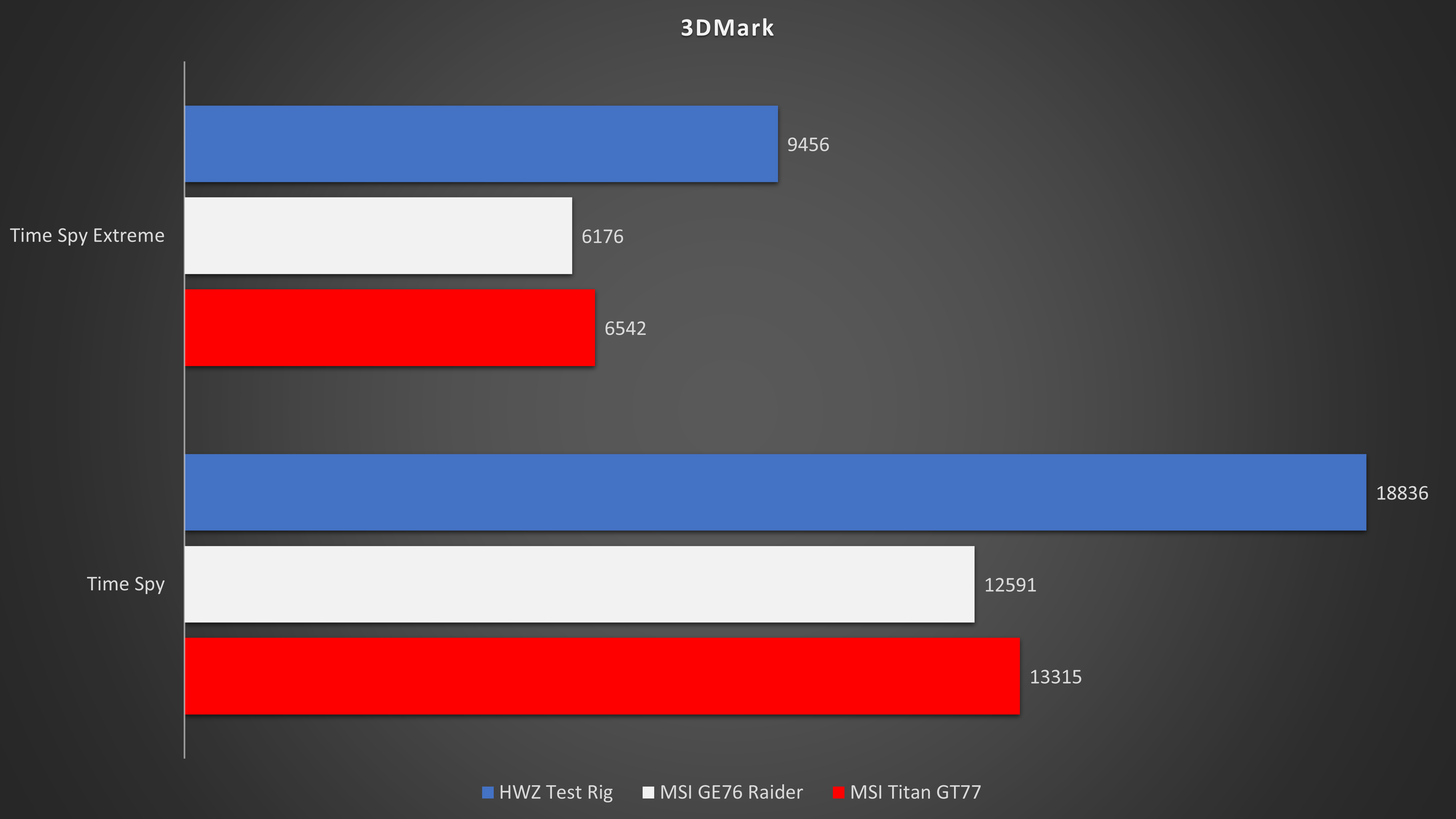 Gaming benchmarks results here are not surprising, to be honest. Although a faster Core i9-12900HX will no doubt benefit gaming, it’s really the GPU that provides most of the muscles. Running our benchmarks here at 1080p resolution is a showcase of the CPUs' respective performances, and also because our test unit's display does not support resolutions higher than 1080p. At the same time, let it be said here that anyone running games at 1080p resolution with a Core i9-12900HX and an NVIDIA RTX 3080 Ti Laptop processor is really just wasting their money away.

In any case, if you are after pure, simple, raw frame rates, then a PC – uninhabited by thermal constraints - will always be the superior gaming platform (as witnessed here by our test rig's performance). 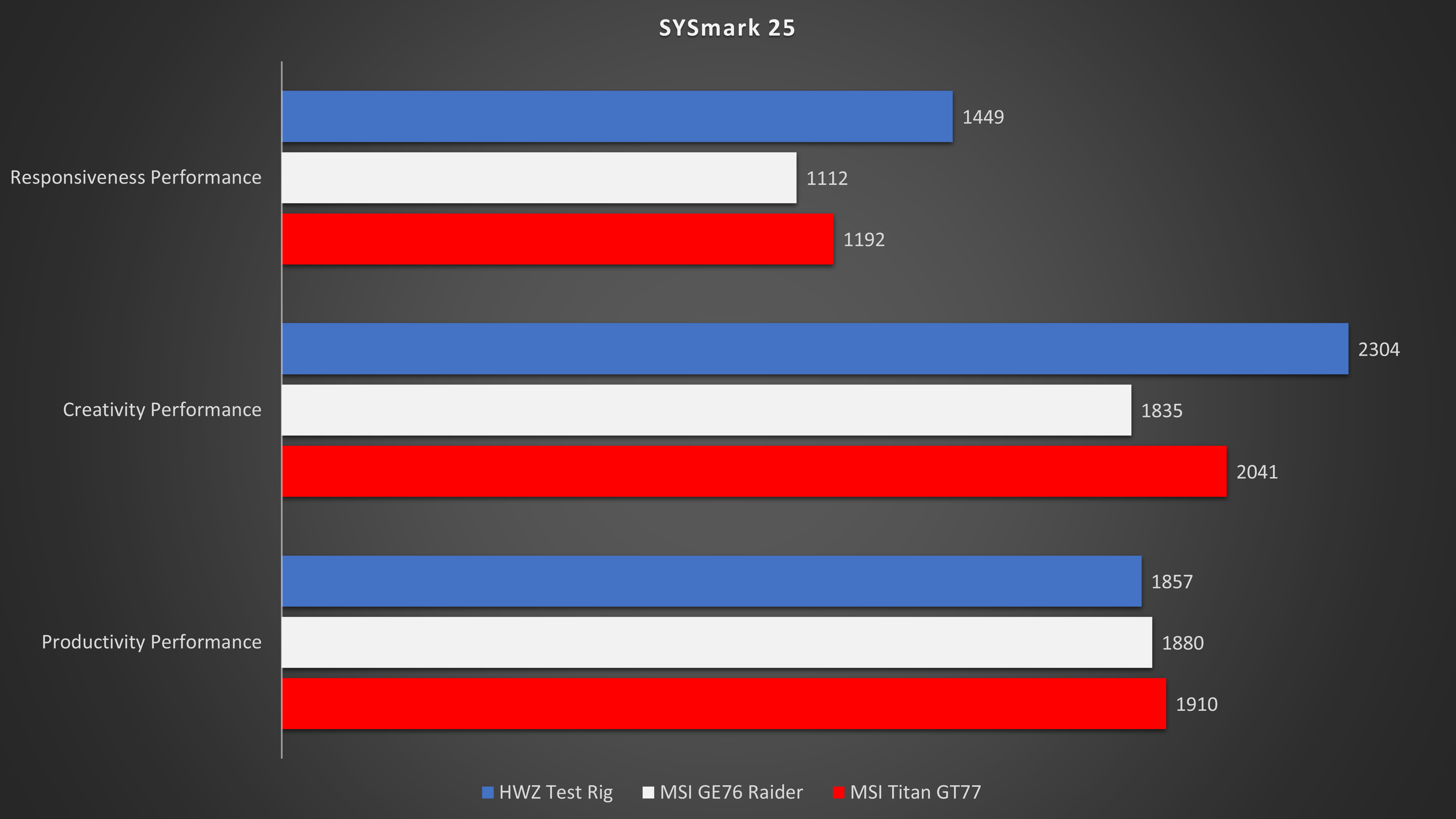 In less intensive tasks like office productivity, the MSI Titan GT77  will get the job done easily as one would expect from a desktop replacement notebook of this class. It's with Content-related tasks that we see it edging out the MSI GE76 Raider, which is to be expected. But it's still not that close to an equivalently-specced desktop. 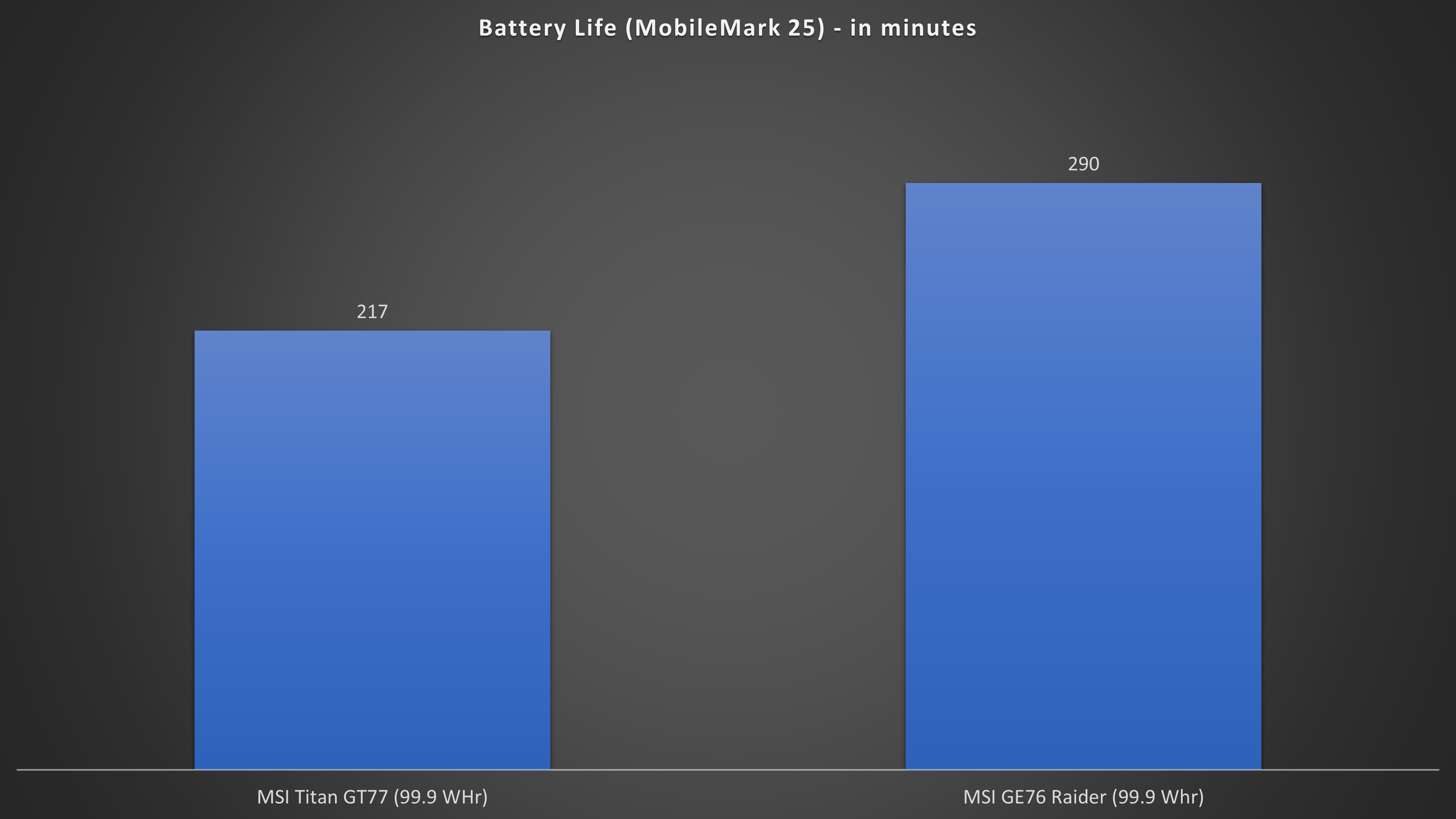 It’s not surprising to see the Titan GT77 having a poorer battery life performance compared to the GE76 Raider, despite having a similar battery capacity. Not only is the Core i9-12900HX a more power-hungry processor with a higher maximum turbo power draw of 157W than the i9-12900HK’s 115W, but the Titan GT77 also has a wee bit more powerful components that have to be taken into consideration too – such as the 4x 1TB solid-state drives (the GE76 has two SSDs).

Ultimately, battery life will always be the biggest compromise for power – more so for gaming notebooks. But you know, a desktop-replacement class notebook that can last more than three hours while unplugged from a power source? That’s not something you often hear about, until now. 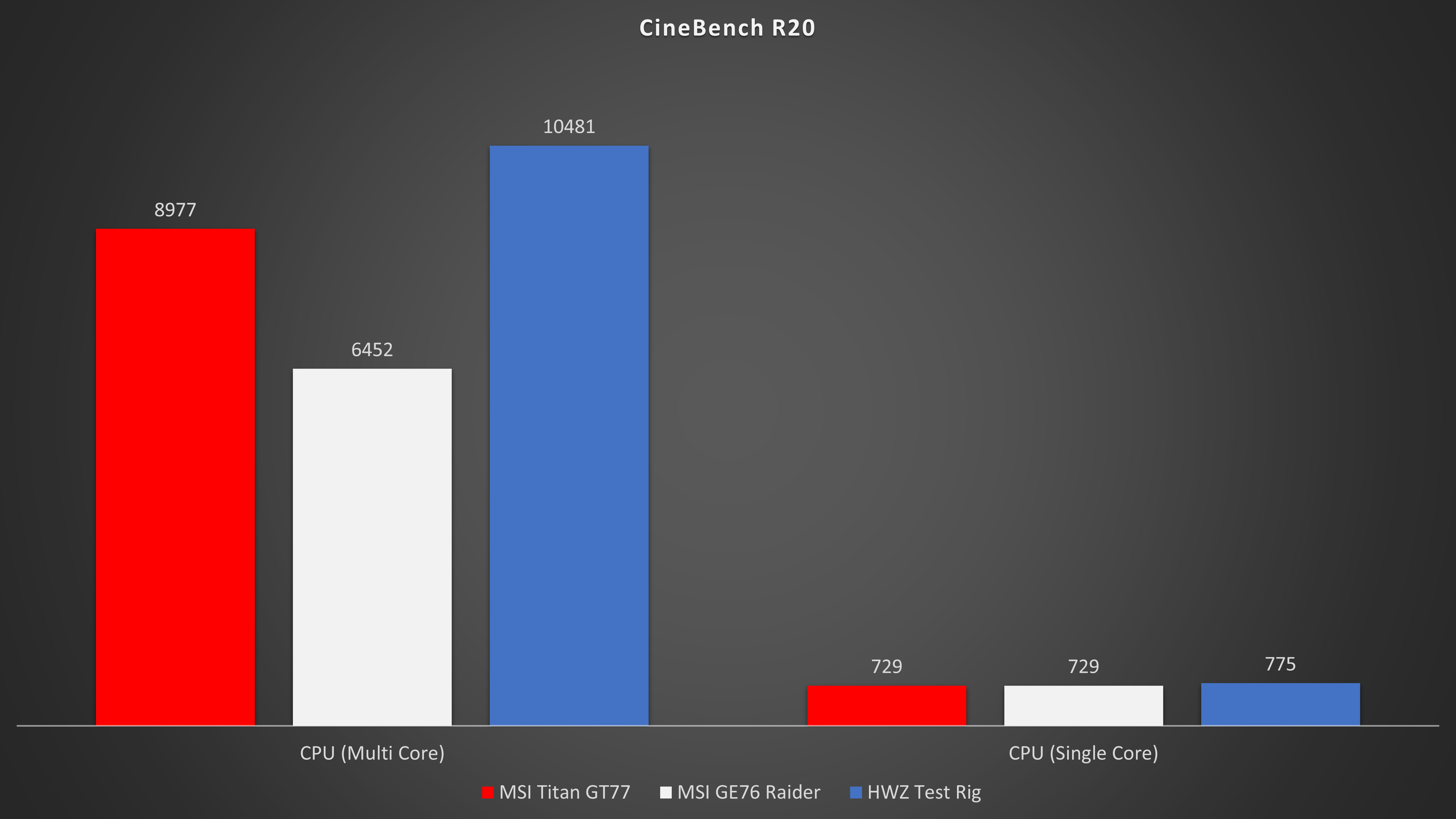 The desktop variant of the Core i9-12900K may no longer be the best and fastest consumer processor to get today (the AMD Ryzen 9 7950X just took that crown), but it still is a formidable processor for tasks like gaming and content creation. While the i9-12900HX isn’t on par with it, it still is the best mobile processor available now for multi-tasking jobs – such as streaming or video production. 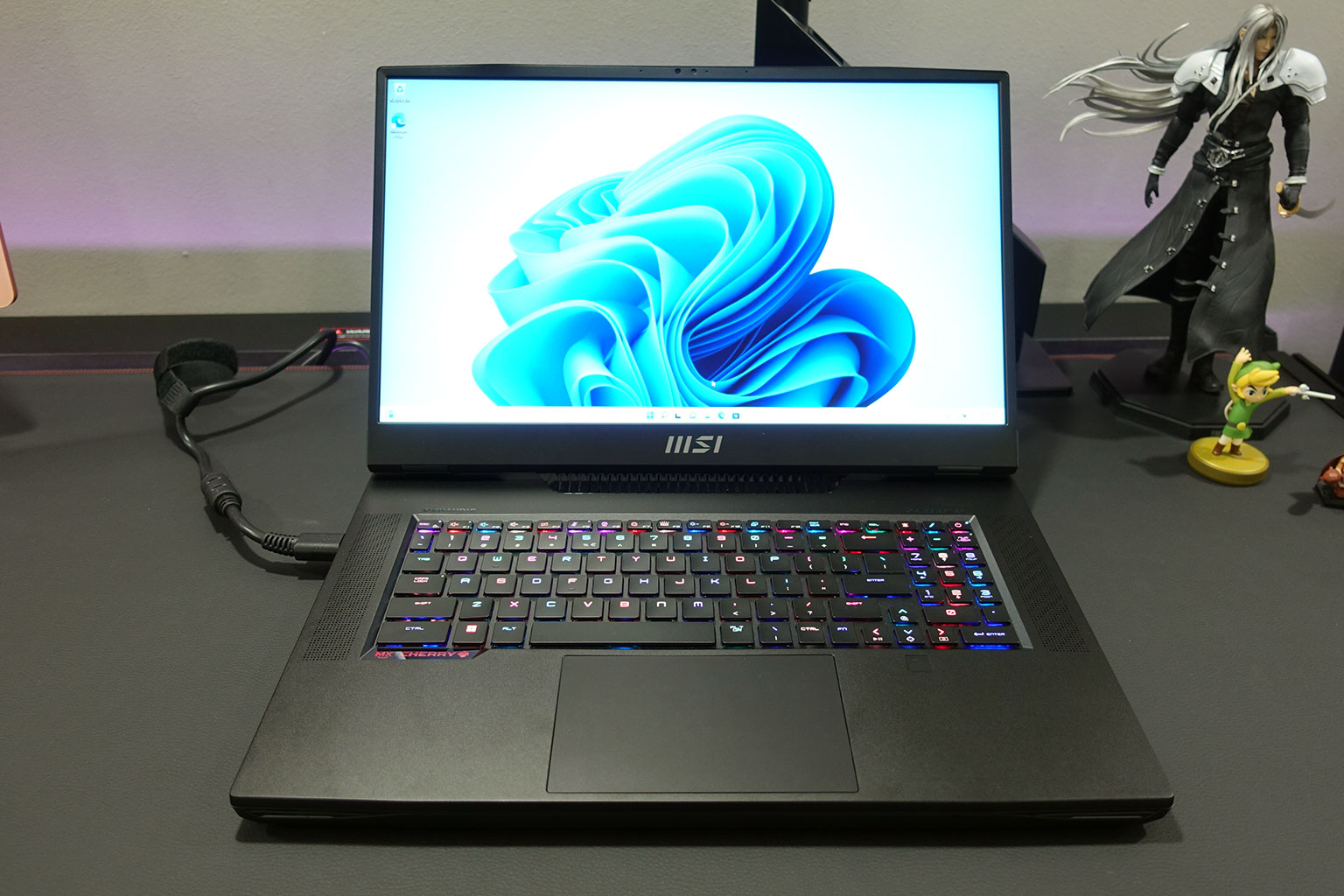 The MSI Titan GT77 is really, without a doubt, the most powerful 17-inch gaming notebook you can buy right now – thanks in large part to the Core i9-12900HX mobile processor. The numbers above don’t lie.

What’s really got me excited about the Core i9-12900HX is that it has given us a glimpse of the future of desktop-replacement gaming notebooks, which are inching closer to the performance of their desktop counterparts. Intel’s Core i9-12900HX, and by extension the HX-class processors, is great news for maximizing performance on the go.

At the same time, it’s the kind of power that’s not necessarily for everyone. When built into a desktop replacement like the MSI Titan GT77, the Core i9-12900HX caters to a niche or a very specific group of users. Think of these users as those who not only play games but also make videos, edit photos, streams or does other creative tasks and want the flexibility of mobility.

After all, such power does not come cheap. According to MSI (and Courts), the Titan GT77 with a similar specification as our test unit (except for a 4K 120Hz display and two fewer SSDs) goes for S$8,099. You could literally build a PC that could run rings around this notebook. But I also understand why some users just prefer a notebook, which does not require as large a footprint to get the job done. If extreme power and mobility (more luggable than portable) is what you’re looking for, then the MSI Titan GT77 (and its Core i9-12900HX) should be worth a consideration. Otherwise, you can also consider the excellent MSI GE76 Raider (and its Core i9-12900HK) too.

Unlike a couple of years back, we now have excellent choices to pick from.