The second generation i7 processors are using Direct Media Interface Gen 2 to communicate with the PCH. The DMI2 has a bandwidth of PCIe 2.0 x4 (2GB/s) which is approximately 20Gb/s. Their predecessors were still using Intel's QuickPath Interconnect to communicate with the southbridge chips. The 2nd generation i7 processors have a new socket LGA2011.

Another bone of contention that has been laid to rest is the fact the Sandy Bridge-E processors feature PCIe Gen 3 as its controller is 8 GT/s-capable; however, the validation of PCIe Gen 3 capable switching components amongst motherboard manufacturers seem to have started a war of words between two prominent board makers. Hence, Intel has seemingly decided to err on the side of caution and kept mum on their PCIe Gen 3 capabilities as evident in the X79 chipset block diagram. 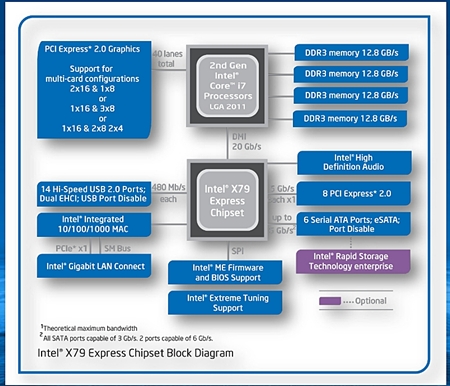 As seen from the block diagram above, there is still no official word on its support for PCIe Gen 3.0 though motherboard makers have implemented their own compliant switching components on their X79 offerings. There is no native support for USB 3.0 as well. In comparison with AMD FX990, its storage options are similar, if not even worse than its archrival. Thankfully, most boards more than make up for this with third party controllers and other options.

We have covered a fair bit of news and even done previews for Intel X79 motherboard offerings and availability. For your follow-up, we've rounded them up here:-

Intel's Own - The Intel DX79SI Motherboard

This board features the Intel Express X79 chipset and it is currently the only X79 board we have observed to included terse worded instructions on its LGA2011 CPU socket. It instructs on which of the two latches should be moved first when removing or mounting the processor. In our preview article for the MSI X79A-GD65 (8D), we took a close look at the LGA2011 CPU socket paying special attention to the two latches. The instructions on the other boards we have previewed were pictorial in nature, we naturally took preference to instructions in writing. 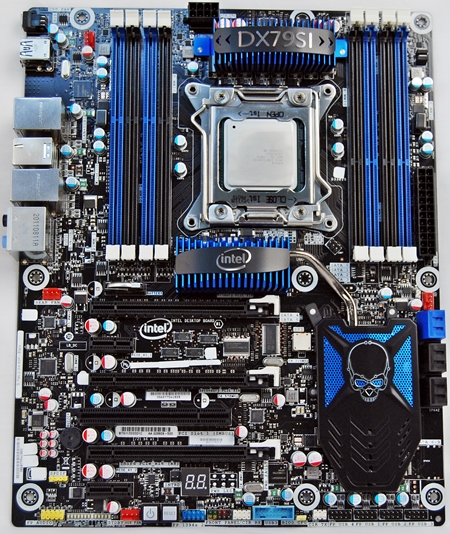 Notice the gap between the USB 3.0 ports and the Gigabit LAN connector resting on top of the pair of USB 2.0 ports? We are left wondering what was left out by Intel.

As a confirmation of rumors, Intel will not be shipping CPU coolers with boxed and retailed versions of the Sandy Bridge-E processors. It was speculated that the chip maker had intentions to reduce manufacturing costs; however, the most logical explanation was that Intel has its intention of promoting its own brand of cooling solution.

In collaboration with Asetek, a leader in liquid cooling solutions, Intel is offering its own brand of sealed liquid cooling thermal solution, the Intel Active Thermal Solution RTS2011LC. This customized cooling solution is compatible with LGA2011, LGA1366, LGA1155 and LGA1156 processors. According to Intel, its pump, cold plate and water block are integrated thus improving the reliability of this kit. The estimated retail price of the cooling system is US$100. 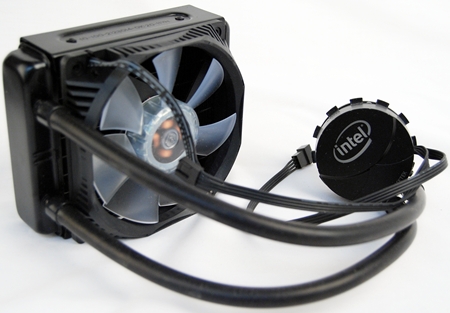 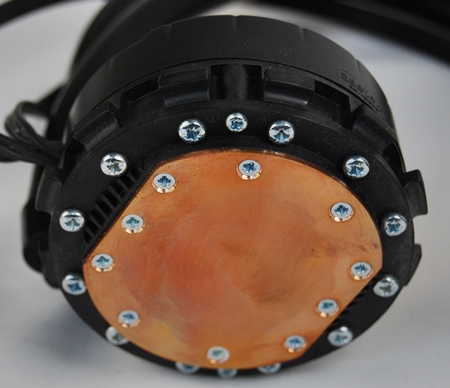 The RTS2011LC bears some resemblance to the Corsair Hydro H50 CPU Cooler in terms of its build and simplicity in liquid cooling engineering design. It is also manufactured by Asetek and as such the apple does not fall too far from the tree.

For rig builders who prefer air cooling, Intel also offers its own CPU cooler from about US$20 that is future proofed as it is compatible with Sandy Bridge-E as well as Ivy Bridge processors. It is targeted at business and corporate users who do not demand the extreme cooling solution of the RTS2011LC. 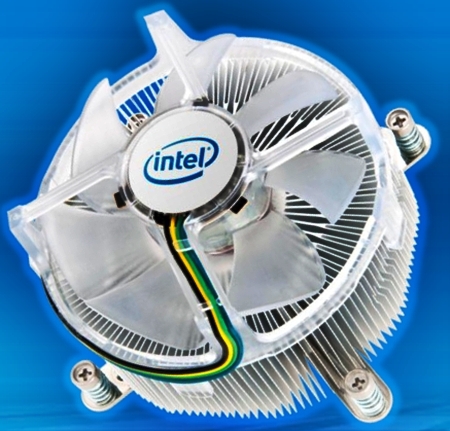