While some tech sites cast doubt on Bapco's SYSmark benchmarking suite, we see no reason not to use it. It's clearly one the most useful benchmarking suites out there that juggles several real life applications while introducing pauses and wait states that mimic real usage patters as best as a repeatable script can over several productivity and content creation tasks. Although the 2007 Preview edition is growing a bit old, we're still continuing this a little longer while we gather enough test results on newer editions before retiring the older benchmark.

Speaking of results, the new kid on the block was hardly any faster than the compared processors and platforms in this test. For some technical reason, the AMD FX-8150 platform failed to produce results. The Core i7-3960X outperform AMD's Phenom II X6 1100T by almost 39% in terms of overall rating. By utilizing memory modules of higher clock frequencies, we eked out a slight increase (approximately 3%) in overall performance - pretty much within our usual expectations. While that might not have seemed like much at all, we peered at the detailed set of results and noticed that the video creation test suite recorded a much more notable 7% increase in performance when using DDR3-1600 over DDR3-1333. So while general users may not see any benefits to splurge on more expensive memory, certain usage scenarios and workloads will pay off. You just need to identify what you spend time most on the PC and justify if the extra spent on the memory is worth your while.

In any case, SYSmark has shown that the new platform using the same memory frequency as the other testbeds is about on par with the existing Sandy Bridge based Intel Core i7-2600k dual-core processor when tested with this benchmarking suite. This should set the expectations straight as not anybody can benefit from a workstation class platform. The results breakdown however shows something notable - the new platform excels in 3D and video content creation tasks. In these tasks, the Core i7-3960X is about 20% to 30% speedier than the Core i7-980X and the Core i7-2600K. So take note content creators! 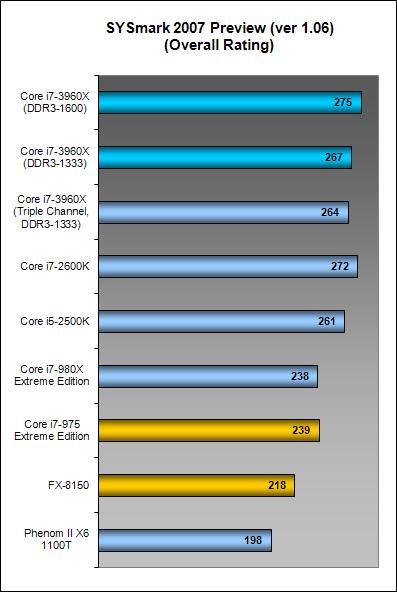 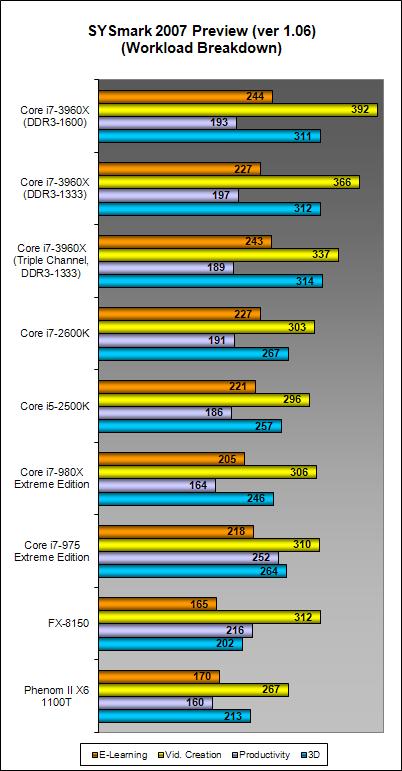