To recap, the Core i7-3960X Extreme Edition is Intel's new top of the line six-core processor capable of crunching up to 12 threads simultaneously with HyperThreading technology just like its predecessors, the Core i7-990X and i7-980X. They are even based on the same 32nm manufacturing process technology and sport the same 3.3GHz base clock speeds (though the 990X runs at 3.46GHz).

What's new however is the upgraded microprocessor architecture taking after the Sandy Bridge architecture in some aspects and hence it's known by the codename of Sandy Bridge-E. This overhaul brings the newcomer some serious new features like a quad-channel DDR3-1600MHz capable memory controller, an on-die 40-lane PCIe controller that can operate at PCIe 3.0 speeds, supports various flexible PEG slot arrangements, a huge 15MB L3 cache  juggle all that data going in and out of various functions of the CPU, and new instruction sets to support SSE 4.2, AES and AVX instructions.

What you have in the end is a massive 2.27 billion transistor chip, which is double the transistor count of the previous top of the hill processor, the Westmere base Intel Core i7-990X and i7-980X. To an almost similar extent, the die size too has almost doubled its predecessor. To support this new monster chip and its massive LGA2011 package, you'll need a brand new platform based on the Intel X79 chipset. Clearly, this is no ordinary processor for tweakers and enthusiasts, but it's a processor architecture developed for the workstation market just as how the Westmere did in the past. On the internet, you'll find sources pointing to the Intel Xeon E5 processor launch in the first quarter of 2012, which is based on the Sandy Bridge-EP architecture that's identical to the reviewed Sandy Bridge-E, except that it supports dual processors using QPI links on the Patsburg chipset. The combined workstation platform is codenamed Romley. 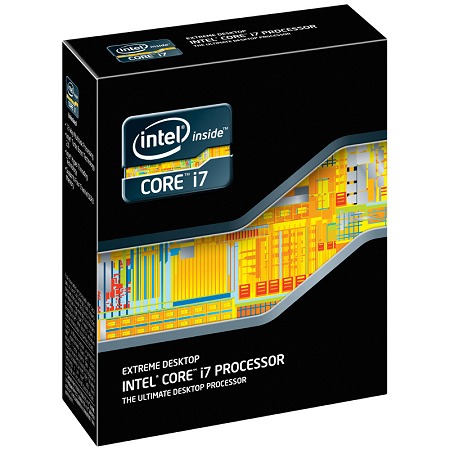 We got to agree that the Core i7-3960X is a serious piece of engineering to address the enthusiast home workstation market segments. But what exactly is its net benefit? From our various tests, we can safely conclude that if you dabble solely in 3D, graphics or video content creation tasks and video encoding workloads, you stand to gain from 15% to 30% improvement over the next fastest Intel competitor.  Focusing on the top mainstream enthusiast Core i7-2600K processor, it was generally not much faster than the Core i7-3960X Extreme processor in most test scenarios. In some of these more demanding tasks, at most you can see a 15% to 30% lead. When compared to the old Westmere Core i7-980X processor, you generally get a 20% to 30% speed boost throughout our test suite.

If only small amounts of your time is spend on these demanding workloads, it doesn't make sense to buy into a Sandy Bridge-E based processor. The bigger and more demanding the workloads, the more you get out of this processor.

What left us in discomfort is the hefty price tag of the CPU itself which is approximately S$1,275 (a direct cost translation from the US pricing). We assume that an adequate Intel X79 chipset based motherboard with 4 or more DIMM slots and 3 PCIe slots will cost no less than S$400, which is a hefty price to pay. Plus you'll also need to fork out more cash for a cooling solution with the cheapest air cooling option that will cost about S$40 from Intel.

Despite the processor and platform's workstation roots, why Intel is pitching this to power users and enthusiast gamers with big pockets is because of the processor's ability to work with massive multi-GPU scaling. This group of users are likely to have three monitors or more and link up multiple graphics cards to power the many more pixels required to be crunched to address ultra widescreen gaming. If they dabble with 3D gaming, then the workload nearly doubles again and you'll need serious graphics horsepower. While you could get a somewhat equal level of support from the Nehalem and Westmere processors on the Intel X58 platform, their technology is now nearly three years old and we've seen how much more efficient and faster the new Sandy Bridge-E is. The new processors offer even more PCIe lanes and supposedly are even Gen 3 ready. So if you buy into the "future-proofing" concept, this new platform can be seen as an investment of sorts.

Yet another target audience for the Intel Core i7-3960X are the overclockers and extreme power users who do not mind spending for their hobbies and paying extra for liquid cooling solutions. These users will likely also splurge on memory kits with higher overclocking overheads as this Sandy Bridge-E processor is just screaming to be overclocked. Its CPU Frequency Multiplier comes unlocked, making overclocking rather straightforward by setting its CPU ratios and fine-tuning its Bus Clock Ratio. This makes investing in a good cooling system as well as memory modules with higher rated clock frequencies natural choices to push the Sandy Bridge-E CPU to higher levels.

In short, just like the Intel Core i7-980X, this new Core i7-3960X processor is ideal for a select target group of users who spend a lot of time creating intense multimedia content and individuals with very deep pockets to power their passion like indulging in an extreme gaming rig or are keen overclocking enthusiasts toying around with the latest and greatest. For early adopters of the Nehalem or Westmere microprocessor architectures, the Intel Core i7-3960X Sandy Bridge-E processor may be the upgrade your system is sorely missing. To save half the cost of the processor, you do have another option - get the Intel Core i7-3930K as it's not much different.