While idling, the Ivy Bridge processor's all-new Tri-gate (3D) transistors technology that promised to lower power consumption by up to 50%, ensured it sipped the least power. With heavier workloads such as the 3DMark Vantage CPU test, we did see its power efficiency at work, with its power rating about 50W lower than the Intel i7-2600K with its older platform. While it didn't deliver the promised 50% power saving, we were still fairly impressed by its power efficiency as it managed up to 20% lower measured power draw. Interestingly, the DDR3-1600MHz run incurred less power usage than at DDR3-1333MHz. The compared Core i7-2700K was using a platform similar to the Core i7-3770K and that caused its power ratings to differ from the expected profile of the older Sandy Bridge processors compared. Yet another interesting point was the Core i7-3820's low power consumption which rivaled Ivy Bridge.

For SPECviewperf 10 when setting the workload for four threads, the Intel i7-3770K processor performed the best with lowest sustained peak power rating of only 185W - better than Sandy Bridge and Sandy Bridge E processors by a notable margin. Power savings of the new platform vs. the older platform was close to 30%! 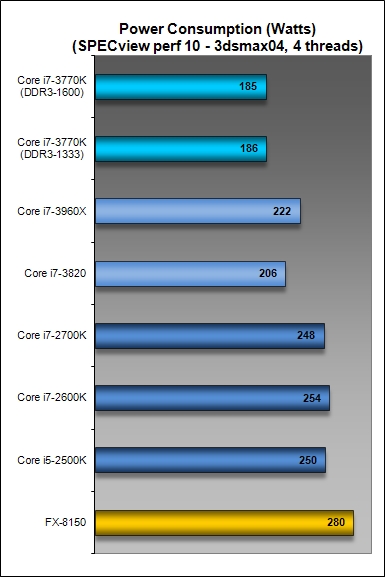