We managed to get hold of an Intel Core i3-4150T processor that hails from the ranks just below the Core i5 family.

Speaking of low-power requirements, the new Core i3-4150T processor has a TDP of 35W. Based on what we currently know about the new chip, its older Haswell counterpart is the Intel Core i3-4130T. The new Core i3 chip is almost identical to its older counterpart, save for its very slight bump in clock speed to 3.0GHz.

We utilized the ASUS Z97-Deluxe motherboard with the new Intel Core i3-4150T processor. The new board features the new Intel Z97 chipset, whose main feature is its support for the new PCIe M.2 storage that offers speeds of up to 67% faster than the current SATA 6Gbps technology. We know the setup of a low-end processor with a high-end motherboard seems like a mismatch, but this is the combo we received for our trials.

Just for fun, we've also included performance figures from our Intel Core i7-4770K test rig, which utilized the MSI Z87 MPower Max motherboard. With regards to the memory modules, we used a pair from our DDR3-2133 shootout, the Crucial Ballistix Elite Series 8GB (2 x 4GB) memory kit. As they are rated at DDR3-2133, we ran one set of results down-clocked to DDR3-1600 (the officially supported memory speed for the Haswell processor) and another set of results at DDR3-2133 to see how the integrated graphics performance varies (if any) with memory bandwidth improvements.

The two AMD APUs were chosen to represent the other camp. First, the AMD A10-7850K APU (Kaveri @ 3.7GHz with Turbo to 4.0GHz) features the AMD Radeon R7 graphics core, which has 512 shader cores that are clocked at 720MHz. We also included its predecessors, the AMD A10-6800K (Richland @ 4.1GHz with Turbo to 4.4GHz). The APU features the AMD Radeon HD 8670D graphics core which has 384 Radeon cores that are clocked at 844MHz. Both APUs have native support for DDR3-2133 memory modules. Therefore, we expect the APUs to do well, particularly the A10-7850K APU for Thief gaming benchmark as it has native support for the Mantle API. The motherboard used was the Socket FM2+, ASUS A88XM-A. The details of each test rig are as follows:-

We have included the Cinebench R15 for our artificial benchmarks. To determine the support for both DirectX 11 and Mantle APIs, we roped in Thief, to ascertain how the IGPs handle the game, under its normal and low pre-settings. Last of all, we tested the multimedia capabilities of the chips using Handbrake video encoding software and Blu-ray playback, with an updated version of PowerDVD. The following is the full list of benchmarks used to test the processors' overall performance: 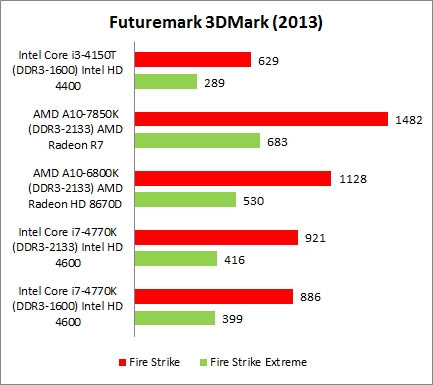 Drawing from our past experiences with the integrated graphics cores of AMD APUs, they are known to give their Intel HD Graphics 4000 series competitors a good workout. For the Thief benchmark, the AMD A10-7850K Kaveri APU pulled well ahead of the rest; and we noticed that when we cranked up the pre-settings to Normal, the average frame rates recorded by the Intel camp fell into single digits readouts. The extremely strong performance by the Kaveri APU can mostly be attributed to its native support for the Mantle API. Therefore, we turned our attention to the 3DMark (2013) benchmark for a more level playing field where the top-end AMD Kaveri also pulled ahead from the rest. The low-end Intel Core i3-4150T was simply no match for the rest of the processors.

In terms of CPU utilization for our Blu-ray playback, the Intel Core i3-4150T processor had the worst showing because it is a dual-core processor without HyperThreading. However, it's only marginally worse than the rest of the compared processors. 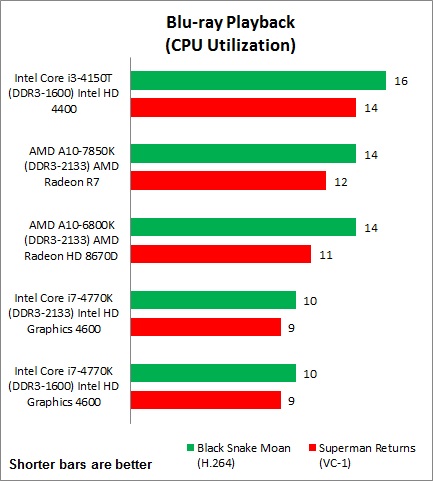 The Cinebench R15 benchmark forces all CPU cores to render a 3D scene, and according to its publisher, it is able to use up to 256 processor threads. Therefore, we can see the strengths of the older quad-core Intel Core i7-4770K, with its HyperThreading feature. The Piledriver CPU cores of the AMD Kaveri chip weren't as efficient as the older Bulldozer cores of the A10-6800K Trinity APU. As expected, our dual-core Intel Core i3 CPU has the lowest score. 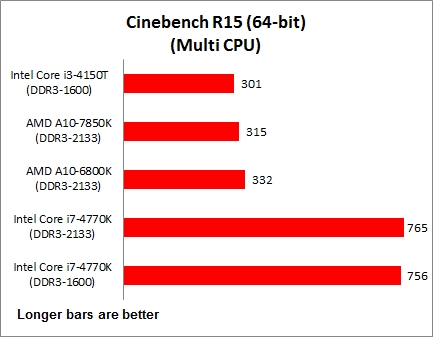 We can see that the time taken to encode our test video file by Handbrake is determined by the processing strengths of the CPU cores. As mentioned above, due to its lack of processing cores, the new Intel Core i3 CPU took the longest time; a grand total of 152.3s to complete its task. 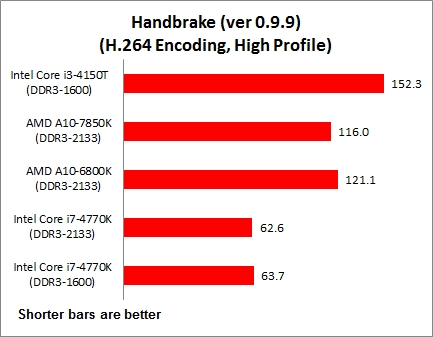 Generally speaking, in comparison the AMD APUs, the Intel chips were more conservative in terms of power consumption, and this observation attested the power efficiency of the Haswell architecture. Fortunately, the Kaveri APU from AMD made great strides and it's able to rival Intel's power consumption stats, while delivering a lot better graphics performance. 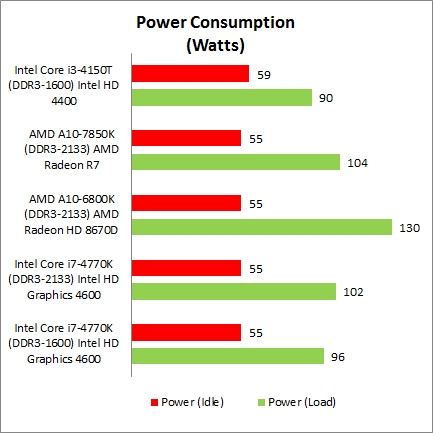 Priced at a discount to the high-end AMD Kaveri and Trinity APUs, the new Intel processor can be seen as a cheaper alternative to the APUs. As witnessed from the power consumption test, the Core i3-4150T CPU also drew less power than the APUs. Despite its lackluster performance, the Intel CPU will garner support from system builders looking to build a budget Haswell Refresh desktop system for mundane office productivity tasks or just a simple HTPC.

To reiterate, the AMD A10-7850K APU has a launch price of US$173; while the Intel Core i3-4150T processor is priced at US$113. Given the vastly better graphics performance of the AMD counterpart, most people looking to build a good all-round system will not mind forking out slightly more dough. As seen in our results analysis, the AMD A10-7850K Kaveri APU is ideal for building an entry-level gaming system without spending more for a discrete graphics card.