While we mere humans have to conform to our natural biological clocks, microprocessor giant Intel - the Chipzilla - follows Silicon Cadence (also known as tick-tock), a strategic time line designed to introduce new microprocessor technology and manufacturing processes approximately every two years in a continuous effort to maintain Moore's Law. And according to the powers that be, the time has come once again for a new tick to last year's tock.

What we're talking about is the official launching of Penryn today, the successor to 2006's Conroe processor based on the revolutionary Core microarchitecture. Penryn is the codename for Intel's first 45nm processor family and in the coming months, should replace the current Conroe based Core 2 processors in all market segments as Intel's flagship product. In case you haven't been following our coverage of Penryn and Intel's 45nm process technology, we recommend that you first check out our previous preview articles titled "First Glimpse of Intel's 45nm Process Technology " and "Benchmarking Intel's 45nm Penryn ". These two articles should get you acquainted with Intel's new 45nm High-k Metal Gate process technology as well as some teasers into early Penryn results. 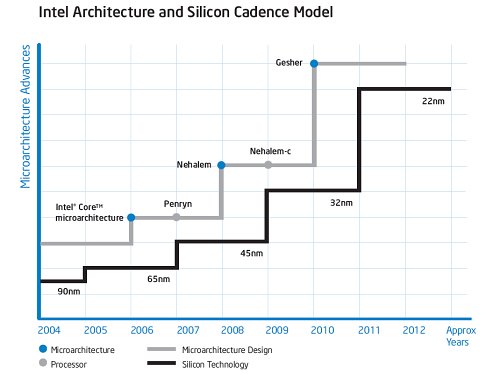 One important fact to note is that Intel has been continuing its trend of microprocessor development based from mobile technologies - which is where the Core microarchitecture had its roots. So to clear things up a little, Penryn is commonly used as a blanket codename for the new 45nm processor family, but it is also the codename for the mobile CPU. In the desktop space, the dual-core and quad-core Penryn processors are codenamed Wolfdale and Yorkfield respectively. Since Penryn is essentially still sharing the same microarchitecture as the Conroe, retail processors will retain the Core 2 nomenclature. 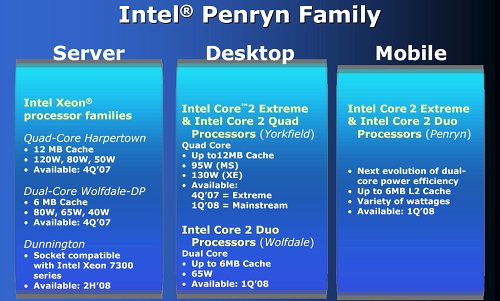