Note: This review was first published on 20 October 2022. 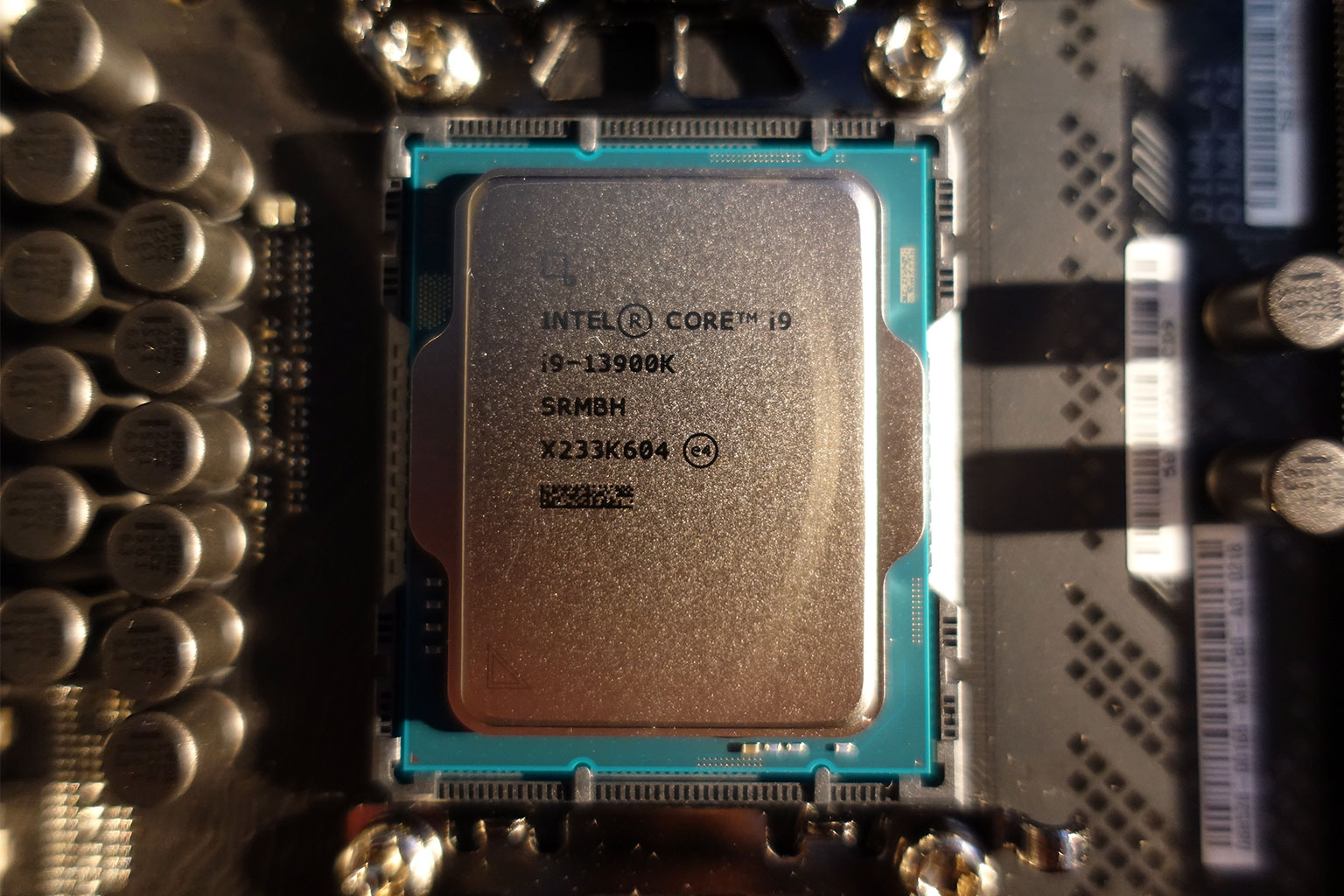 As 2022 draws to a close, let’s remember this year as an exciting – and expensive – one to be a PC enthusiast and gamer, thanks in large part to a slew of CPU and GPU flagship launches that offer fantastic generational leap in performance.

Intel has been playing catch up to AMD over the past years, and the Core i9-13900K – also its fourth flagship processor in as many years – comes at the back of last year’s 12th Gen Core i9-12900K’s success, where its superior gaming performance and hybrid core architecture gave AMD Ryzen series competition again..

The 13th Gen Core aka Raptor Lake is Intel’s answer to AMD’s latest Ryzen 7000 series of processors, and is yet another refinement of their 10nm process node, also known as Intel 7, and the performance hybrid architecture that debuted with last generation’s Alder Lake chips. AMD’s Ryzen 7000 series’ Zen 4 architecture, on the other hand, is based on a 5nm process.

Intel's design philosophy going into Raptor Lake was to improve both its frequency headroom and its multi-threaded performance rather than creating a whole new architecture. In short, Raptor Lake has more of everything compared to Alder Lake’s - including faster P-cores, more E-cores, more L2 and L3 cache, and faster DDR5 support. However, the underlying architecture and technology remain the same.

For the full deep dive, I do recommend that you read our Intel 13th Gen Core feature before reading on.

With a TDP of 125W, going up to 253W, the Core i9-13900K consumes a lot of power and will require good AIO cooling – ideally one with a 360mm radiator. There’s also a new chipset, the Intel Z790, that launches together with the new processors. But thankfully, Raptor Lake processors are backward compatible with last year’s Z690 chipset so PC enthusiasts have one less painful upgrade to pay for. To get a recap of what to expect out of the Intel Z690 chipset, head over here, which also has PC building considerations.

Although the Z790 chipset is a relatively minor upgrade over the Z690 – there are really no major differences – it does come with expanded connectivity (it has 8 more PCIe 4.0 lanes, for example) and works out of the box with Raptor Lake processors (Z690 boards will require a BIOS update). Interestingly, Alder Lake aka last year’s 12th Gen processors will also work with Z790 motherboards.

I think Intel is on to something good here, when compared to the painful years between the 9th to 11th Gen Core processors, where backward or even forward compatibility was non-existent and Intel customers were “forced” to buy a new motherboard for each generation of CPU upgrade.

It’s also worth mentioning that the AMD Ryzen 7000 series requires a new chipset (600-series) with a new AM5 socket and so isn’t backward compatible with older AM4-based motherboards. But the AM4 socket has been in use in an assortment of Zen-based family of CPUs and APUs for more than five years now, and it's commendable of AMD to have stuck with the socket for eight chipset models.

I’m crossing my fingers for both AMD and Intel to stick with their respective AM5 and LGA 1700 sockets for many years to come.

Thanks to ASUS ROG, we got the ROG Z790 Maximus Extreme motherboard to pair with the Core i9-13900K processor for our benchmarks. Here are some photos of it: 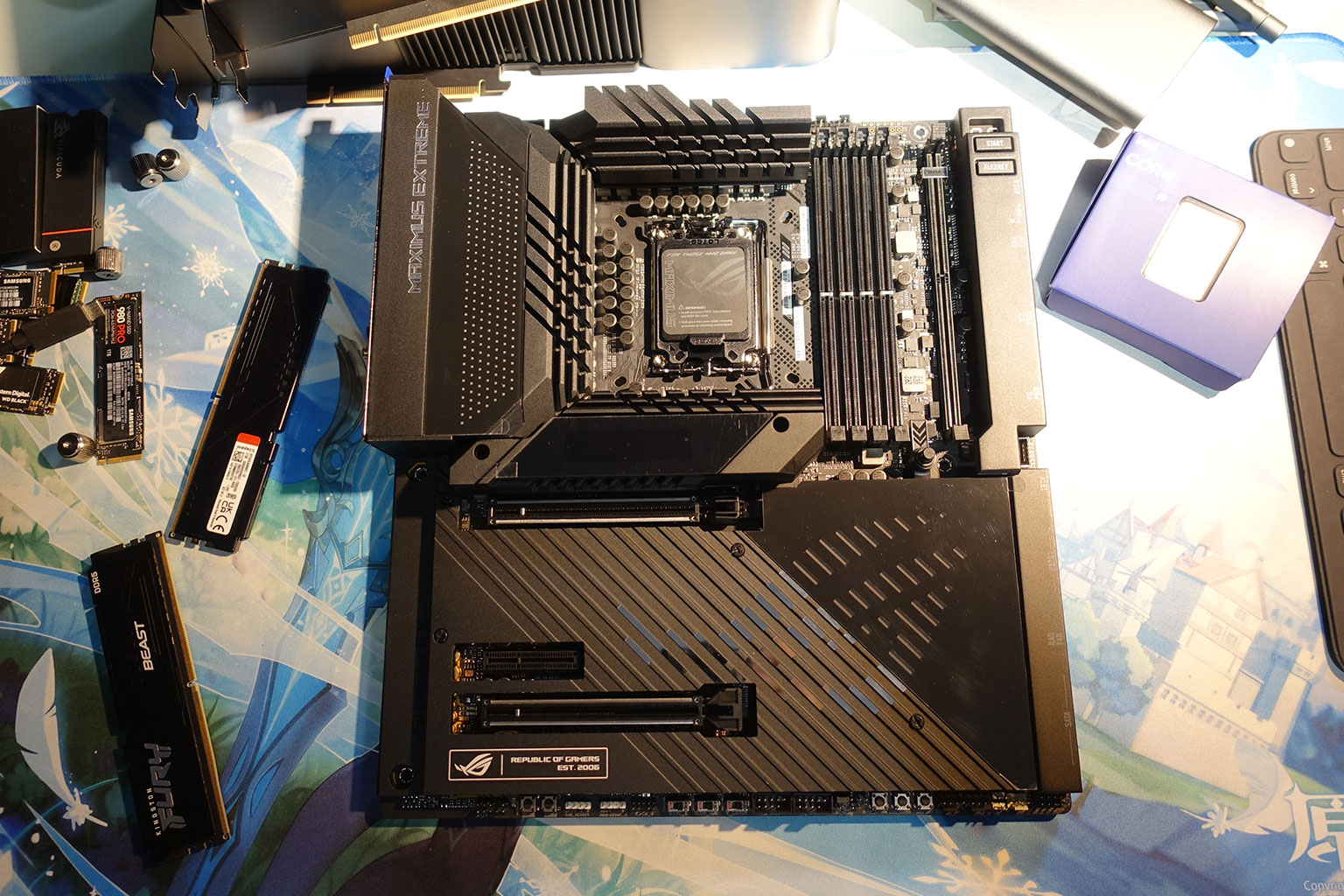 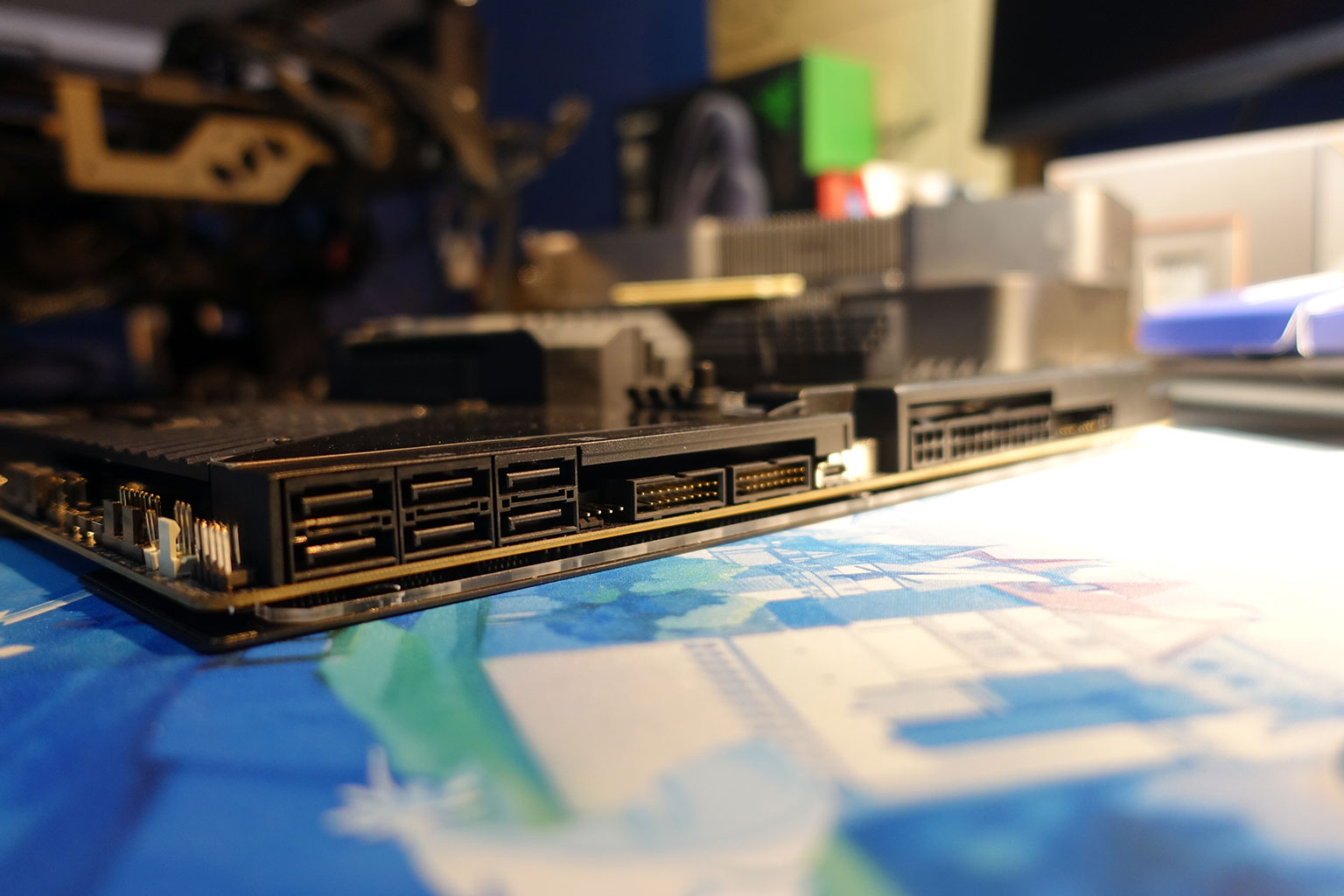 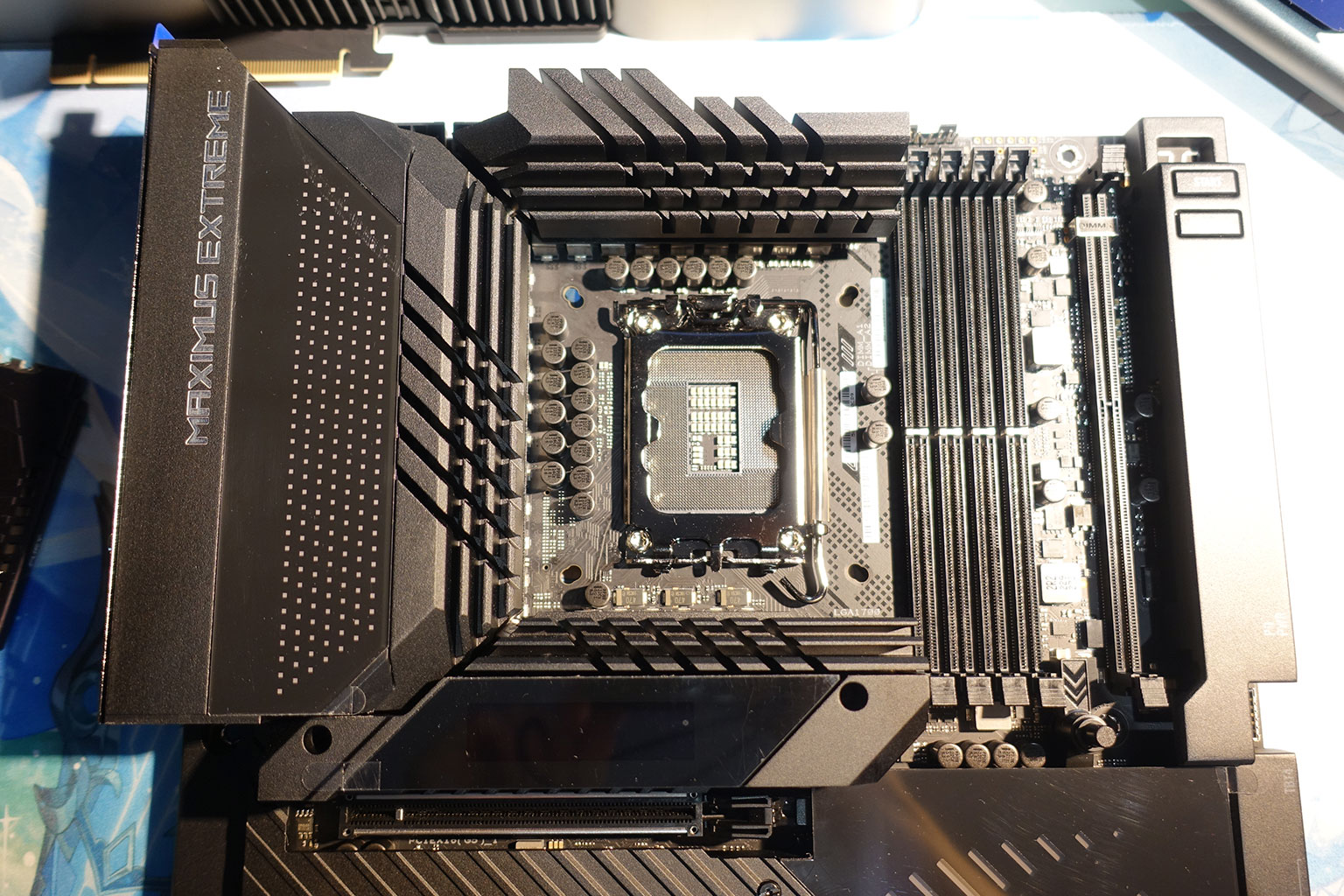 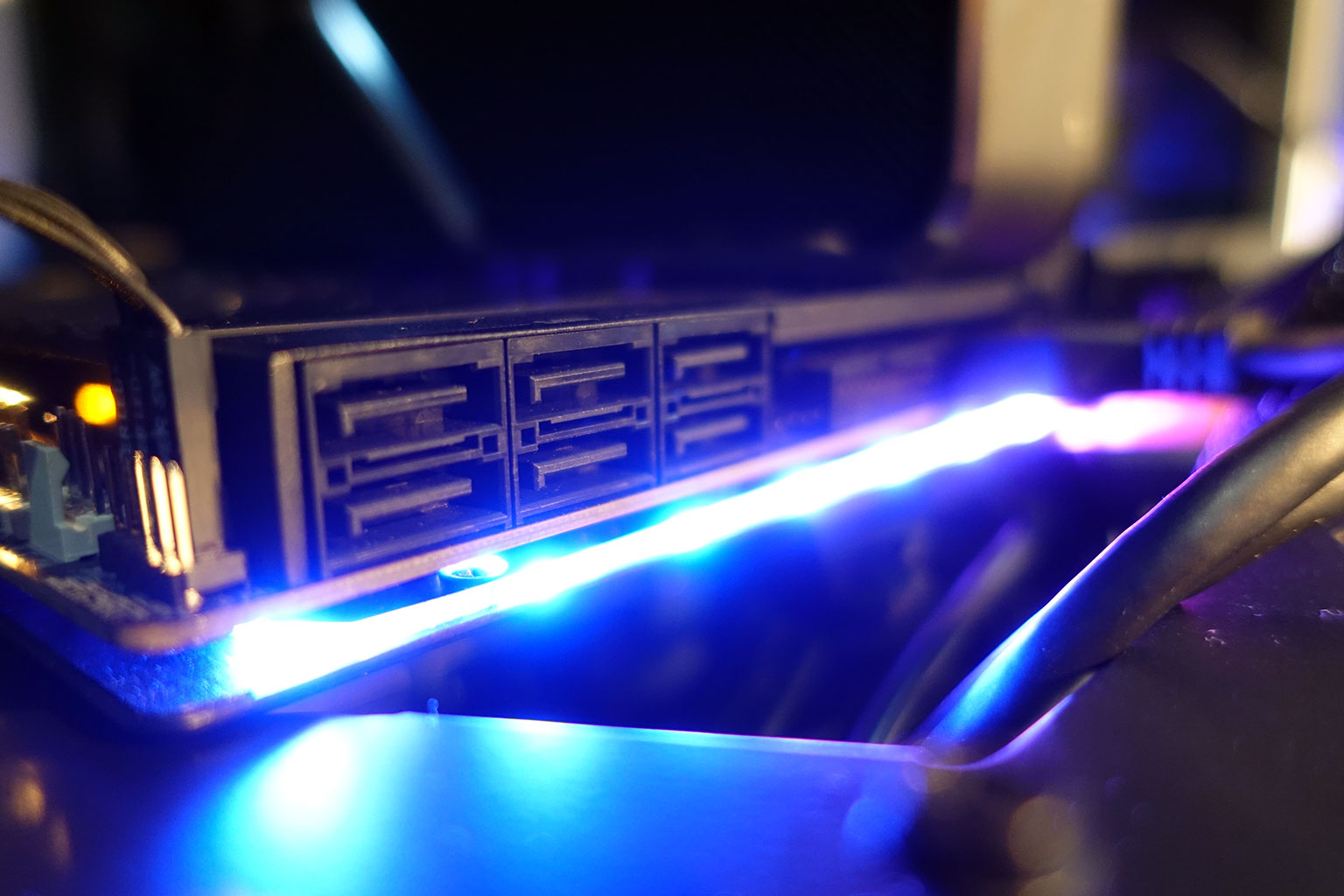 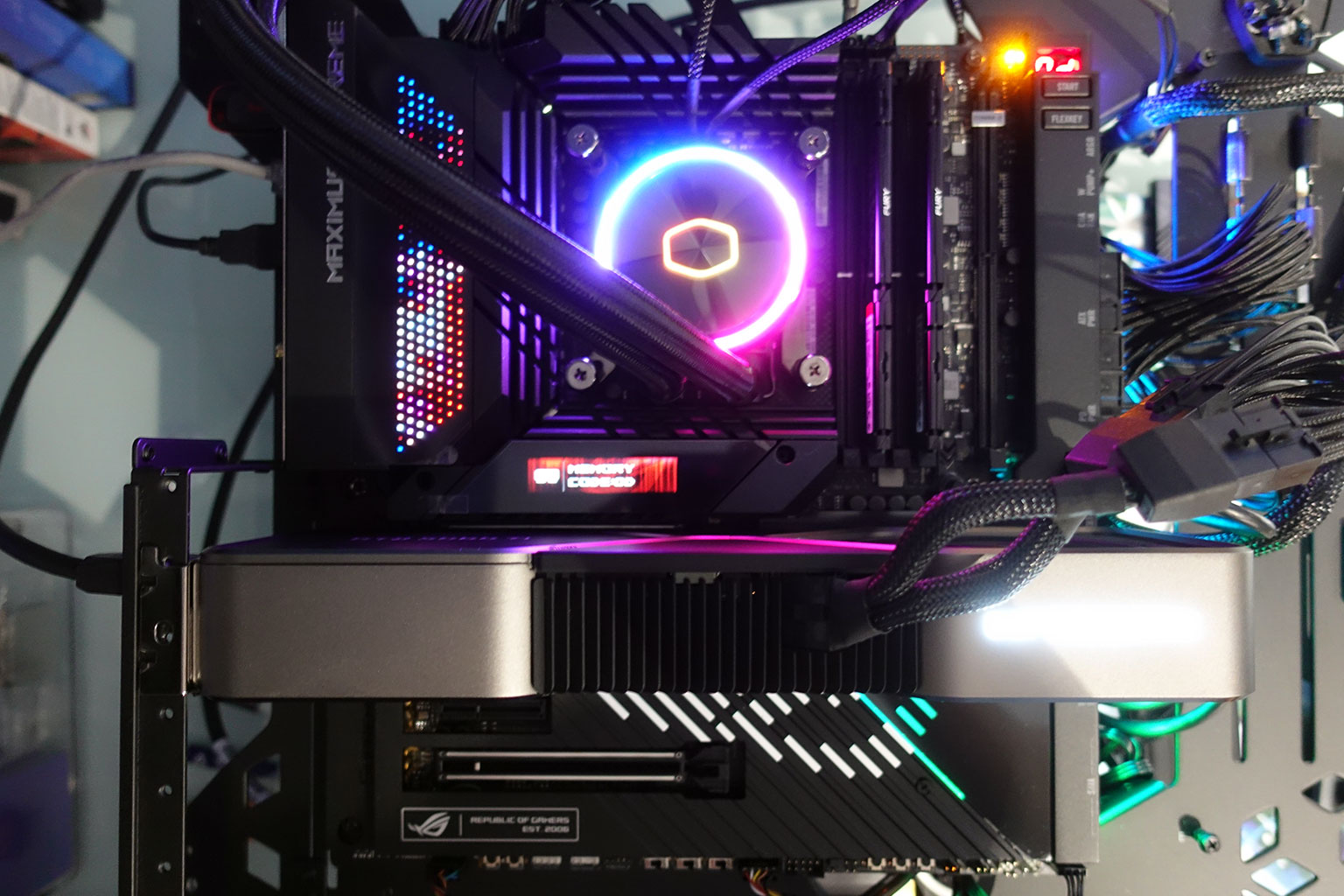 Now let’s find out how the Core i9-13900K performs in my benchmarks.

With AMD having made the jump to support DDR5 and PCIe 5.0 at last, and the Ryzen 9 7950X being the red camp’s crème de la crème processor, and with both processors launching in the same year (which itself is unprecedented) it goes without saying that this is the CPU duel of the year: the Core i9-13900K versus the Ryzen 9 7950X.

My game list includes a mixture of old and recent games to test processor performance. The focus will be on CPU performance, where possible, like Ashes of Singularity: Escalation and Horizon Zero Dawn. The list isn’t exhaustive by any measure, but there are enough different game engines and API variety to give us an idea of broader performance trends.

1080p benchmarking is a great measure of a CPU’s prowess, no thanks in part to high-performance gaming cards such as the GeForce RTX 3080 Ti used in the benchmarks here. You see, at lower resolutions, the GPU can process and transfer data much more quickly than at higher resolutions. A CPU bottleneck happens here because the processor cannot keep up with the processing speed of the graphics card. The CPU, after all, is responsible for processing real-time game actions, physics, UI, audio and other complex CPU-bound processes. 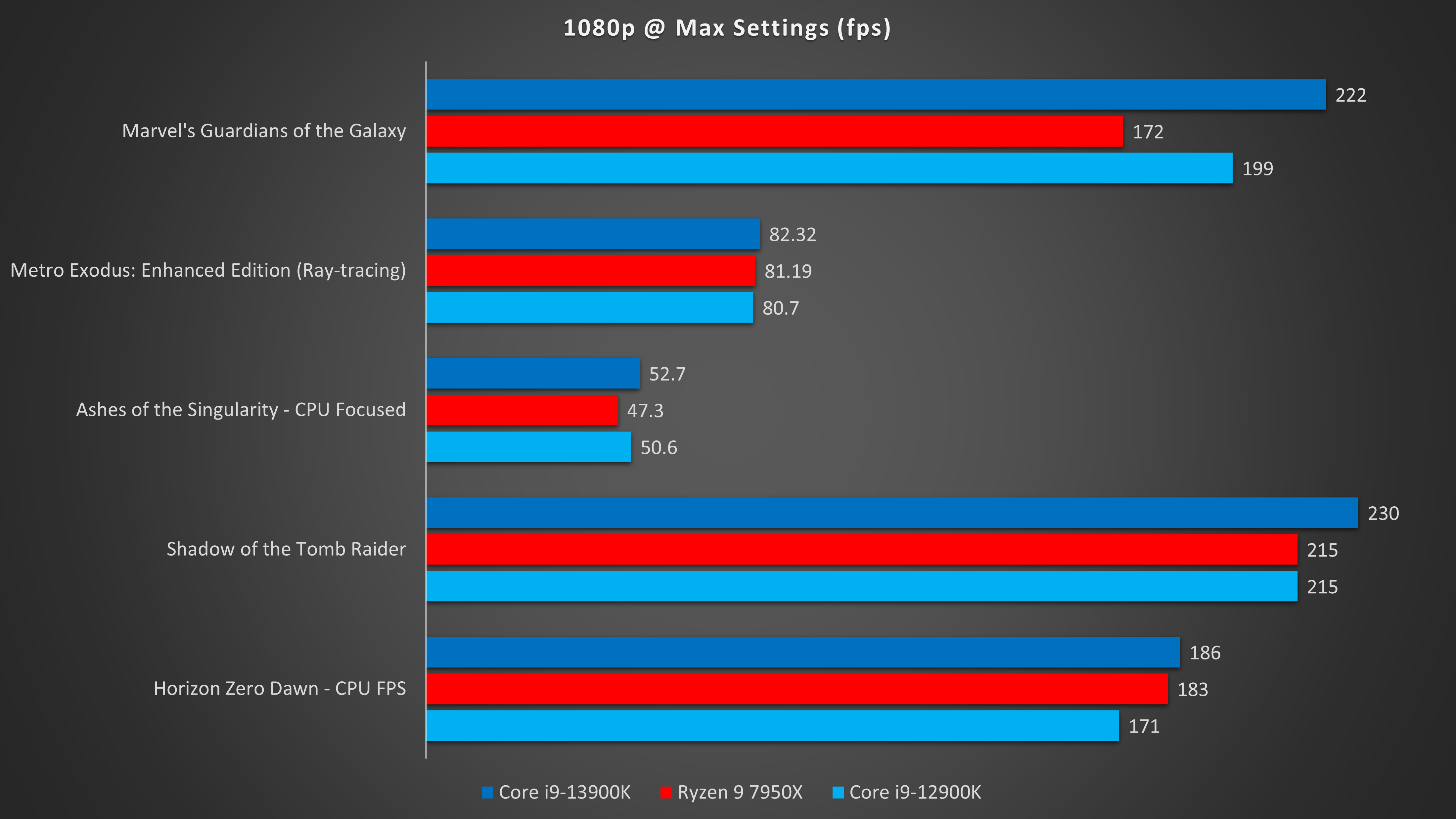 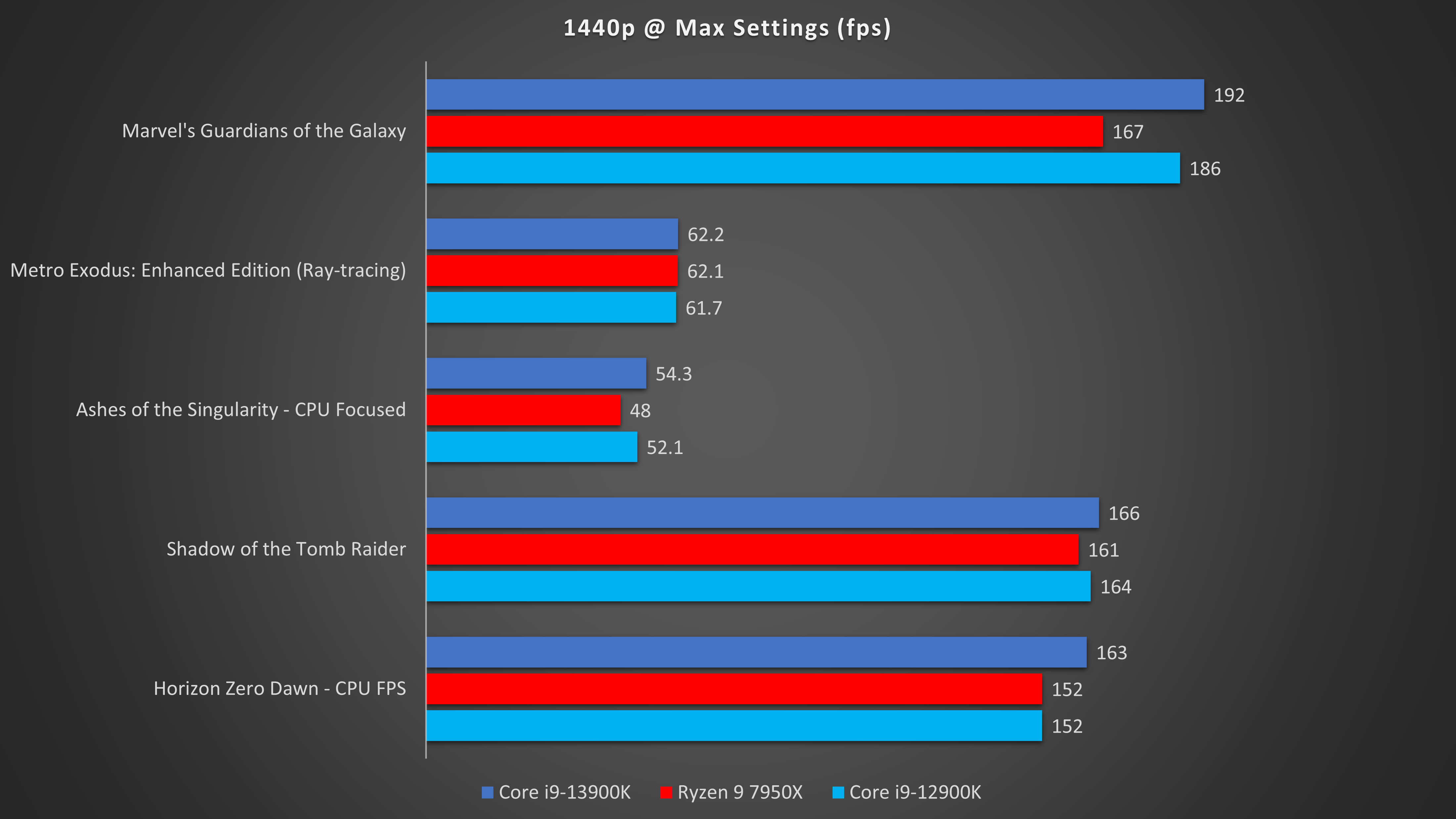 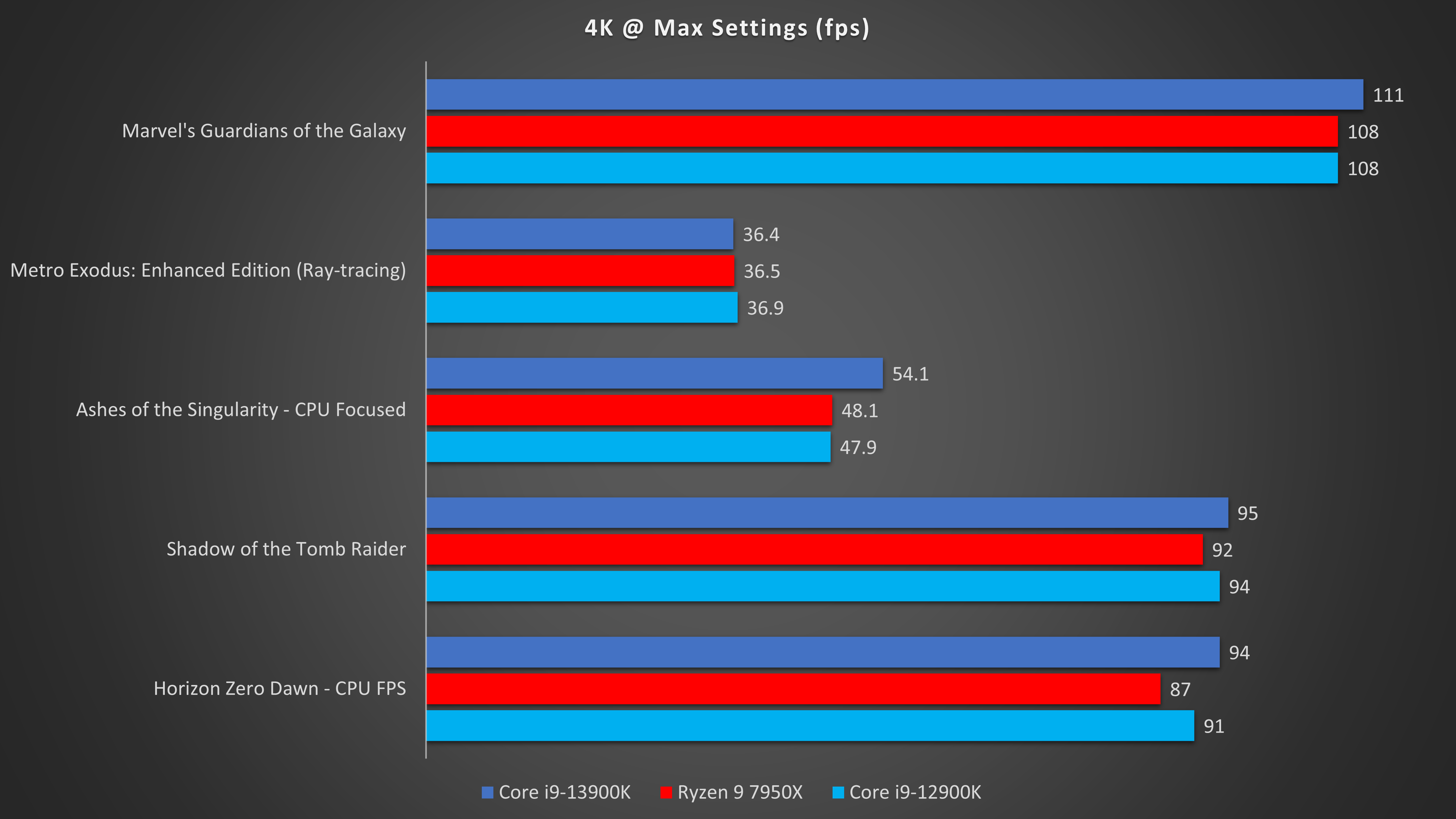 Conversely, the opposite happens at higher resolutions when the GPU takes more time to process the higher data load (more pixels, textures, etc..) and becomes the bottleneck. With 1440p, we start to see this happening, where the difference in performances pared down, and the numbers start to show some interesting results.

Taking the results above, it's quite clear that the Core i9-13900K is the faster performing CPU than the Ryzen 9 7950X although the results aren't quite the "generational leap" that you might have been expecting when comparing it to the i9-12900K. Especially so at higher resolutions, where you see the differences in almost evening out.

The truth is, all three CPUs above are going to do just great for gaming especially at higher resolutions. In many gaming PCs, the graphics card is the constraining factor, not the CPU. But since this is also a comparison between Intel and AMD's best-of-the-best, where marginal gains count, then the Core i9-13900K is undisputedly the best CPU out there for gaming.

It's with content creation and rendering that things start to get a lot more interesting. I’ve used CineBench R23 alongside a mix of synthetic and real-time benchmarks. SYSmark 25 and PugetBench for Adobe Premiere Pro, for example, are great benchmarks as they run real-world applications and mimic workloads. 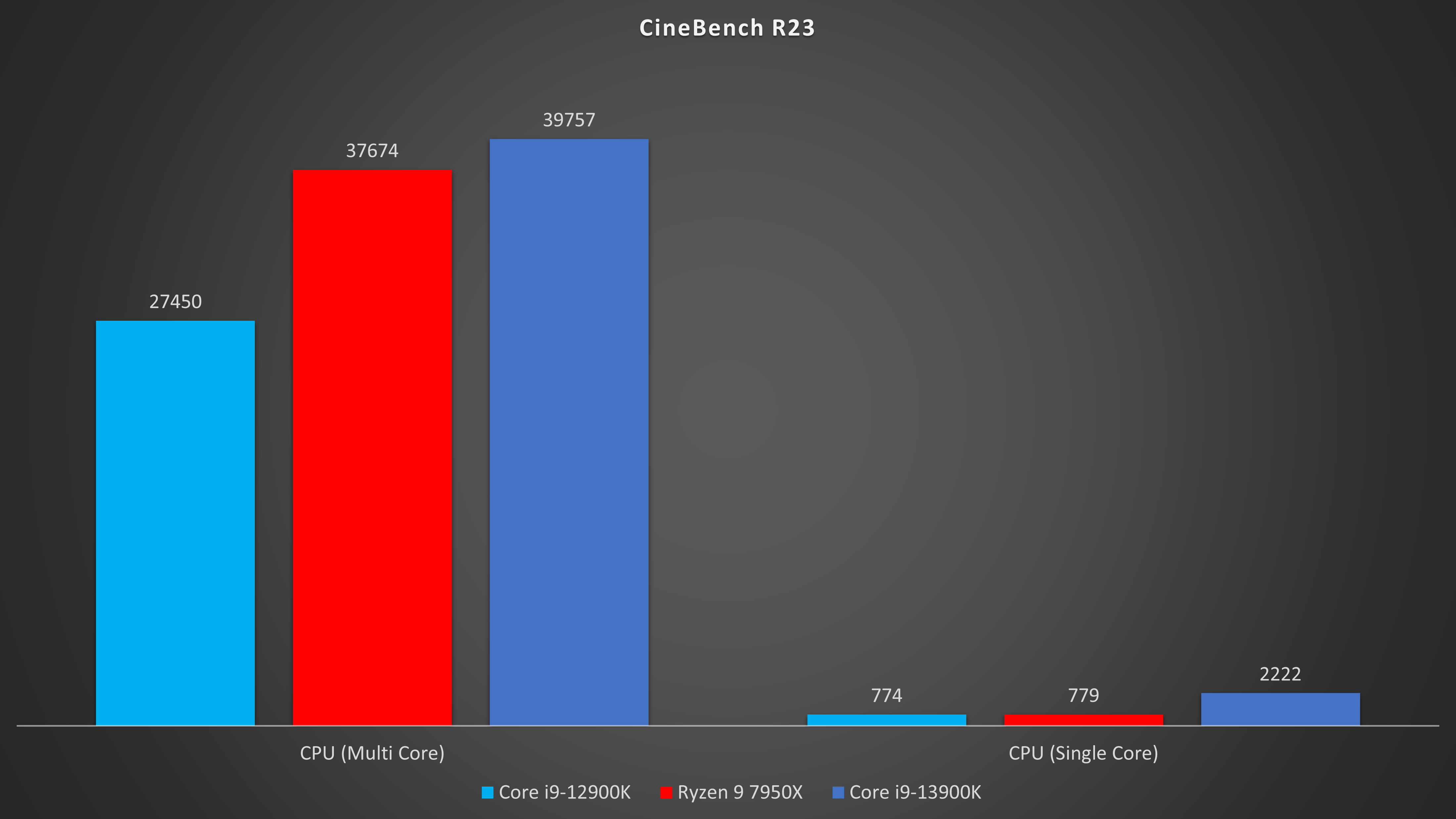 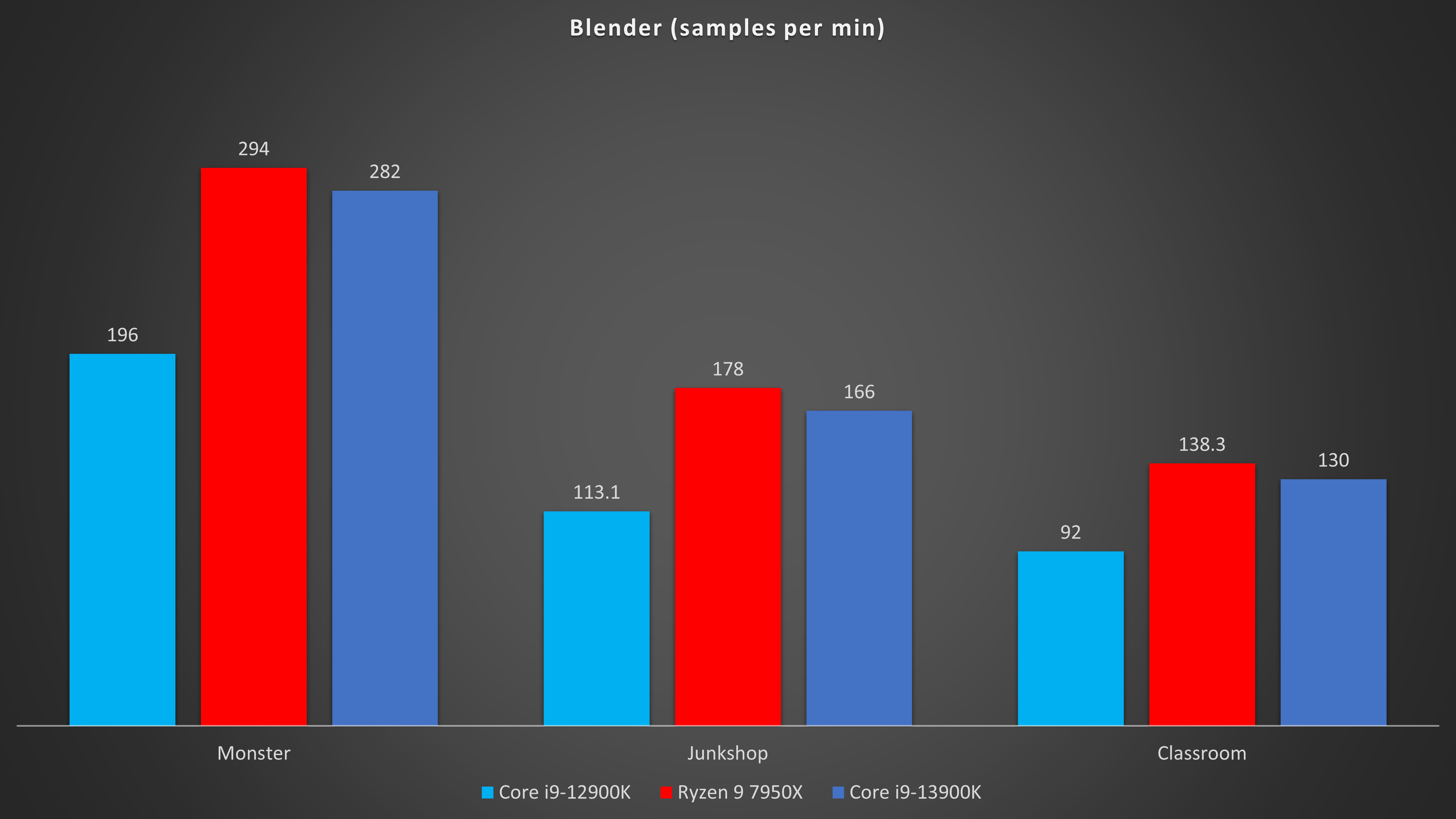 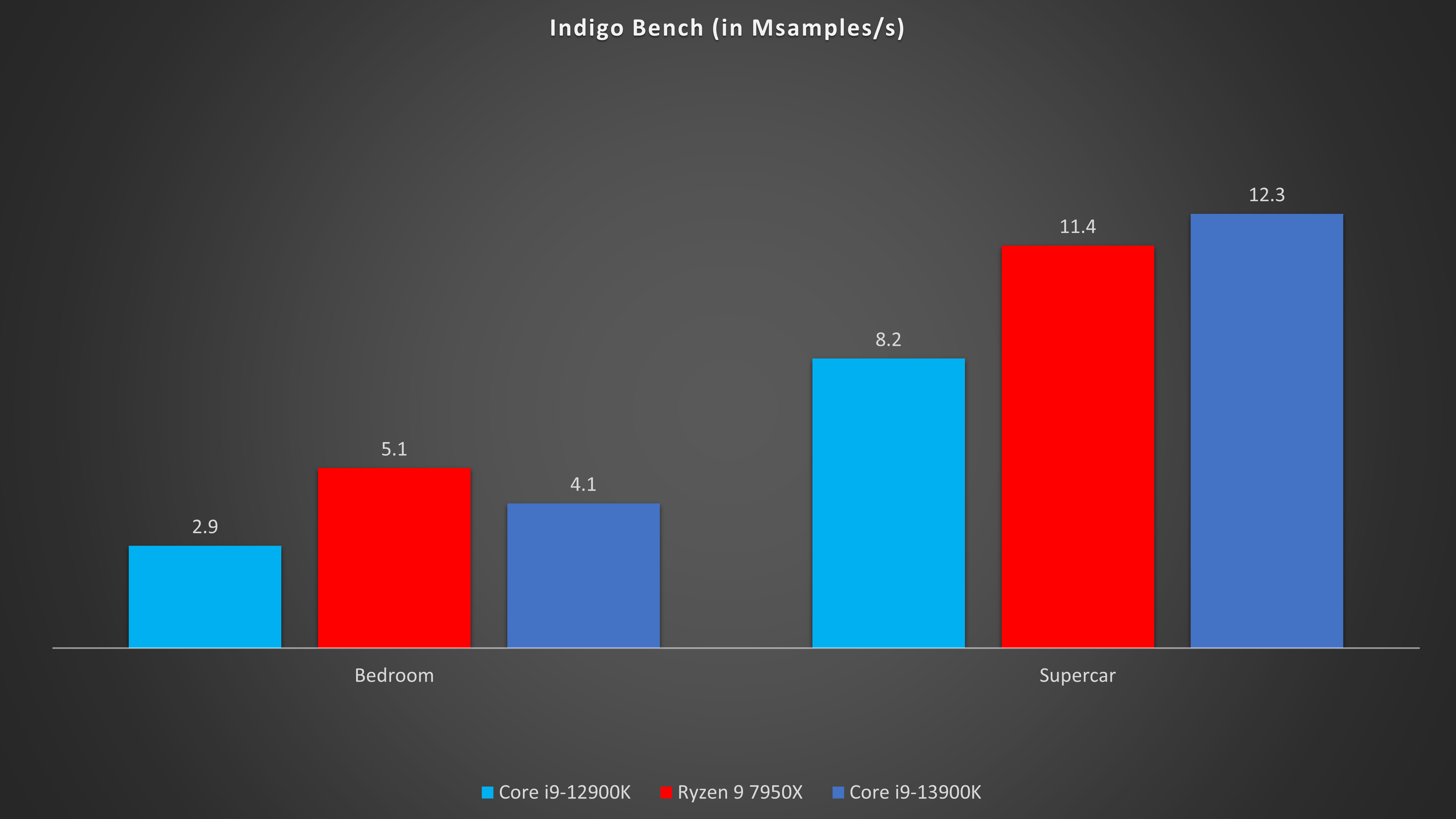 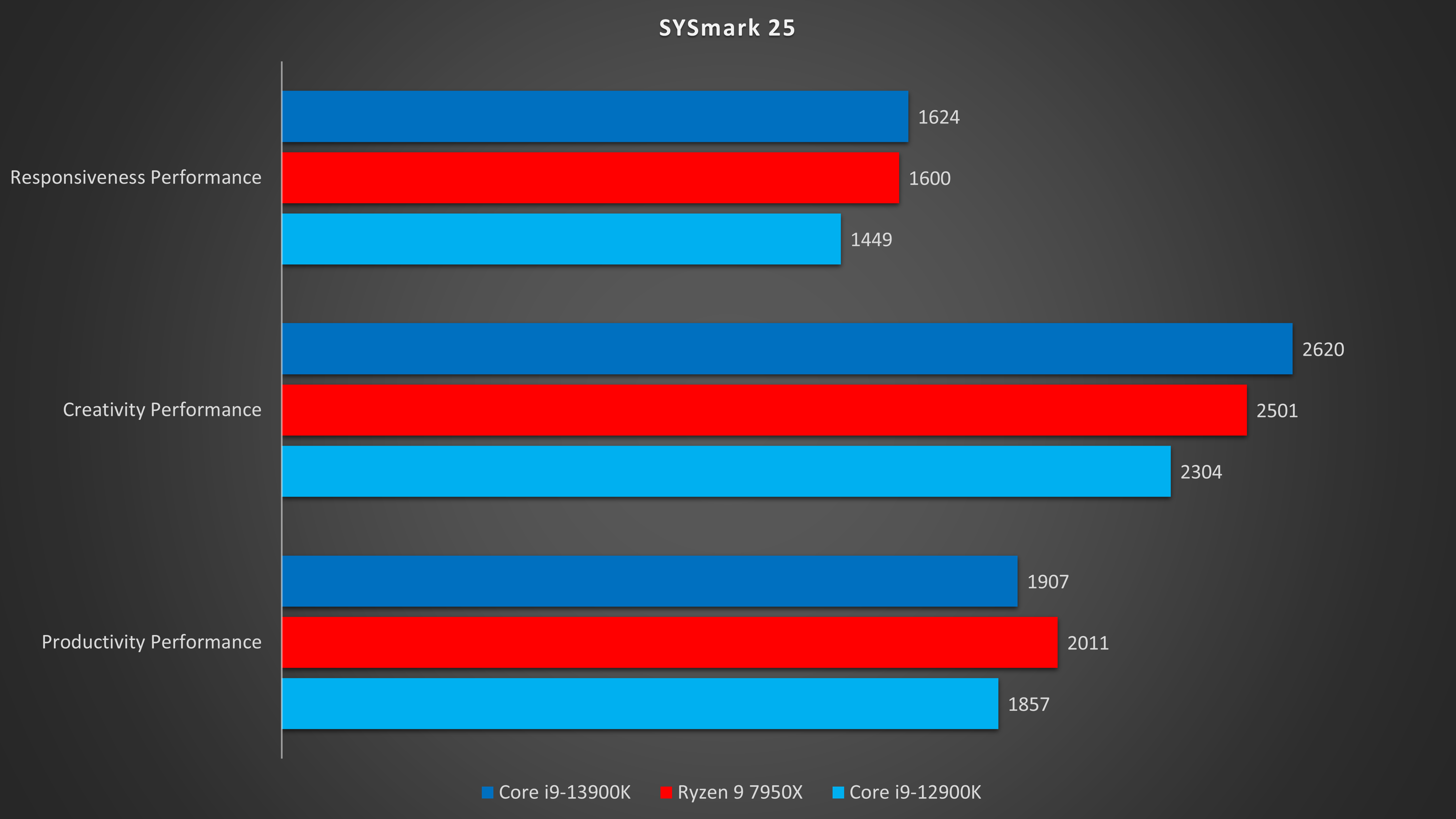 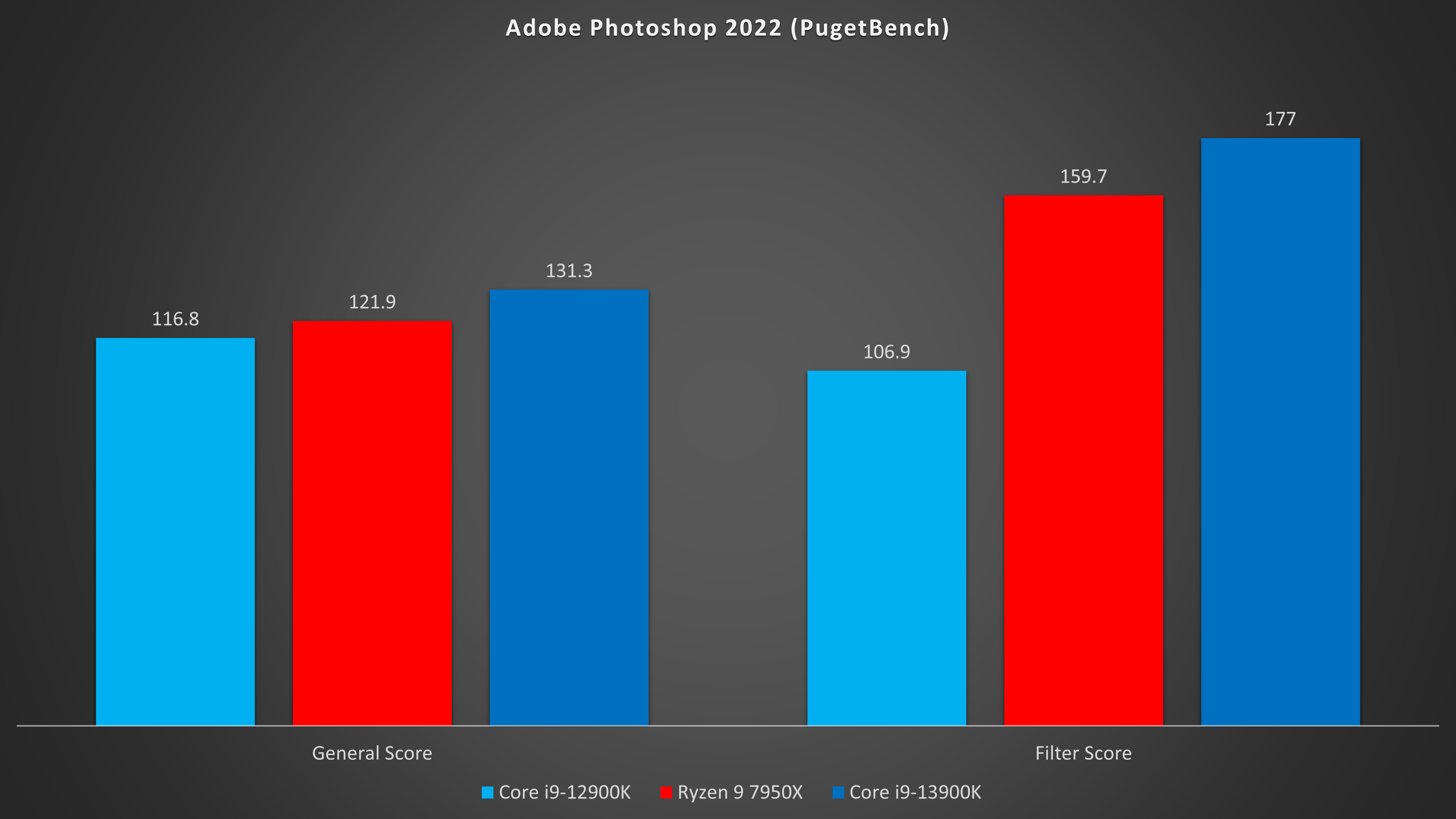 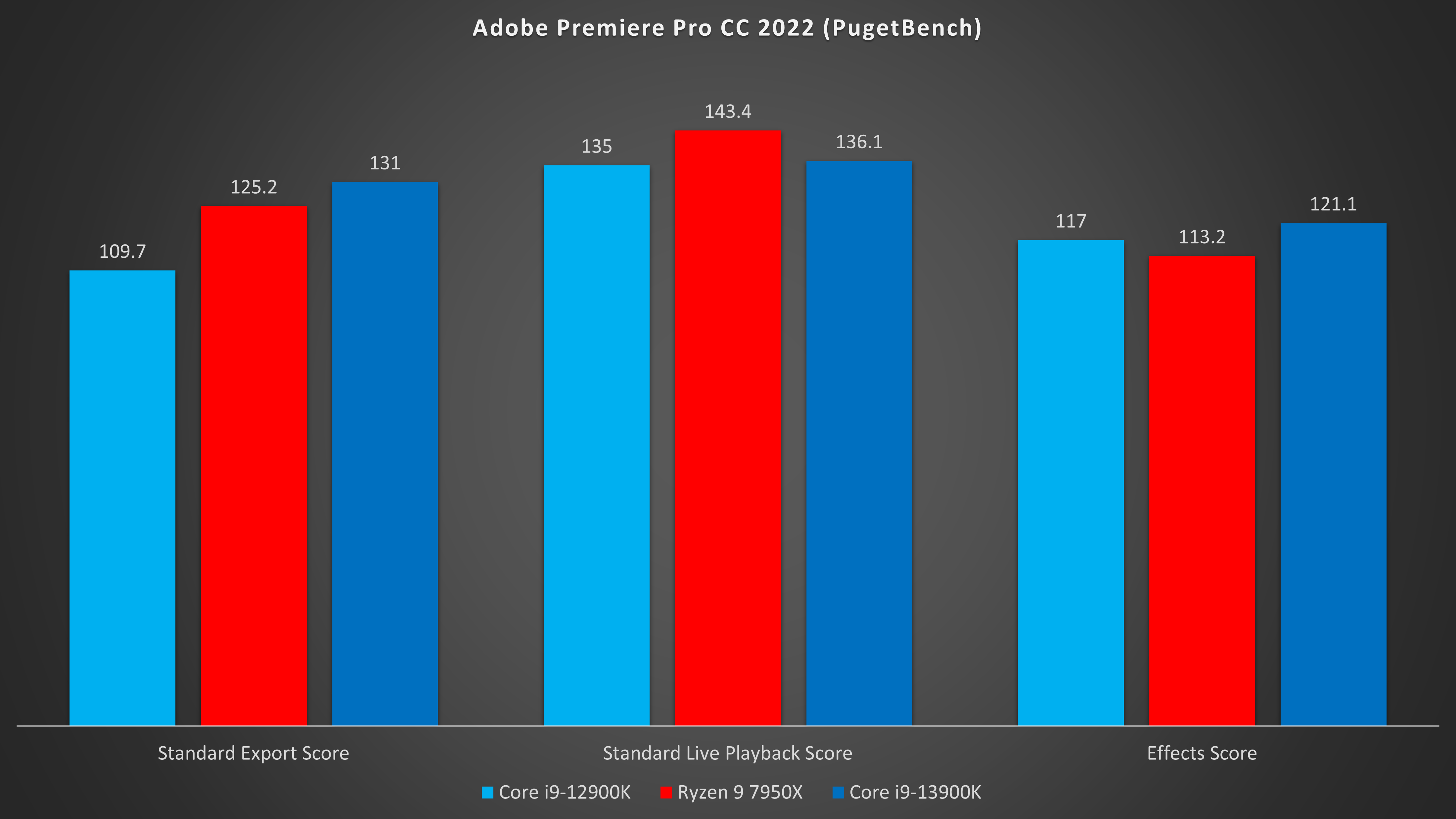 In most scenarios above, the Core i9-13900K outperforms the Ryzen 9 7950X, and this is almost definitely due to the former's superior core count and speed. Remember, the i9-13900K's 16 E-cores and 8 P-cores can work together, and rendering applications such as CineBench will utilise all of these cores. 3DMark's CPU Profile tests also show us that while, core to core, both the Ryzen 9 7950X and Core i9-13900K single-core runs at about the same speed, the i9-13900K just seems to be able to achieve better efficiencies – and therefore, performance - when running multi-core tasks.

Final thoughts: Intel takes the cake home (and get to eat it) again

As far as performance is concerned, there's no beating around the bush: Intel's 13th Gen Core i9-13900K is the best CPU, not just for gaming, but the best consumer CPU for all things gaming, content creation and rendering. But its raw, unapologetic power does come with a couple of drawbacks.

As today’s processors are pursuing eye-popping performance numbers with less regard to energy use, power consumption has become a hot topic when evaluating these chips – especially when you consider what's going on with the current global political climate. Just think about this: The Core i9-13900K has a maximum turbo power of 253W as compared to the i9-12900K's 241W. If you're going to pair this processor with a GeForce RTX 4090 graphics card, then a 1000W PSU is a must.

That said, Intel's engineers have done a fantastic job in squeezing a heck of a lot out of each watt from the Core i9-13900K. Although the processor demands a lot of power and cooling (all that heat will require a good AIO with a 360mm radiator), the good news is that the Core i9-13900K is capable of maintaining its clock speeds even when pushed into a thermal wall, which is something that wasn’t true with pushed chips like the Core i9-12900KS. In my CineBench R23 stress test (which is a lot more torturous than the older release R20), the chip ramped up to its thermal limit of 100 degrees Celsius and stayed there for the entire run but yet still maintained 5.4GHz on the P-cores and 4.2GHz on the E-cores. It's actually very impressive.

Overall, the Core i9-13900K simply bests the Ryzen 9 7950X in performance benchmarks and with a lower SRP than the latter (US$590 vs. US$699), the choice for PC enthusiasts, gamers and even creators is too obvious.

Write a Review
Compare This | Specifications
Great multi-core performance
Backward compatible with Z690 chipset
Better price point than the AMD Risen 7950X
Runs at full power despite hitting thermal wall
But it's not cheap
Runs at 100 degree Celsius at full power
Power hungry
Our articles may contain affiliate links. If you buy through these links, we may earn a small commission.
Sponsored Links