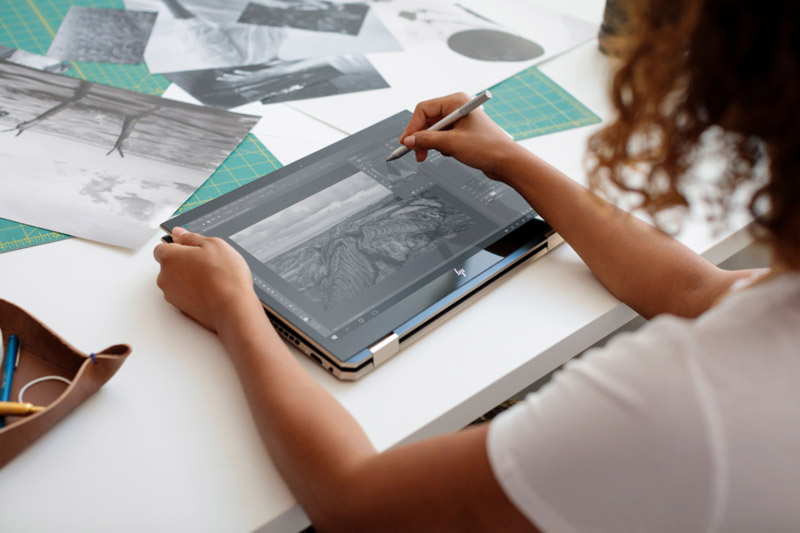 The HP ZBook Studio x360 G5 is not quite your average notebook, as it comes with Intel Enterprise-level processors and NVIDIA Quadro series of graphics to enable you to do your best work on the move. Usually made for professional video editing, game development and design apps, the ZBook Studio x360 that I’ve been testing over the course of a few weeks is similar in design functionality to HP’s other x360 models — the Pavilion, Spectre, Envy, ProBook and Elitebook x360 — in that the display is double-hinged.

This allows for the keyboard to be folded all the way behind the screen (hence the 360 moniker), allowing it to be used similarly to a tablet or placed in a presentation mode like a tent with the keyboard partially folded behind it. But the ZBook here is clearly the top-end option of the systems available in that form factor. And it inherits all the engineering from the rest of HP’s extensive product portfolio, as far as security, serviceability, and interface are concerned.

The ZBook Studio x360 is highlighted by its components, and depending on your budget you can jazz it up with up to two 2TB PCIe NVMe M.2 SSDs, a hearty 64GB DDR4-2667 non-ECC RAM, an NVIDIA Quadro P2000 and an Intel Xeon E 2186M vPro that features 2.9GHz base frequency. If you have a limited budget though, there’s also the option of going the opposite extreme end with more economical hardware, including less RAM, Intel i5 processors, integrated graphics and SATA SSDs. In the case of the test unit in my hands, it comes somewhere in the middle ground with an Intel Core i7-8850H CPU @ 2.6GHz, 32G RAM, 1TB PCIe NVMe SSD and an NVIDIA Quadro P2000 professional graphics processor.

She’s got the look 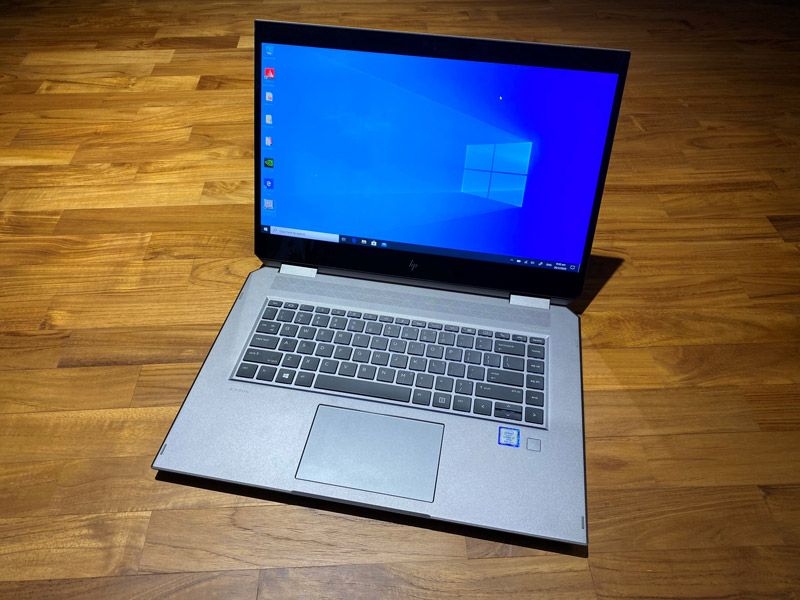 The ZBook Studio x360 is geared more towards users who want traditional functionality with the ability to be used as a tablet as well. With the folding hinge design the notebook can be transformed into four different usability modes: the standard issue laptop mode, stand and tent modes for collaboration with the notebook standing as an A-frame, tablet mode for traditional tablet functionality without a physical keyboard and docked mode for multiple displays. In notebook mode the x360 holds up quite well with minimal screen movement compared to a standard notebook. 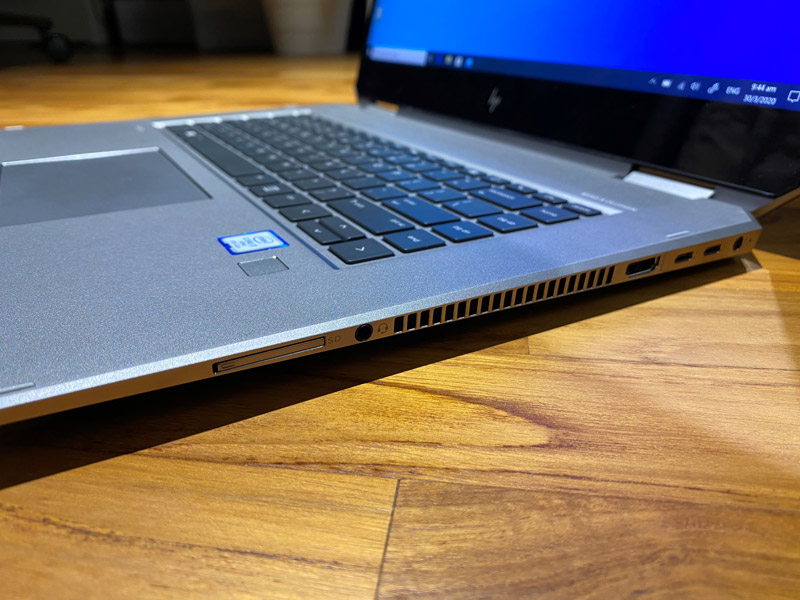 As for the screen itself the glossy 15.6" 4K panel is beautiful. The test unit in my hands came with a 15.6” 4K, 400 cd/m2 LED-backlit touch-sensitive panel and Corning Gorilla Glass 4 top surface. It’s very impressive to say the least. The Corning Gorilla Glass may seem over-kill, but it actually makes a lot of sense - with the touch-sensitive panel bound to deal with more fingerprints and interaction, having a highly scratch-resistant surface is important. If colour accuracy is important to you, HP also offers a DreamColor option, which comes with 100% AdobeRGB accuracy and a 600 cd/m2 brightness. Screen functionality includes the HD camera, IR camera and microphone at the top middle of the bezel. 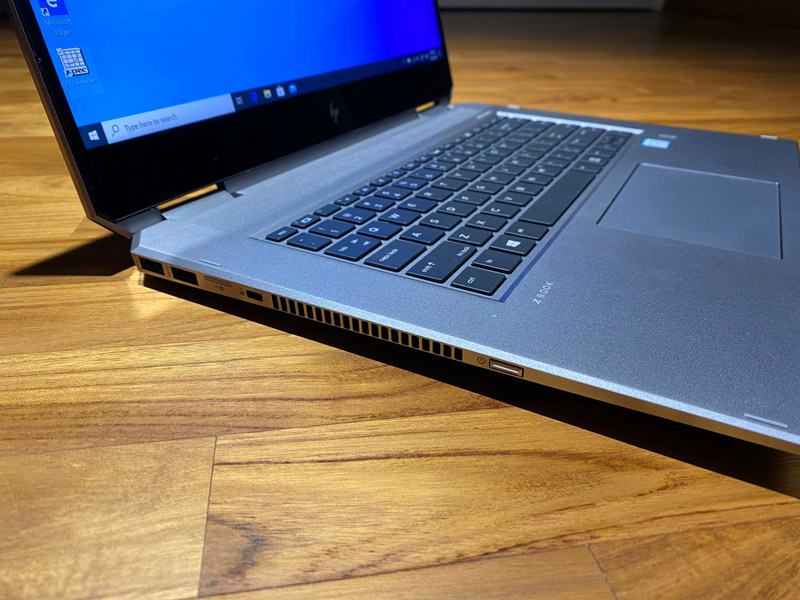 The keyboard itself is comfortable to use and features a click pad, fingerprint sensor for secured logins, and speakers. It is also very delightful to type on, offering strong tactile feedback and is fully backlit for easy typing in poorly lit conditions. On the left side are two USB 3.0 ports (one for charging), a security cable slot, the power button and a SIM-card slot – yes, the notebook works with mobile data too. Turning the notebook around to the right is the stereo microphone in / headphone-out combo jack, power connector, an HDMI 2.0 port, two Thunderbolt 3 ports, and an SD Card Reader.

My tests for workstations such as this ZBook Studio x360 differ from our usual notebook reviews, as I focused solely on non-gaming-oriented benchmarks. Have a look. 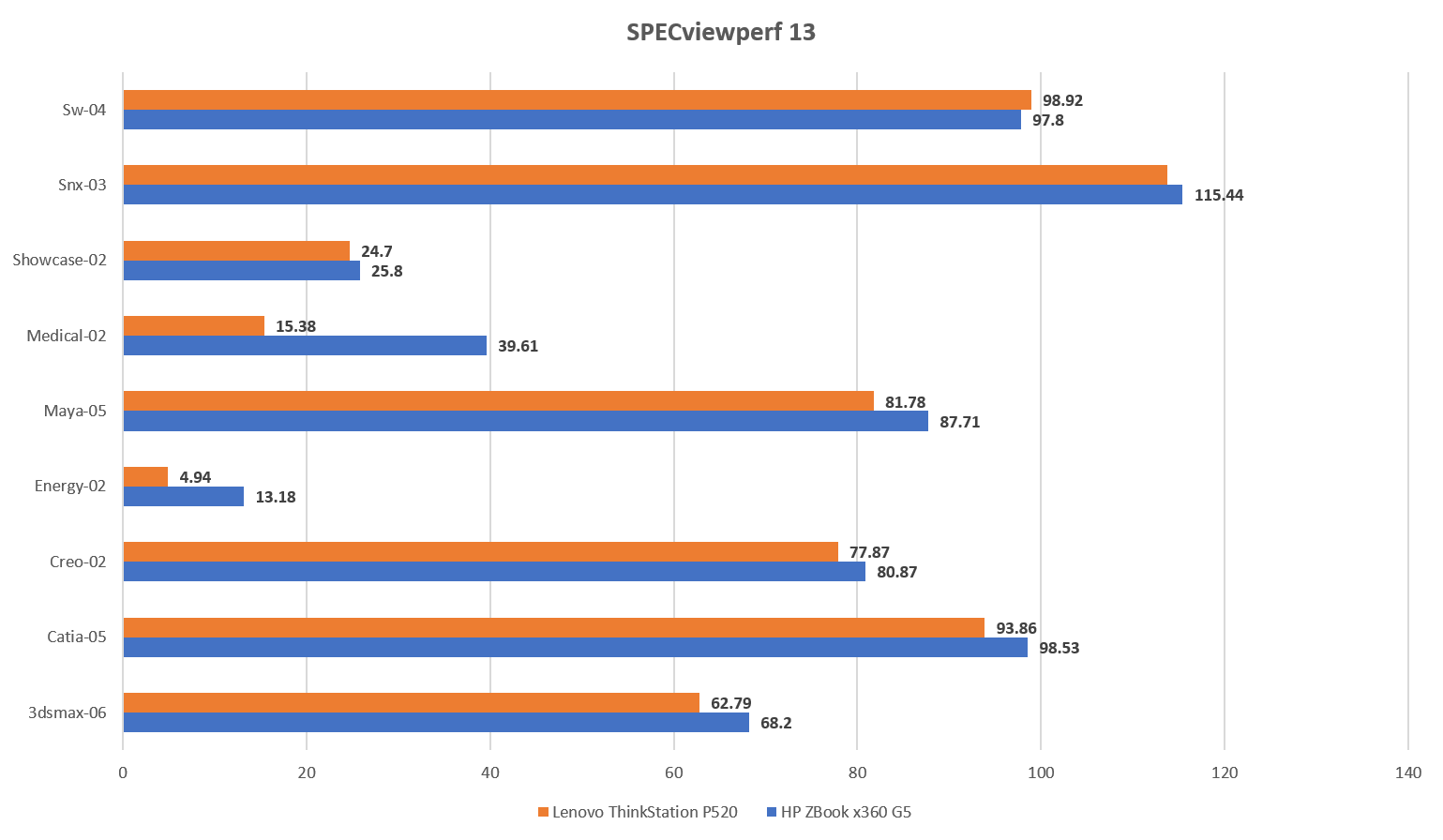 Well, unsurprisingly the ZBook Studio x360 recorded solid results for its class and edged the Lenovo workstation with its higher-end Quadro P2000 GPU. I would have liked to compare it against more workstations and will update this review with more numbers in the near future. So do come back here. 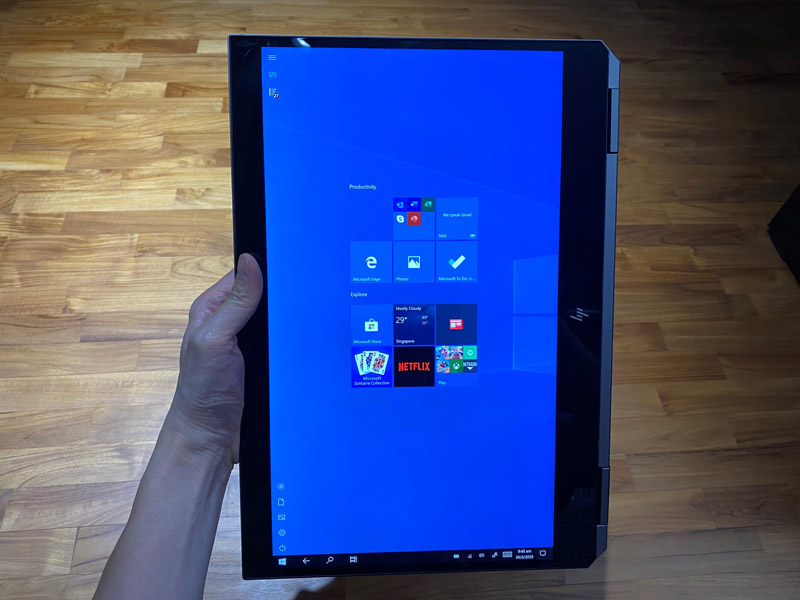 The HP ZBook Studio x360 G5 convertible notebook is a fine workstation, and even makes for a great Windows tablet, too. Being a workstation PC, you won’t be disappointed with its performance, and should suffice pretty much every professional user – especially those from the creative field. It also comes packaged in a great, all-metal build (despite the display flex discrepancy). The Bang & Olufsen integrated speakers, while being decent for in-laptop ones, isn’t particularly remarkable to write home about. But, when it comes to streaming your Netflix shows, it more than gets the job done. Finally, the notebook also comes with a great keyboard that induces little to no fatigue in long duration usage, and you have a commendable laptop/convertible in your hands.

But, for the average user, the ZBook Studio x360 is a bit of an overkill, at least in terms of its pricing. HP itself offers lesser priced convertibles that would suit most workloads, unless your everyday usage involves CAD, industrial applications, professional animations or colour grading high resolution uncompressed video files, and so on. If you belonged to this group of power users, then the ZBook Studio x360 offers one of the best options in the market