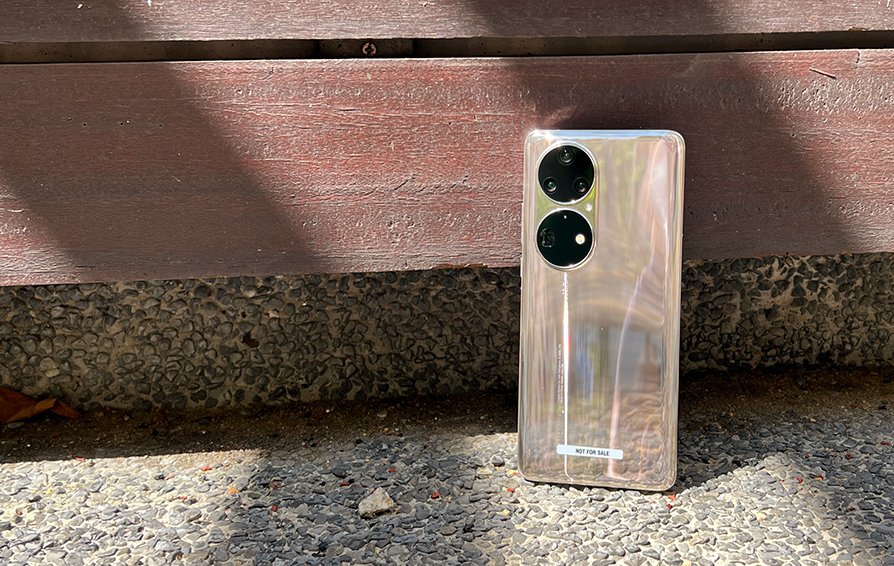 Six months after unveiling an inevitably late Huawei P50 Pro to the world, Huawei finally deigned Singapore worthy enough to enjoy and use its 2021 flagship handset -- by making it available to consumers here in January 2022 at a grand price of S$1,548. Surely, the Chinese telecommunications and network giant must know something we don't, given its timing and pricing, despite being a late arrival.

(No, that's not a slight at Huawei, considering they are hardly the only phone makers to delay 2021 handsets until 2022).

As a 2021 device made for the international market, the P50 Pro sold here packs a Qualcomm Snapdragon 888 4G chipset, instead of the Huawei Kirin 9000 processor available inside China-only variants. The phone is also Android-based with Huawei's EMUI 12 cloaked over it, making it compatible with sideloaded Android apps and existing AppGallery apps.

Like all P series handsets before it, Huawei P50 Pro undoubtedly gave its imaging capabilities the spotlight. In fact, we've had a detailed unboxing session ahead of its launch to see what Huawei might offer with its flagship device, so do join our editor's walkthrough if you've not seen it yet:-

So, how will a 2021 flagship device hold up against fierce 2022 competition? Is the phone any easier to use now that AppGallery and the HMS Core had another year to get a footing here? Is the imaging prowess of the P50 Pro excellent enough to carry the phone's overall useability? Let's find out.

Note: This written review covers additional areas that we’ve not covered in our video overview above - like benchmarks and usage beyond first looks. We suggest taking both the video and the review below together for a fuller picture of the Huawei P50 Pro in Singapore. 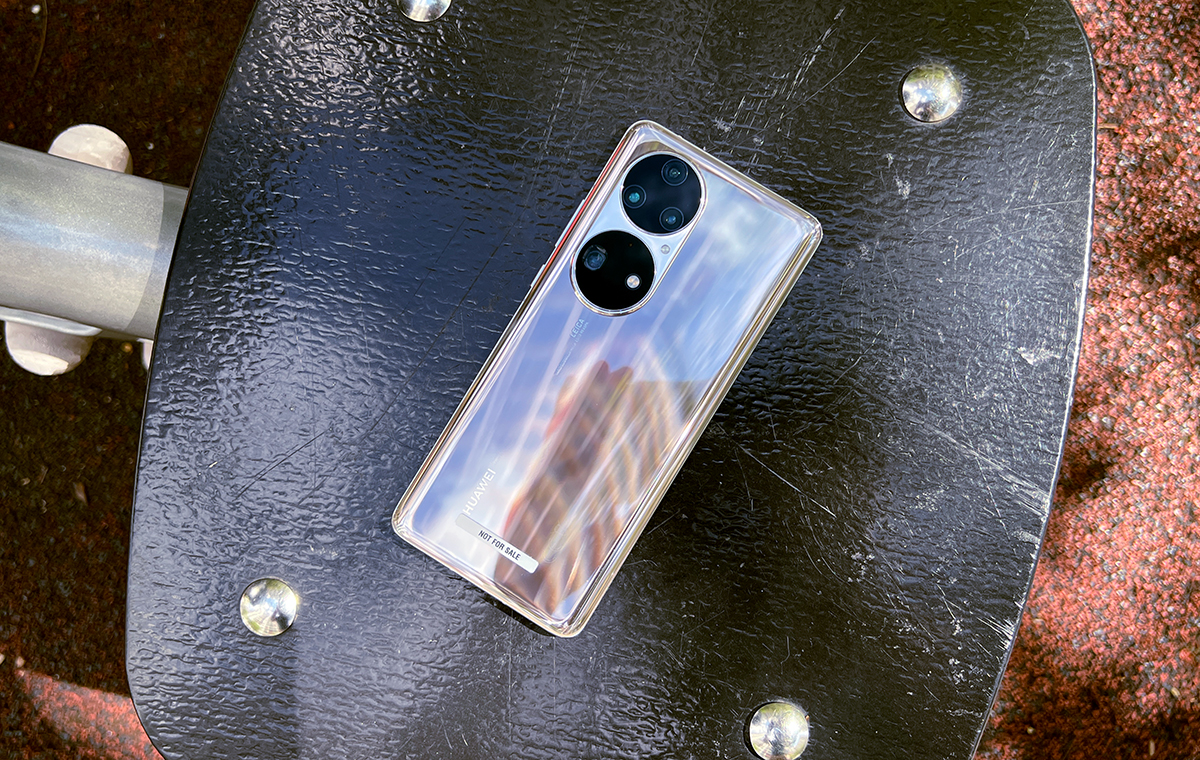 In essence, if you liked Chinese phone designs that dominated the market for the last few years, the P50 Pro makes for a familiar handset, with some embellishments to help itself stand out. 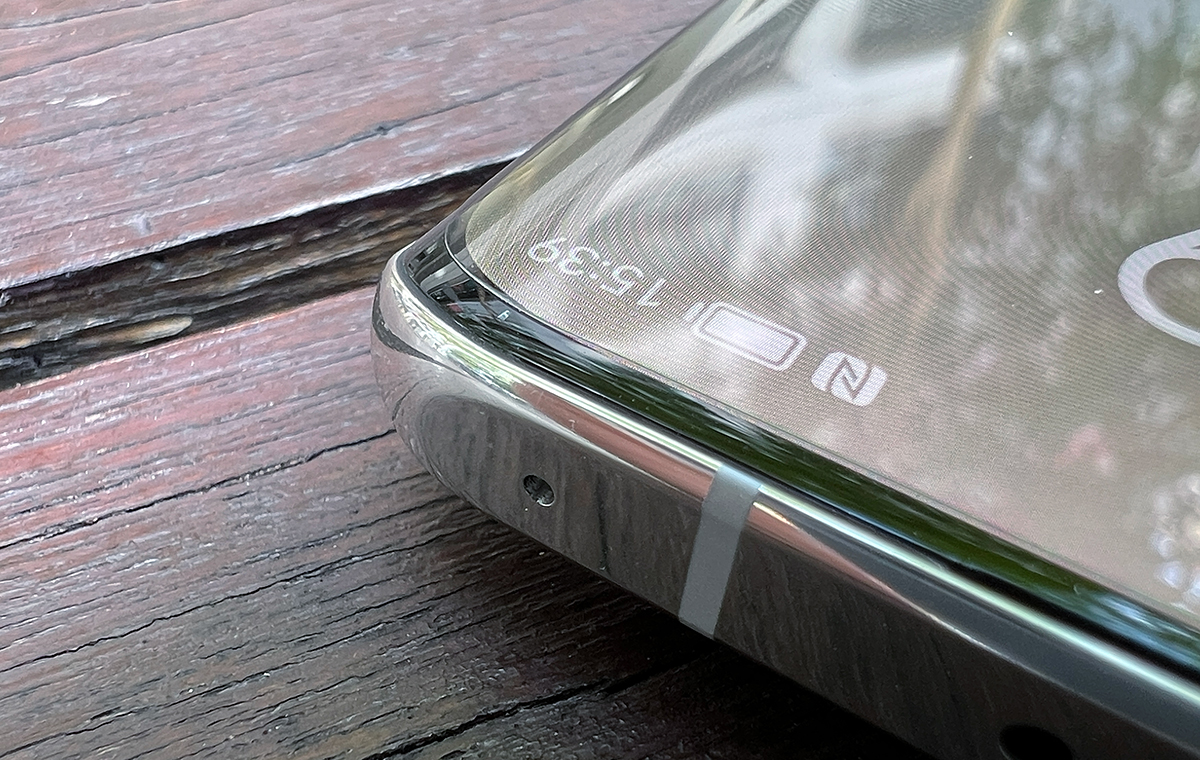 The phone itself uses curved, glass-coated back with a prominent metal rim. The added premium touch comes from its high-polish appearance. 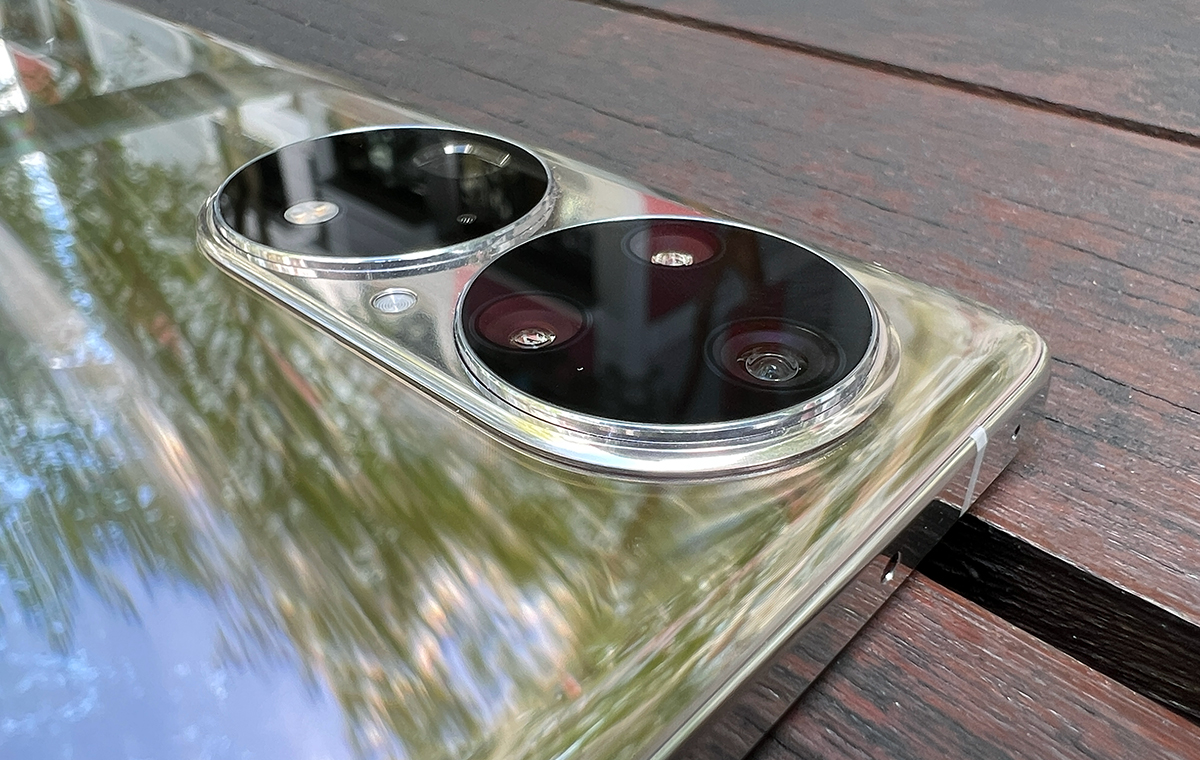 The signature appearance comes from P50 Pro’s Dual Matrix design, which is a fancy term for its two massive circular cut-outs housing its four rear cameras and LED flash module. This time around, the camera bumps aren’t as thick as their predecessors. It doesn’t exactly prevent the phone from wobbling on a flat surface, but it’s less awkward and bulky in hand. 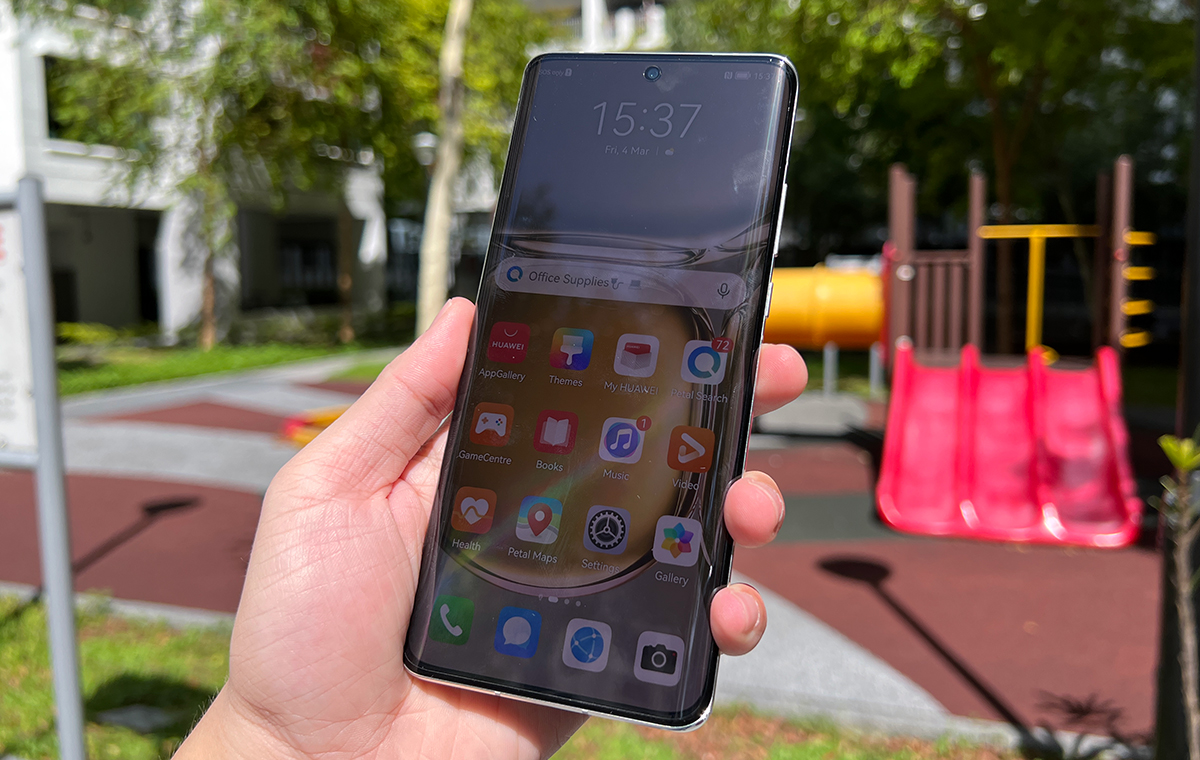 The tried-and-tested ergonomics for the P50 Pro means that users would be choosing the phone based on their design preference. Personally, we’d like our phones to be less gaudy, so the massive camera housings aren’t our cup of tea, though it does make its rear look unique. The device is also rated IP68 for water and dust resistance, so it also checks the flagship feature boxes for design considerations. 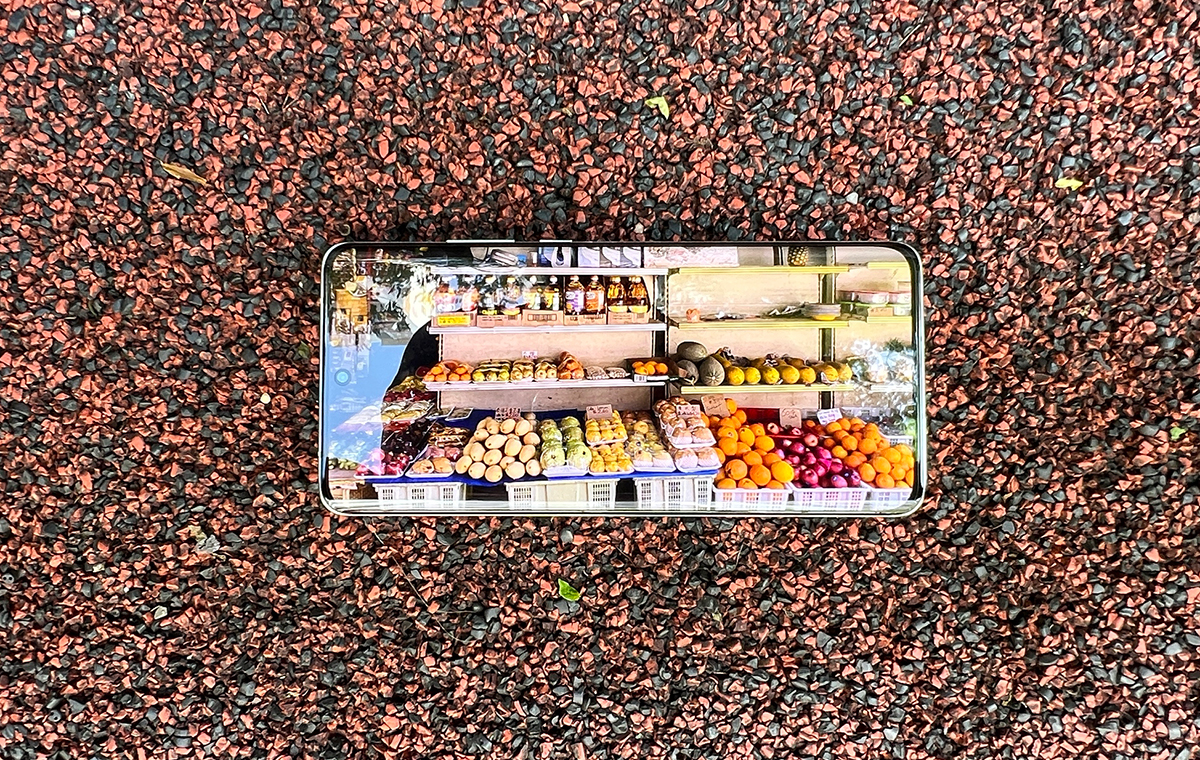 The P50 Pro offers a 6.6-inch 3D curved OLED display (2,700 x 1,228 pixels resolution) and 120Hz refresh rate. While it offers a high pixel density for content sharpness (450 pixels per inch), the odd 1228p resolution choice on P50 Pro would mean you’re straddling between 1080p content that looks almost sharp but not quite, and 1440p content that exceeds the phone’s resolution requirements.

Beyond that, the OLED display offers a natural, yet vibrant panel with amazing, lifelike contrast and shades. It also offers the users to fix refresh rates at either 60Hz or 120Hz, on top of offering Dynamic Screen Refresh Rate if you want to maximise battery savings and viewing quality. 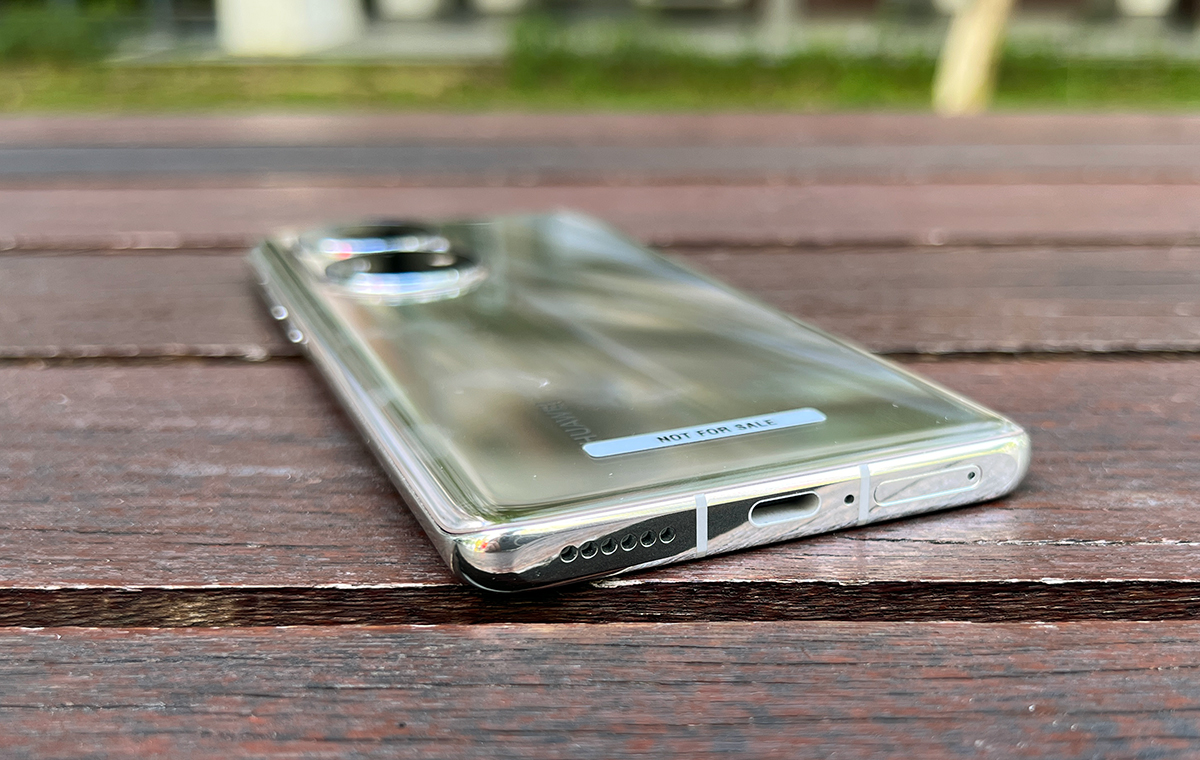 A nice improvement is P50 Pro’s speaker configuration. Huawei moved away from using a single speaker to a dual speaker setup parked across the bottom and top rungs. It makes for a sufficient, well-rounded audio experience when watching short clips on social media, but don’t expect the audio to blow you away like Oppo's flagship phones. 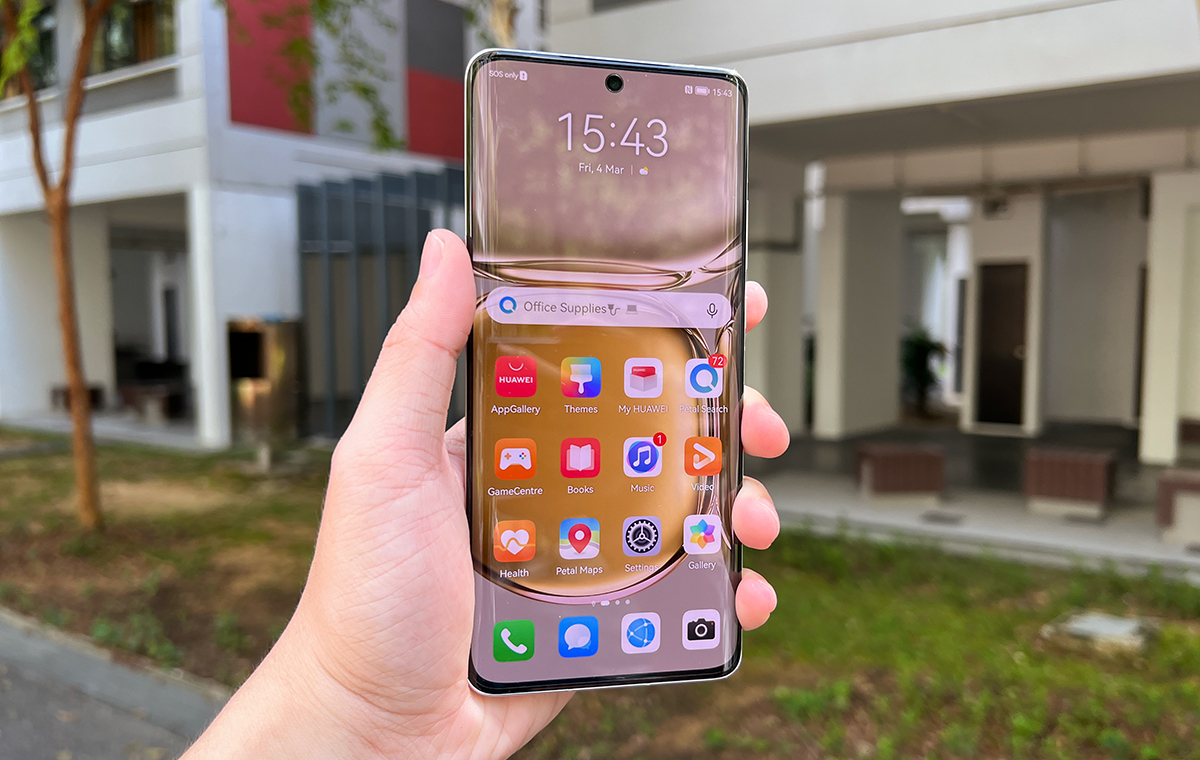 The absence of Google Mobile Services on recent Huawei handsets is well-documented. To cut to the chase, here’s the down-low on installing apps on a Huawei phone in Singapore: you need to make full use of its built-in Petal Search feature to get hold of your favourite apps from third-party app stores. 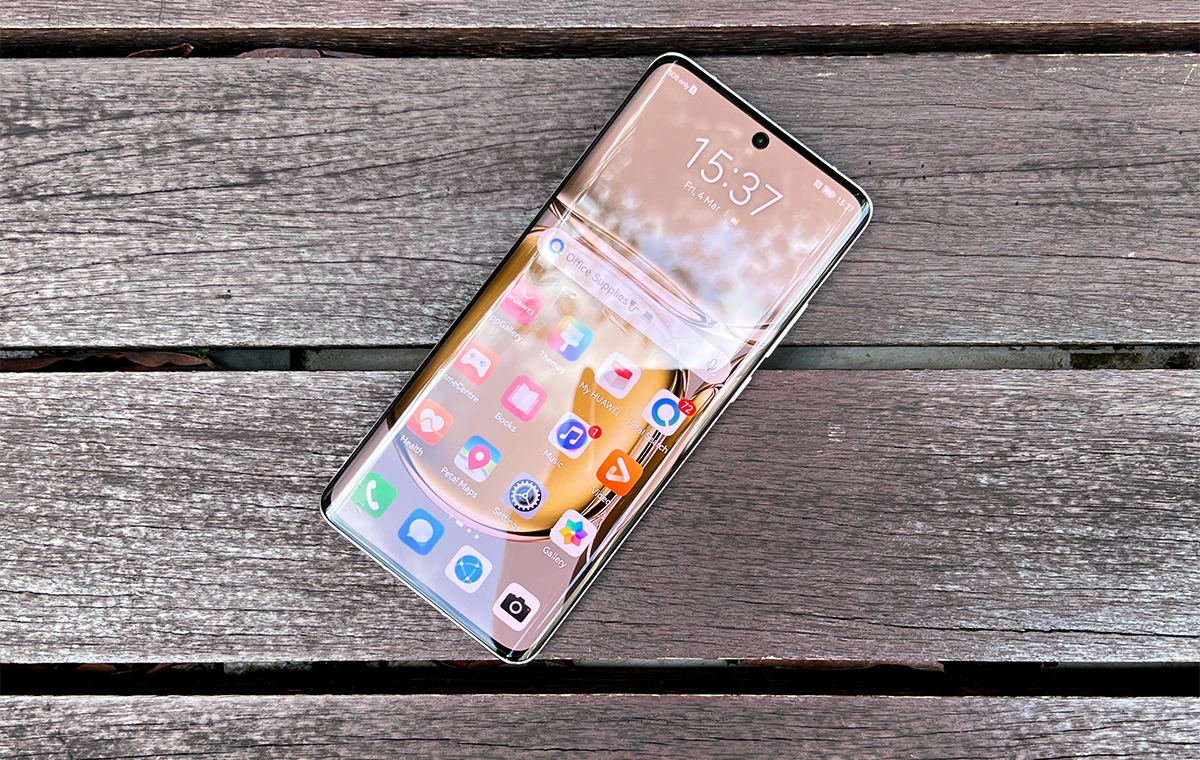 Of course, this leaves you vulnerable to glitchy, outdated, or infected APK files. But, it’s better than having a phone that can’t run much of what you usually need. Also, you can install apps that rely on Google Services (like Google Maps, Google Chrome, and YouTube), but don’t expect them to work 100%. Then, there’s also its AppGallery app store, which covers typical Android apps they’ve successfully onboarded to HMS.

The Singapore handsets (at least, the one we got for our review) run on EMUI 12 out of the box. It’s a reskin of your Android operating system (and not the pure HarmonyOS ones that are available in China). Huawei does not officially disclose which Android version EMUI 12 is based on, but further digging (by ourselves, thanks to benchmarking apps) show that it’s actually Android 11. 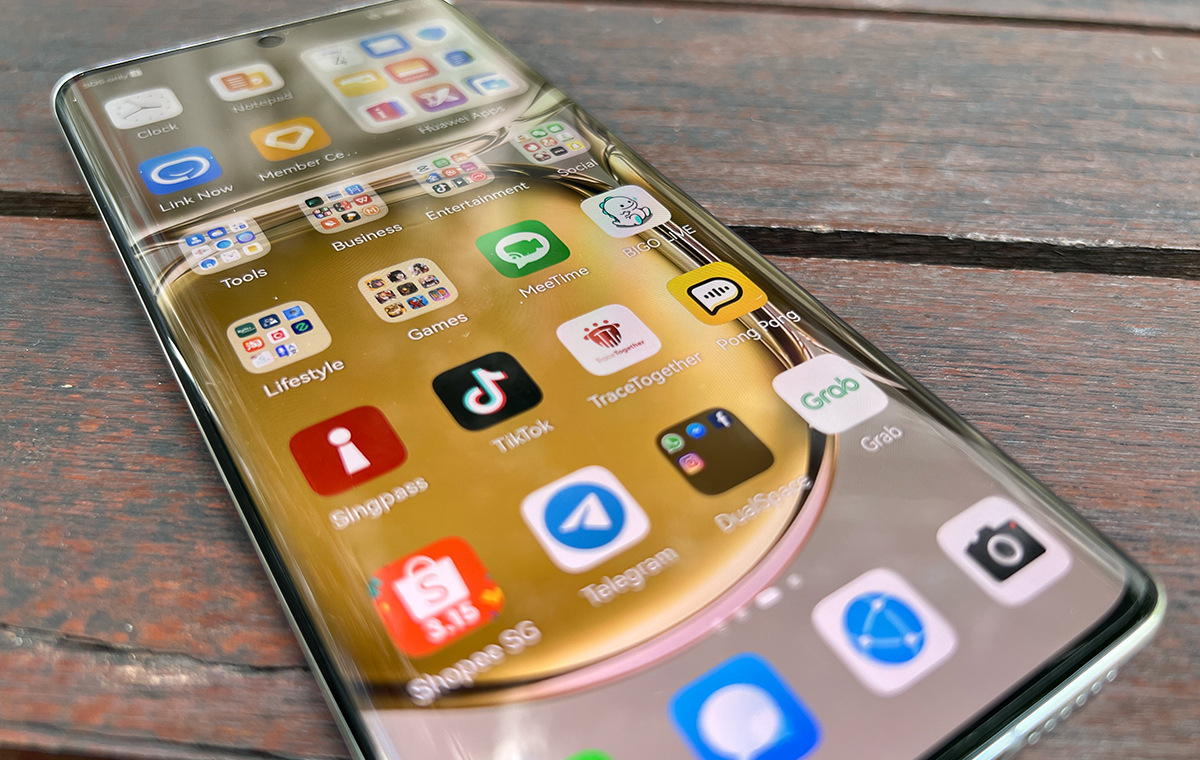 Huawei has been working at onboarding important daily apps to its AppGallery store. Important (and relatively new) ones are TraceTogether and Singpass, on top of your usual spread of banking, messaging, and entertainment apps.

We’ve already gotten used to jumping through hoops in order to make the phone work like any other Android phone. But, it requests an insane number of permissions to work as a normal device. In essence, you’ll have to give plenty of access to its HMS Core, which turns up as 10+ permission menus across nearly every core function of the phone (GPS, calls, camera, audio, data, analytics, etc.) before you even finish setting up the device.

There are also tons of requests by the P50 Pro to allow targeted advertising, which is a huge no-no in our books (you paid for the phone, not for more advertisements). Good on Huawei making it exceedingly clear on what you’re giving up to use its phones (unlike some brands), but it’s not any more reassuring if you’re mindful about what you share. It’s a real pity, given that EMUI’s UI and UX is one of the better Chinese Android interfaces out in the market.

Finally, our P50 Pro unit comes pre-loaded with insane amounts of clutter – this does not include prompts for app downloads during setup. Below are two entire folders sitting in our Home Screen, where the Huawei phone tells you these are optional apps to get (identified by the blue-coloured checkmark in the bottom right of each app icon as seen in the above screengrabs). There are six full folders of this stuff – even before we started adding our own benchmarking and test apps within.

Yes, they can be removed when you eventually get around to customising your phone, but there are no options to delete the entire folder quickly – you’ll need to remove each ‘recommended’ app individually before dissolving the folder. All that time spent could’ve been better used elsewhere.

This, together with the excessive permissions and advertising (even AppGallery shows you full-screen ads before you can start picking up apps), makes the P50 Pro easily one of the worst mobile experiences we’ve had in the last two years. Not because the Huawei interface is bad (in fact, it’s more pleasant than most reskinned Android UIs), but because other brands saw much more user-friendly progress with their Android interfaces. 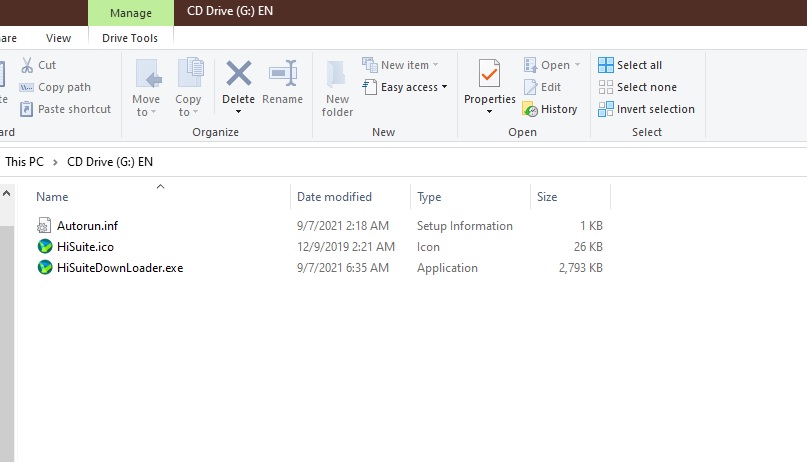 If those missteps aren’t enough nails in the proverbial coffin, the phone’s convoluted file transfer tool might just be enough to erode your patience.

The P50 Pro is one of the few Android-based phones we’ve encountered that doesn’t let you simply drag and drop files between Windows PC and mobile – you’re officially forced to use HiSuite to do any file transfers, which also means additional, unnecessary software on your PC (when Android phones typically have no issues with wired file transfers between devices).

It doesn’t help that the very nature of HiSuite (a file manager and backup programme for your Huawei phone) asks for permission to access your phone calls, contact lists, calendar details, and SMS messages. HiSuite was also ineffective at transferring files, simply stopping midway and giving up with no apparent reason. We eventually had to employ a few tricks to bypass HiSuite to make our PC to Android file transfers in the end.