It's still the same EMUI...

There's practically nothing new to say about EMUI 9.1 on the Nova 5T. It's standard Chinese Android skin fare, with no app drawer, somewhat kiddish and variegated visual language, some (manageable) bloat, and little niggles like inconsistencies in font sizes. I'm not a fan of it, but that's just me.

And that's okay - EMUI is probably not aimed at me, because I'm sure that senior folks (can I say "boomers" without getting roasted on a spit in 2019?) and non-geeks will find it their cup of tea. It's at least colourful and the icons are nicely legible, and the lack of an app drawer is still an advantage for those converting from, say, cheaper iPhones.

I do have a new rant, and that has to do with the variance of the notification toggles in Chinese Android phones. Oppo, Xiaomi, and Vivo use huge squares clearly borrowed from iOS's Control Center. Only Samsung's OneUI and OnePlus's OxygenOS are closer to stock Android.

So, when will we ever see some visual commonality?

When it entered the mid-range fray at the beginning of this year, the Honor View 20's ace up its sleeve was that it used the flagship-class Kirin 980 processor. The Nova 5T has the same chip, which should give it  a nice plus point over the competition. We'll put it head-to-head with its predecessor for reference, as well as other mid-rangers like the Qualcomm Snapdragon 670-series Vivo V15 Pro and the Google Pixel 3A XL.

The JetStream benchmark evaluates JavaScript performance over a range of real-world browsing scenarios. As expected, the Kirin 980 played second fiddle only to its Snapdragon 855 rival, which was thrown in for reference: 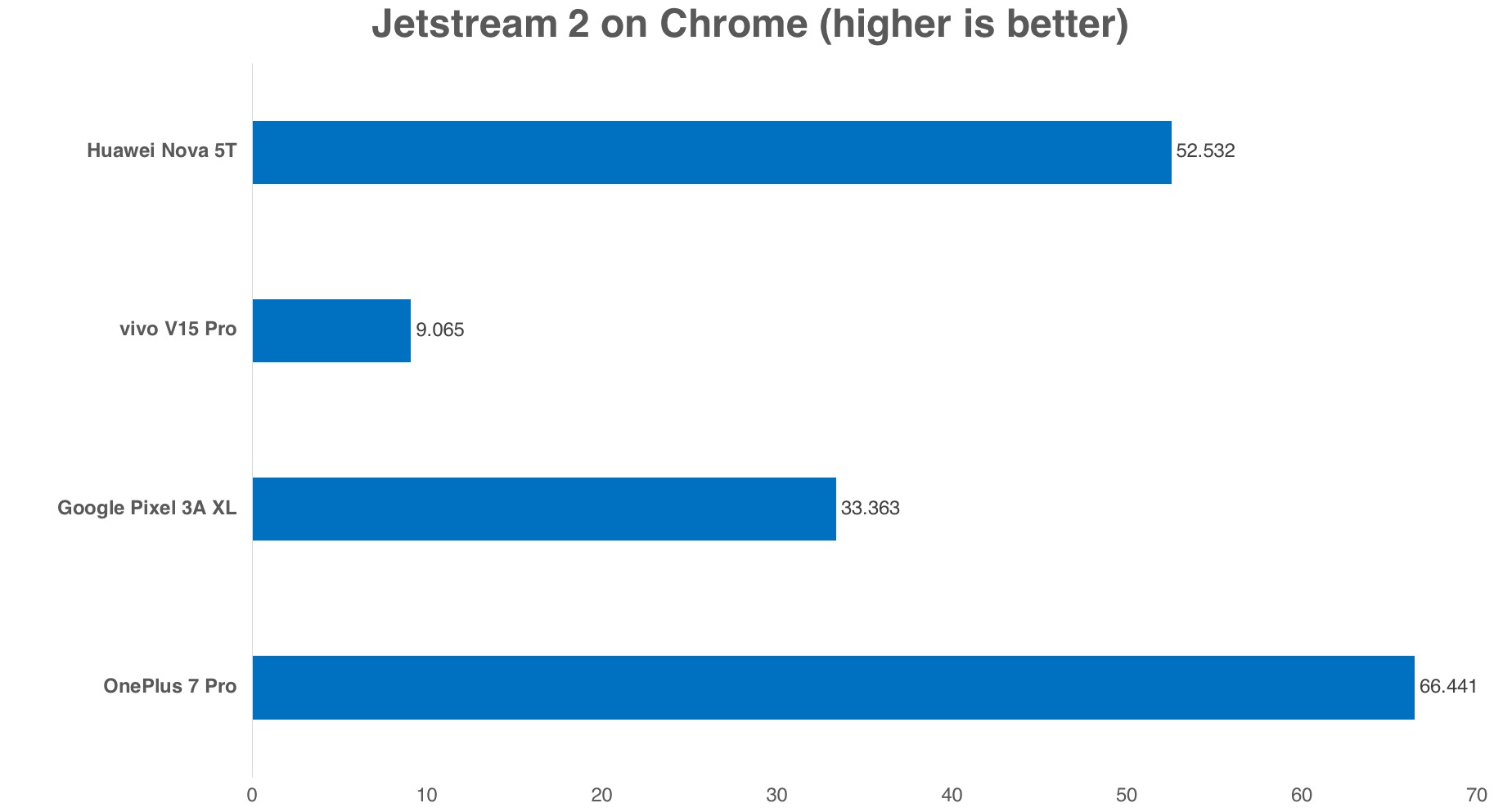 Things, however, start getting pretty interesting from this point onwards.

Both of these benchmarks measure system performance with regards to CPU, RAM, and storage speed factors. Now here's something eyebrow-raising: the Nova 5T scored worse than the Snapdragon 67x phones here - and even its spiritual predecessor!

Rubbing our eyes in disbelief, we repeated the benchmarks several times and compared it directly against the Honor View 20 to make sure we were not getting something wrong...

Wondering if storage speed could be the problem, we decided to run a round of AndroBench to compare both Kirin 980 phones. This benchmark focuses exclusively on storage performance in both sequential and random reads and writes, and we figured it would show up any speed differences in the flash storage used in both devices. (On another note, both of these phones have 8GB of RAM in their tested configurations.) 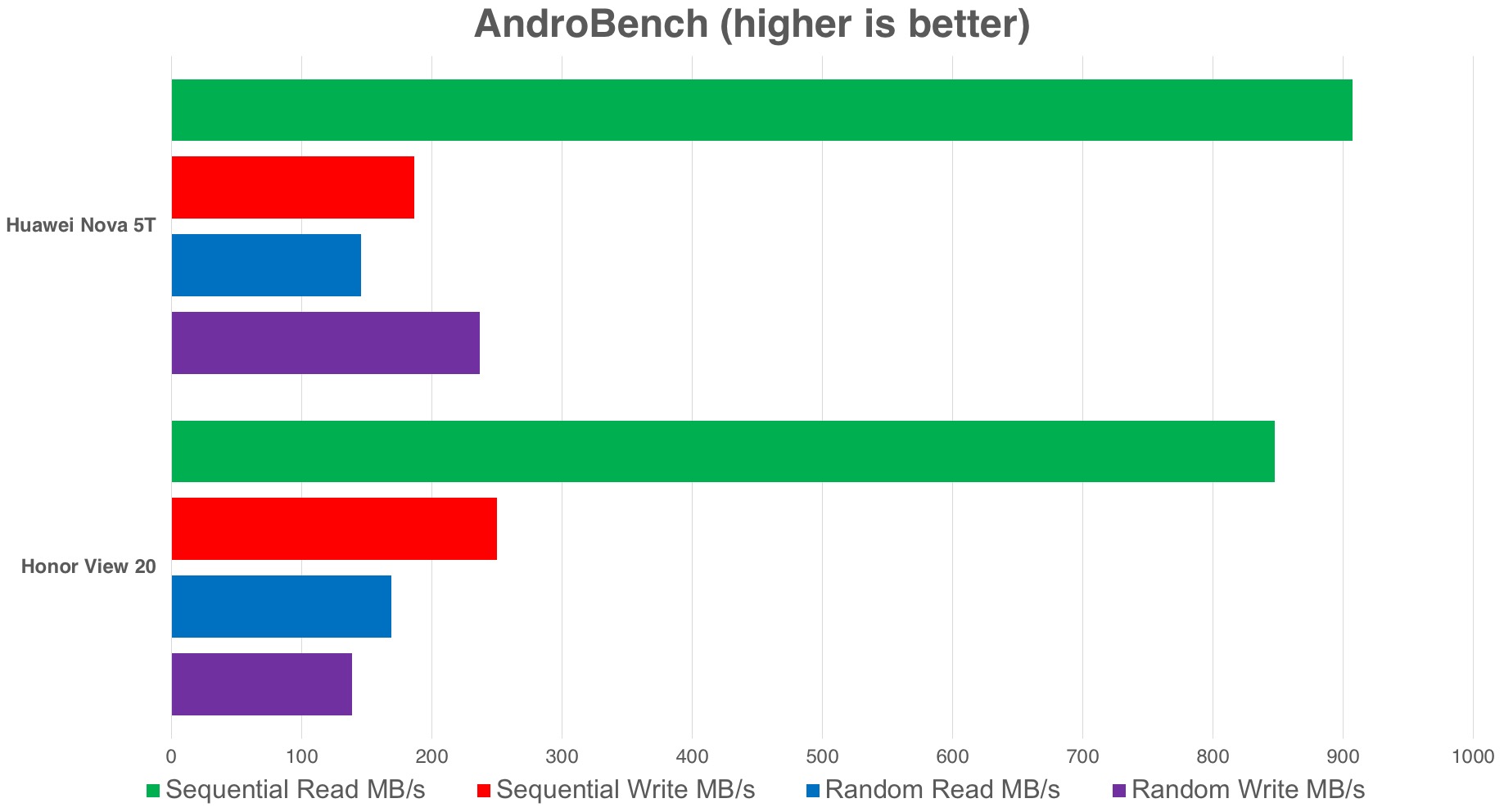 We can only chalk these weird observations up to the use of different drivers and OS optimisations. Thankfully, none of this was noticeable in real-world usage. In daily use, the Nova 5T felt every bit like a Kirin 980 device, with no discernible lag. However, it was just a little disconcerting to see these results. One can only wonder...

...but not the same battery life?

Given its 300mAh smaller battery compared to the Honor View 20, and (perhaps) the higher power drain from its Kirin 980 chip over the Snapdragon devices (and from using an LCD screen instead of an AMOLED panel), the Nova 5T didn't impress with outright battery numbers. We had no problem securing a day's worth of moderate usage, but once the display brightness was turned up, there were days when this figure seemed in jeopardy. This phone could do with a larger juice pack than a 3,750mAh battery. It's saving grace could be its speedy recharge as it has support for 22.5W Huawei SuperCharge. 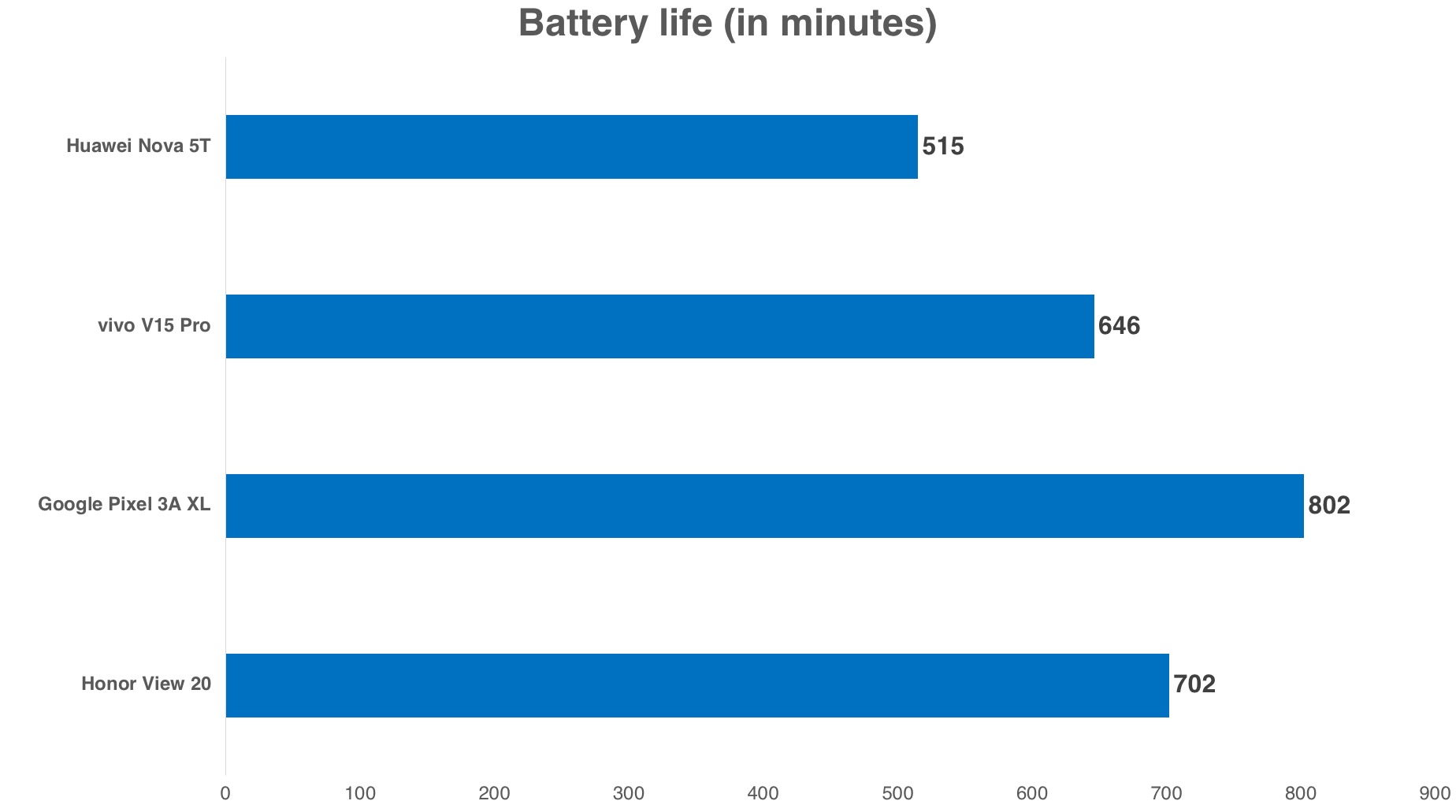