The Snapdragon 810 is a 64-bit, octa-core processor that uses ARM’s big.LITTLE architecture, comprising four ‘big’ 2.0GHz Cortex A57 cores and four ‘LITTLE’ 1.55GHz Cortex A53 cores. The Snapdragon 810 v2.1 found in the Nexus 6P is an updated version of the controversial SoC that has been dogged by reports of overheating and battery drain. Fortunately, Qualcomm has taken steps to rectify these issues in the latest version of the chip, so the phone shouldn’t become as toasty as older phones with earlier versions of the SoC. Compared to the older v2.0 SoC, the Adreno 430 GPU also sees a slight increase in GPU clock speeds from 600MHz to 630MHz.

However, this is still a 20nm chip, which means that Samsung’s 14nm Exynos processors still have the upper hand in terms of power efficiency.

Rounding out the package is 3GB of RAM and either 32, 64, or 128GB of eMMC 5.0 flash storage. In our daily use, the phone felt zippy enough and there were no perceivable stutters or slowdowns.

Here’s a look at how the phone stacks up against its main competitors before we dive into the hard numbers:

Sunspider Javascript measures the browsing performance of devices, and is a general indicator of a device’s ability to deliver a speedy web-browsing experience. We ran Sunspider Javascript on Google Chrome on the Nexus 6P, and as expected, the results fell short of the performance of the built-in browsers on Samsung’s Galaxy and Apple devices. But at 602.1ms, the result was still an improvement over other devices like the LG G4 and was significantly better than last year’s Motorola Nexus 6.

However, we wouldn’t worry too much about the seemingly large gap between the Nexus 6P and the flagship Samsung and Apple phones, with their sub 350ms scores. In real-world use, browsing on Google Chrome on the Nexus 6P felt sufficiently zippy and loading times were fast enough for us. 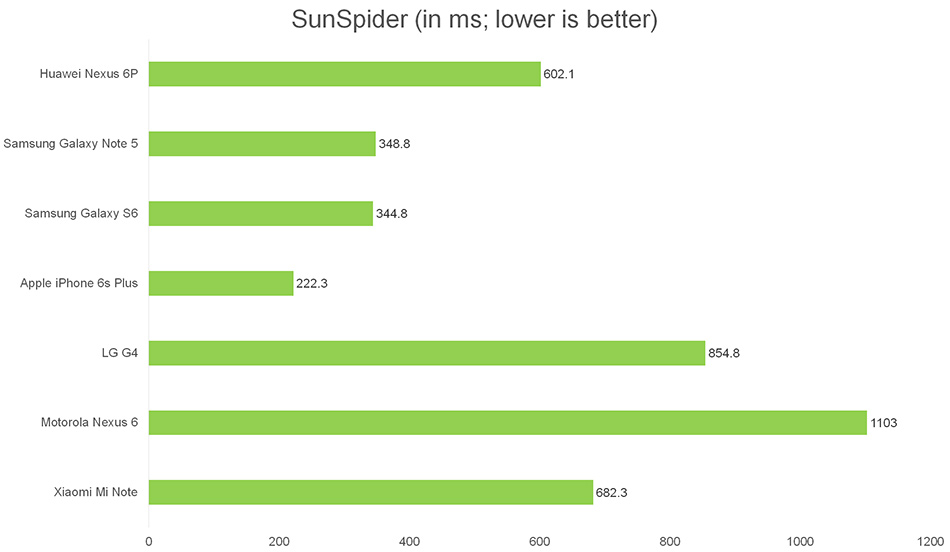 Quadrant benchmarks a device’s CPU, I/O, and GPU performance. The latest crop of Samsung phones came ahead here, possibly due to their faster UFS 2.0 storage, which boasts much improved sequential and random read/write speeds over the eMMC 5.0 flash used in the Nexus 6P. That performance gap can also be attributed to superior performance on the part of the Exynos 7420 SoC in the Samsung phones.

However, the Nexus 6P left the Nexus 6 in the dust, and performed slightly better than the LG G4 and Xiaomi Mi Note, which use less powerful Snapdragon 808 and 801 SoCs respectively. 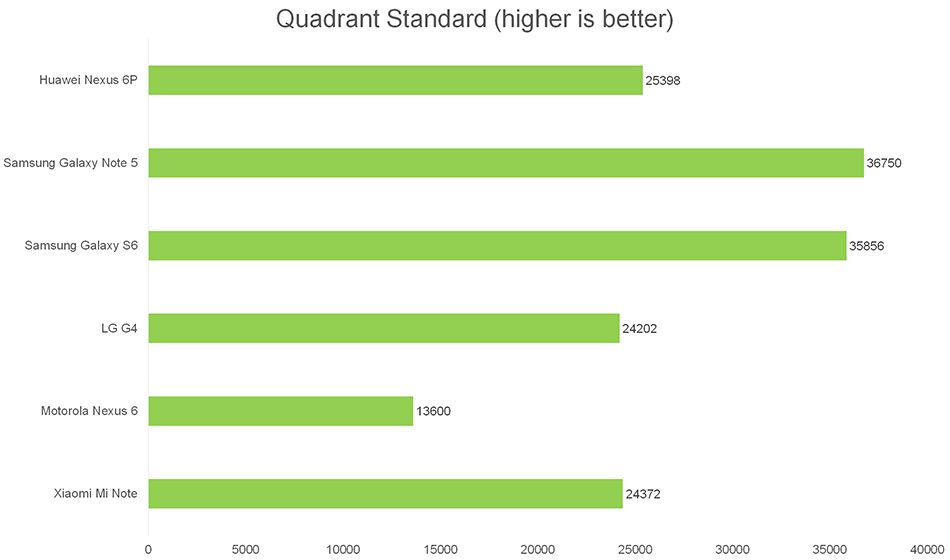 We ran 3DMark’s Ice Storm Unlimited test, which uses a mix of graphics and physics tests to measure hardware performance. The first test measures the GPU’s ability to process lots of vertices, while the second does the same thing with lots of pixels and post-processing effects. Finally, the physics test switches the load to the CPU to test its ability to process physics simulations, while keeping GPU load low.

The Nexus 6P came out strong here, even outstripping the Mali T760 MP8 GPU on the Samsung phones. It was topped only by the new A9 processor in the iPhone 6s. Part of its performance can probably be attributed to the speed bump the Adreno 430 GPU received on the updated Snapdragon v2.1 SoC. Even though the Mali T760 MP8 is clocked even higher at 772MHz, it was still slightly behind the Adreno 430. 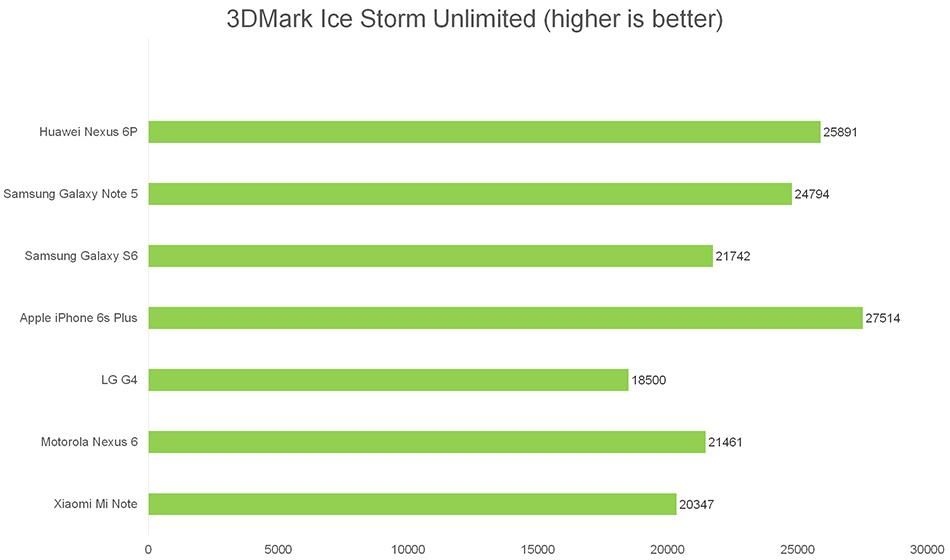 A long line of sub-par cameras on previous Nexus phones has taught us not to expect too much from the camera on a Nexus phone. That changes somewhat with the Nexus 6P, and for the first time, a Nexus phone has a camera that doesn’t perform like a fish out of water compared to other flagships.

The 12.3MP shooter on the rear comes with laser autofocus and is significantly better than previous Nexus cameras. 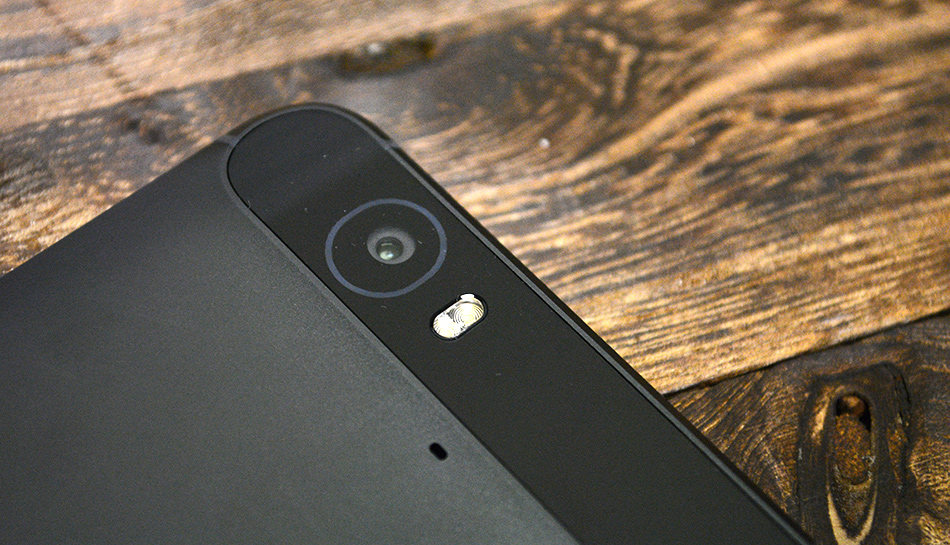 In a controlled environment like the below photo, the Nexus 6P certainly does well enough. Color reproduction appeared fairly accurate, and we’d be hard-pressed to pick out any major flaws compared to similar shots taken by the other top-end phones. The text on the vodka bottle was also nice and sharp, even though we were focusing on the center of the picture. 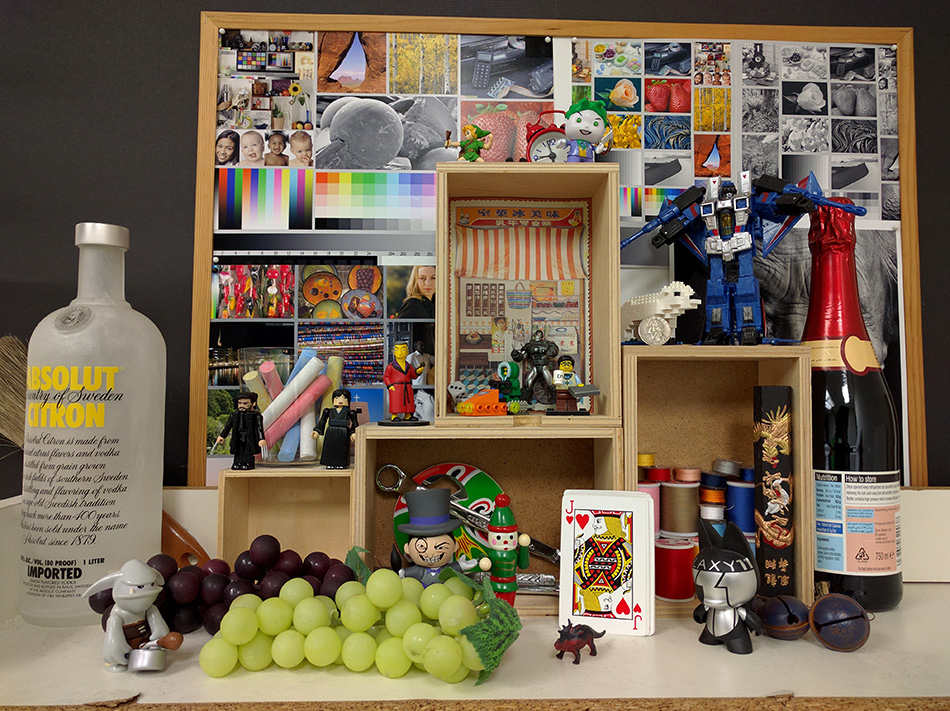 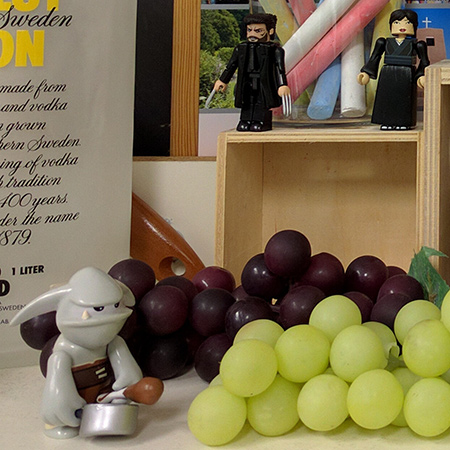 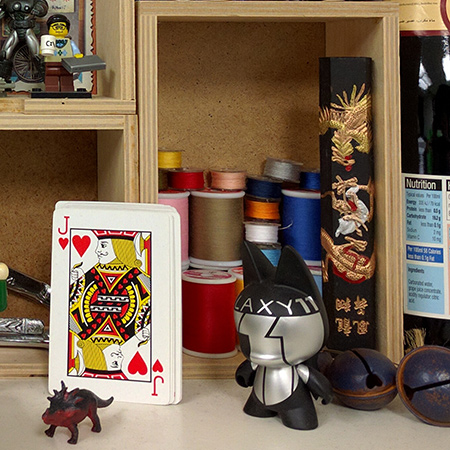 We also liked the camera’s ability to focus on close-up objects while naturally blurring out the background. In fact, this seemed to work better than the built-in lens blur function, which supposedly helps you keep a subject in focus while intentionally blurring the background. In the below shot taken without lens blur, tapping on the owl to focus keeps it sharply in focus while the figures in the back take on noticeably softer edges. 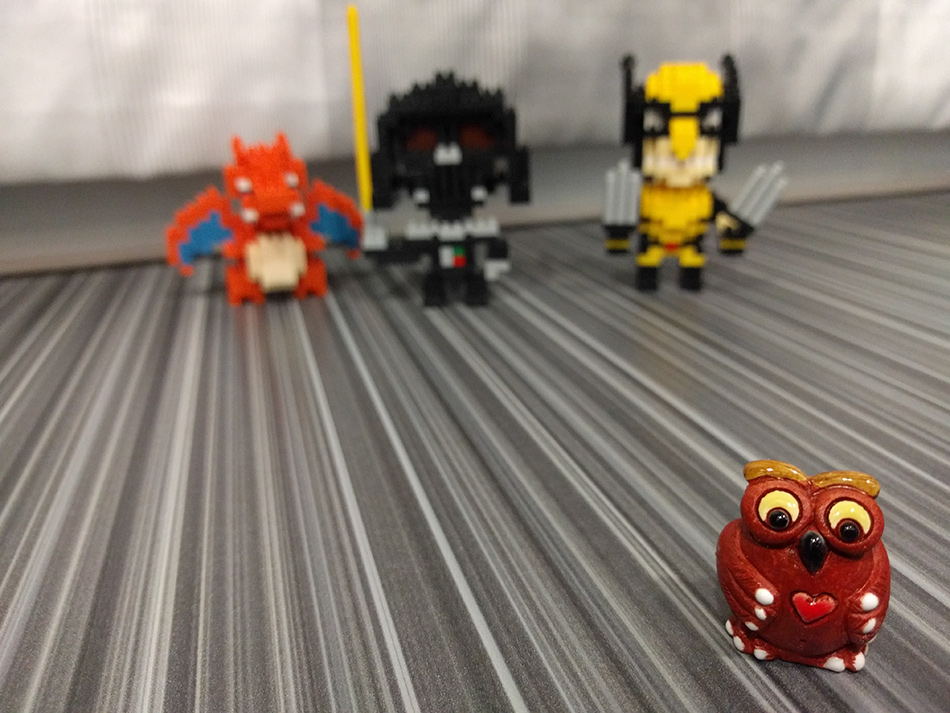 All pictures were taken with HDR+ mode turned off. In our experience, pictures turned out better without it as its ability to properly balance light and shadow appeared wonky and imperfect.

Furthermore, it is slightly disappointing that the camera doesn’t come with optical image stabilization (OIS), which essentially helps you take clearer shots by moving the sensor in the opposite direction of the destabilizing motion to compensate for it.

Google has actually said that the large 1.55μm pixels sensor would eliminate the need for OIS because the sensor is capable of capturing more light, thus reducing the need for slower shutter speeds – the main culprit of blurry photos. However, while the camera was adequate most of the time, we found that our shaky hands were occasionally just too much for it. It’s no calamity, but it makes it such that the Nexus 6P’s camera is still a small step below the best in the market. In other words, it’s a good camera missing a few key ingredients to be considered top-notch.

When it comes to battery life, the sizeable 3,450mAh non-removable battery on the Nexus 6P looks like it should outperform the Galaxy Note 5’s smaller 3,000mAh battery, but that isn’t quite the case.

Our battery test adhered to the following parameters as usual:

The Nexus 6P lasted 704 minutes, just over three hours behind the Galaxy Note 5. And although it did better than the phones with much smaller batteries like the Galaxy S6 and iPhone 6s, it was barely on par with the 3,220mAh battery on the older Nexus 6. 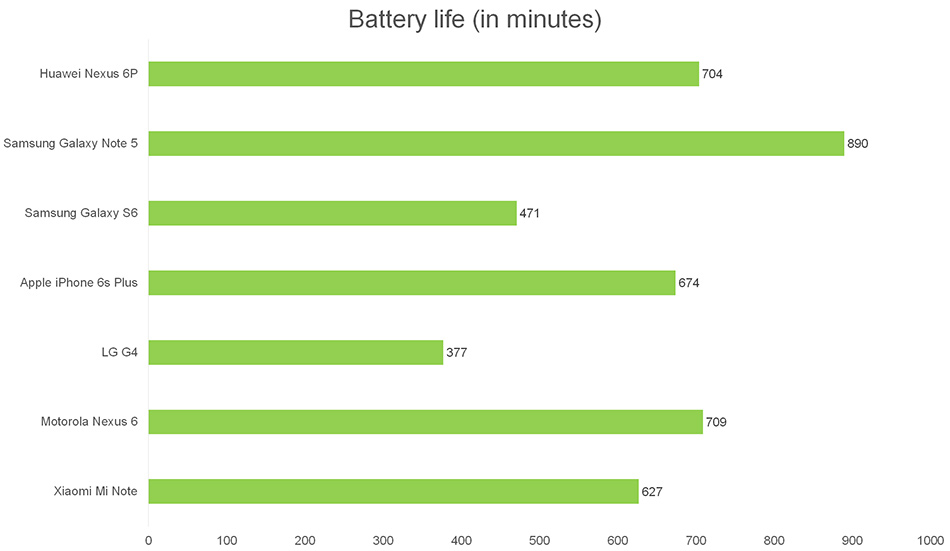 Because the Nexus 6P has the same screen size and resolution as the Note 5 and also a larger battery, the three-hour gap is especially jarring. It’s even safe to assume they use the similar, if not identical, display panels as Google already confirmed that the phone uses the latest Samsung panels. So if differences in display power consumption is kept to a minimum, the Nexus 6P’s lackluster performance is likely due to the Snapdragon 810 v2.1 processor’s inability to keep up with the efficiency of the Exynos 7420. And given the 810’s record of heat and battery drain issues, this is probably that SoC’s handiwork we’re seeing here.

However, hard numbers aside, you probably aren’t going to spend hours on end looping video, and the Nexus 6P has more than enough juice for a full day of regular use. Marshmallow’s Doze feature also seems to be working well, and the battery only dropped by 5% overnight, a really good result. And instead of Qualcomm’s Quick Charge 2.0 standard, it relies on the 15 watt USB Type-C charger, which takes about 1 hour and 40 minutes (give or take) to get it up from zero to a full charge. Wireless charging support is also missing here – not a major problem for us, but possibly a minor niggle for those of you who already own wireless charging pads. 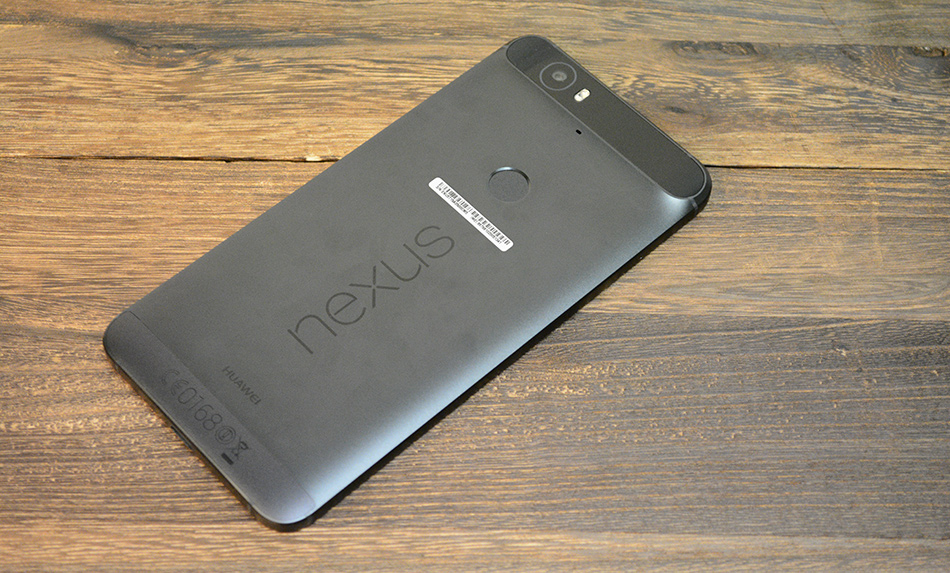 When all’s said and done, the Nexus 6P still manages to hold its own against the best, and that in itself is actually a larger compliment than it seems. Nexus phones don’t have a history of aspiring to the top, and now that Google and Huawei seem to be trying to do that, they come really close. The Nexus 6P may not have the absolute best hardware, but its stellar build quality, good camera, and buttery-smooth stock Android experience make it deserving of a seat at the table of “premium” phones.

In fact, it seems like Google is starting to do with its Nexus phones what Microsoft did with its Surface devices. Microsoft irked its hardware partners by becoming a competitor of sorts itself when it released the 2-in-1 Surface hybrids. And even though the Surface devices got off to a shaky start, the excellent Surface Pro 3 – and now the Surface Pro 4 and Surface Book – are neck-and-neck with the best devices from other manufacturers.

Similarly, even though stock Android is and has always been a great piece of software, Nexus phones were always deeply flawed in some way, be it terrible battery life or an abysmal camera. But with the Nexus 6P, Google and Huawei appear to have hit on a winning formula. For the first time, a Nexus phone can be appreciated as the sum of all its parts – both hardware and software.

The Nexus 6P might just be Google’s own Surface Pro 3 moment, when it truly transitioned from software vendor to hardware competitor. And just as Microsoft’s Surface hybrids are intended to showcase Windows 10 and inspire hardware partners to new and better designs, so is the Nexus 6P a triumphant demonstration of the capabilities of Android 6.0.

Google and Huawei’s latest phone further serves as a cheery indicator of what to expect from future Nexus phones. If Google is finally taking hardware seriously, and if the Nexus 6P is already this good, we can’t wait to see next year’s Nexus phone. We just might get a phone that we can call the best.

Write a Review
Compare This | Specifications
Good overall performance
Android 6.0 is buttery-smooth and easy to use
Excellent fingerprint sensor
Great imaging performance for a Nexus phone
Beautiful all-metal build
Black camera bar on the back may not appeal to some
Average audio
Battery life could be better
Sponsored Links