To evaluate the performance of the Huawei MateBook X Pro, we will be comparing its performance against the current crop of ultraportable notebooks like Huawei's own MateBook 13, the ASUS ZenBook 14 UX434, Dell XPS 13 2-in-1, and HP Spectre x360. Here are the configurations of the tested notebooks and how they stack up. It will be interesting to see if the thinner chassis of the MateBook X Pro will affect performance in any negative way.

Overall, it’s quite clear that the MateBook 13 is the better performer. Its advantage in graphics-intensive workloads and games is clear. My guess is that the slightly thicker chassis of the MateBook 13 enables it to handle the heat from its CPU and GPU better, therefore allowing its CPU and GPU to run faster for longer. The MateBook X Pro, on the other hand, has better burst performance but that advantage goes away quickly as heat builds up within its thinner chassis and the notebook is forced to throttle. This could explain why, on PCMark 10, it had the best scores on the Express workload and its worst score on the Extended workload. 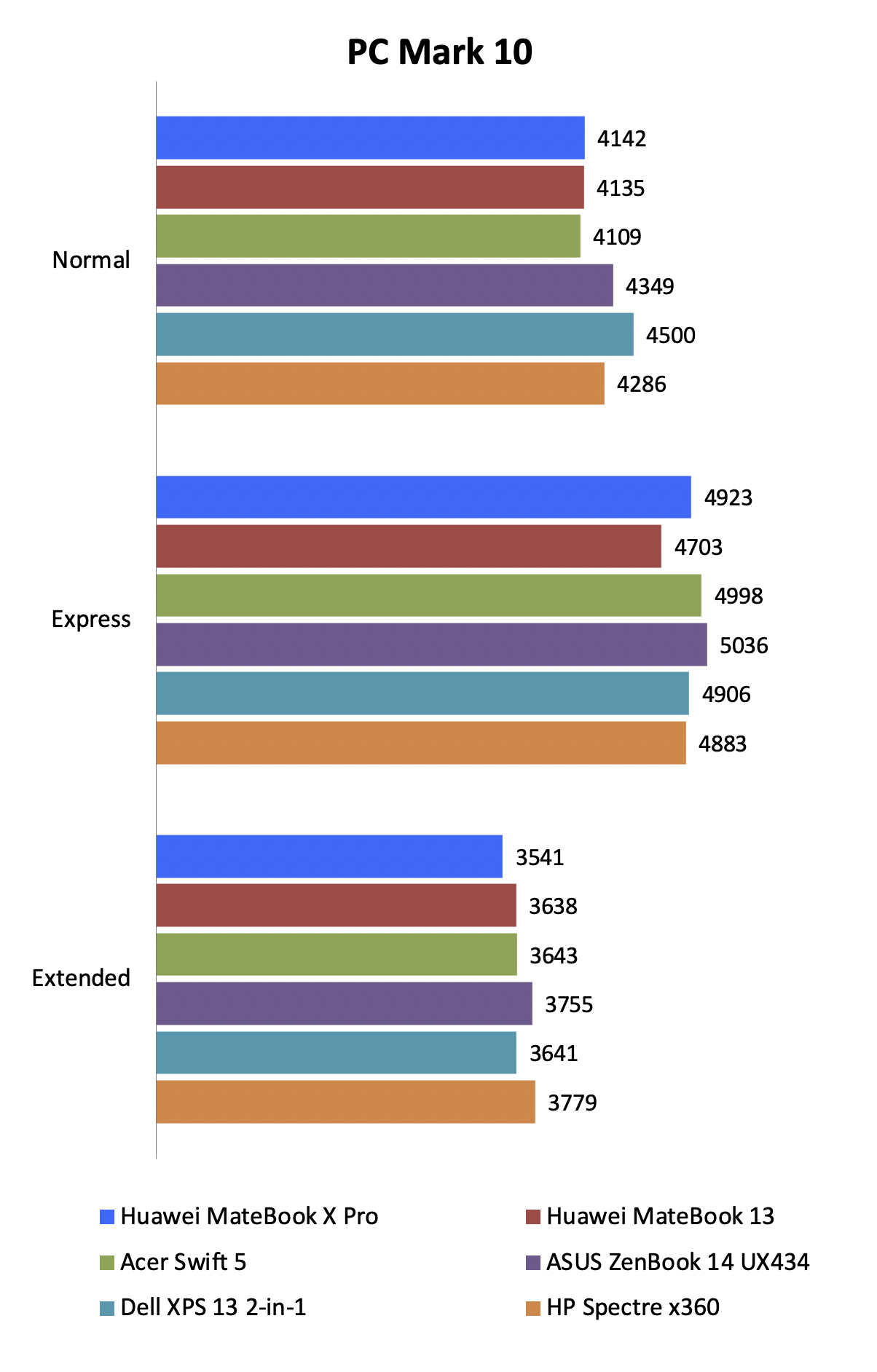 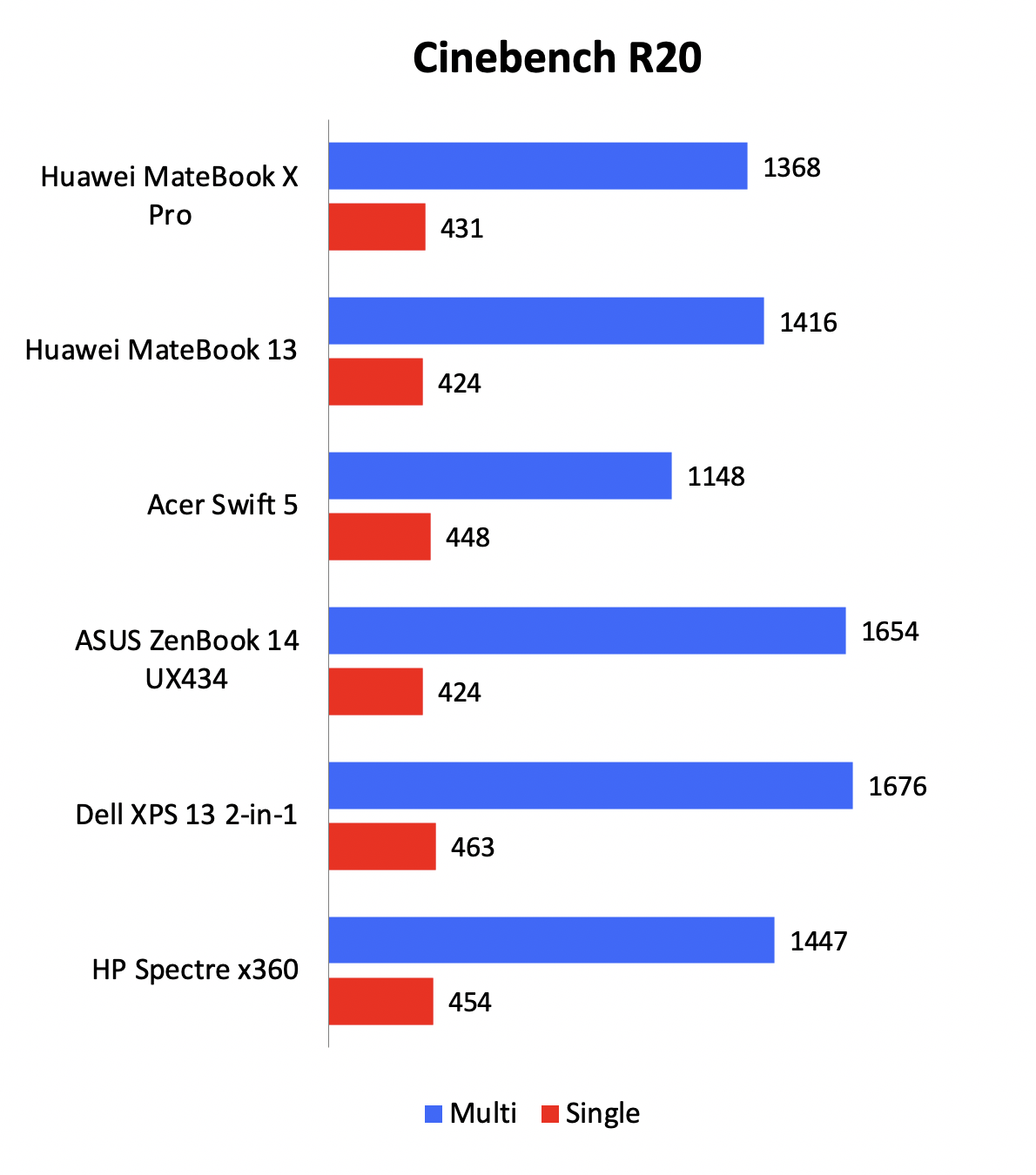 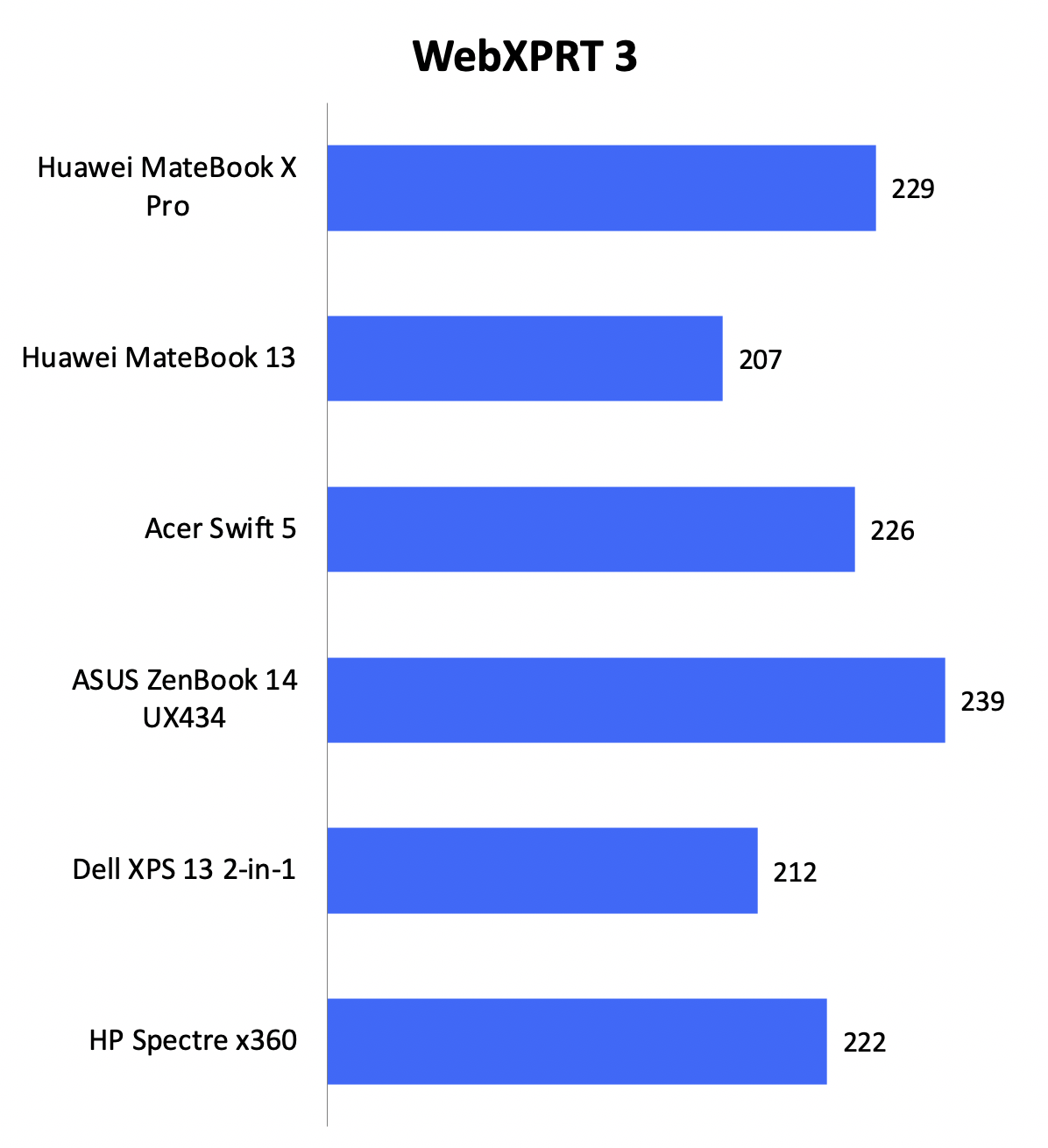 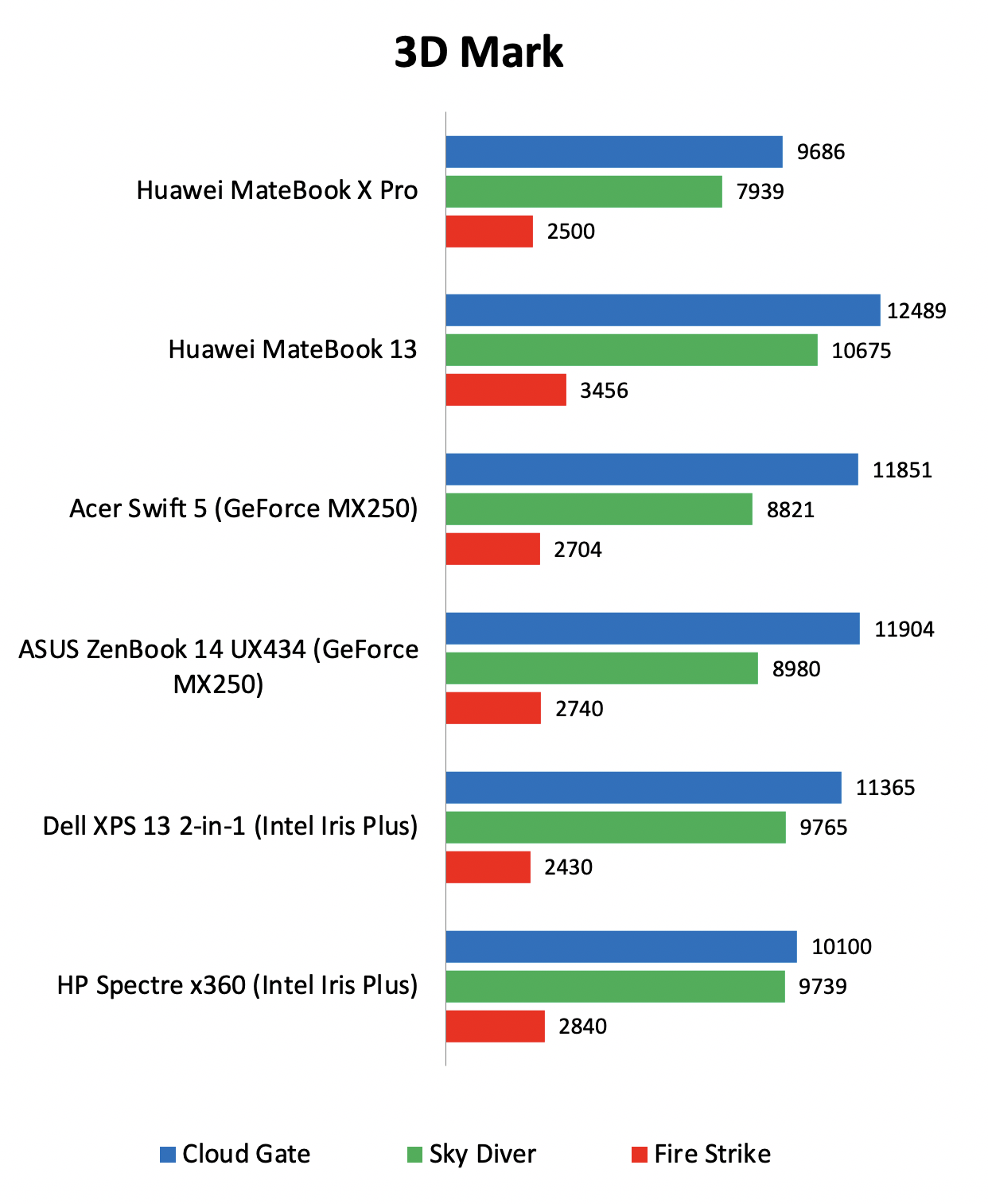 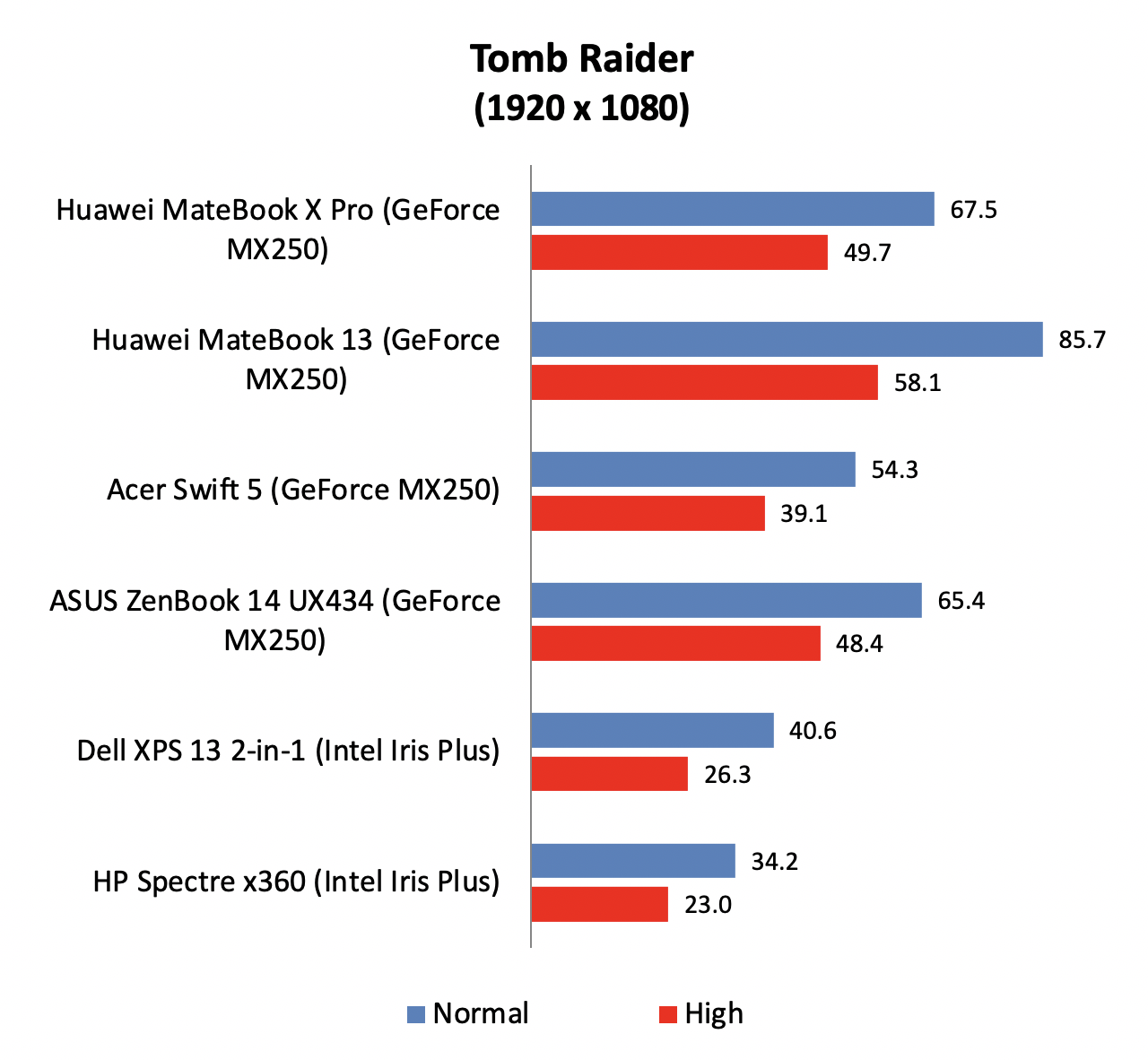 Battery life was quite impressive for a thin and light notebook with a high-resolution 3K display. To be fair, the MateBook X Pro’s battery is on the slightly larger side (56Wh) but it still managed 373 minutes or 6 hours and 13 minutes on the Modern Office workload. That’s more than most of its competitors. This is really remarkable considering how sharp the display is and how bright it gets. Also impressive is that it almost lasted two whole hours on the more intensive Gaming workload. Looking at the power consumption figures, we can see that it’s perhaps lower than expected, especially on the Gaming workload. Here, it was only consuming around 30W of power, which is lesser than its rivals and lends credence to my theory that the MateBook X Pro’s performance is heavily throttled.

Unfortunately, despite the long recorded battery life, the MateBook X Pro’s Portability Index score was average. This has to do with its overall dimensions and weight. Its 13.9-inch display means it footprint is a little larger and at 1.3kg, it’s one of the heavier ultraportable notebooks. Nevertheless, I still think it’s a very portable machine. 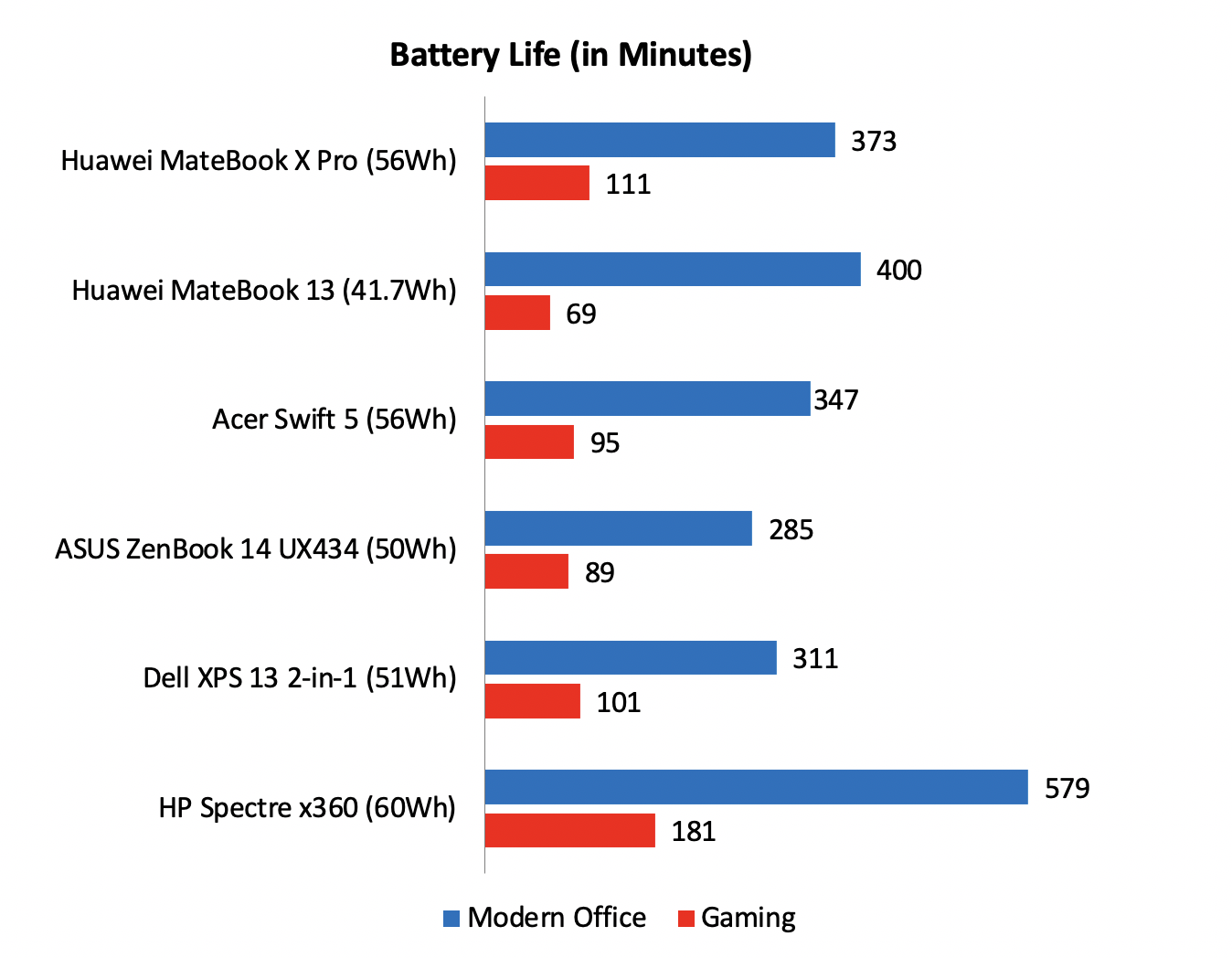 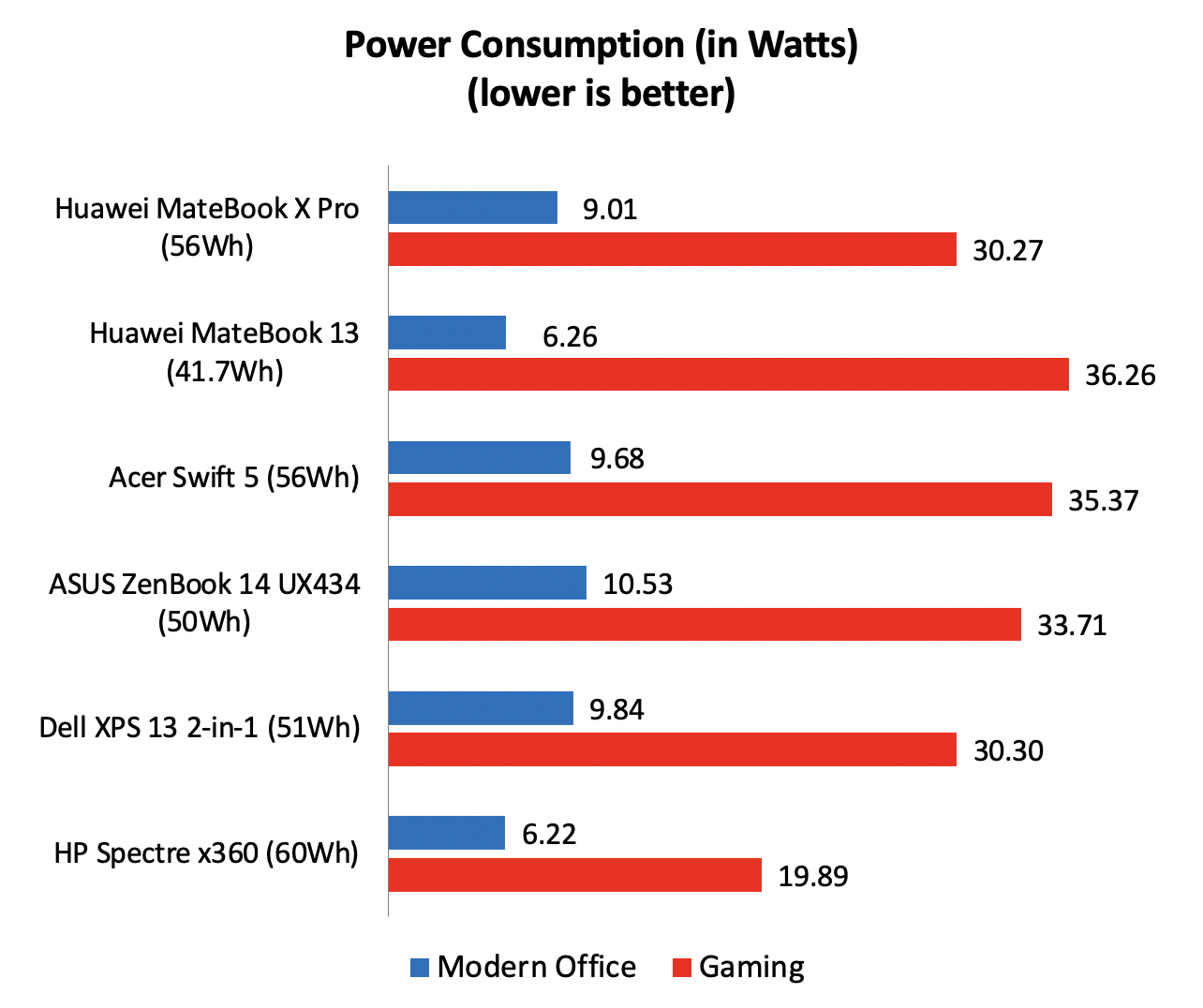 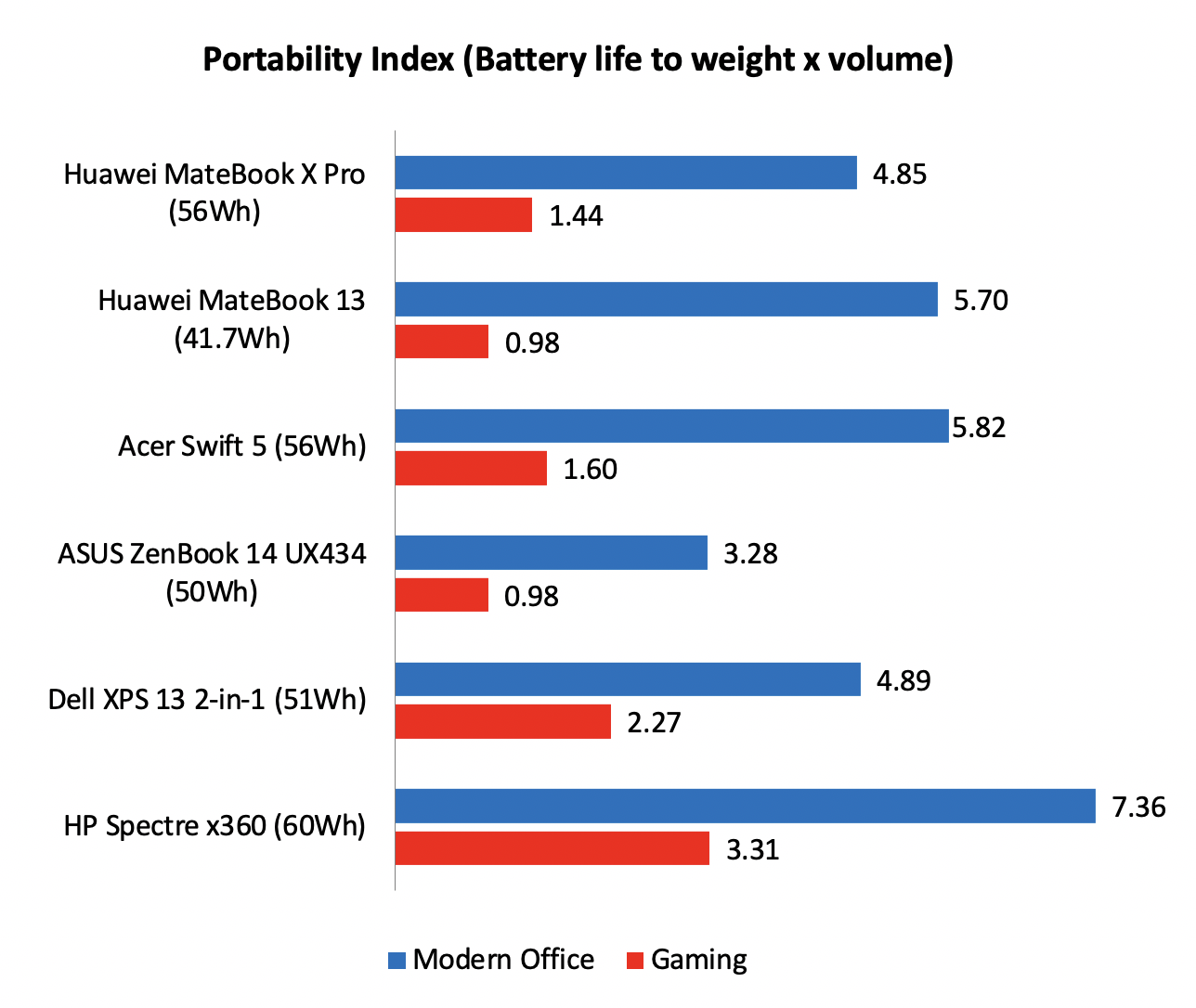 Undone by its sibling 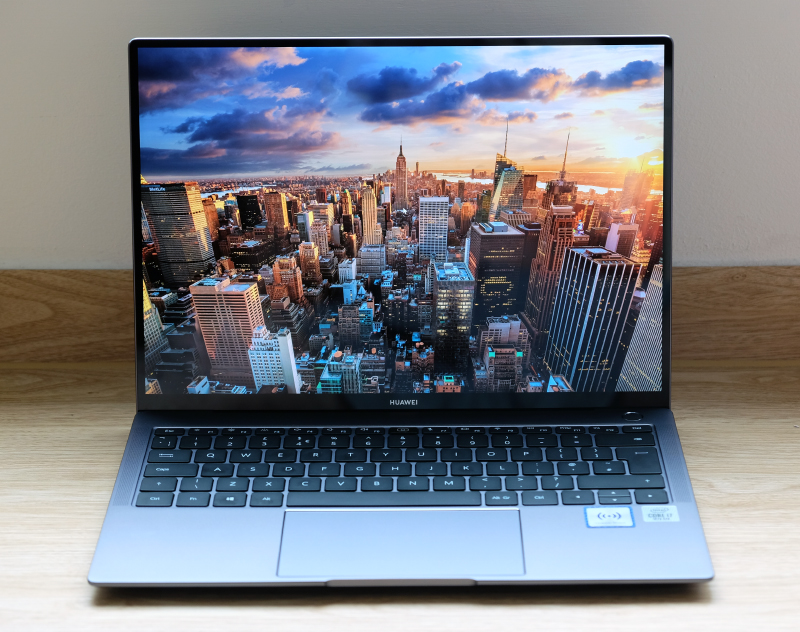 The MateBook X Pro has a lot going for it. It’s well-built, the display is superb, connectivity options aren’t bad, it has an interesting webcam implementation, and it has a massive and fluid trackpad. Insofar as premium ultraportable notebooks are concerned, it’s a very solid option that will give contenders from rivals like Dell and HP a run for their money.

Write a Review
Compare This | Specifications
Superb 3K display
3:2 aspect ratio
USB-C and USB-A ports
Large, fluid trackpad
Fantastic unibody aluminium build
Good battery life with hi-res display
No support for Thunderbolt 3
No support for Wi-Fi 6
Significant performance throttling
Webcam not in the best position
The MateBook 13 exists
Our articles may contain affiliate links. If you buy through these links, we may earn a small commission.
Sponsored Links