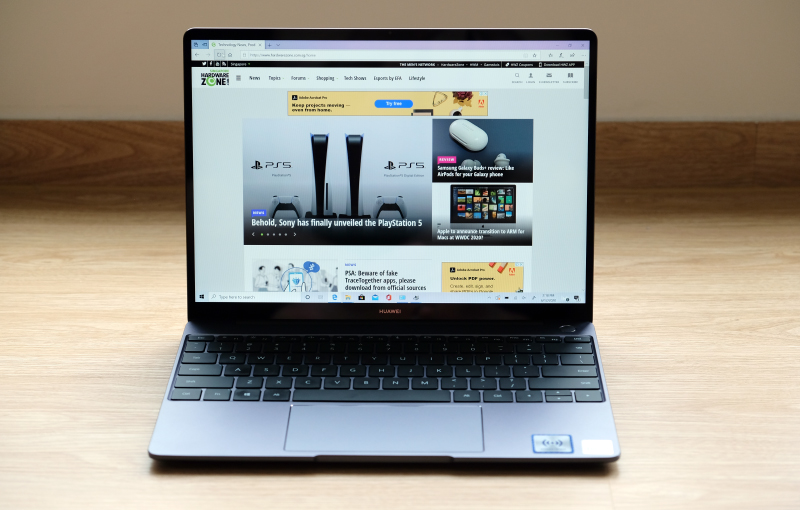 Yes, the Huawei MateBook 13 looks like a MacBook Pro. Side by side and with their logos removed, I think it will be hard to tell which is which. But to dismiss it simply because it looks like a MacBook Pro would mean missing out on one of the most interesting and value for money 13-inch notebooks you can buy today because it does somethings differently and I think it can be a really compelling notebook for some people. The Huawei MateBook 13 will only come in a single configuration, and luckily, it’s a decent and sensible one. You get the following:

Now, before you go off wailing that it doesn’t come with a Core i7 processor, get this, the MateBook 13 with these specifications is only S$1,598. You’d be hard-pressed to find a notebook with comparable specifications for the same amount of money. Furthermore, for most people, a Core i5 processor is sufficient and there’s little benefit in having a Core i7 processor for this class of notebook especially when there’s discrete graphics to back it up. 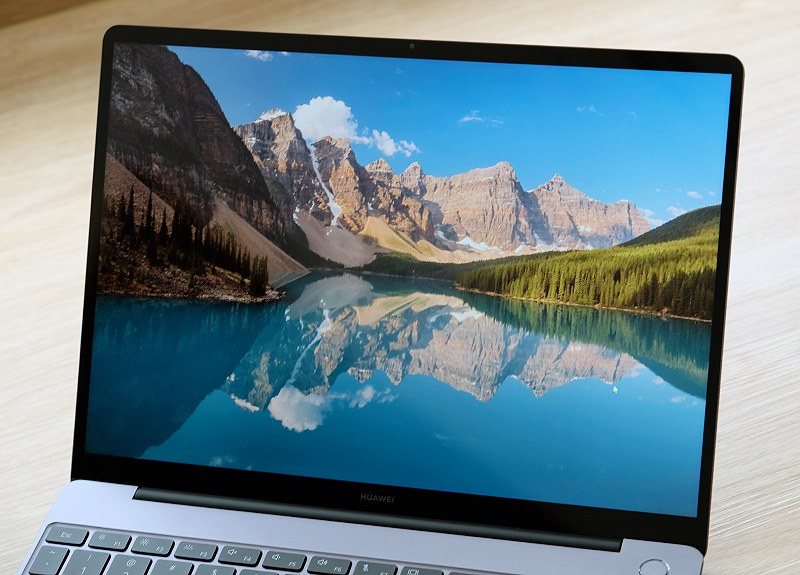 The design is nothing groundbreaking. As I said, the MateBook 13 looks just like a MacBook Pro. It even comes in an almost identical shade of grey. Curiously, Huawei also calls the colour space grey. The chassis is aluminium alloy but it isn’t an unibody construction like the MacBook Pro. Still, it feels strong and sturdy. The footprint is relatively compact and the MateBook 13 itself is quite slim and light. Maximum thickness is just 14.9mm and weight is handy 1.3kg. While there are slimmer and lighter notebooks around, at least the overall build quality is top-notch.

One unique aspect about the MateBook 13 and makes it truly different from all other 13-inch notebooks in the market is the display. It’s not that it’s super sharp or fast but it has a 3:2 aspect ratio. This isn’t the first 13-inch device to have such a display. The Surface Pro has had a 3:2 aspect ratio display for years but it’s only now that we see it adopted by a notebook. The upside to such an aspect ratio is that it greatly benefits productivity apps because you have more vertical space which makes it easier to read documents, spreadsheets, and even website. 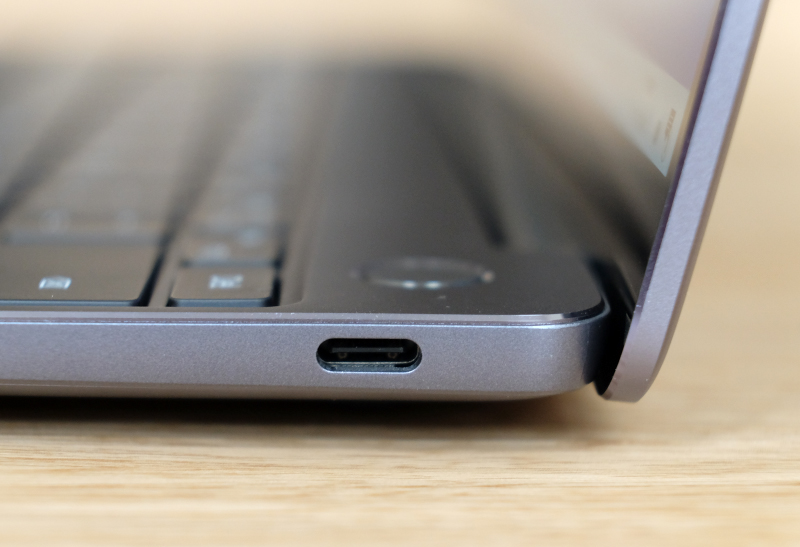 The 13-inch display itself is also nice. It has a resolution of 2,160 x 1,440 pixels which gives it a pixel density count of just about 200 pixels per inch – just 27 pixels shy of the MacBook Pro’s 227 pixels per inch count. It’s sharp, crisp, and the colours are sufficiently vibrant and punchy. Maximum brightness is a claimed 300 nits. To my eyes, I found it be slightly above average in this regard compared to most other notebooks of the same class. It supports touch inputs too and I found it to be accurate and responsive. The bezels are fairly thin. But thankfully, the webcam is still positioned above the display. The webcam is only a single megapixel and it’s nothing much to write about. Images are fuzzy and kind of bland, but at least it gets the job done. You’ll want a standalone webcam if image quality is important to you.

Connectivity, both in terms of wireless standard and physical ports, is perhaps the most disappointing aspect of the MateBook 13. On the wireless front, it doesn’t support Wi-Fi 6, only Wi-Fi 5 (802.11ac). It’s perplexing because almost all new Windows notebook released this year do. To be fair, Apple’s newest MacBooks don’t either and the performance of Wi-Fi 5 is mostly still adequate. So in the grand scheme of things, unless you happen to have a Wi-Fi 6 router (which happens to be still quite pricey), this isn’t something you’ll necessarily miss. 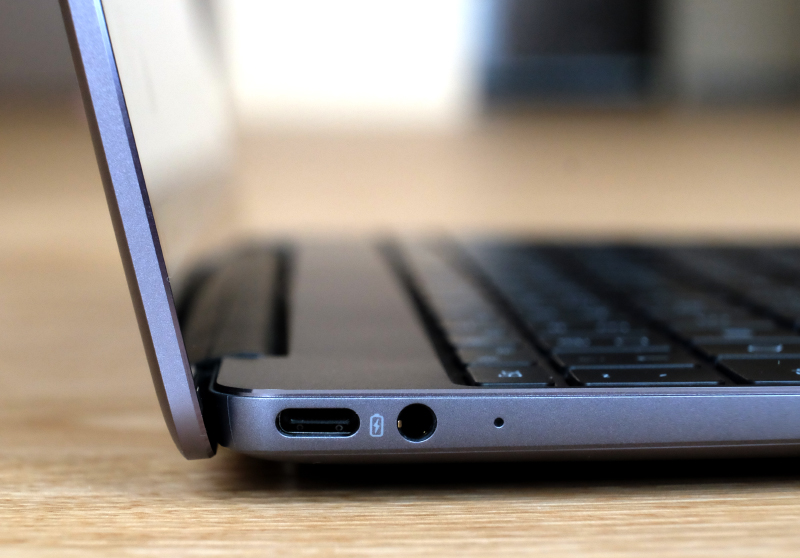 As for physical ports, there’s only two USB-C ports and they aren’t Thunderbolt 3 ports. Instead, they only support USB 3.1 Gen 1 (that means up to 5Gbps). Furthermore, only the left port can be used for charging. The port on the right only does data transfer. Having just two ports isn’t the end of the world but the lack of Thunderbolt 3 support is a bummer because it denies you the ability to use high-performance accessories such as Thunderbolt 3 external storage drives and external graphics docks. There's also no memory card reader of any sort. 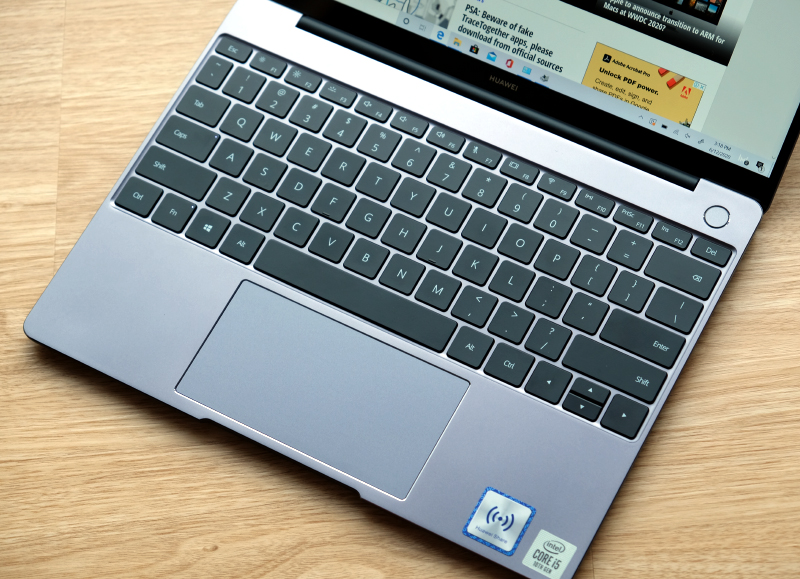 The keyboard is decent. The keys are full-size and the layout is sensible, though readers preferring an inverted T key layout for the arrow keys will be disappointed to find that Huawei has opted for half-size up and down arrow keys and full-size left and right arrow keys. The keys themselves are perhaps not as tactile as I would have liked but at least the amount of key travel is sufficient an the overall feel is satisfactory. The power button doubles up as a fingerprint scanner for quick and secure logins. 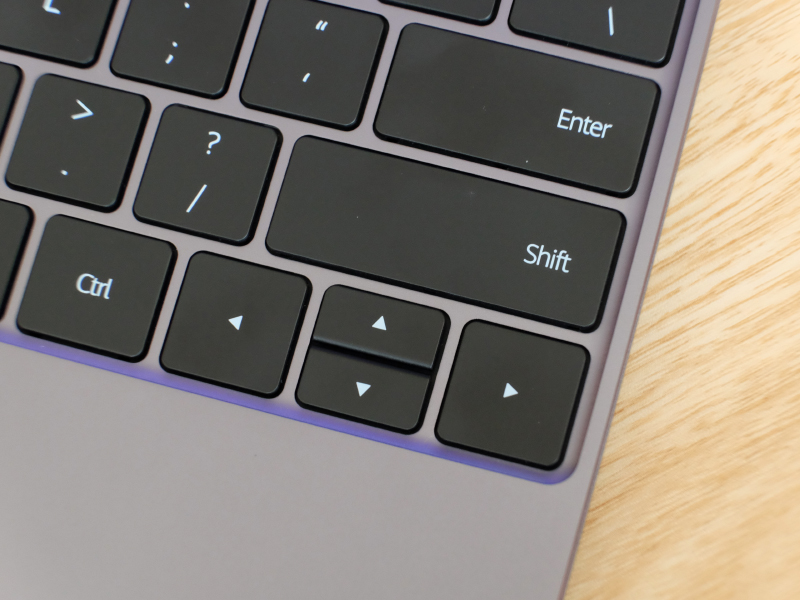 Despite the MateBook 13's rather compact dimensions, the trackpad is rather large. Measuring 12cm across and 6.5cm from top to bottom, it’s actually one of the larger trackpads in its class. Curiously, the surface of the trackpad feels a bit sticky at first so your fingers don’t glide smoothly. Thankfully, that feeling goes away after a few days of use. Now, it feels smooth. And because it uses Windows Precision drivers, overall, the trackpad is fluid and accurate.

One interesting feature that the MateBook 13 has is called Huawei Share. It lets you connect your compatible Huawei phone to the MateBook 13 and enables easy sharing of files such as work documents, photos, and videos. In this mode, users can also access the Message app on their phone on their MateBook 13 and even use it to quickly reply and send messages. Unfortunately, this only works with compatible Huawei phones and I didn’t have one with me to try it out. You can watch the video below to see how it works.

Write a Review
Compare This | Specifications
Brilliant and sharp display
3:2 aspect ratio
Great specs
Large trackpad
Great performance
Attractive price
Good battery life
Only two USB-C ports
No support for Thunderbolt 3
No Wi-Fi 6 support
Gets hot when gaming
Derivative design
Our articles may contain affiliate links. If you buy through these links, we may earn a small commission.
Sponsored Links