We first saw the Huawei Ascend Mate at CES 2013 five months ago. Back then, Huawei took the crown away from Samsung for having the biggest display ever on a smartphone. Seeing how things are always changing in this highly competitive industry, it was not long before Samsung struck back with its Galaxy Mega 6.3 in April.

Nonetheless, it cannot be denied that phone makers these days are pushing the boundaries of what define, or should we say, differentiate, a smartphone and a tablet. A crucial issue that we will attempt to address in this review is whether devices such as the Huawei Ascend Mate can effectively replace the need for having a separate phone and tablet. More importantly, is the smartphone with a screen size above 6 inches a practical device? Before that, here's a quick look at the specs of the Huawei Ascend Mate:

The Ascend Mate is without a doubt a massive phone. The sheer size means that it is only suitable for consumers who either have very big hands or do not mind carrying it in their pockets or bags. Here's a quick comparison with the Samsung Galaxy Note II, Galaxy Mega 5.8, Galaxy Mega 6.3 and the LG Optimus G Pro to put things into perspective: 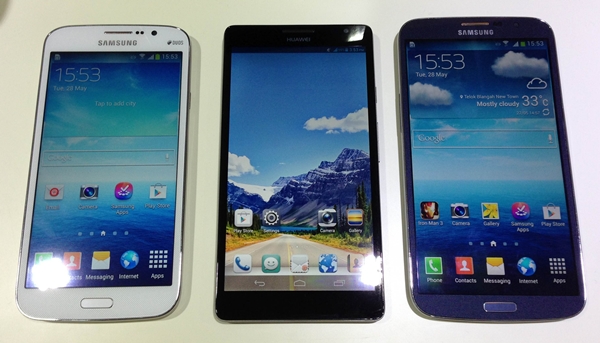 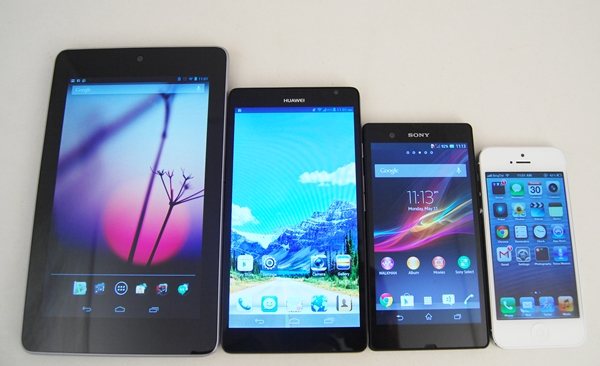 As seen in the table above, the Ascend Mate is longer, wider and heavier than most of its counterparts. This is mainly attributed to the 6.1-inch display and massive 4,050mAh non-removable battery. Having said that, it is no longer viable to operate the phone in one hand as it is near impossible to reach the other side of the screen with our thumb. Huawei has included an option to enable one-handed operations on the Ascend Mate, which we will discuss in detail in our next section. 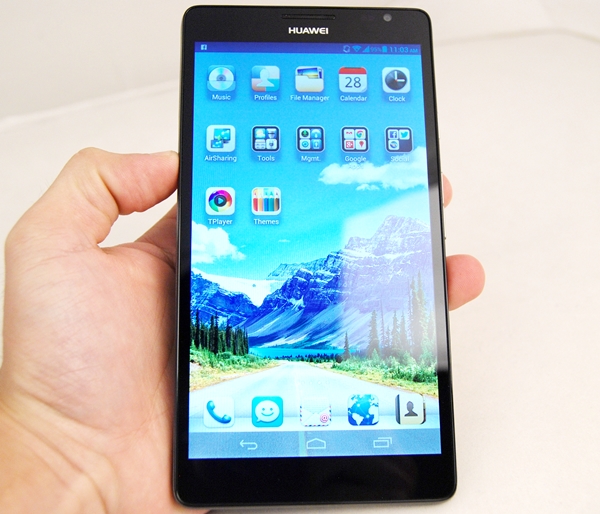 With that dimensions and weighing at 198g, we do not consider the Ascend Mate to be pocketable. While it can fit in our pair of slim fit jeans, there is a conspicuous bulge. For consumers who keep their phones in the pockets when sitting down, we highly advise against that in the case of the Ascend Mate as you will feel uncomfortable.

The Ascend Mate is quite decent in terms of build quality. For a device of its size, the choice of using plastics to keep the weight to a minimum is acceptable. It is also fortunate that Huawei used matte plastic for the back and sides of the Ascend Mate, making it easier to grip. 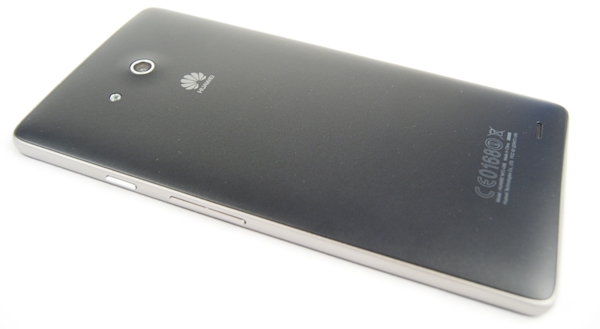 The standard suite of connectivity ports and buttons are scattered on all four sides of the Ascend Mate. Starting from the top, you can find the micro-SIM card slot and 3.5mm audio output jack. On the right side of the device are the power button and volume controls, both of which are sufficiently raised for easy access. At the bottom is the microUSB port which is used for charging and file transfer. Last, but not least is the microSD memory card slot on the left side of the device.

The Ascend Mate runs on Android 4.1.2 Jelly Bean with Huawei's own Emotion user interface (UI), which we had a preview on the Ascend P2 at MWC 2013. The level of customization is similar to HTC and LG, but not as drastic as Samsung. Well, let's take a look at this Emotion UI: 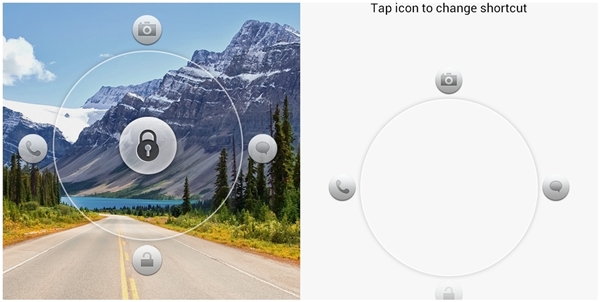 Placing shortcuts on the lock screen is nothing new these days, but there is one slight annoyance in Huawei's implementation. If you notice, the unlock icon is at the bottom. This means that you have to swipe down to unlock the phone. While you can customize the other three shortcuts (left, top and right) to other apps, the unlock icon remains fixed.

The conventional method of unlocking the screen is swiping from left to right, although Samsung Galaxy S III / 4 users can swipe in almost any direction and HTC One users slide up. By adding another combination to the mix, users switching from other Android users may get confused. We often find ourselves swiping left to right to only access Messages. 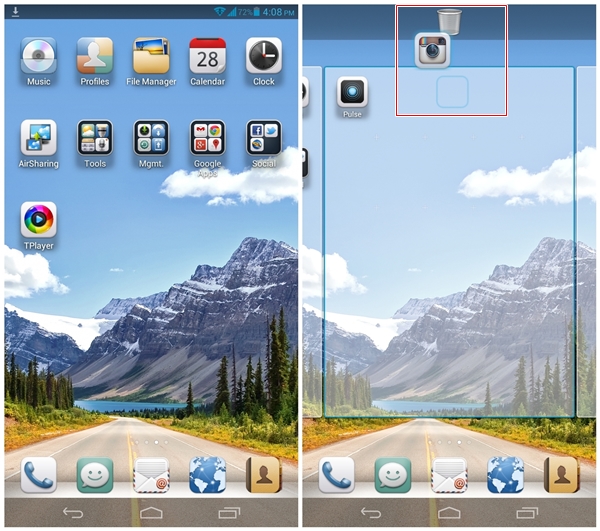 The first thing any Android user will notice is the absence of an app drawer where all the apps in the device are listed. This concept is similar to Apple's iOS, and may be a bugbear for seasoned Android users. Apps that are downloaded will appear on the third home screen. This differs from stock Android or the UIs of other Android devices where downloaded apps will always appear on the main home screen (if there's space, of course). 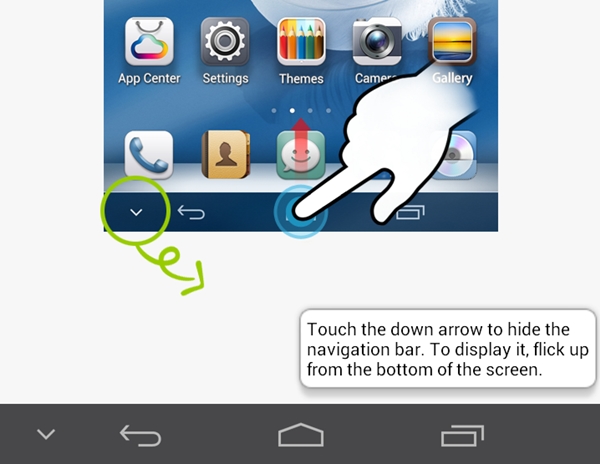 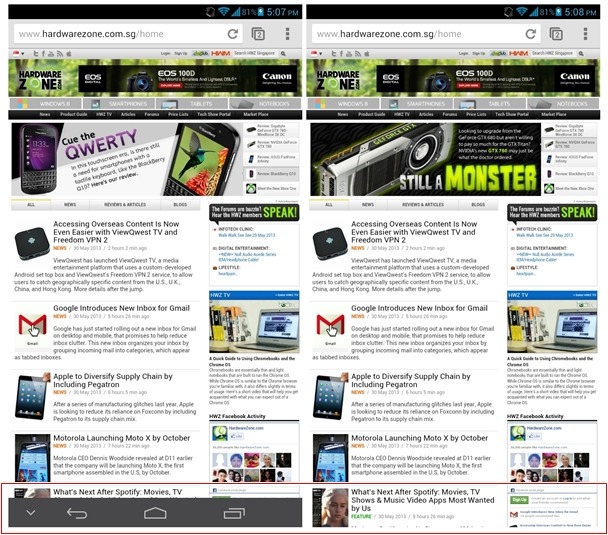 As mentioned earlier in the article, Huawei knows that a 6.1-inch display isn't exactly easy for consumers to navigate using their fingers. Therefore, the company added the option for one-handed operations. This is also nothing new as we've seen a similar implementation on the Samsung Galaxy Note II.

The 'One-hand operations' option basically optimizes the unlock screen, dialer, in-call keypad and keyboard for one-hand usage. You can move the keyboard or dial keypad to the left or right depending on your preference. We find this feature to aid in our usage of the Ascend Mate to a certain extent, but the massive form factor is still too overwhelming. 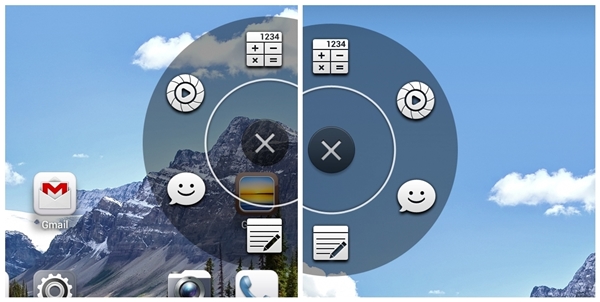 Known as the suspended button, it is a button that you can place anywhere along the sides of the display. Huawei's implementation of the suspended button seems like a cross between Sony's Small Apps and Samsung's Multi-Screen. It contains four shortcuts (Notes, Messages, TPlayer and Calculator).

The functionality is limited to these four apps, of which only the Calculator and Notes app will appear as small windows on the same screen. Tapping on Messages and TPlayer will launch straight into the apps.