The U11's unique feature is Edge Sense, which is a combination of hardware and software that uses eight super-thin pressure sensitive strain gauges in the lower half of the frame (four on each side), to let you squeeze the U11 to register input.

There's haptic feedback vibration when you activate the feature and you can adjust the sensitivity if you prefer a firmer or lighter squeeze. Proximity sensors ensure that Edge Sense only activates when you're actually holding the phone, so a tight fitting pair of jeans squeezing the phone won't do anything. 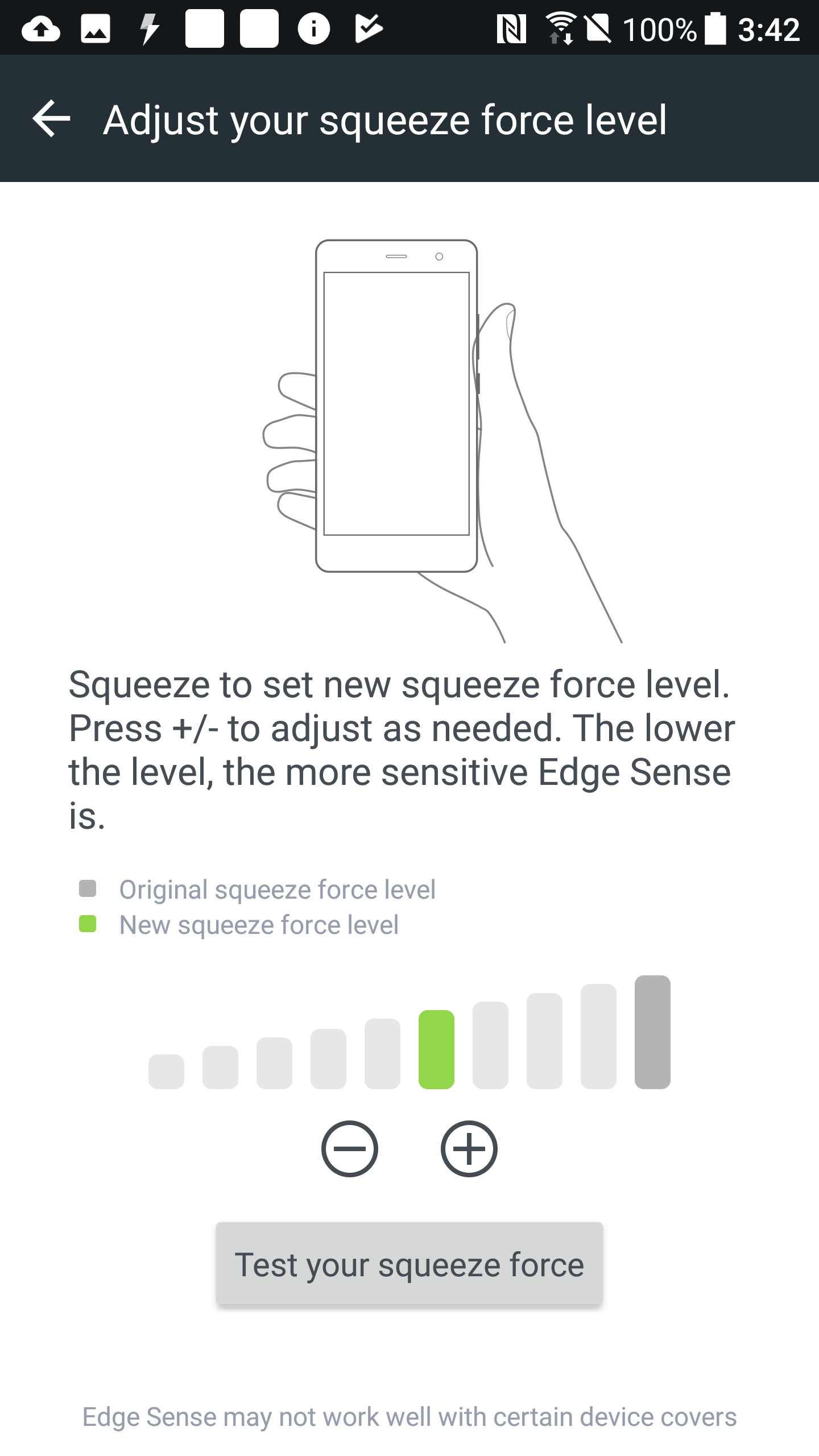 Out of the box, Edge Sense will recognize one input - short squeeze. By default, this is used to quickly launch the front-facing camera when the display is off. When the camera is on, you can also squeeze the edge to take a picture. When users are more familiar with Edge Sense, they can activate Advanced Mode, which adds a second input - long squeeze or "Squeeze and Hold" as it's called in the settings menu. If you're in the camera app, by default, a long squeeze will flip the camera to the rear facing camera, but both short and long squeeze can be customized to launch any app.

Unfortunately, the only app that has built-in Edge Sense functionality is the default camera app, and personally, I preferred using the on screen shutter button or the volume key to take pictures anyway. You can technically squeeze just one side of the phone to take a picture, which HTC has been promoting as being "like a DSLR shutter button" but the problem with this is, the level of force you use to squeeze both sides of the phone in your hand, compared to just one finger pressing down on one side of the phone is completely different. You can't set different levels of squeeze for when you're launching and app and when you're already inside an app, so trying to exert enough force to trigger the shutter almost always causes camera shake.

Having said that, taking pictures with Edge Sense really seems built for selfies, where you would have a firm grip on both sides of the phone and can easily squeeze it, but because I'm not a teenage girl, I take very few of those. 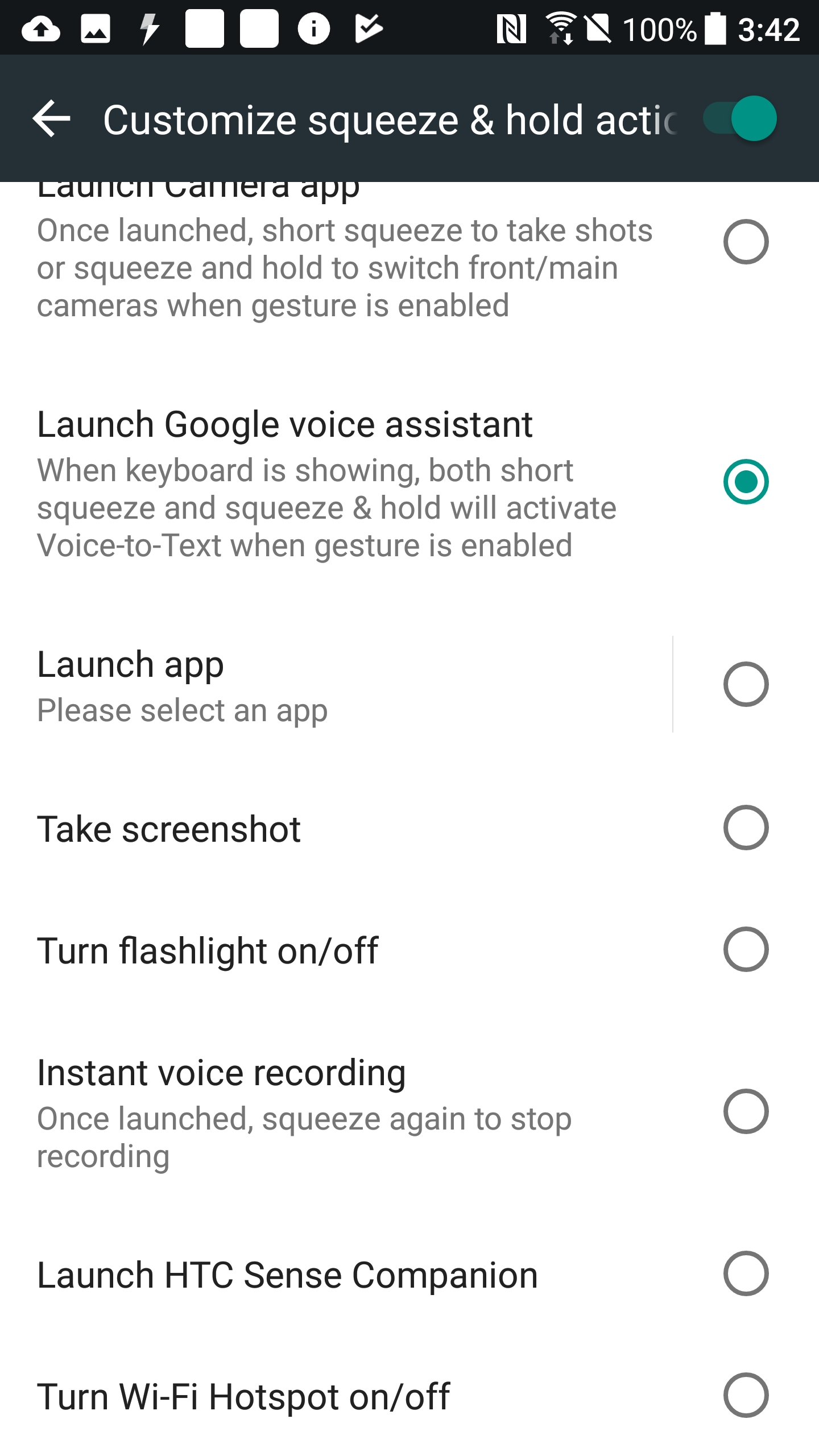 With Edge Sense only working inside the default camera app, the rest of the time, it's basically just a glorified app launcher - that can only launch two apps at a time. Fortunately, HTC will soon be releasing an Edge Sense app that will let you use Edge Sense in any app. Once set up, Edge Sense will let you replicate a single or double tap at a specific position on the screen with short or long squeezes. You'll be able to customize where you want the tap to occur by indicating a position over the app's interface. So for example, you can set up Instagram so that every time you squeeze, Edge Sense will replicate a tap on the screen over the Instagram shutter button to take a picture. Or if you want to use it to zoom in on Google Maps you can set the tap point to somewhere in the middle of the screen. Of course, this is only useful if the app you're using repeatedly uses single or double taps in the same location. I could see it working for one button games like Temple Run, or any camera app with a shutter button, but it's not going to be useful in every app.

According to HTC,  Edge Sense will work with a case, but you may have to squeeze harder to activate it. Soft cases, such as those made from leather or silicon, will work much better than tough hard cases. HTC also supplies a clear plastic case with the U11 that has the sides cut out, so it won't interfere with Edge Sense.

The U11 runs on Android 7.1 Nougat with HTC's Sense UI 8 on top of it. It's a fairly restrained UI, and hasn't changed much since last year's HTC 10. There's not much bloatware, and the few apps HTC has installed are actually quite useful, including BlinkFeed, which offers a curated tile system showing news articles and social media updates it believes to be of interest. The feed is customizable and can be accessed by swiping left from the main homescreen. New to the U11 is Amazon Alexa support, making the U11 the only smartphone currently available with support for both Google Assistant and Amazon Alexa. 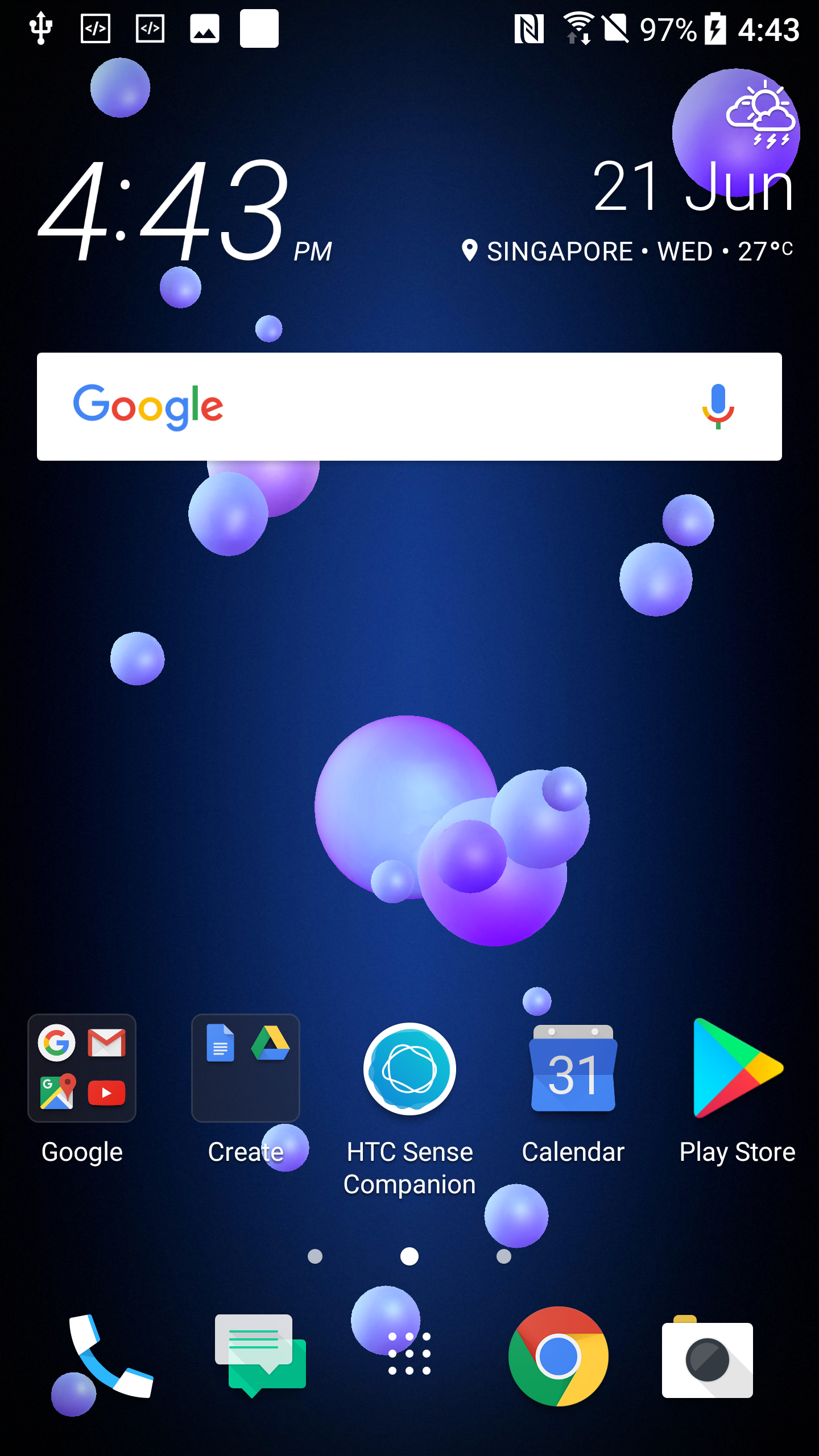 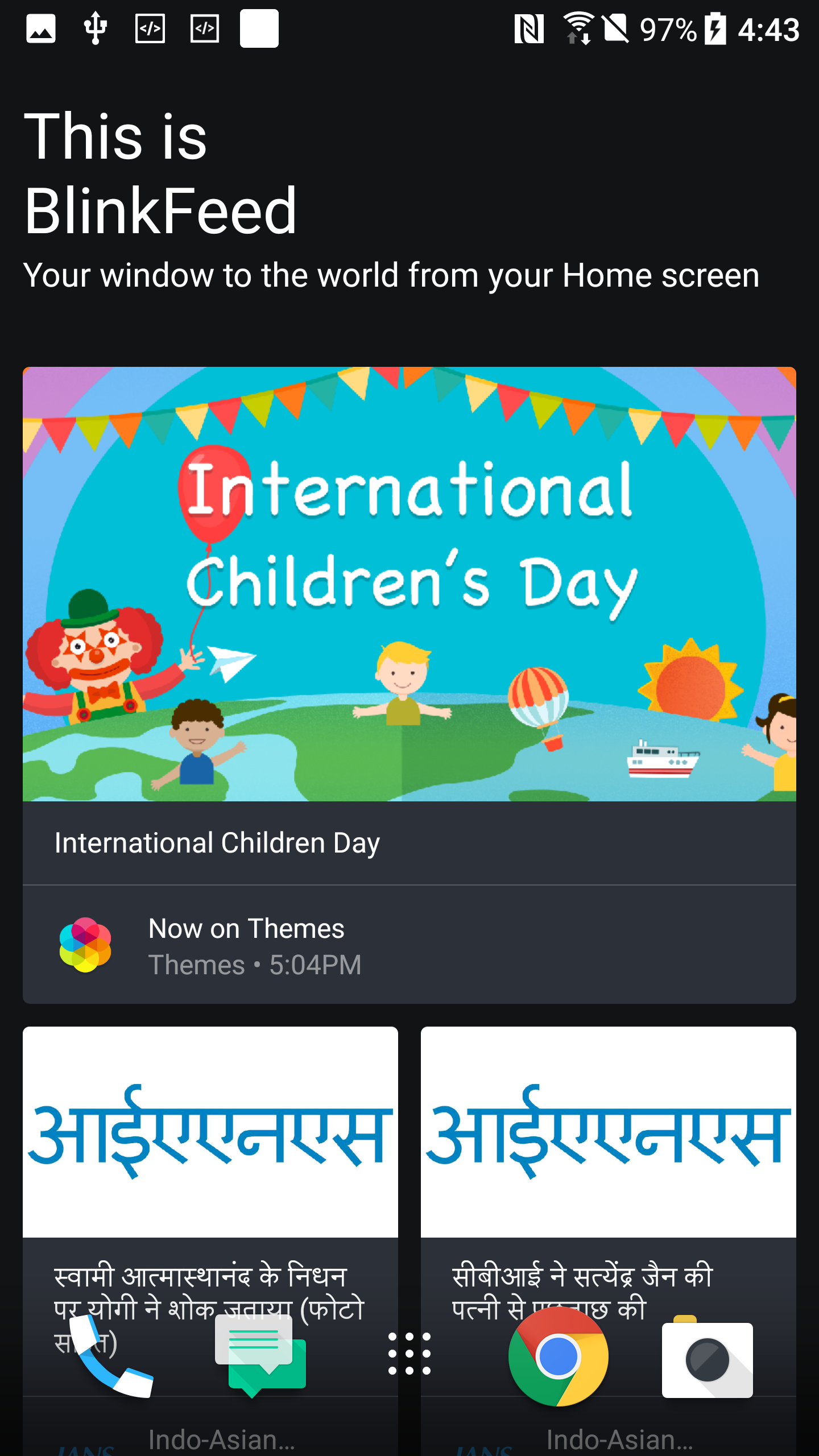 If that's not enough assistants for you, the U11 also features HTC's own Sense Companion. We first saw this on the U Ultra, and it works in much the same way here.

Like most AI assistants, you can voice activate Sense Companion thanks to four always listening microphones on the device. You can use your voice to set alarms and reminders for you, and you can also dismiss or snooze alarms the same way. Unlike other AI assistants, Sense Companion doesn't talk back to you, instead it provides updates and notifications exclusively through an "Edge Bubble", which is essentially just a pop-up in the corner of the screen. Tap on it to read the details, or swipe it away to dismiss it. In most cases, this is fine, but if you're unable to read your smartphone display - for example, when you're driving - you really want your AI assistant to talk to you instead. 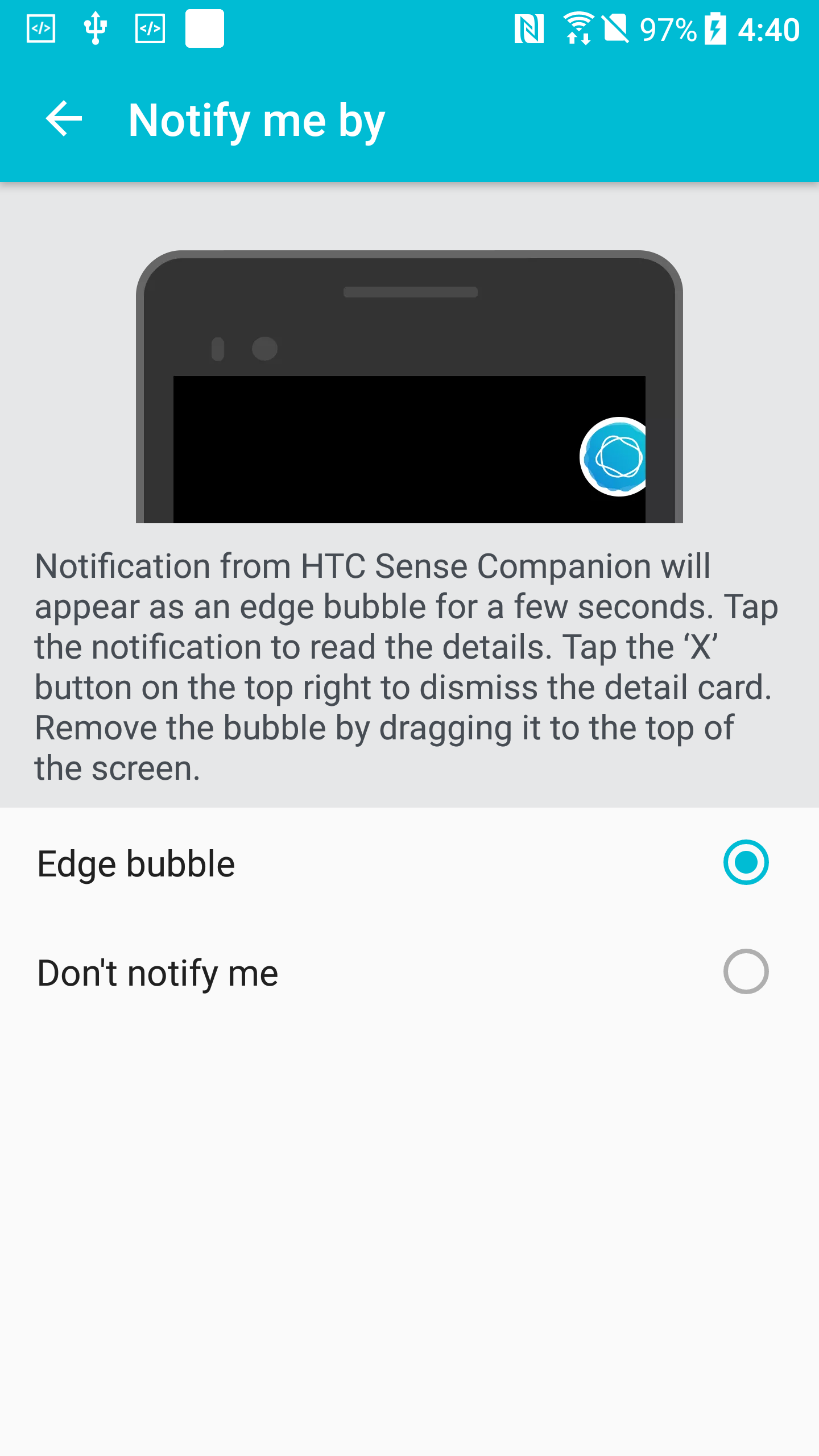 Sense Companion does most of the things other AI assistants like Google Assistant will do, like notifying you about your schedule by reading your calendar, or alerting you that it might rain tomorrow. It also incorporates machine-learning that tracks your activity and behavior and can send you notifications based on that. For example, if it notices that you frequently run out of battery during the evening, it will remind you to charge the device during the day.