The U Ultra has two displays, the main 5.7-inch Quad HD 2,560 x 1,440 pixels resolution (~513ppi) Super LCD5 panel and a secondary 2.05-inch 160 x 1,040 pixels (~513ppi) strip that sits at the top right edge of the phone, next to the camera. The main display is sharp with decent color reproduction, good contrast for an LCD screen and excellent viewing angles. You'll still get better contrast from an AMOLED panel, and the maximum brightness is a little dim, which makes it hard to use under bright sunlight, but it's good enough for most usage cases. 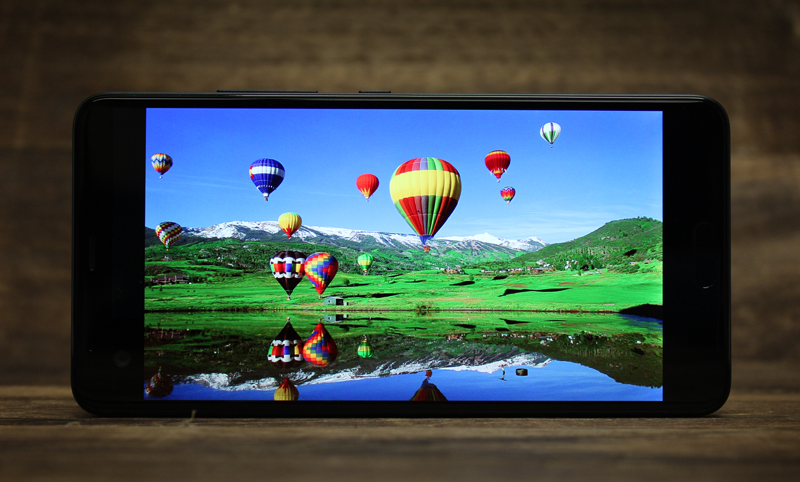 The secondary display is somewhat similar to the one we've already seen on the LG V20 and can be used to display notifications and control music playback, view the weather, change a setting, or quickly jump into a favorite app or contact. You scroll through its list of features by swiping along the screen.

Unfortunately, the U Ultra's secondary display is far inferior to the one on the V20. First of all, it's far too dark, and there's no option to adjust the brightness: 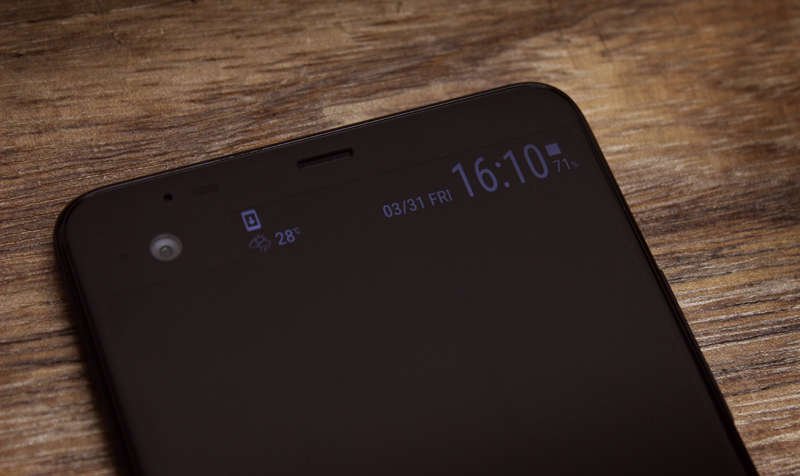 Second of all, unlike the V20, the U Ultra's secondary display isn't used in any apps, and it just displays a blank screen when you've got an app running on the main display. Even something simple, like how the V20 moved the camera controls to the secondary display to remove clutter from the main screen would have been a useful addition.

Thirdly, the secondary display's settings are far more confusing than it needs to be, offering a different set of options depending on whether the main display is unlocked or not. For example, the useful settings and apps launcher, which lets you quickly toggle Wi-Fi on and off, turns the torch on and off, and has a handy quick launch to the camera app, is only available when the display is off - there's no option to show it when the main display is on. This lack of consistency is more frustrating than it's worth. 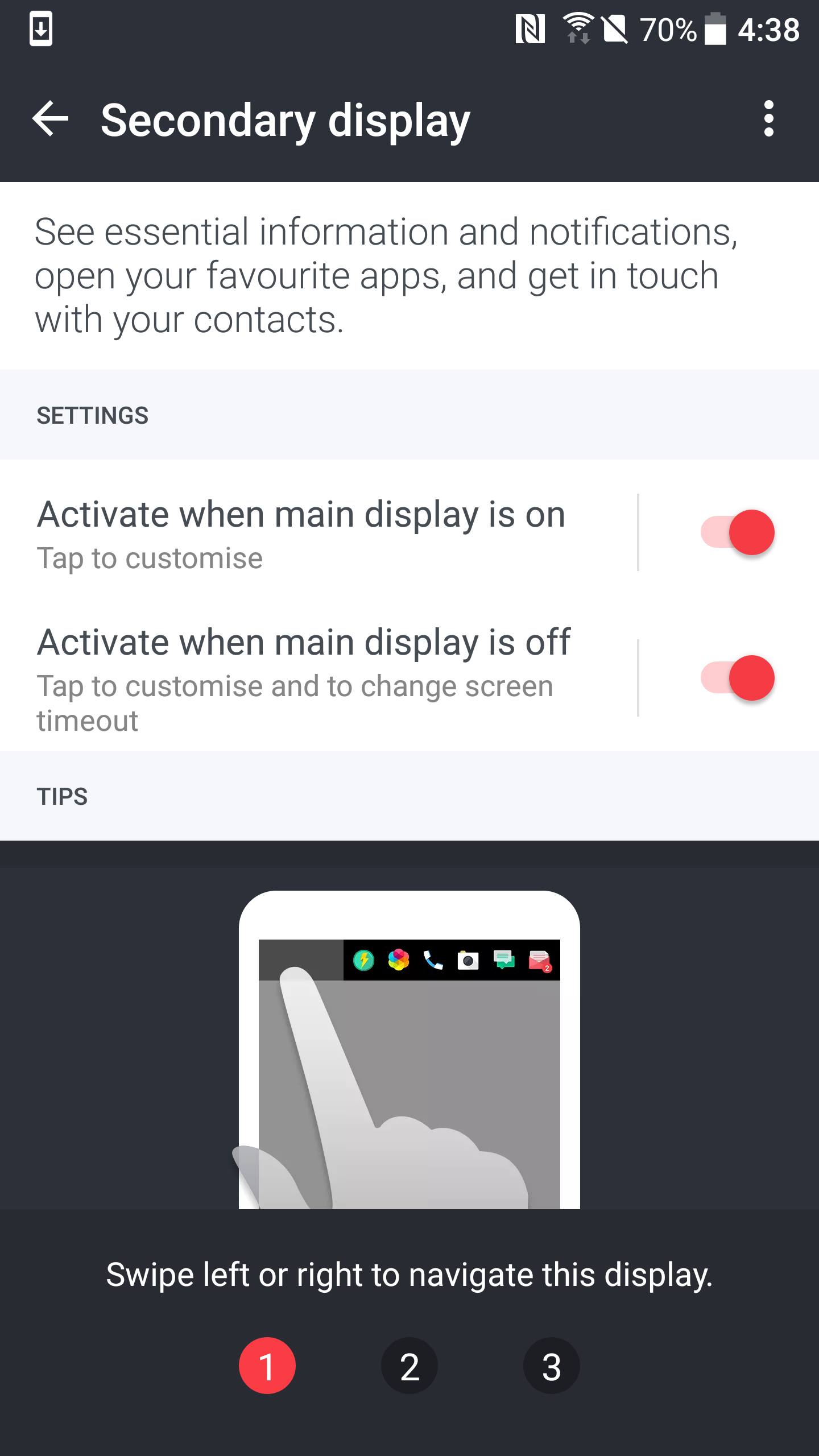 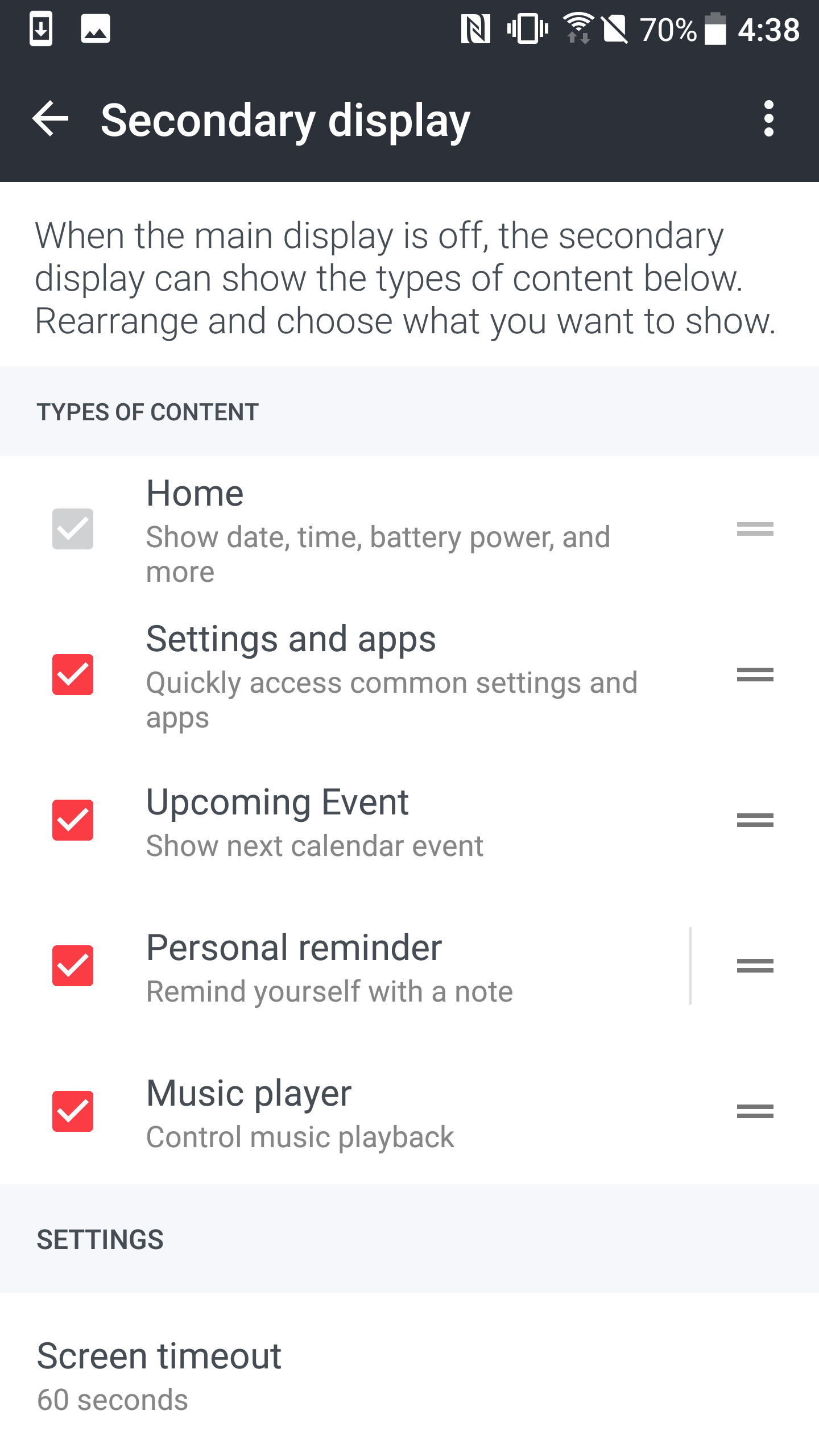 HTC's BoomSound stereo speakers have always been one of the high points of its phones, and while that's still true with the U Ultra, I can't help but miss the days of the HTC One with its two dedicated front-facing speakers. Like the more recent HTC 10, the U Ultra doubles up the earpiece speaker with another speaker located on the phone's bottom edge (similar to what Apple does with the iPhone 7). The sound is still pretty good, with plenty of volume and some surprisingly decent channel separation, but where HTC used to be the undisputed king of smartphone audio, now I can't tell much difference between the U Ultra and my iPhone 7.

As I mentioned above, like the iPhone 7, the U Ultra doesn't have a headphone port. However, unlike the iPhone, the U Ultra doesn't come supplied with a 3.5mm adapter. Instead, you get a pair of HTC's USonic USB Type-C earbuds. These earbuds pair with HTC's pre-installed USonic software to create a personalized audio profile based on the unique shape of your ear canal. It sounds a bit gimmicky and, while the USonic earphones sounded noticeably louder after I set up my personalized audio profile, I didn't notice any difference in audio quality compared to a pair of cheap Bluetooth earphones I had lying around. 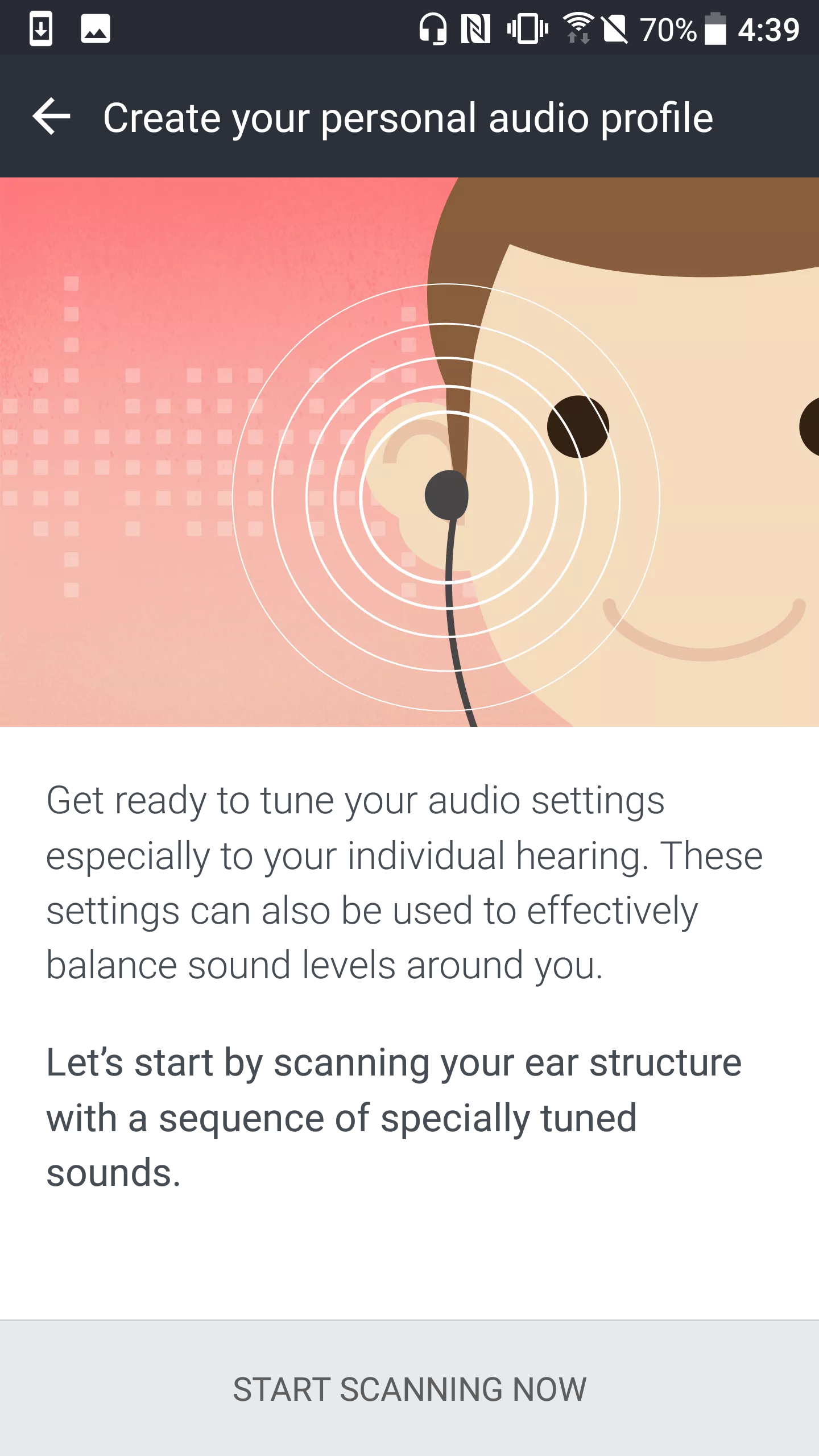 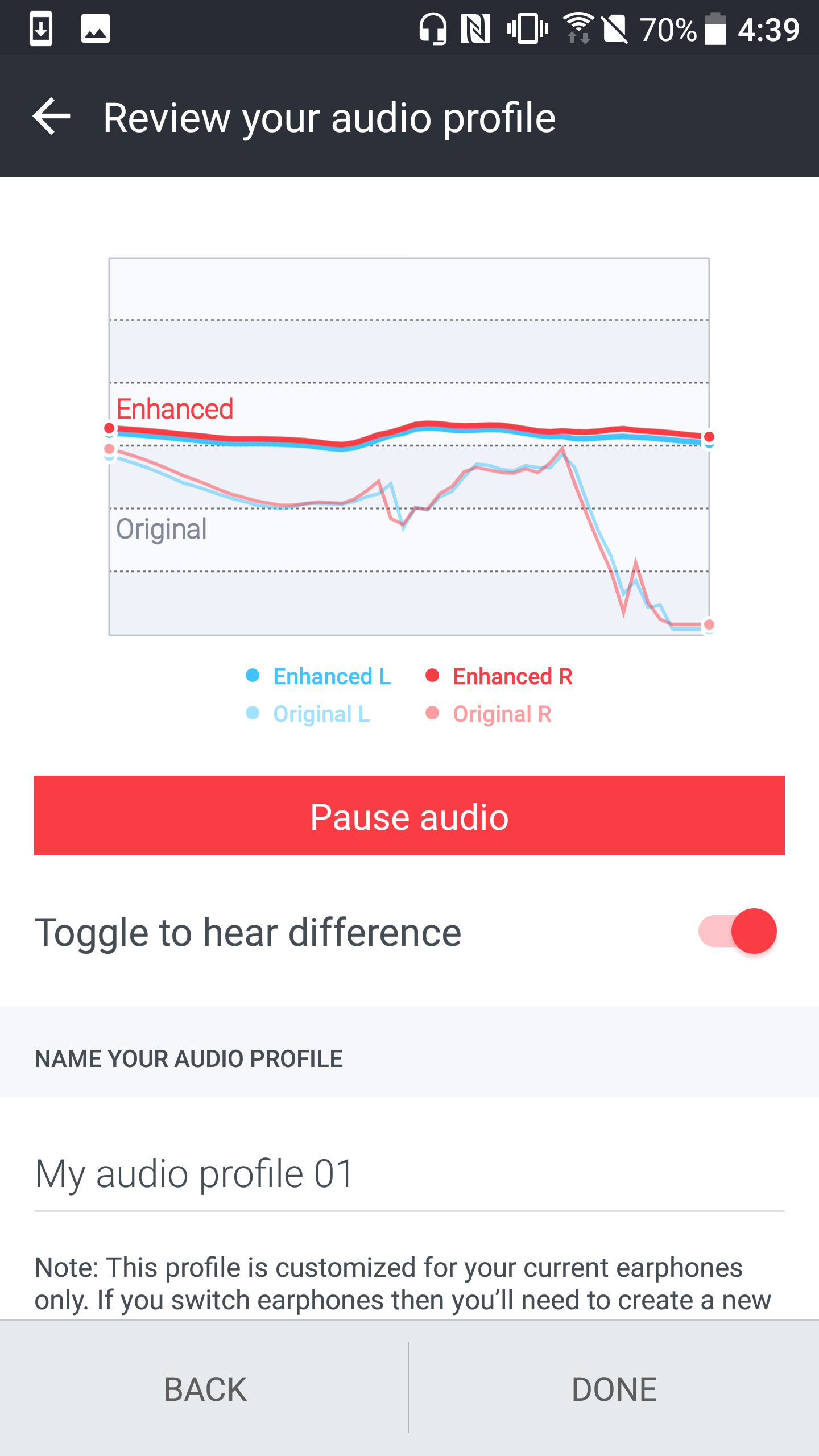 Unfortunately, I wasn't even able to test my regular headphones with the U Ultra because the phone isn't compatible with third-party USB-C to 3.5mm adapters. HTC uses a proprietary audio codec inside the U Ultra, which means the only USB-C to 3.5mm adapter that works with it is HTC's own US$11.99 adapter, which is currently out of stock on HTC's US website and, as far as I can tell, isn't even available locally.

The U Ultra runs on Android 7.0 Nougat and HTC's Sense UI 8. Not much has changed with the UI since the HTC 10, except for the introduction of HTC's new machine-learning AI assistant: Sense Companion. Like most AI assistants, you can voice activate Sense Companion thanks to four always listening microphones on the device. You can use your voice to set alarms and reminders for you, and you can also dismiss or snooze alarms the same way. Unlike other AI assistants, Sense Companion doesn't talk back to you, instead it provides updates and notifications in the secondary display. In most cases, this is fine (although the display is a little small for some notifications), but if you're unable to read your smartphone display - for example, when you're driving - you really want your AI assistant to talk to you instead.

Sense Companion does most of the things other AI assistants like Google Assistant will do, like notifying you about your schedule by reading your calendar, or alerting you that it might rain tomorrow. It also incorporates machine-learning that tracks your activity and behavior and can send you notifications based on that. For example, if it notices that you frequently run out of battery during the evening, it will remind you to charge the device during the day. Unfortunately, after using the U Ultra for the past few days, I still get this message on the main Sense Companion screen, so I can't comment on how effective its learning algorithms are: 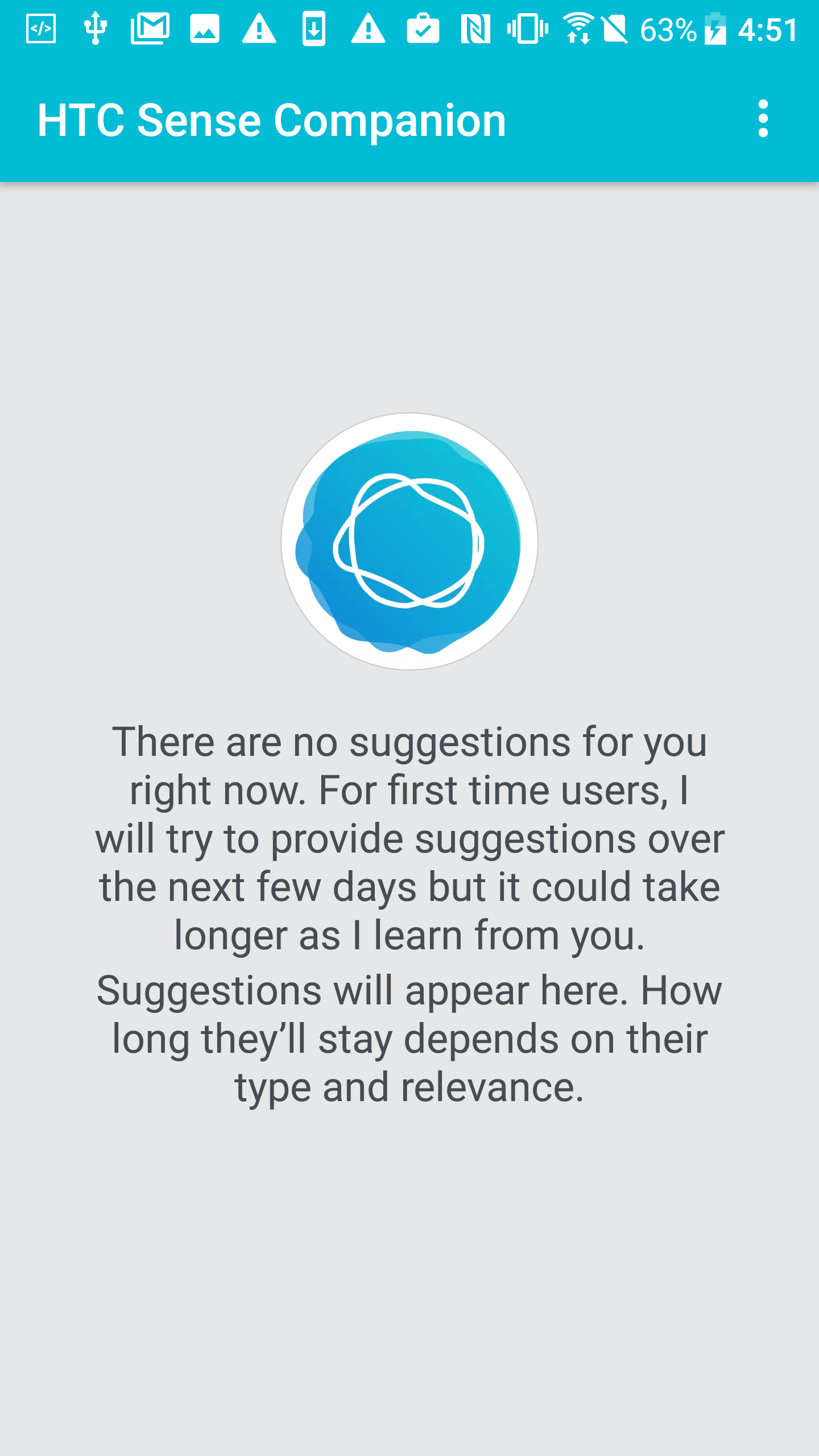 It's worth noting that the U Ultra can also run Google's own Google Assistant if you're not too keen on Sense Companion.