HTC One - There Can be Only One (Updated!)

*Updated as of 25th March 2013 - Originally published on the 16th March, we've spent much more time with the phone to bring you a full analysis after our dedicated camera performance article to upgrade this review with updated findings and a rating. For those who've read our article previously, you can jump direct to our Performance and Conclusion pages to view the updates.

Top of the Tops

It is no secret that Samsung currently dominates the Android smartphone market segment and it's position is made even more prominent from today morning's Galaxy S4 launch. Similarly, the popularity of Apple’s iPhone among the masses is something that cannot be discarded. This situation has essentially pinned the rest of the smartphone makers in a corner as they compete aggressively to try and get consumers' attention from the dominating brands. Times are tough that several smartphone brands are restructuring and even exiting certain markets. HTC, the first vendor that helped bring about Android based phones in its early days, is also facing similar issues. Fortunately, they've been on a roll lately releasing a number of desirable products such as the HTC One X series. More recently, following the reasonably successful Butterfly, HTC wants to continue on the upward trajectory with the introduction of a new flagship model.

Announced on the 19th of February 2013 in London, the HTC One is an amalgamation of various cutting-edge smartphone advancements and features of today. From a certain point of view, the specifications list for the HTC Ones reads like the dream component team one would assemble into their version of the coolest smartphone. 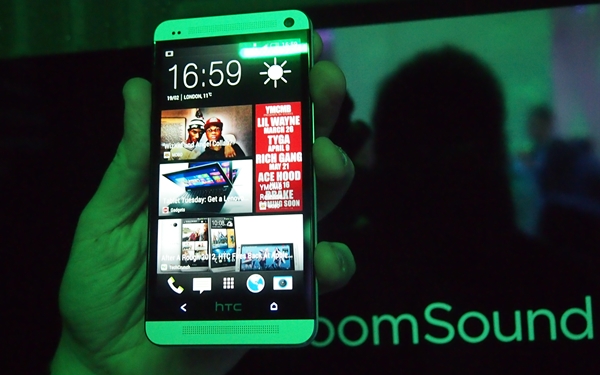 But the specification war, especially for Android based products, is one that has been raging for quite a while. In order to further give the new One an edge over the competition, HTC has fitted their new contender with a long list of features intended to strengthen imaging, audio and usability for their product. However, the question remains, is the HTC One armed with enough tools to conquer on the field of battle? That's what we intend to find out in our assessment. Let's start off with the key features and specifications that HTC One boasts:-

From the looks of it, HTC seems to have taken a hint of sentiments from consumers and improved upon its shortcomings from previous designs. The iterative design of the older series of products, such as One X, One XL and One X+ definitely took away from the prestige a user would feel from owning of the devices. Further to that, excessive use of plastic in these top-tier phones doesn't really bode well for its image. Fortunately, both of these concerns are taken care of on the new HTC One. Just one glance at the device is enough to impress and it doesn't take long to figure out where HTC has been getting their inspiration from.

The use of anodized aluminium makes the HTC One look like a chip off a Macbook Air. The brushed, smooth texture of the back of the device compliments the 4.7-inch edge to edge Gorilla Glass on the front face, giving the whole product an aura of modern, polished sleekness. HTC must also be complimented on their eye for making the functional design aspects of the HTC One also complement the aesthetics. The grills for the stereo speakers (more on those later) 'cap' the mirror finish of the phone's glass front and compliment it well. Similarly the plastic lines at the back of the device, intended to help the wireless signals transmit, do not detract from the aluminium body but instead add to it. In fact we think when the HTC One lies face down, flat on a surface it somewhat resembles EVE from the animated movie Wall-E. (Little known fact, Apple’s Jonathan Ive who was behind the design of the iPod, also had a hand in designing the futuristic robot for Pixar.)

A closer look further revealed the attention to detail that HTC has paid to designing their new flagship model. The HTC One is crafted out of a single block of anodized aluminium, which goes through a strenuous 200-minute, intricate cutting procedure at the hands of a CNC machine. Seeing that the screen panel is a discrete component, the channels between the body and the display are injected with polycarbonate during assembly. The aluminium edges are then chamfered and polished for a spectacular finish. Do note however that the shiny edges look like they have a propensity to get nicked or notched easily, but we've not subjected the phone to such tortures yet.

HTC has given the unibody industrial design the moniker zero-gap construction and we must say that it pays dividends. After a slew of mostly-plastic build smartphones that were launched recently, the HTC One has a refreshingly solid build and an aura of premium permanence. The entire body is fused together and there are no moving or removable parts. This is even evidenced at the sides where the volume rocker is found. The downside of this design choice from HTC is the fact that no components can be removed and replaced in the future - in short, poor serviceability.

Further enhancing the textures of the materials used in construction are the gentle contours of the HTC One. Like the HTC Butterfly, the HTC One has also been built like a pyramid. The display panel, which is the largest component, can be considered the base layer. On top of the screen is the next largest component which is the 2300mAh battery and so on so forth. This makes it possible for HTC to give the One a curved back which not only emphasizes the beauty of the product, but also helps in the ergonomics of gripping the device.

As mentioned earlier the unibody, zero-gap construction of the HTC Ones means that it cannot be taken apart. Due to this, you will find the micro-SIM slot located on the top left hand side and HTC has found no space to include a slot for micro-SD cards. On the right hand side, you will the volume control button, buy apart from that, this side of the profile is rather clean. The 3.5mm port and the micro-USB MHL port, along with the power button are found at the top of the device. As an added bonus, the power button comes with an IR blaster which allows you to use the phone as a remote control for your TV.

There is just a single qualm we have with the otherwise near perfect design of the HTC One. Right where the home button should be, resides a HTC logo. Putting aside our disdain for branding, the HTC logo is actually quite unobtrusive and could almost be deemed to have been tastefully implemented. Our main problem is the fact that the logo does not serve as a touch button. Pressing it results in no action. Instead, the back button can be found on its left and the home button is found on its right. This design choice will take time to get accustomed to. 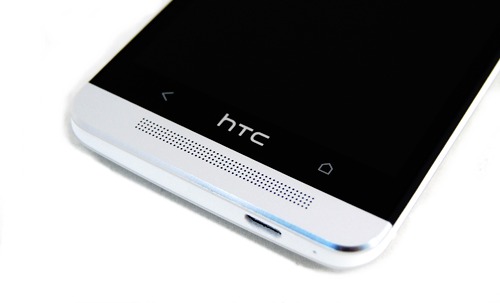 The HTC One weighs 143g, which sounds like it is on the higher side. But considering that the HTC One X, with its polycarbonate body weighed 130g, it is surprising that HTC has only managed to add another measly 13g to the overall weight even with the use of aluminum. The weight, coupled with the contoured back made possible due to the pyramid design of the internal components, makes the HTC One rest solidly when held in hand. Although on a personal note, it did take this reviewer some time to get used to the HTC One’s weight distribution profile (all the weight is centered in the middle) as opposed to the usual approximately even weight distribution profile of most other smartphones. If you do not support its center of gravity, it does feel like the HTC One will topple right out of your hands. The placement of the power button at the top as opposed to the side where the thumb can easily access it is also an initial handling hassle. But as you get used to the phone, this particular design choice bothers you less and less.

As mentioned earlier, the major usability gripe we had against the HTC One was the HTC logo used at a spot that has been effectively standardized as the location for the home button across the majority of phones and manufacturers. If the HTC logo functioned as the home button, our complaint would be restricted to the aesthetics of the choice. As we pointed out above in the design section of the HTC One, pressing the logo does not deliver any input to the phone. Shoving the home button to the right hand side goes against what is intuitive and ingrained in most users, which is never a good thing. Even after repetitive use of the device over the week, we still found ourselves tapping the HTC logo subconsciously expecting it to take us back to the home screen. As such, we found this design choice unacceptable.