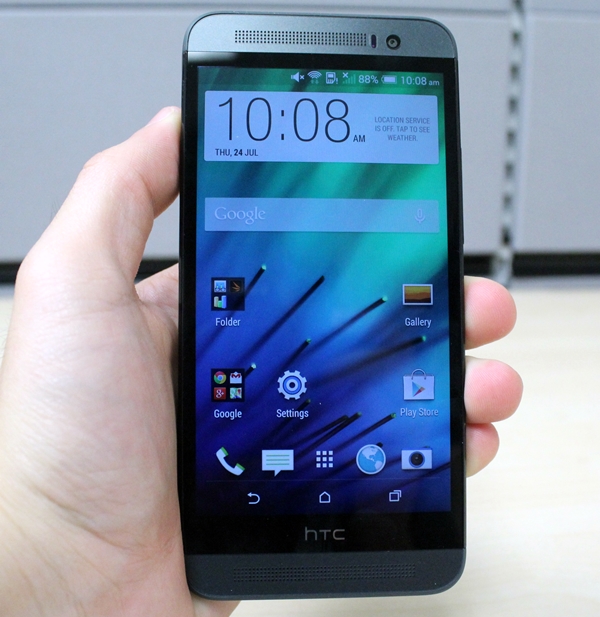 Before the introduction of the One (2013) and One (M8) in 2014, HTC established itself in the smartphone industry as one of the few brands that is capable of churning out well-built plastic devices.The Taiwan-based company had been experimenting with plastic (or more accurately known as polycarbonate) and metallic materials since 2010, starting with the first Desire phone to the mash up of plastic with aluminum on the Desire HD, Desire S, Sensation and back to polycarbonate on the One X in 2012.

Two years on, it seemed that HTC had an obsession with building its flagship smartphones with top grade materials like anodized aluminum, which inevitably command high, premium price tags. In an era where the smartphone industry is on the verge of a cut throat price war, is this strategy still feasible for any phone maker who wants to remain relevant? HTC understands this and believes in offering consumers a choice. That's where the One (E8) comes into the picture; distilling the core of the One (M8) into a more affordable package. So how alike and different is the One (E8) from the One (M8)? Which phone would suit your needs better? Before we begin to share our findings, here's a quick overview of the specs between the two phones:

The biggest difference between the One (E8) and One (M8) is the choice of materials used for the chassis. Unlike the cold, hard metallic feel of the One (M8), you will be treated to a soft-touch, matte texture on the One (E8). It's a feel that is almost forgotten on a HTC device; the last HTC device that gave a similar feel was the HTC One X+, which had a slight matte texture on its rear. 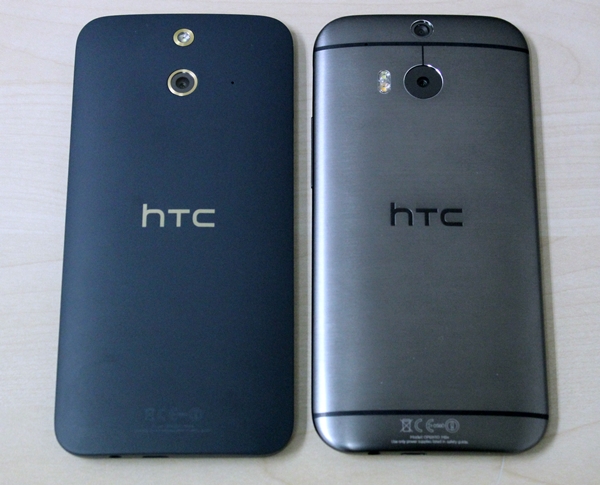 It is noteworthy to mention that only the misty gray model sports a matte texture on its rear. The other two colors - polar white and electric crimson - have glossy textures on the rear which have a natural tendency to attract fingerprints and smudges. Therefore, consumers who prefer a better grip of the device or/and dislike fingerprints and smudges are probably better off with the misty gray model. 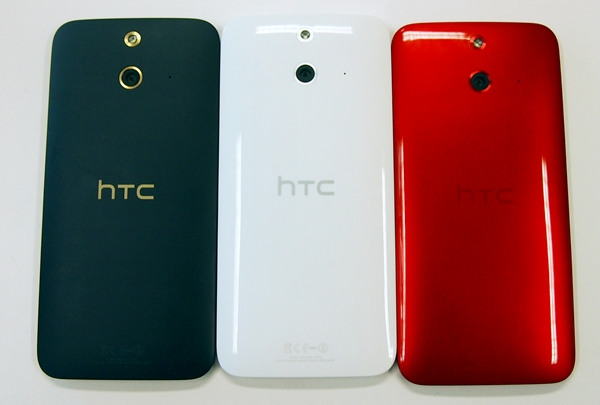 The misty gray model has another key aesthetic feature that should set some hearts fluttering. The rear camera and its accompanying LED flash have golden rims around them, which stand out from the gray surface. The power button at the middle of the top side is also dressed in gold. Since taste is highly subjective, some consumers may view the gold finishing as a little too much 'bling', but we find it appropriate. 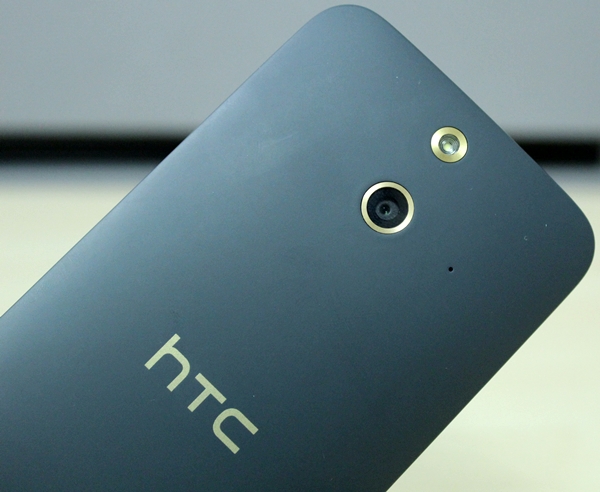 Between the gray One (E8) and the aluminum based One (M8), it's hard to conclude who offers a better feel and handling; both materials and texture have their fair share of pros and cons. Regardless which side you are on, this only proves that HTC has the special knack for working with both plastic and metal. 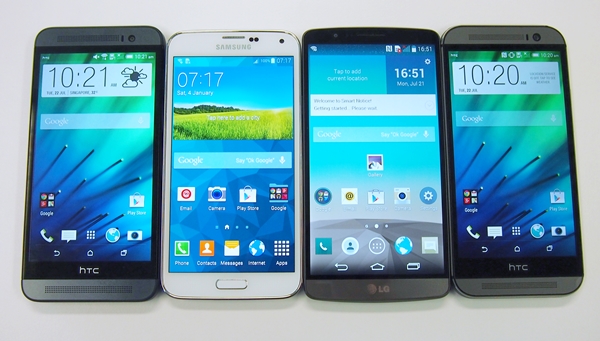 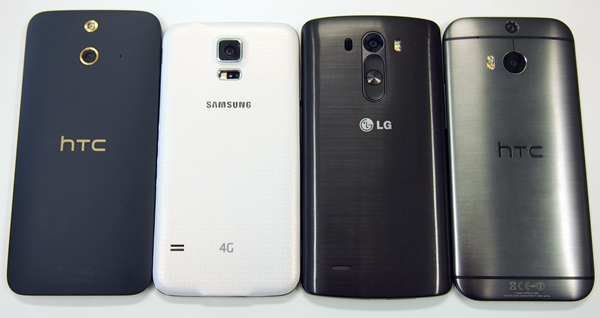 Something else you might have noticed from the photos above is the difference in camera hardware. The One (E8) forgoes the Duo Camera feature and uses a standard camera module instead of the UltraPixel variant. So you won't get the snazzy depth effects and its related camera effects, but that helps reduce cost and still maintain most of the key aspects that the One (E8) retains from the One (M8). We'll share more on the camera capabilities and differences later in the review.

For other attributes like OS, UI aspects, you can refer to our past articles on the HTC One (M8) here and here.

The One (E8) is powered by a Qualcomm Snapdragon 801 quad-core 2.5GHz processor and 2GB RAM, which is similar to the One (M8). As such, the One (E8) is still part of the premium class of devices as far as overall hardware specs and positioning is concerned. How do the two phones fare against the current competition? For one, we expect some aspects of benchmarking to yield the same outcome as its predecessor. Let's take a look at the benchmarks right after this comparison table: -

For an in-depth understanding of 3DMark for Android, do head over to our article, "3DMark - Android Device GPU Performance Review." In a nutshell, it is an OpenGL ES 2.0 benchmark test that uses fixed off-screen rendering to run two graphics tests designed to stress the GPU performance of your device and a physics test to stress its CPU performance. The benchmark consists of three test portfolios:- Standard (720p resolution rendering), Extreme (1080p resolution rendering with higher quality textures and post-processing effects) and Unlimited (disabled v-sync, display scaling and other OS factors that make it ideal for chipset comparison. As you can see from the six benchmarks above, the One (E8) and One (M8) have very comparable performance scores. Although they run on different software/build numbers and kernel/baseband versions (could be due to the lack of Duo Camera and its apps), they are basically the same when it comes to benchmark comparisons. The same could be said about the actual usage experience; the One (E8) did not feel in any way slower than the One (M8) or any of its competitors.

In fact, only the portability ratio had a positive impact on the One (E8) because it's lighter than the aluminum One (M8). 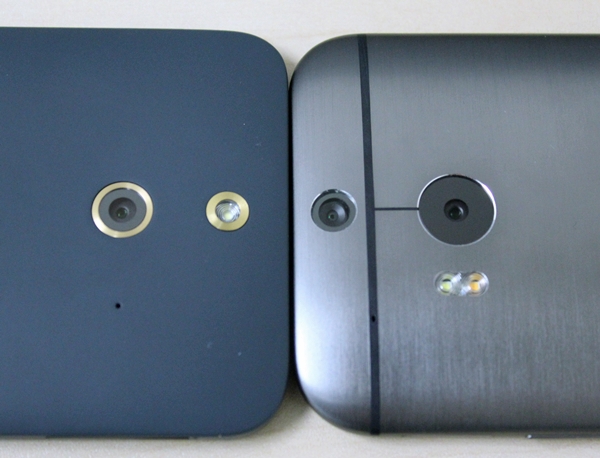 Is the switch to a 13-megapixel camera on the One (E8) a wise decision? Does the One (E8) take better photos than the One (M8)? To answer that, we compare the photos taken by the One (M8) and One (E8) in both normal and low-light conditions: 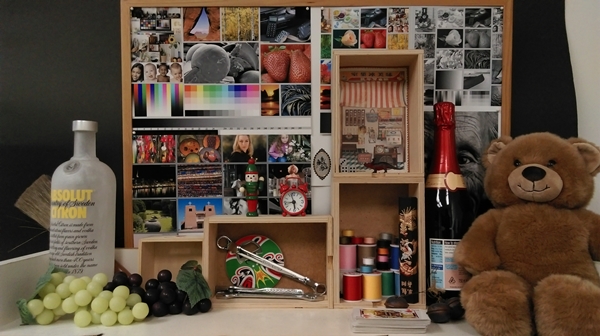 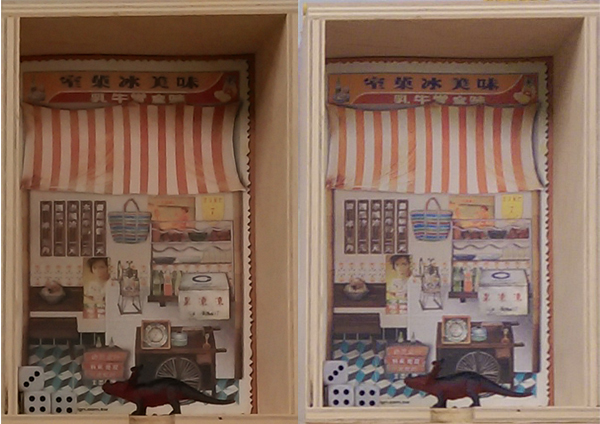 As you can see from the photos above, the One (E8)'s imaging performance is a mixed bag. It generally takes good photos in normal lighting conditions, but faltered badly in low light. For the One (M8), it is the reverse.

If you think the One (E8) is a scaled down variant of the One (M8) flagship, you are setting yourself up for a huge surprise. In fact, the One (E8) matches the One (M8) in almost all aspects even though its chassis is made of polycarbonate and sports a different camera module. As such, which is the better choice really depends on your personal preferences and needs.

While its plastic build can't hold a candle to the premium, aluminum chassis of the One (M8), the One (E8) is lighter and feels as good, or even better in the hands. Its 13-megapixel rear camera sensor may not be anything to shout about, but it generally takes better photos than the UltraPixel counterpart in most scenarios except under low light conditions.

Priced at S$658, the One (E8) is targeted at consumers who want today's flagship specs in a more affordable package. No longer do you need to sacrifice on performance and features just to fit your budget. However, the One (E8) faces stiff competition from the S$599 Oppo Find 7A. You not only save S$59, you also get comparable performance in most aspects, better imaging capabilities/quality, and a much faster charging experience though you have to take note of its slightly bigger footprint.

Write a Review
Compare This | Specifications
Great design and handling
MicroSD memory card slot
Good performance, comparable with One (M8)
Lighter than the One (M8)
Glossy rear for white and red models
Does not feel as premium
Imaging quality not quite on par with premium phones, but it's better than the One (M8)
Our articles may contain affiliate links. If you buy through these links, we may earn a small commission.
Sponsored Links