A Value Smartphone with Desirable Features

HTC is going through a tough journey this year as it tries to compete with Apple, LG and Samsung in the high-end market space. Meanwhile, HTC is busy building up variety in the mid-range and entry level segments which seem to be equally lucrative. 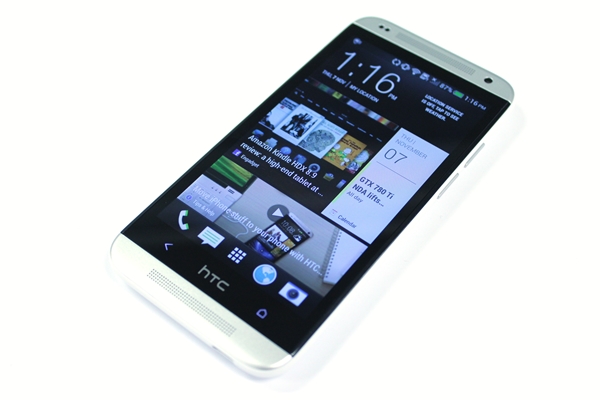 Its latest strategy is the introduction of the Desire 601, which HTC pegs as "a powerful value smartphone for everyone". Is it really the most advanced mid-range smartphone in the market today? We find out for you, but before we dive into the review proper, here's a quick look at the specifications comparison between the HTC Desire 601 and One Mini since both models appear to be targeted at the same audience:-

As a Desire-branded model, the design and build quality of the Desire 601 cannot be compared to the premium One series, which also includes the "mid-range" One Mini. In fact, the looks of the Desire 601 looks like a hybrid between the One series and One X+.

It sports the favorable dual font-facing stereo speakers (also known as HTC BoomSound) and the same annoying two-button layout as the One series. When you flip the device over to its back, you realize the Desire 601 has a striking resemblance to the One X+ from the location of the rear-facing camera, the LED flash and brand logo. In case you are wondering about the missing Beats Audio branding on the Desire 601, Beats Electronics reacquired the 25% minority stake held by HTC last month.

The back has a very soft, matte texture that is in contrast with cold feel of the aluminium clad One series. In comparison with some of the plasticky phones we've handled, the Desire 601 feels good and is comfortable in our hands. As with most devices that come in white, there are concerns of the rear cover picking up dirt and stains easily.

As a mid-range device, the Desire 601 has one of the larger displays at 4.5 inches with a resolution of 960 x 540 pixels. This works out to be a pixel density of 245ppi, which is considered decent for viewing images. Text however, does look a tad pixelated as it has a less than HD-ready resolution for its sizeable screen. For reference's sake, here are the display sizes and resolutions of other smartphones in its class:

If not for the compact form factor and 4.5-inch display, we would have criticized HTC's decision to locate the power button on the top left corner of the device. Having said that, the power button is easily accessible and so are the volume controls on the right side of the Desire 601. One-handed operation is no issue for this compact device and is light on your pocket as well.

The Desire 601 runs on Android 4.2.2 Jelly Bean and Sense 5, which is currently two generations behind the latest Android 4.4 Kit Kat. There is no word on whether HTC is bringing the Android 4.4 update to the Desire 601, although we are not pinning any high hopes on it. We've already gone into great lengths about Sense 5 in our reviews of the One and Butterfly S, but here's a quick re-cap of the main features:

Despite its position as a mid-range device, the Desire 601 comes with powerful imaging hardware that includes a 5-megapixel rear autofocus camera with BSI sensor, pixel size of 1.4µm (which is on-par with the Apple iPhone 5), a sensor size of 1/4-inch, F2.0 aperture and 28mm wide angle lens.

It also has Smart Flash, which has five levels of flash automatically set by distance to subject, and is capable of recording 1080p videos. In the aspect of software, the Desire 601 supports HTC Zoe with Sequence Shot and Object Removal. You can find out more about HTC Zoe here. 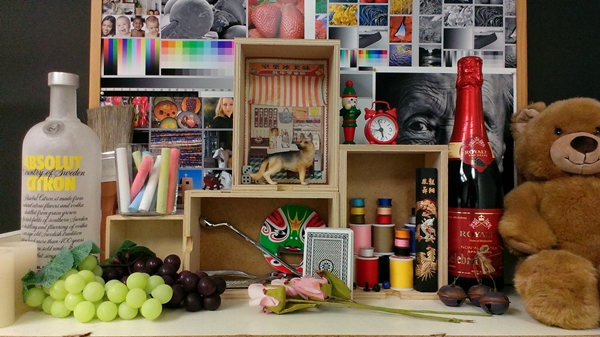 The Desire 601 is powered by a Qualcomm Snapdragon 400 dual-core 1.4GHz processor and 1GB RAM, which is similar to the HTC One Mini. We will be pitting the Desire 601 against other rivals of its class such as the Samsung Galaxy S4 mini, LG Optimus F5 and Sony Xperia SP in a series of benchmarks.

The Desire 601 had a decent score of 5,925 in the Quadrant benchmark, which puts it in the middle of the competition along with the HTC One Mini. Its average performance could be due to the competition's higher clocked processors and perhaps better hardware and software optimizations. 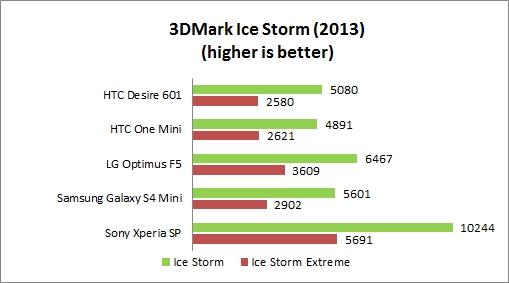 Like the One Mini, the Desire 601 didn't fare too well against the competition. If you are wondering why the Xperia SP topped the 3DMark charts, it is due to the type of GPU used by the Snapdragon S4 Pro pocessor in the Xperia SP. The Xperia SP uses the more advanced Adreno 320 GPU while the Desire 601 and Galaxy S4 Mini use the older Adreno 305 GPU.

SunSpider Javascript measures the browsing performance of a device. It not only takes into consideration the underlying hardware performance, but also assesses how optimized a particular platform is at delivering a high-speed web browsing experience. With a result of 1763.1, the Desire 601 ranked last in the SunSpider benchmark.

Apart from our benchmark based tests, during our day to day usage, we found the user experience on the Desire 601 to be generally smooth. Overall, we had no complaints of the phone's performance even though benchmarks peg it at the lower end of the scale.

In our looping video playback test, the Desire 601 lasted 6 hours and 14 minutes which is pretty good considering that it could outlast the Optimus F5 and Xperia SP even though they have bigger battery capacities. Not surprisingly, it had a slightly better battery life than the HTC One Mini as the latter had a smaller battery pack.

Looking at the Power Consumption chart, the LG and Sony handsets have higher power draw which contributed to the less than expected battery up-time compared to the Desire 601. The Galaxy S4 mini had a low power consumption thanks to its power-efficient AMOLED display which consequently led to its class-leading battery up-time in our media-consumption test scenario. Compared to the HTC One Mini, the Desire 601 had a slightly higher power draw and it's likely due to the larger 4.5-inch screen.

In the Portability Index where each device is assessed on its ability to balance battery mileage against its size and mass, the HTC Desire 601 loses out slightly to the HTC One Mini as the latter phone is slimmer, more compact and is lighter. Interestingly, the Desire 601 and Optimus F5 tied in this comparison even though the Desire 601 had a much better battery life. This goes to show the Optimus F5 has a more favorable form factor and weight to vie for the same spot.

Positioning the Desire 601 as the most advanced mid-range smartphone in the market is a long shot, but HTC does have a credible offering here (at least on paper).

The Desire 601 ticks some of the right boxes on our checklist such as good handling, decent build quality, competent processor, above average imaging performance, microSD card support, removable battery and an affordable price tag. It's however not the only device that offers these traits and some of its competitors also boast these features. For example, the LG Optimus F5 is a very serious competitor since it has the same launch price. It offers some neat software features found in its higher end models and its overall performance is comparable to the Desire 601.

Perhaps the most preferred improvement HTC could have made to the Desire 601 is to equip it with a 720p display since Sony has proven that it is able to outfit one in the Xperia SP at similar price points. However, that would mean eating into one of the differentiating points of the HTC One Mini.

More importantly, the Desire 601 arrived in the market a little late when competing phones are already in the market for a few months. The champion of our 4G LTE smartphones below S$600 shootout, the Samsung Galaxy S4 Mini, has been in the market for four months and its street price is more palatable. Its all-rounded performance might be worth considering to fork out the extra bucks over the HTC Desire 601. But if you prefer a more premium looking device, look no further than the HTC One Mini.

Now, if you are in a dilemma choosing between the One Mini and Desire 601, it boils down to the price and features. As a One-branded device, the One Mini carries a more expensive price tag (S$688), a better screen and a more solid chassis. However, if price is a concern, a microSD card slot is a must and you prefer a removable battery, we would say the Desire 601 is the obvious option.

For options beyond the Android camp, the Nokia Lumia 820 is also a solid alternative even though it is already in the market for a year. The Lumia 820 boasts solid build quality and a nice feature set of Nokia's apps and services. Yet another option is the more affordable Nokia Lumia 625, still offering 4G LTE connectivity and a large 4.7-inch screen.

The Desire 601 is by no means inferior to its competitors, but we felt that HTC could have brought it to the market earlier. Nonetheless, the Desire 601 will not disappoint anyone who is looking for an affordable 4G LTE Android smartphone.

Write a Review
Compare This | Specifications
Good design and handling
Affordable
HTC BoomSound
Decent overall performance
Display could be better
Awkward two-button layout
Our articles may contain affiliate links. If you buy through these links, we may earn a small commission.
Sponsored Links