The HTC 10 uses a Qualcomm Snapdragon 820 SoC with up to 2.2GHz clock speed. With Qualcomm’s flagship tier processor on the device, this puts the HTC 10 on par with the likes of the LG G5 and Samsung Galaxy S7 Edge. HTC also packs 4GB RAM into the HTC 10, so it should be more than capable at handling multiple processes, on top of fast load times. According to HTC, the 10 has been engineered from the ground up to run faster, lighter, and use less memory.

Since we are comparing across flagship tier smartphones, we’ll include the Sony Xperia X (the X Performance isn’t officially in Singapore).

SunSpider JavaScript measures the browsing performance of a device when processing JavaScript. It not only takes into consideration the underlying hardware performance, but also assesses how optimized a particular platform is at delivering a high-speed web browsing experience. While the HTC 10 didn't outrun its peers in this benchmark, we actually found its real-world browser performance to measure up nicely against its rivals. 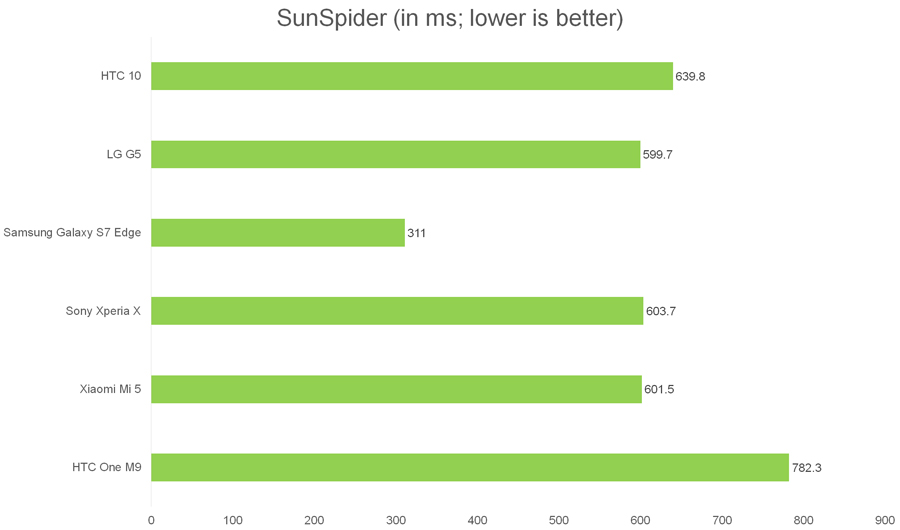 Quadrant benchmarks a device’s CPU, I/O, and GPU performance. The HTC 10 has a strong performance in this benchmark, just falling short of the Exynos-powered S7 Edge. 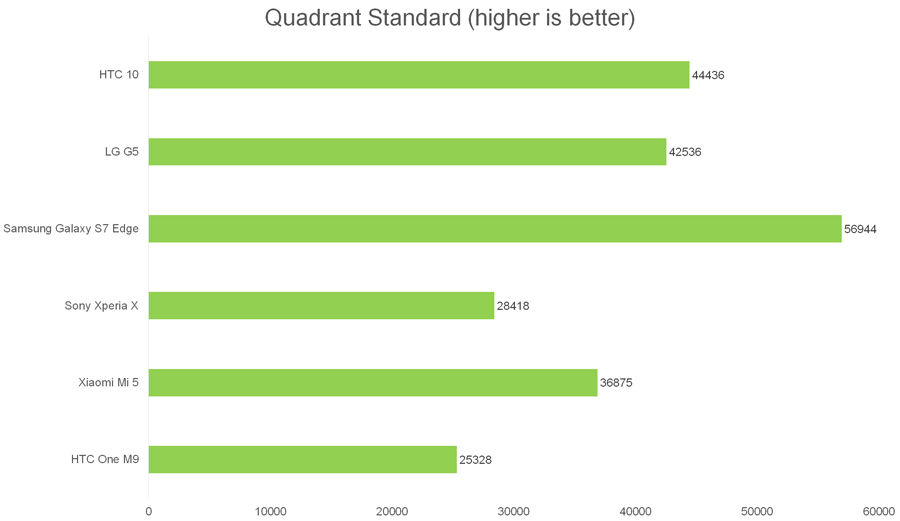 3DMark’s Ice Storm Unlimited test uses a mix of graphics and physics tests to measure hardware performance. The first test measures the GPU’s ability to process lots of vertices, while the second does the same thing with lots of pixels and post-processing effects. Finally, the physics test switches the load to the CPU to test its ability to process physics simulations, while keeping GPU load low. With the HTC 10 sitting together with the top scorers of this benchmark, it’s clear to us that the phone performs respectably for its asking price. 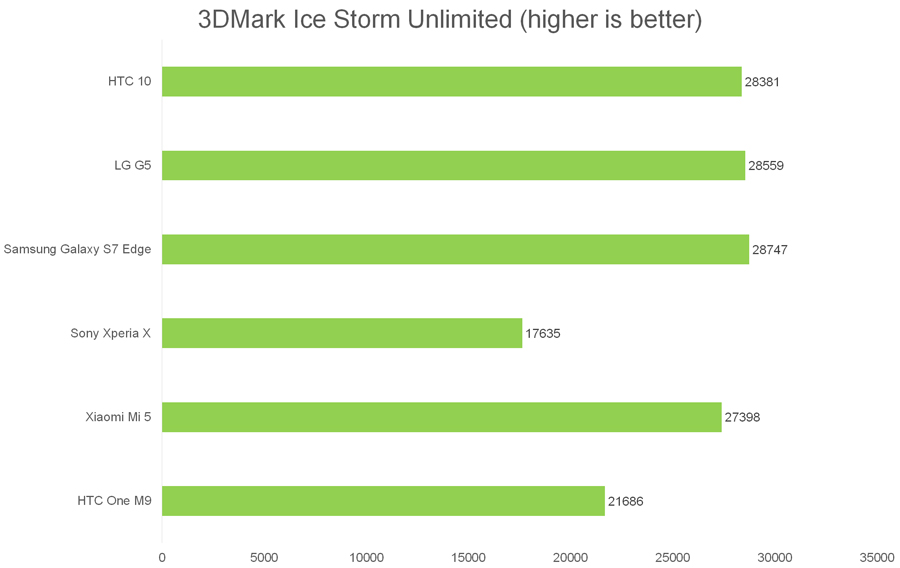 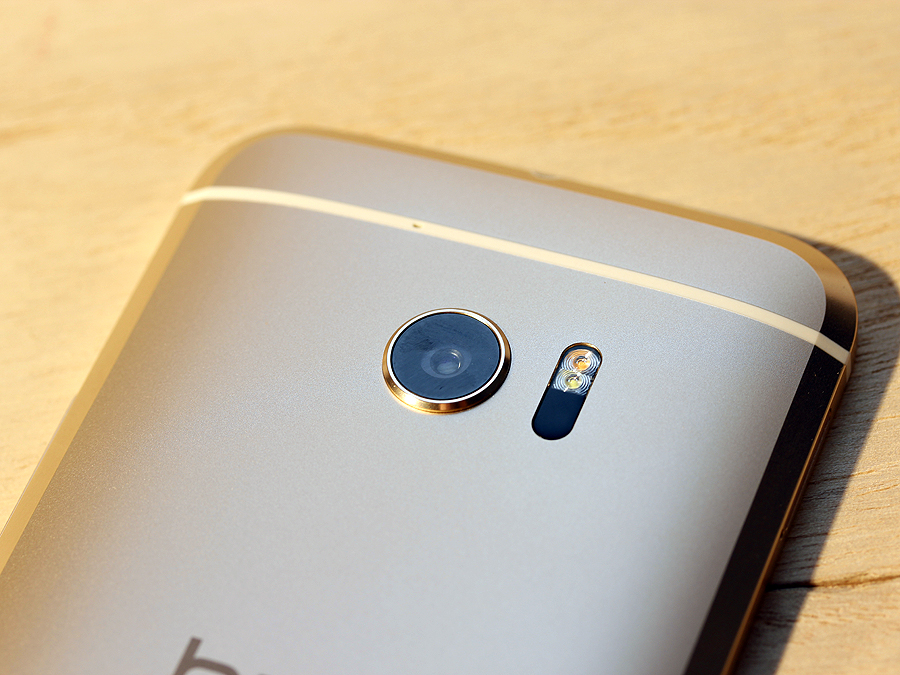 HTC 10 uses a 12-megapixel rear camera with optical image stabilization and an improved laser autofocus. HTC made it a point to share how each pixel on their camera sensor has a pixel size of 1.55μm, which gives them “136% more light in every shot”. For comparison, the Galaxy S7’s camera has a pixel size of 1.4µm. The phone is also capable of shooting in RAW format, if you do choose that option in its Pro mode (a nicely packaged Manual mode of sorts). 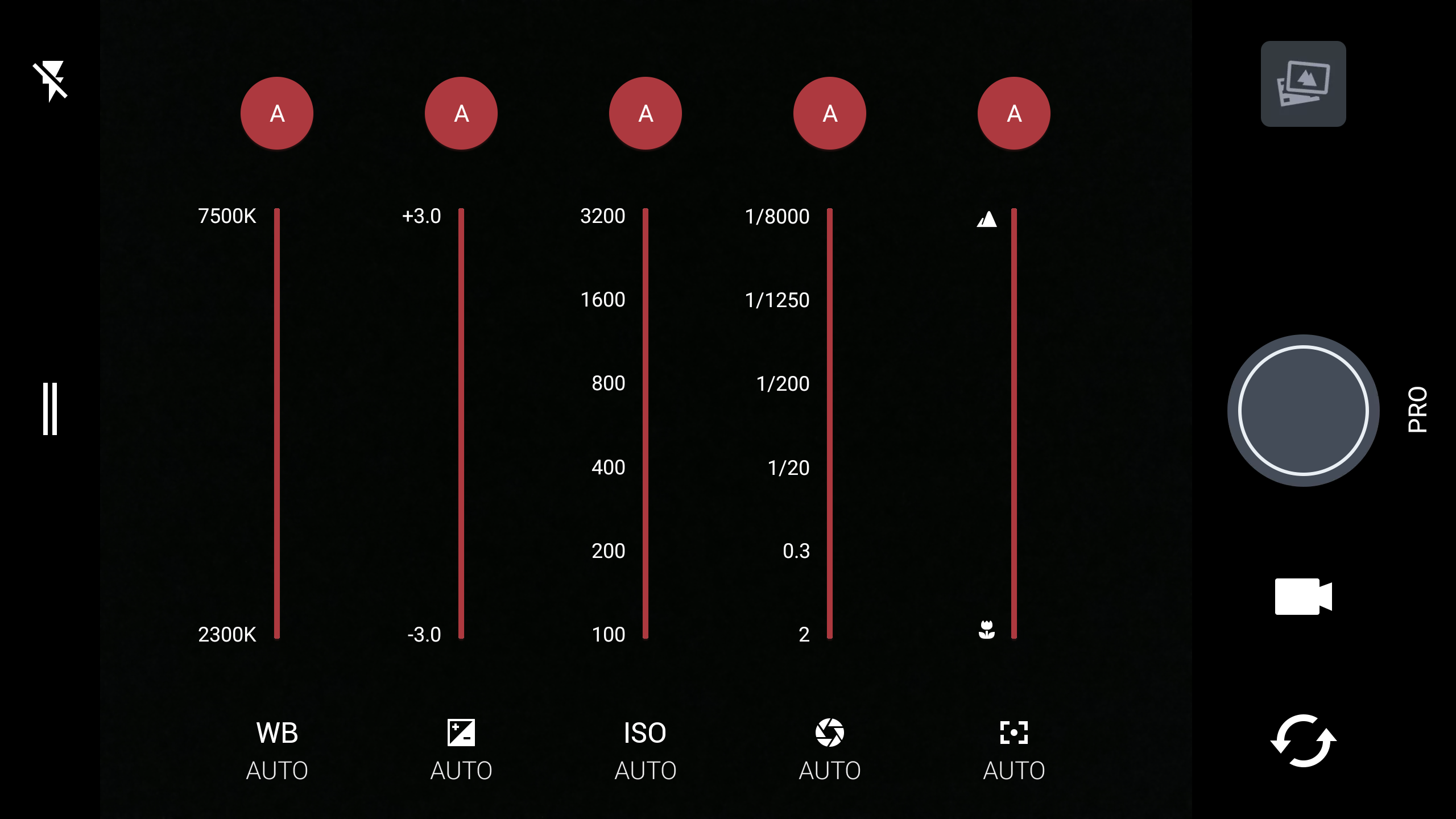 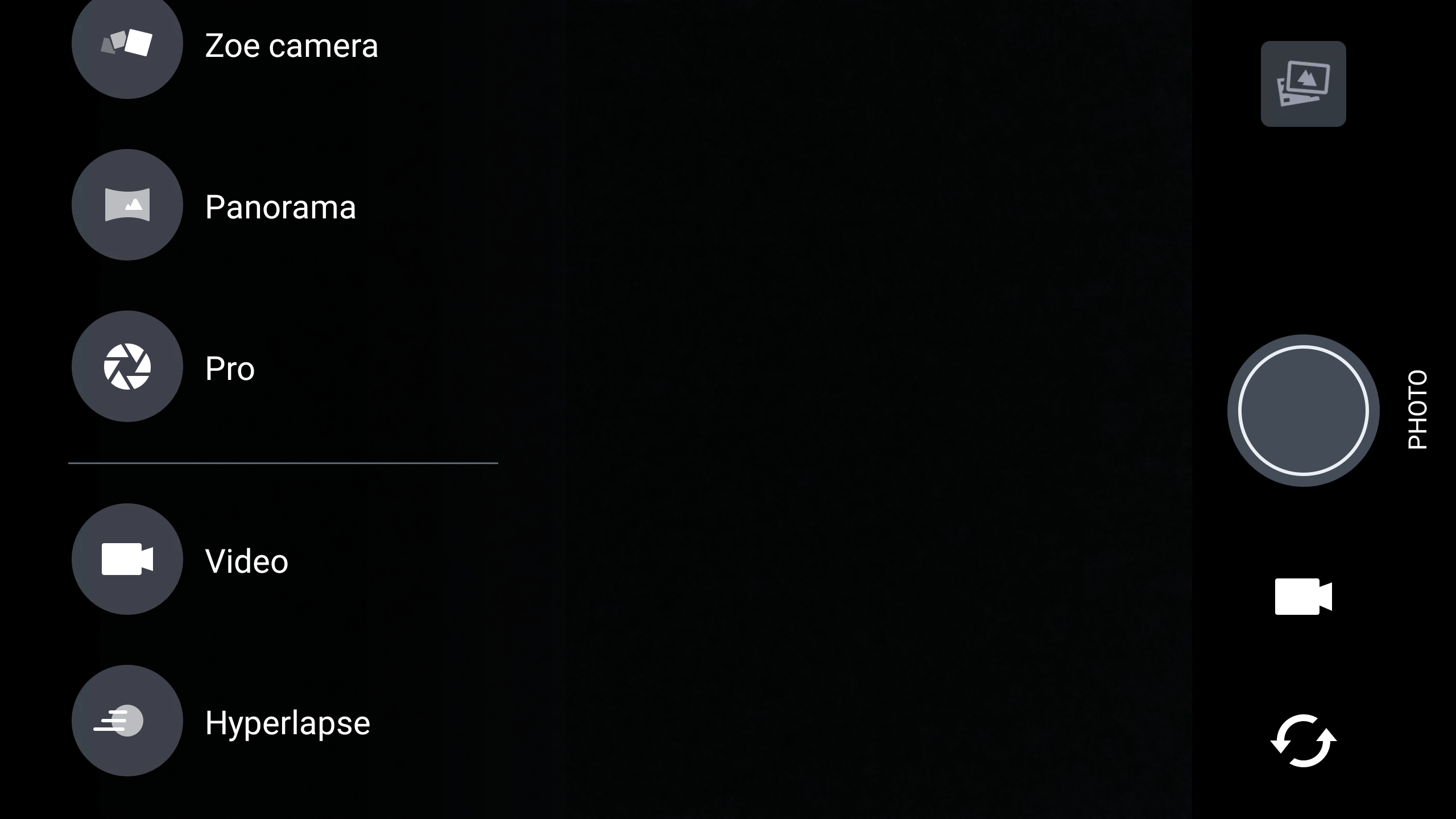 The autofocus feels swift enough for our purposes, and we really appreciate the optical image stabilization on the cameras. If you’re a frequent smartphone shooter, you’ll find the HTC 10’s camera simple and easy to operate. Heck, even the front-facing camera has OIS. 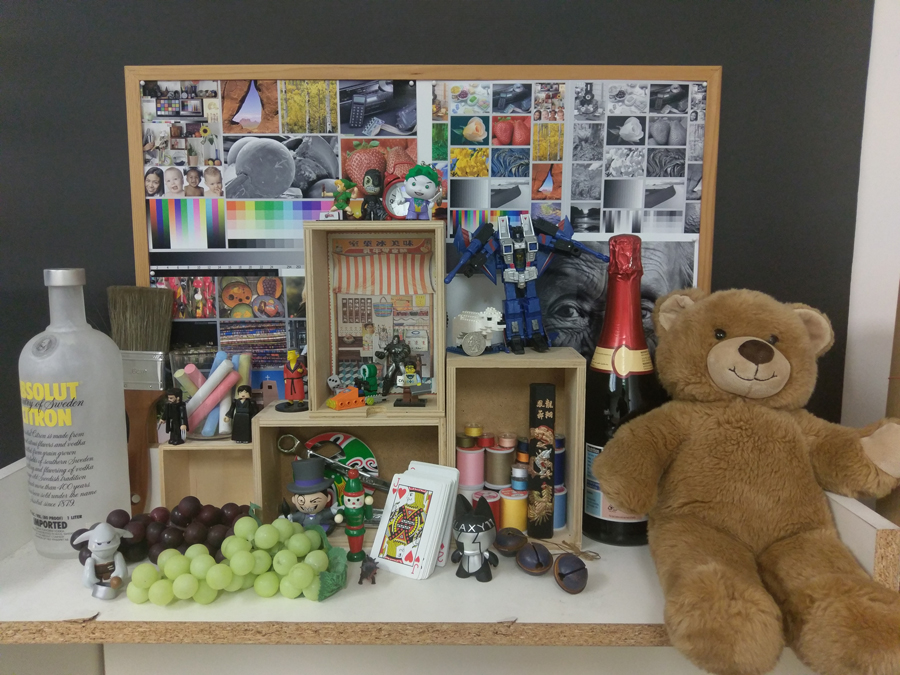 The image sharpness and detail produced by a HTC 10 is commendable. It captures creases nicely, but it’s unable to capture the threads on the spool (then again, most smartphones can’t do so). Our only gripe is its color reproduction. While the HTC 10 seems a little more neutral, we’ve been spoilt rotten by vibrant shooters, like the S7 Edge and Xperia X. That said, you can check out the sewing compartment in our test shot to see how accurate the HTC 10 can be. It’s not the best there is, but we’ll take it.

The phone packs a non-removable 3,000mAh battery that supports Qualcomm Quick Charge 3.0, which means it takes just 30 minutes to top up its charge to 50%. Still, the HTC 10 has an average battery performance compared to the other flagship phones listed here. Since the HTC 10 is a powerful phone geared towards folks who are active on social media and/or online content, it would be wise to carry a power bank on longer days. It's also disappointing that the HTC 10 doesn't last as long as its predecessor. 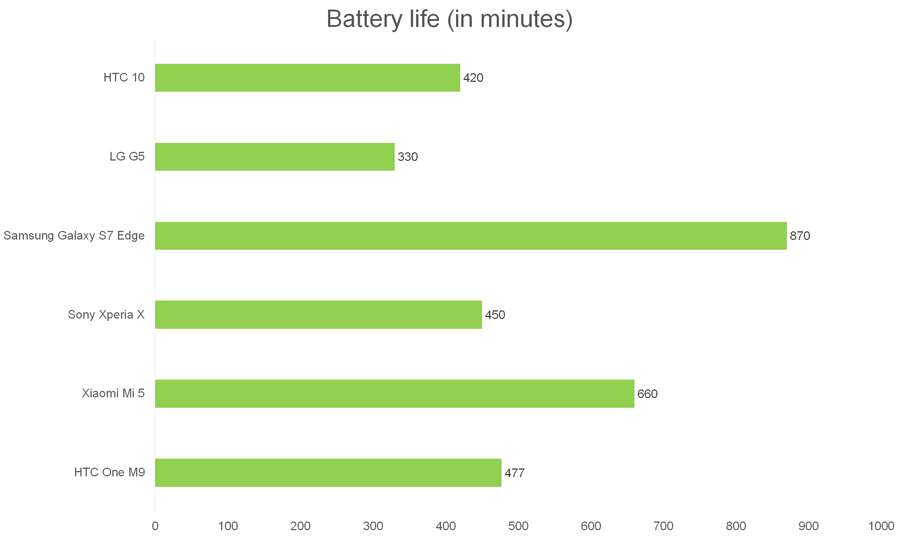 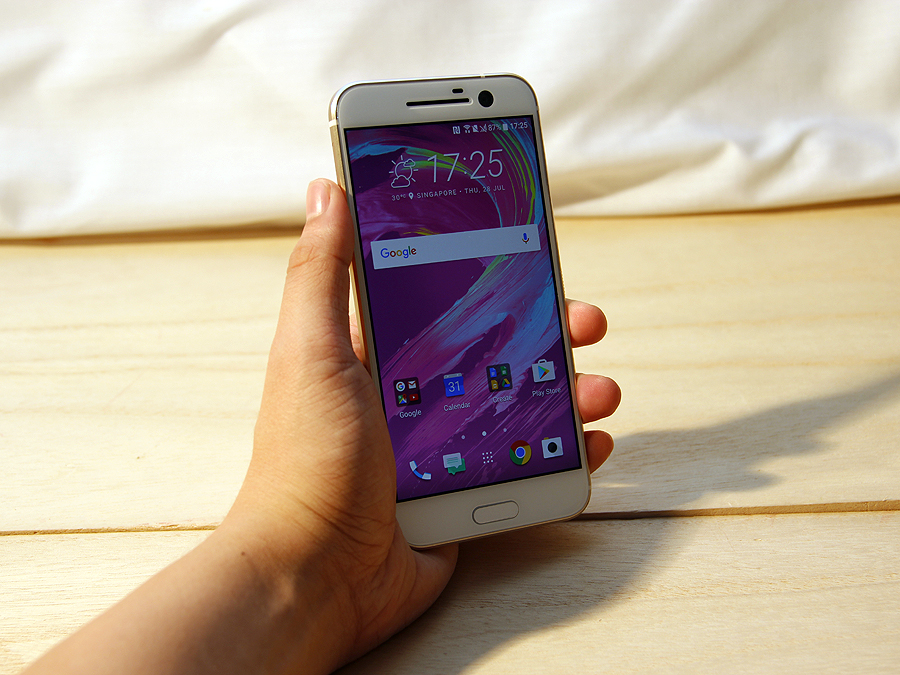 The HTC 10 is visually unique, with a lovely display and very good audio. It also uses top-end parts, and has a decent camera and an equally decent battery life. Finally, it caters to folks who are of a younger, energetic crowd. While it has its own UI features, it does not interfere with the stock Android experience.

That said, each individual aspect of the HTC 10 is beaten (or at least matched) by the other flagships listed here. There’s always another smartphone that has a better camera, better aesthetic, better battery life, or better price with similar parts. This makes the HTC 10 less exciting than its rivals, even if it’s a good flagship smartphone through and through. It definitely scored well, but it’s not a perfect 10. 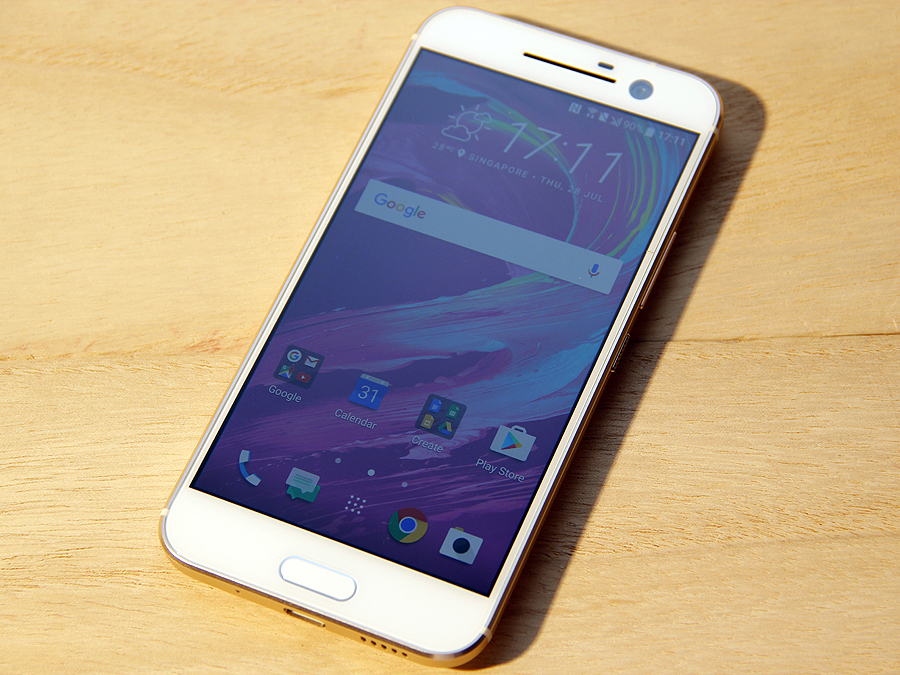 The 32GB HTC 10 is priced at S$898. It can be bought at Lazada, and you get a free HTC Mini+ Bluetooth accessory (the deal that includes the Iceview case is already sold out). Alternatively, the phone can be bought from other official HTC retailers.