In the world of computing, workstations often refer to specialized systems built for professionals who might require it for tasks that require substantial CPU or GPU processing power or large amounts of memory. Some examples include managing complex data sets, engineering simulations as well as graphics and animation work. Given the nature of the tasks that they are asked to do, it is no surprise then that they are often bulky and ungainly systems. 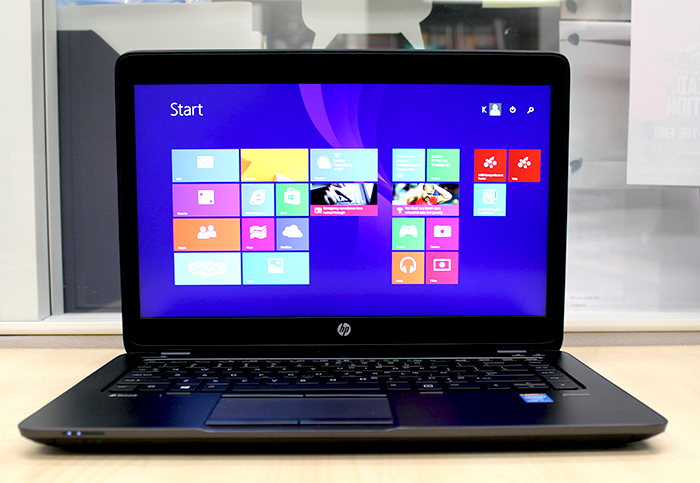 HP is one of the world’s leaders in workstation systems and has a portfolio that consists of desktop systems, mobile workstations and even all-in-one systems. Two years ago, we reviewed the very innovative HP Z1, a workstation AIO that features upgradeable components. And now, they are following up on the Z1 legacy with the new ZBook 14, which they claim is the world’s first workstation Ultrabook. Well, to be sure, it does fit the physical requisites of an Ultrabook as it is just 21mm thick and weighs just around 1.6kg, or roughly around just 300g more than ultra-thin notebooks like the MacBook Air and Lenovo Carbon X1. But does this slim Ultrabook really have what it takes to be a true workstation? Join us as we find out.

First of all, while HP calls the ZBook 14 the world’s first mobile workstation Ultrabook, it is necessary to clarify that the ZBook 14 has numerous variants and different specifications, and that not all variants qualify as an Ultrabook. This is because some of the conditions must be met before a notebook can be called an Ultrabook. For Haswell-powered systems, these conditions include not exceeding 23mm in thickness for models with a 14-inch and larger display, and it must also offer at least 6 hours of HD video playback and be able to last at least 9 hours on Windows 8 idle. Furthermore, It must also be able to resume from hibernation in just three seconds. Considering how quick it must recover from hibernation, this means that all Ultrabooks must utilize some sort of flash storage. In that sense, while the ZBook 14 certainly conforms to the physical requisites, only the variants with flash storage can be considered true Ultrabooks. 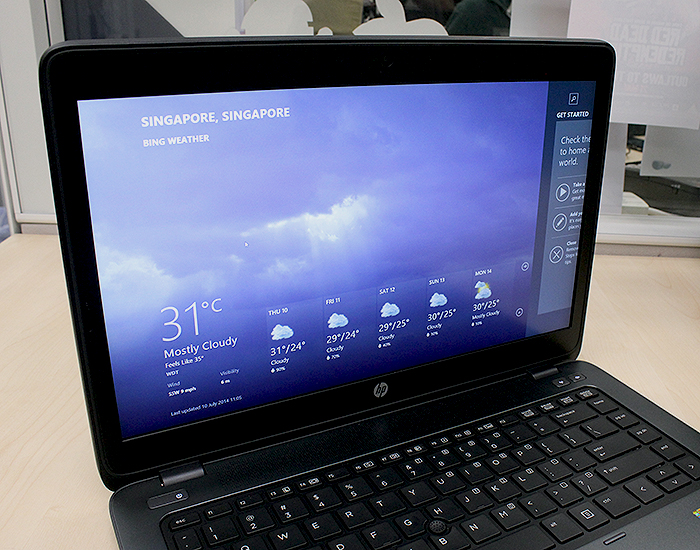 Strictly speaking, since our unit doesn't have a touchscreen, it cannot be called an Ultrabook, but anyway, let’s take a closer look at it now. Our unit is powered by a dual-core Intel Core i7-4600U processor (2.1GHz, 4MB L3 cache), which also happens to be the most powerful CPU that HP offers for the ZBook 14 and it comes with 8GB of RAM (the maximum) and a workstation-class AMD FirePro M4100 mobile GPU that has 1GB of dedicated GDDR5 RAM. On the other end of the spectrum, the ZBook 14 can also be outfitted with less powerful CPUs such as the Core i5-4300U and Core i5-4200U.

For those wondering the class of graphics performance to be expected from the AMD FirePro M4100 GPU, it's graphical prowess for gaming related tests would peg it in the range of the AMD Radeon HD 8750M, NVIDIA GeForce GT 730M / 640M. But coming from the FirePro professional line-up of GPUs, these would be better tested and qualified for use in demanding environments, not to mention acceleration support in workstation programs that are designed to take advantage of the GPU for certain processing and rendering tasks.

The first things that most users would notice about the HP ZBook 14 is not that it is remarkably slim and light, despite its rather beefy specifications. As we have mentioned, the ZBook 14 measures only about 21mm thick and weighs around 1.6kg. As such, it is very manageable and portable. Its lightweight is due mostly to the fact that the chassis is made mostly out of plastic. Even so, it feels rigid and solidly put together. The lid also features an aluminum panel with a recessed HP logo, which gives the ZBook 14 a more premium look and feel. The ZBook 14 is available only in black, which we think is fitting given its intended purpose. 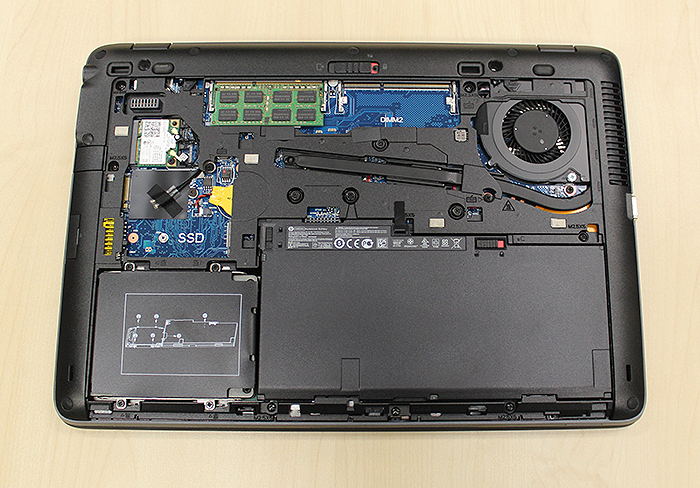 One unique aspect of the ZBook 14 is that it is extremely easy for users to upgrade its components. Simply flip the notebook over on its lid and unlatch the HP Easy Access Door to gain access to its internals - no tools whatsoever required! With the bottom panel out of the way, users can easily replace the memory and storage in just mere minutes.

The ZBook 14 offers a healthy selection of I/O ports, but we suspect most users would be miffed by the fact that there is no HDMI output. However, the ZBook 14 does offer VGA and DisplayPort connectivity, which is arguably more practical and forward-looking. For HDMI connectivity, you can get your ownDisplayPort to HDMI converter to achieve this.  There’s also four USB 3.0 ports, an Ethernet jack, SD card reader and a Smart Card reader. 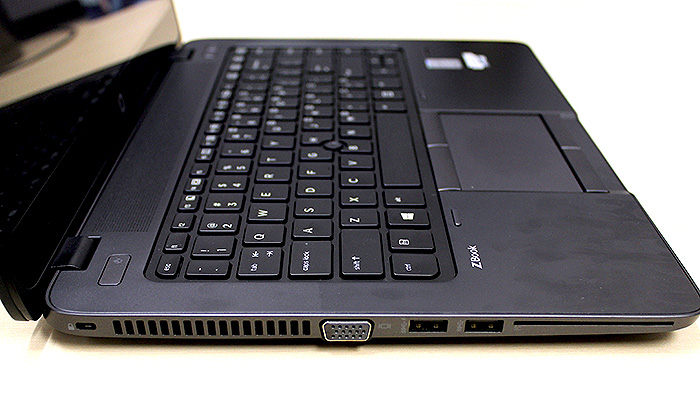 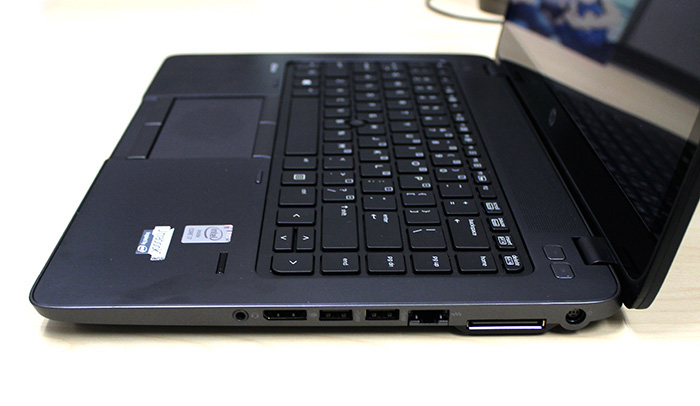 When it comes to networking, the ZBook 14 is offered with a selection of different Intel networking adapters, offering standard dual-band 802.11 a/b/g/n connectivity or the newer Wireless-AC standard. Our unit happens to have Intel's latest Dual-Band Wireless-AC 7260 networking card.

The ZBook 14 has a chiclet keyboard, which is pleasant and satisfying to use. The size of the keys is great and the layout is logical and typical, so there is no quirk that might potentially require users to adapt. The trackpad is not clickable, but it is relatively large and we found it to be accurate and responsive to use. It also has four separate buttons, two above the trackpad and another two below, for the left and right click functions when using the pointing stick and trackpad respectively. These buttons are fairly large, but feel a bit mushy to use. Finally, to the bottom right of the keyboard is a fingerprint scanner. 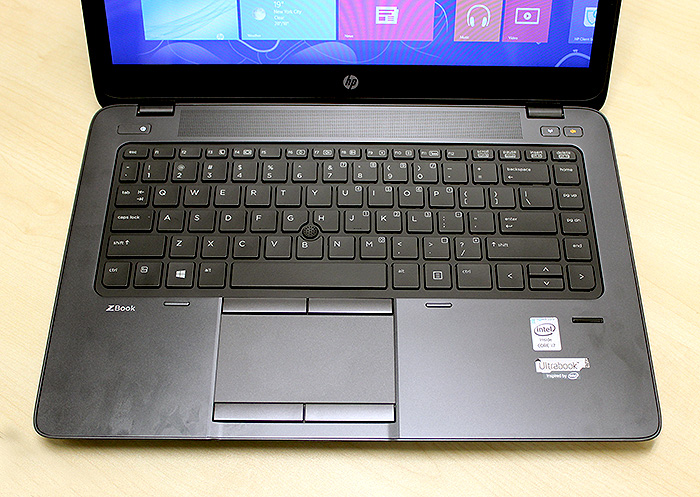 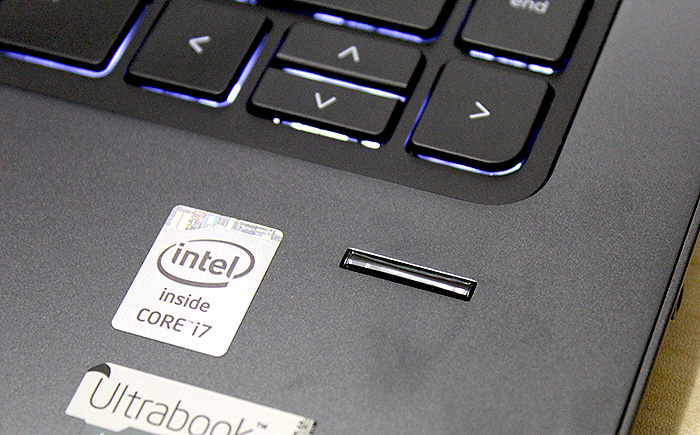 Since the ZBook 14 is a positioned as a mobile workstation, we were not surprised to find that its speakers were average at best. Like most typical notebooks speakers, the ZBook 14’s speakers sounded thin and weak. If you do need to listen to music while working with the ZBook 14, we would highly recommend investing in a pair of decent headphones or speakers.