In February, HP announced the Z1, the world’s first all-in-one (AIO) workstation that features a 27-inch display and is also easily serviceable, allowing users to swap and upgrades parts.

At first glance, comparisons with the Apple iMac and HP’s Omni and TouchSmart AIOs are unavoidable. However, while the iMac, Omni and TouchSmart AIOs might have the same design philosophy of cramming all the hardware into the display, the above mentioned products are targeted at consumers. The HP Z1, on the other hand, is a proper workstation designed for prosumers and professionals engaging in graphics, 3D rendering and imaging work. As a result, the HP Z1 is specced with workstation-class components such as Xeon processors, error-correcting memory (ECC) and the latest NVIDIA Quadro graphics. 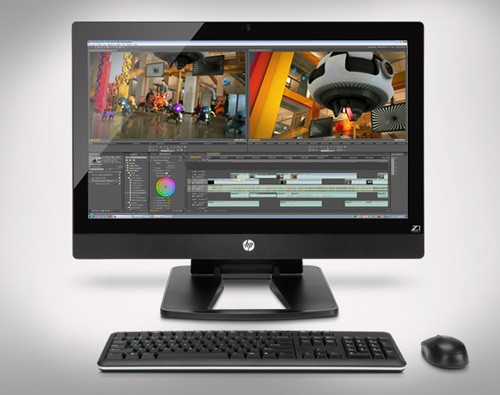 As mentioned in our Z1 Teardown article, HP’s latest AIO is based on the Intel C206 chipset which offers support for the latest Sandy Bridge Xeon processors. The Z1 can be specced with three different processor options which are as follows:

Additionally, the Z1 can also be equipped with one of four different NVIDIA Quadro solutions:

Aesthetically, the Z1 is certainly a stylish-looking piece of kit and would definitely up the hip-quotient of any work desk. Moving on, the overall look is clean and minimalistic and with its 27-inch, 2560 x 1440 pixels resolution IPS display, it is big and imposing too. It weighs every bit as much as it looks. The display itself weighs close to 20kg, which is actually not that surprising considering it houses all the components - power supply, processor, memory, graphics, heatsinks and blowers.

The heft of the unit is supported by a cleverly engineered stand that can be tilted forwards and back by around 25 degrees. It can also be raised or lowered by 10cm. The stand is also what makes it so easy to upgrade and swap parts in the Z1 as it can be folded to hold the Z1 in a completely flat position. In this position, the innards of the Z1 can be accessed simply by reaching for two latches located at the bottom of the screen. A damper then helps lift the heavy screen up. This is as idiot-proof as it can get; if you can open a door, you can open the Z1.

Write a Review
Compare This | Specifications
Sleek, lovely-looking form factor
Gorgeous 27-inch IPS display
Upgradeable
Flexible stand
Very expensive
No Thunderbolt interface
Quadro cards will only perform if software and drivers are optimized for it
Our articles may contain affiliate links. If you buy through these links, we may earn a small commission.
Sponsored Links