Apple hikes prices of products in Japan by as much as 25%, unlikely to happen in Singapore (for now)
Product Listing
AcerAftershockAlienwareAorusAppleArchosASUSAxiooDellDopodDreamcoreFujitsuGatewayGigabyteHandiiHPHuaweiLenovoLGMicrosoftMSINECNEOPanasonicRazerSagerSamsungSonySuzukiToshibaViliv The unit that I received for testing is powered by Intel’s Core i7-1165G7 processor and it comes with 16GB of memory and a 1TB SSD. As I mentioned on the previous page, this model has since been replaced by a newer one that comes with Intel's newer Core i7-1195G7 processor. The two processors are mostly the same except that the Core i7-1195G7 has slightly higher clock speeds. Therefore, performance shouldn't vary too much.

At any rate, these specifications are very reasonable for a high-end flagship-class ultraportable. Naturally, I’ll be comparing its performance against other notebooks in its class like the ASUS ZenBook 14X OLED, Lenovo Yoga Slim 7i Carbon, and more.

Here's how it stacks up against its rivals:

Performance was mostly average. Its scores across PCMark 10, CPU-intensive benchmarks like Geekbench and Cinebench, and even its gaming scores, were all toward the middle of the pack. The only area of concern would be its below average storage benchmark score and speed. On gaming benchmarks, it also showed that it resisted throttling quite well as evidenced by its mostly consistent performance on Tomb Raider. That said, when running Tomb Raider, it did get really loud and warm to touch. 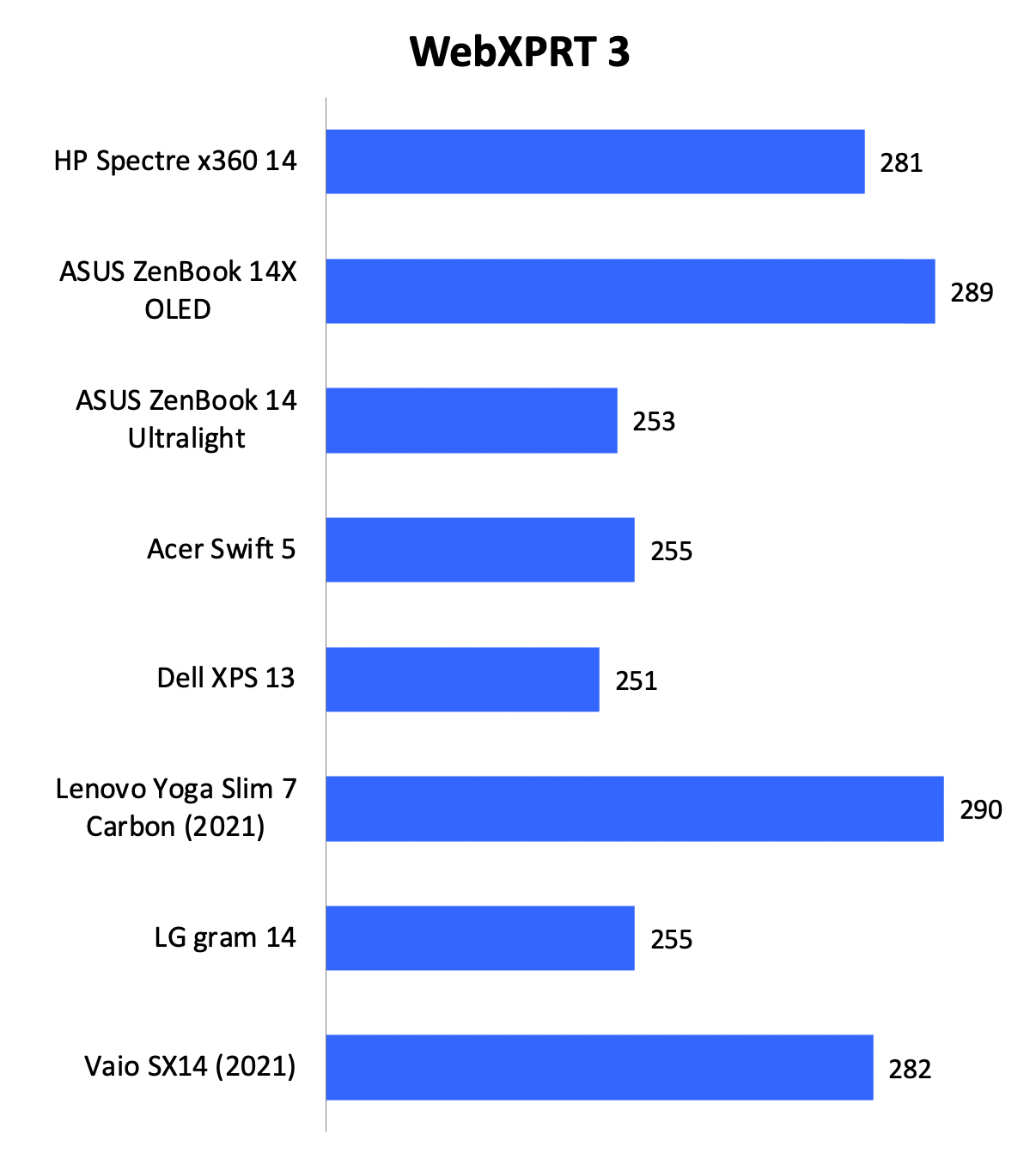 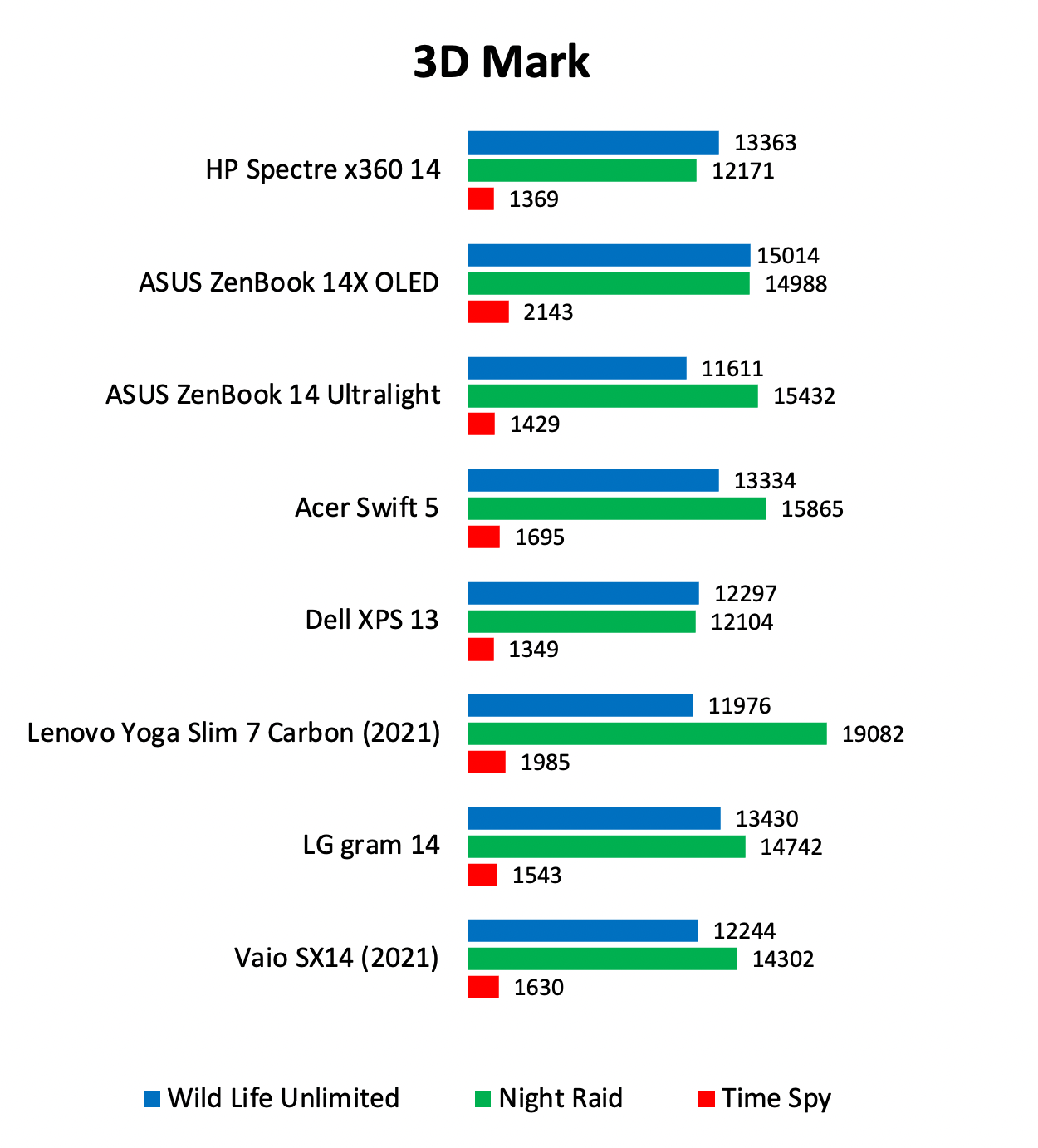 Battery life was quite impressive, which is to be expected given that its 66Wh battery is one of the largest in its class. In our Modern Office test, which consists of  a mix of workloads like emails, editing documents and spreadsheets, and video conferencing, it lasted 8 hours and 39 minutes – that’s one of the longest in its class. And bearing in mind that we are doing it with the display at maximum brightness, it’s completely reasonable to think that it will last over 10 hours at more typical brightness settings. Even on the more intensive Gaming workload, it lasted close to 3 hours which is quite impressive. Power consumption figures are within expectations for a notebook with its type of display and specifications. 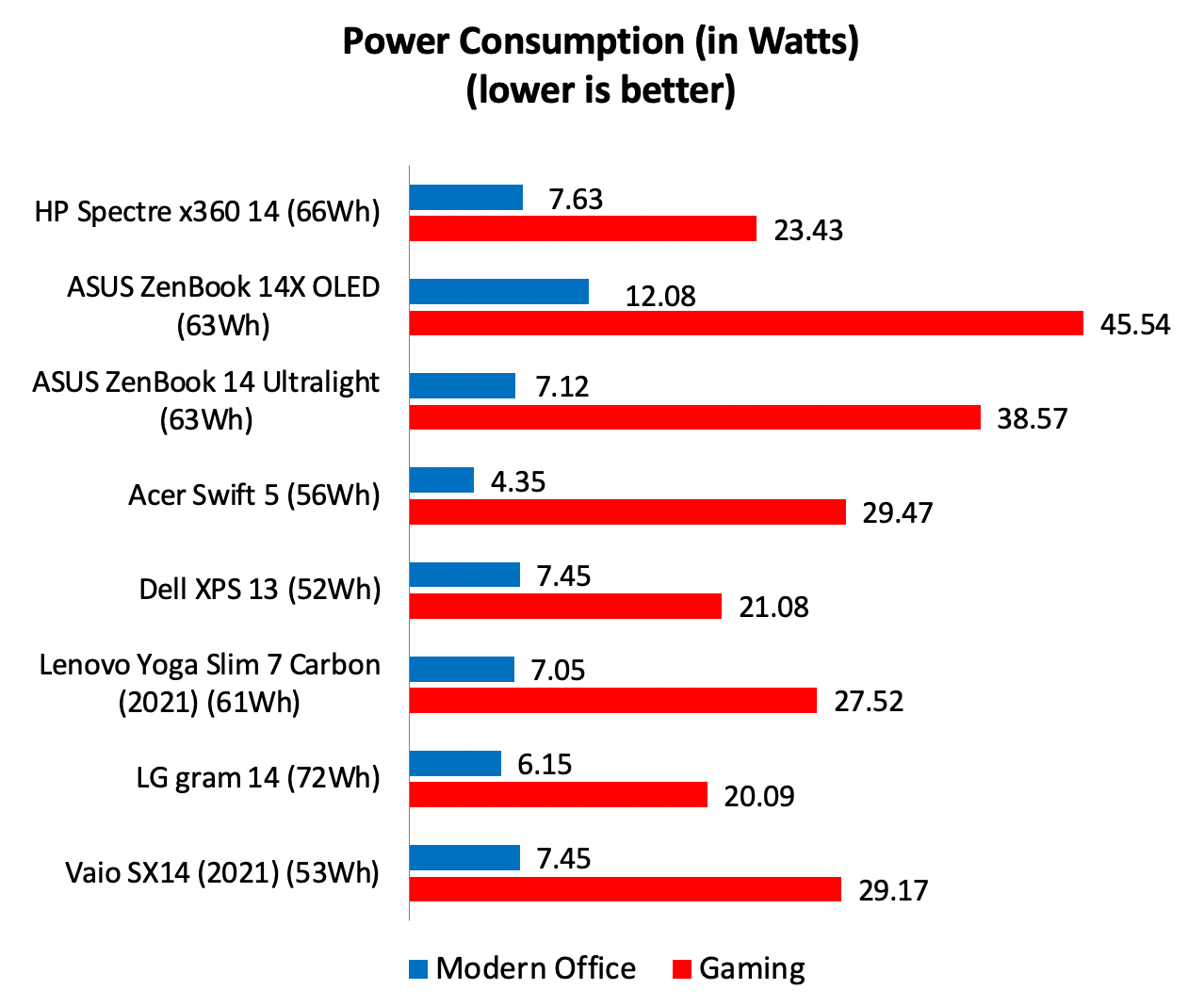 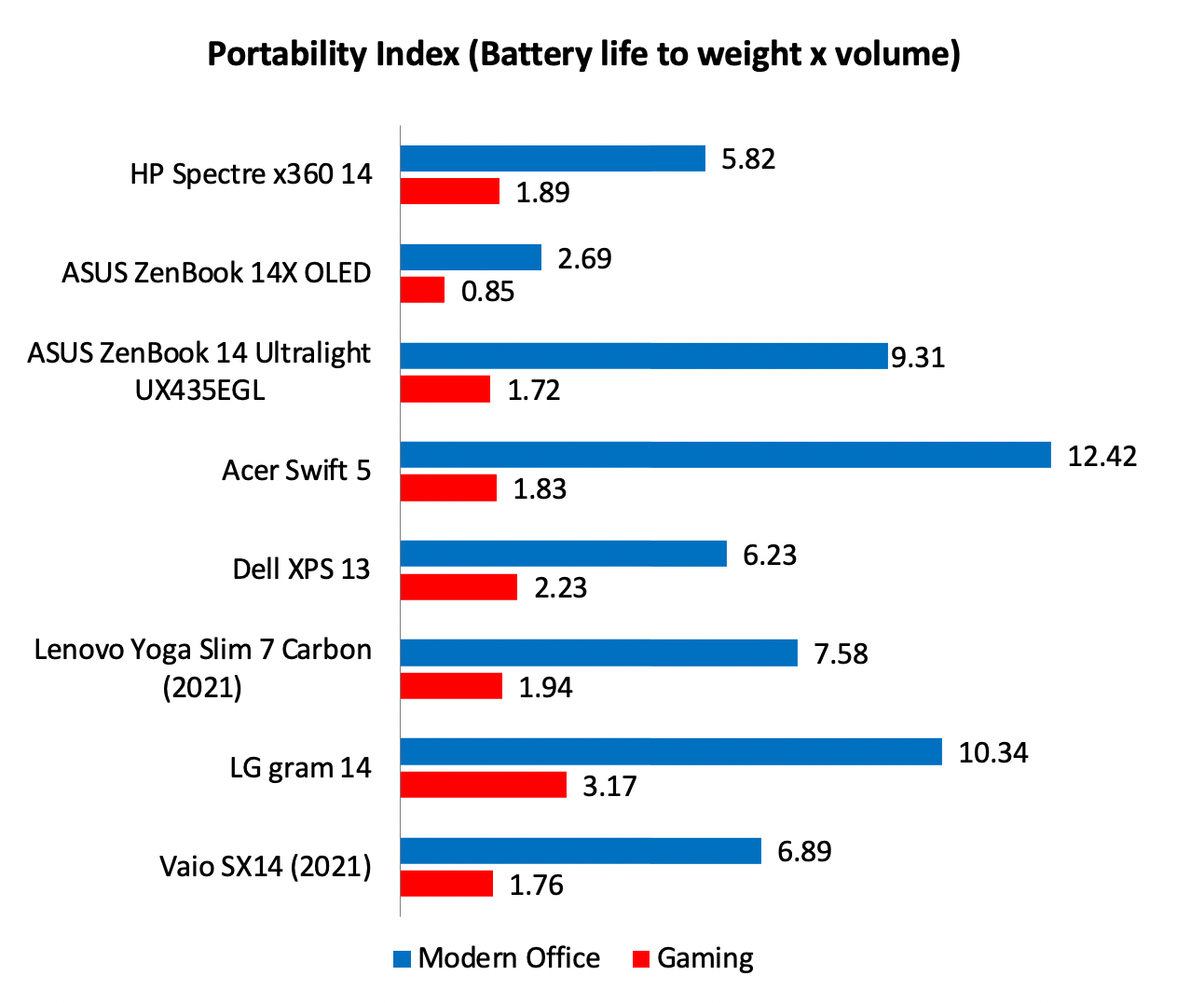 Excellence comes at a price

HP’s new Spectre x360 14 is, by all accounts, a solid ultraportable notebook. It has a distinctive design, its build quality is first-rate, the OLED display is gorgeous, it has Thunderbolt 4 ports and even a USB-A port, and it has long battery life.

Where the Spectre x360 14 really stands out from the competition is that it has a convertible design. This flexibility gives it an advantage over competitors. Admittedly, its size and heft mean it’s a little compromised in tablet form but at least that option is there. And it makes the Spectre x360 14 more enjoyable to use especially if you like to lounge around on your sofa and bed and catch up on news or videos. That OLED display really elevates the media consumption experience. My only reservations are its performance and price. Looking at the charts above, it’s clear that its performance is average, which probably shouldn’t be the case given that it costs close to three grand.

With a retail price of S$2,899, the Spectre x360 14 is not cheap. If getting the most bang out of your buck is a priority, it’s clear that you are not going to get that from this notebook. What you are getting, however, is a stylish and portable convertible notebook that comes with an OLED display and very high specs. And to be fair, a comparable convertible notebook, like a Dell XPS 13 2-in-1 or a Microsoft Surface Pro, is going to set you back almost as much – and those don’t feature OLED screens.

To sum up, the Spectre x360 14 isn’t as attractive a proposition as its predecessor was. It’s still a solid notebook, but the competition has improved markedly and options now exist that offer considerably more value for money. And that is hard to disregard. In other words, for most people, there are more sensible alternatives. But if a notebook that can double up as a tablet is one of your main requirements, then this is arguably the best high-end option. As long as you can afford it.