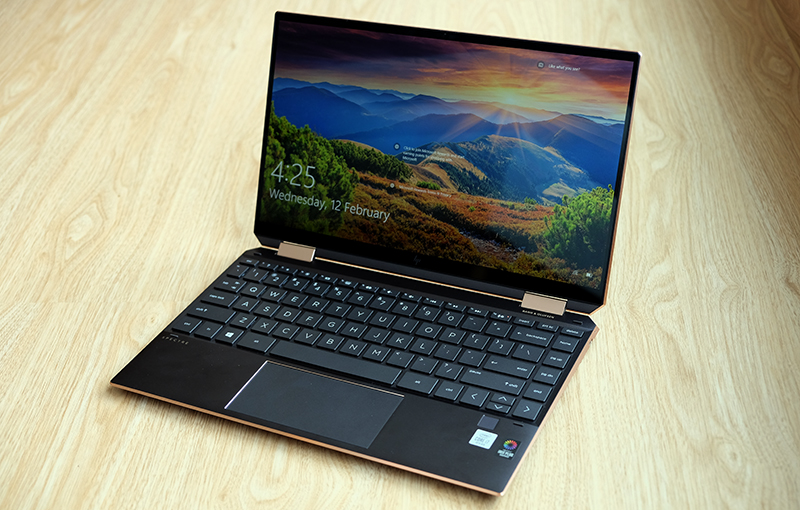 Good things come to those who wait. Announced back in October, the HP’s updated Spectre x360 13 has finally arrived on our shores. The name might be the same but the machine has been updated and improved in many meaningful ways. And it has to be if it was to compete against the likes of Dell and its XPS notebooks, ASUS’ neverending lineup of ZenBooks, and Microsoft’s sexy Surface devices. I will go into details later but briefly, the Spectre x360 13 sports Intel’s newest processors, improved internals, and a thoroughly updated design that is sleeker and gives the notebook a much smaller footprint. Let’s not waste any more time and dive straight into the review.

The Spectre x360 13’s overall design hasn’t changed. It still features sharply chiselled edges and has a highly angular profile with bold accents. Two colours are available at launch: Nightfall Black, which comes with Copper Luxe accents; and Poseidon Blue which comes with Pale Brass accents. Both are equally attractive though my personally prefer Nightfall Black. Black and the copper accents, which look like rose gold to me, are a winning combination. 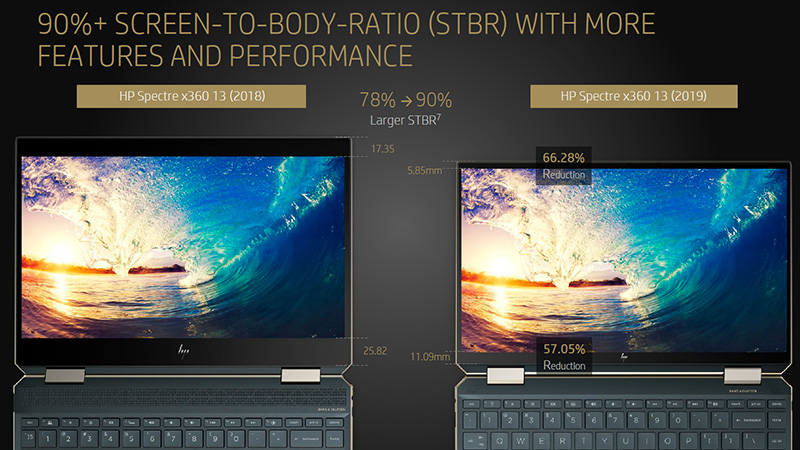 The big change has to do with the bezels, which have been more than halved. 11.5mm have been shaved from the top bezel, bringing it down from 17.35mm to just 5.85mm. Fortunately, this hasn’t come at the expense of the web camera, which remains above the display and still supports Windows Hello. Speaking of which, there's also a privacy kill switch that disables the web camera. The bottom bezel sees an equally big reduction – from 25.82mm to 11.09mm.

The net effect of all this bezel shrinking has an amazing effect on the footprint of the device.

Looking at the table above, we can see that massive reductions were made to the depth of the notebook and HP were able to reduce the Spectre x360 13’s footprint by a significant 11%. And if you are obsessed about screen-to-body ratios, the new Spectre x360 13’s 90% count totally trumps its predecessor’s 78%. 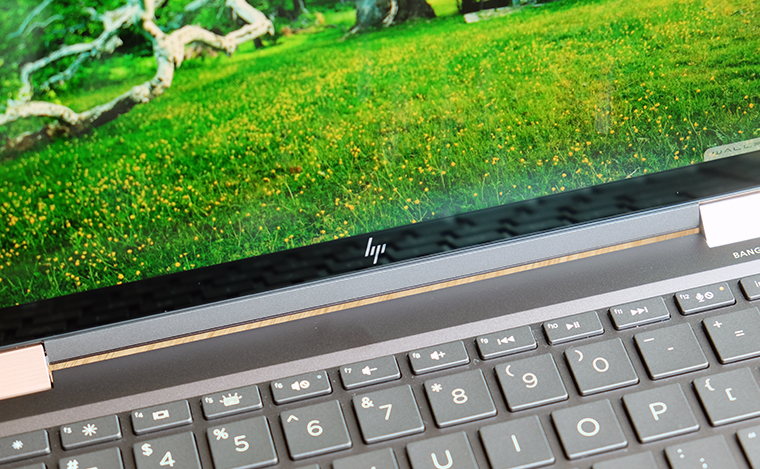 However, the new Spectre x360 13 isn’t entirely more compact than its predecessor because thickness has actually been increased from 14.5mm to 16.9mm. If you do the math, you’d find that overall volume is actually very slightly greater.

In the real world, my take is that the reduced footprint is much more appreciable even if the new Spectre x360 13 is more voluminous. It fits into bags much more easily. And since weight is unchanged at 1.3kg, the new Spectre is much handier to hold as a tablet. 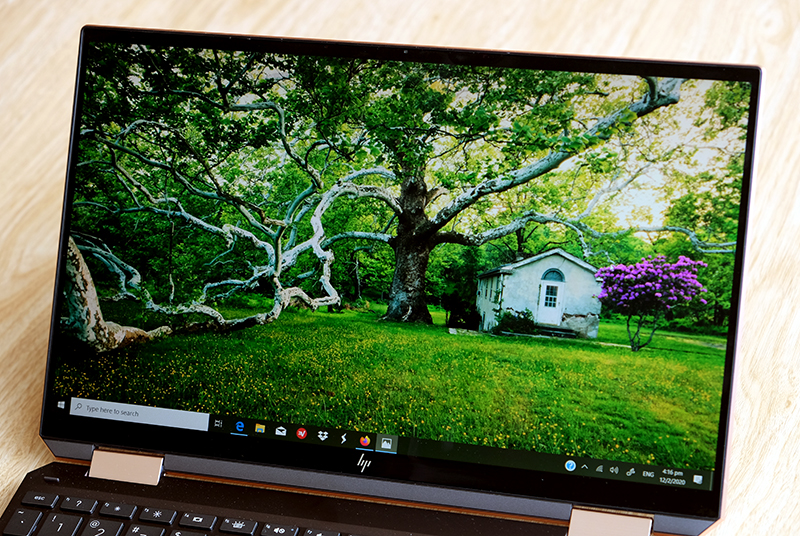 The display itself measures 13.3 inches – no change from its predecessor. And as usual, there will be Full-HD and 4K options. The 4K options will feature OLED displays, which, theoretically speaking, should yield more vibrant colours. I haven’t seen them for myself so I’ll refrain from commenting further.

The Full-HD display that we have for review, however, is very capable and easily one of the best in its class. It’s plenty sharp, has good colours, and most importantly, has sufficient brightness so that it can be used in challenging environments (a common problem for most ultraportable notebooks). All displays are touch-capable and very protected by Corning Gorilla Glass. 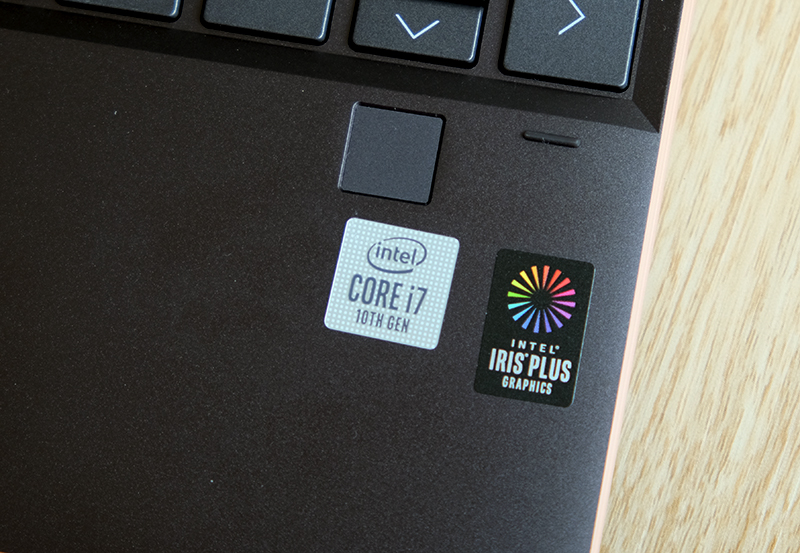 As usual, there will be a number of configurations to choose from. Customers will have the option of Core i5 or Core i7 processors, up to 16GB of memory, and up to 2TB of speedy PCIe M.2 SSD storage. The base model, however, comes with the following specifications:

Cooling has been improved too. Larger air intakes and vents improve air circulation, while a beefier internal cooling system consisting of two fans and three heat pipes draw heat more efficiently away from the processor to improve performance. 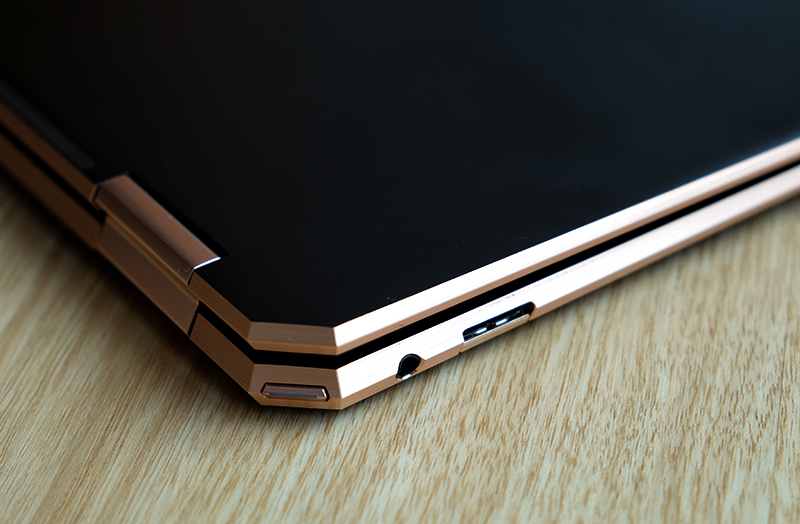 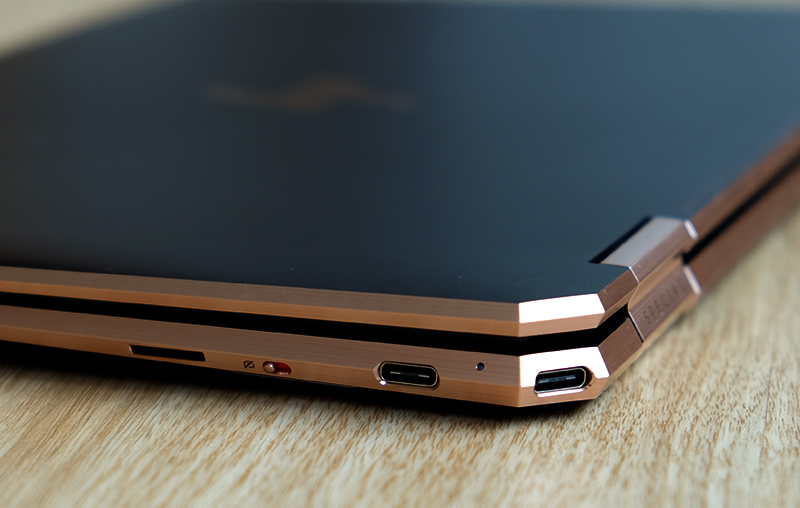 Port selection remains the same and that’s a good thing because the old Spectre x360 13 was a leader in this category. There’s two USB-C ports that support Thunderbolt 3 and a single USB-A port that supports USB 3.1. This means the Spectre x360 13 will play well with any of your existing accessories and peripherals and it will also work with any modern accessory that you may want to add on, such as an external graphics dock or Thunderbolt 3 dock. It also has a microSD card reader and wireless networking supports Wi-Fi 6 standards. 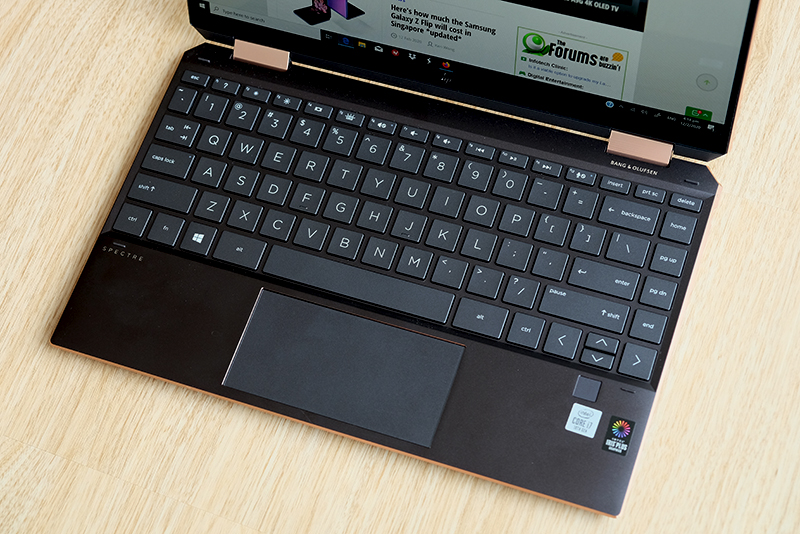 One complaint that I have with many modern ultraportables is their tiny trackpads. To be fair, there’s only so much you can do when your machine is this small but that hasn't stopped HP from making some thoughtful improvements to the trackpad. Unfortunately, the size hasn’t changed much and it’s still woefully small. It measures just 11cm across and 5.5cm from top to bottom, making it one of the smallest trackpads in it class. One upside is that it now uses Microsoft’s Precision drivers. Coupled with its glass construction, it makes for a trackpad that’s smooth, responsive, accurate, and quite pleasant to use even if it's small.

The keyboard remains great to use with large keycaps, good key pitch, a decent amount of key travel. It also has the right amount of resistance so it feels firm and pleasant to type on. My only gripe is that the layout isn’t entirely conventional as there’s an extra column of keys to the right (Home, Pg Up, Pg Down, End). As a result, first-time users will likely miss the ‘Enter’ key for at least the first couple of hours but I think that this layout is something users will get over with a little practice (hopefully).