I ran the new HP Spectre through our usual suite of benchmarks, and will be comparing it to other 13-inch Ultrabooks such as Dell XPS 13, Lenovo Yoga 900, and Acer Aspire R13. I have also included results from comparable Apple notebooks such as the Macbook Air and the newer MacBook.

Here is how the Spectre compares against its rivals.

PCMark 8 tests a system’s performance by putting it through different tasks that reflect the workloads typical of various kinds of users, for instance the casual home user or the working creative professional. The notebooks that we have gathered have more or less the same specifications - minus the Apple MacBook which is running off a less powerful Core m3 processor and the Apple MacBook Air which is powered by last generation Broadwell processor - so there shouldn’t be any significant difference in performance.

However, the Spectre somehow managed to pull an impressive lead on both the Home and Work workloads. On Home, the Spectre scored 14% better than the second-placed Microsoft Surface Pro 4 and HP Envy; while on Work, it scored 18% better than the second-placed Dell XPS 13. On the other workloads, the Spectre’s performance are more or less similar to the competition. Since there’s little hardware differences to separate them, these improvements are likely due driver improvements. 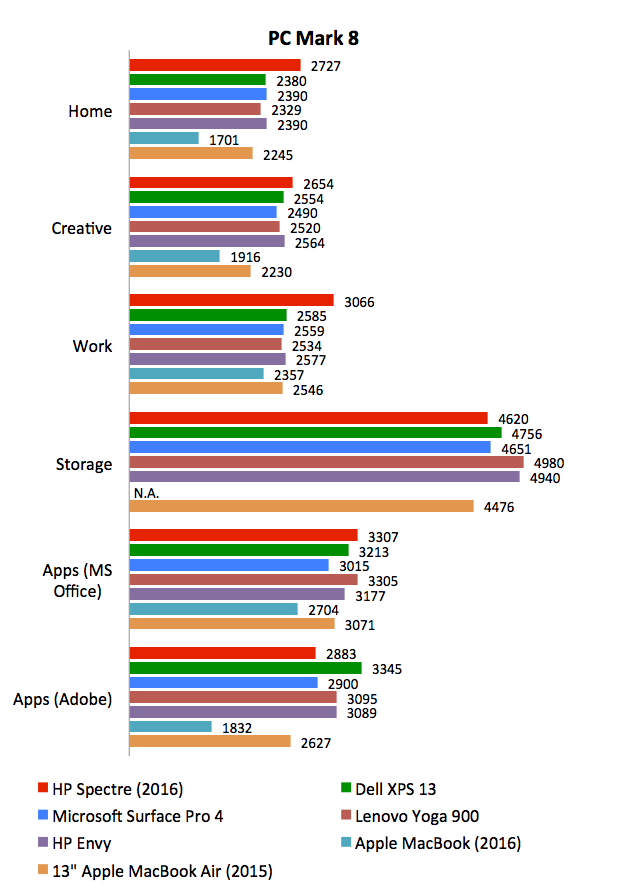 The Spectre has the same Intel HD Graphics 520 integrated GPU as its closest competitors so their 3DMark scores are quite similar. However, notice that its score on the more intensive Fire Strike scenario is lower than expected. Here, it managed just 696, while other comparable notebooks like the Dell XPS 13, Microsoft Surface Pro 4, and even the older MacBook Air, managed at least 850 points. A possible explanation could be its cooling system is not quite as good as its competitors, which wouldn’t be out of the ordinary since it has to use smaller fans to accommodate its smaller dimensions. 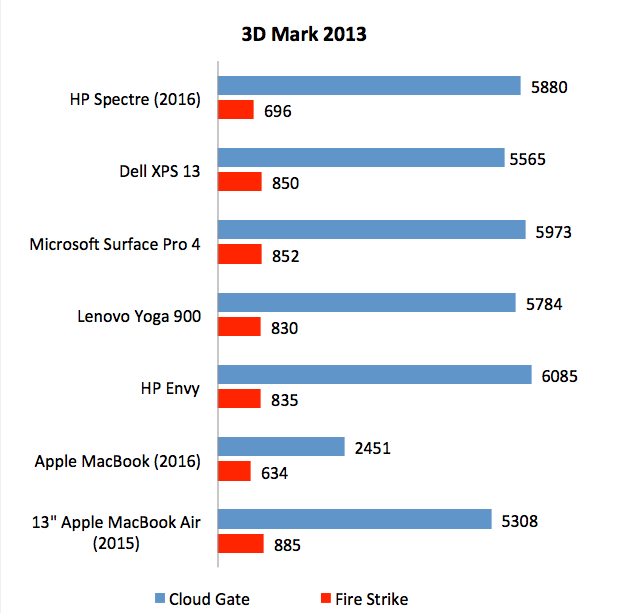 The latest integrated Intel GPUs are quite capable of light gaming and the HP Spectre was able to run Far Cry 2 quite comfortably at Full HD resolution at frame rates of above 30fps. That’s quite an achievement, even if Far Cry 2 is a really old game. The Spectre seems to be slightly weaker than its rivals in the graphics section, because I noticed that it was marginally slower, especially on the more demanding “Very High” settings. 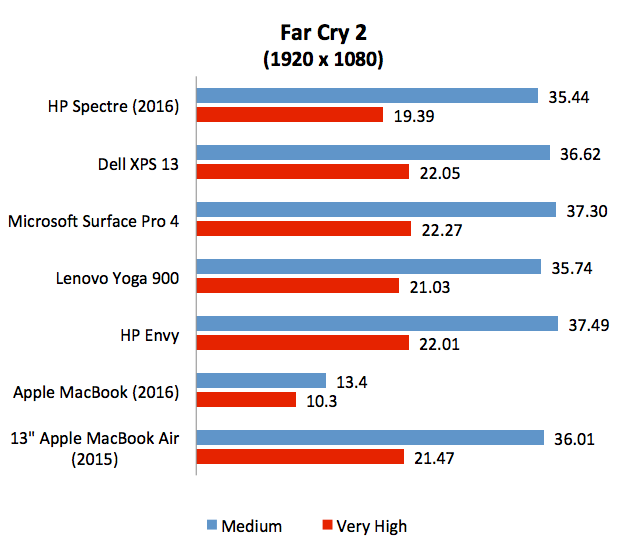 It was the same story on Tomb Raider, the HP Spectre once again seemed to be lagging a little behind its rivals when it came to graphics performance. To be sure, the difference isn’t all that much, but it’s definitely appreciable. Even though it has the same Intel HD Graphics 520 integrated GPU as its rivals, its score on the more demanding “High” settings is almost 9% slower than its closest competitor. 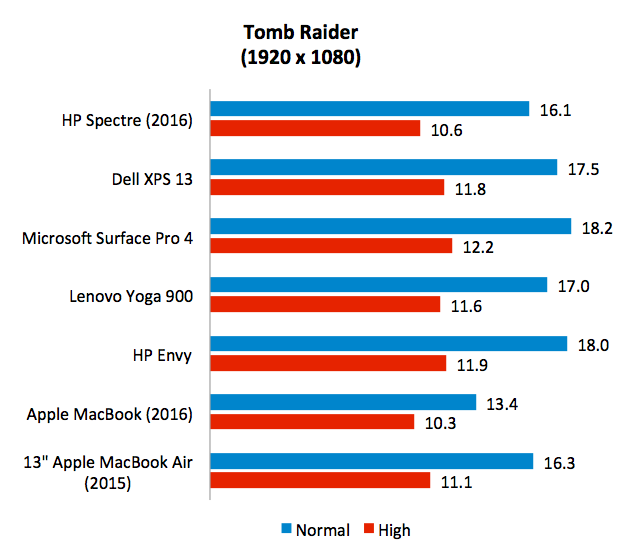 There’s no other way to put, the HP Spectre’s battery life is disappointing. It managed just 2 hours and 51 minutes, nearly half an hour less than the Microsoft Surface Pro 4 and over an hour less than Dell XPS 13 and Lenovo Yoga 900. In fact, it’s nearly half of last year’s MacBook Air, which had a less efficient Broadwell processor.

Granted, it doesn’t have the largest battery. At 45Whr, the Spectre’s battery is only larger than the Surface Pro 4 and the MacBook, but this is no excuse for such a short battery life. Looking at the power consumption figures, we can see that the Spectre recorded the highest power draw, which no doubt contributed to its poor battery life showing. 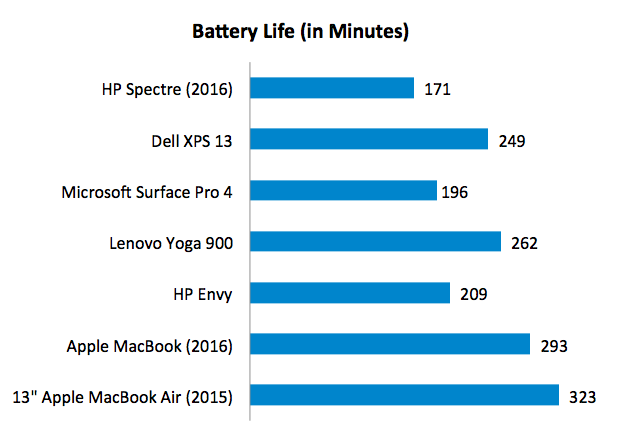 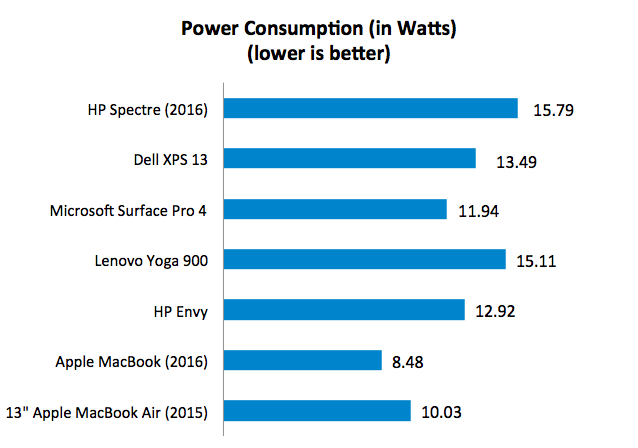 Our portability index attempts to provide an objective measure of how portable the different ultrabooks are relative to each other by taking into account things like size, weight, and battery life. And in this benchmark, the MacBook reigns supreme with a score of 7.351 points - nearly double that of the second-placed Microsoft Surface Pro 4. Here, we can see that even though the HP Spectre is remarkably thin and light, its overall portability score was hampered by its poor battery life. In light of that, it might actually make more sense to carry a slightly heavier notebook like the Dell XPS 13, which provides significantly longer battery life. 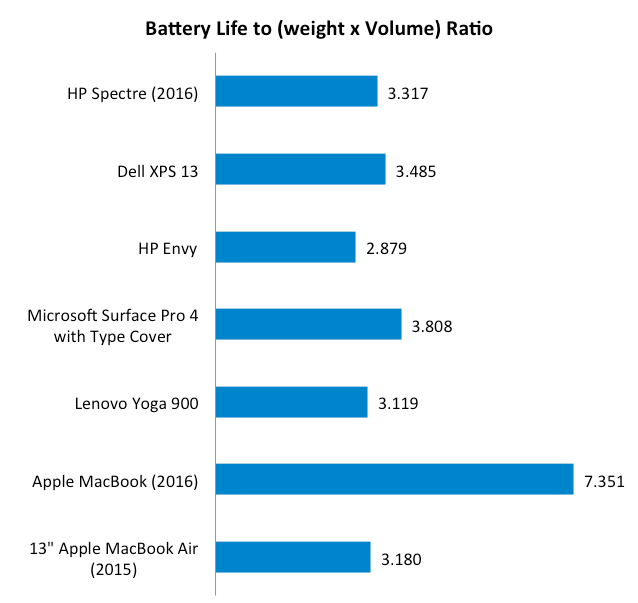