Pretty, but with some compromises

And I mentioned at the start of this review, there’s never been a better time to be a notebook user, and the short version of the conclusion here is that the HP Spectre is a great notebook that successfully combines style with performance, but with some caveats.

Let’s start with the caveats. The one that most users will be concerned about is probably battery life. In my tests, I found it to be significantly shorter than its rivals. That said, our battery test suite is pretty intensive and consists of intensive graphics workloads and gaming that drain batteries quickly. Users will certainly be able to get more out of the Spectre if their intended use is for lighter tasks such as browsing the web, reading and composing emails, watching videos, and typing documents.

The other thing users will need to take note of is the ports. The Spectre comes with three USB Type-C ports, which although fairly plentiful, does still mean that adapters will be required for connecting to non-Type-C peripherals - at least for the time being and foreseeable future. Though USB Type-C peripherals are soon coming to the market, they are still fair from mainstream. So if you want to plug in an external hard disk drive or even your favorite wired mouse, you’ll need adapters to do it. Most glaring of all, however, is the lack of an SD card reader. This will definitely frustrate photography enthusiasts and only serves to highlight just how important adapters are if you wish to connect any sort of peripheral to the Spectre.

Apart from these issues, there’s really not much else to nitpick about the Spectre. We really like its looks and appreciate its compactness and portability. It’s one of the most compact 13-inch notebooks I have ever carried out and I think it gives the excellent XPS 13 a run for its money. The display, though not of a high resolution, is plenty bright and sharp too. It also performs decently, and, in the real world, will run just as quick as any of its rivals. 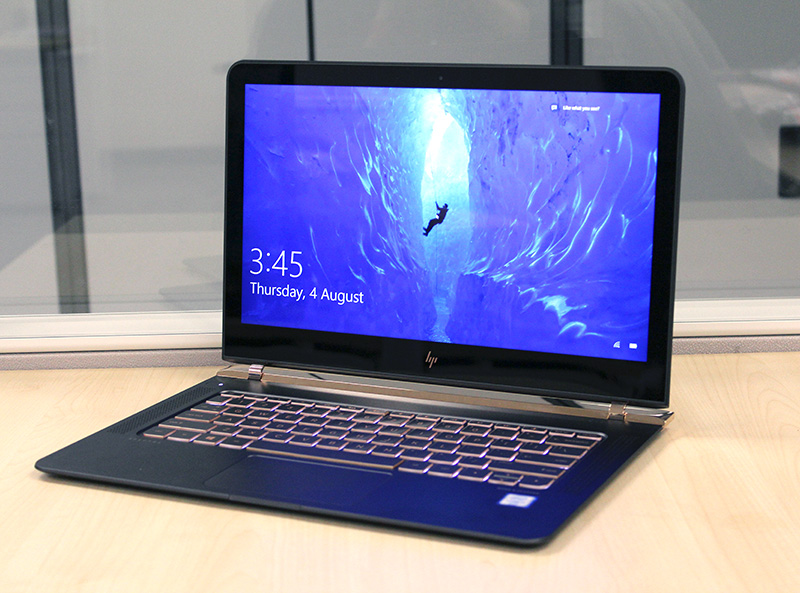 In terms of price, be prepared to pay a little premium for the Spectre’s good looks. The model that I tested with the faster Core i7-6500U processor and larger 512GB PCIe-based SSD comes in at S$2,599. Compared to its competitors, a similarly spec’ed Dell XPS 13 and Lenovo Yoga 900 are both cheaper at S$2,299, but they have smaller 256GB SSDs. And for the same money, you’ll get a slightly more powerful Lenovo Yoga 900 with the Intel Core i7-6560U that has a better integrated GPU and more RAM (16GB). But it isn’t so bad really, and you’ll soon forget how much you spent once you notice passers-by checking out your new Spectre the next time you show it off at Starbucks.

In closing, the HP’s newest Spectre is a moderate success at marrying form and function. It’s really pretty and compact, but sacrifices a bit of practicality in its less than stellar battery life and poor selection of I/O ports. But if those niggles don’t bother you and all you want a supremely beautiful and compact notebook, the Spectre is hard to beat.