HP's Pavilion dm1 is a netbook that delivers on the performance front, though given its size, we're hesitant to call it that. Running on the AMD Brazos platform, this netbook is a pretty decent example of what you can expect from such devices now and in the future. Back in the days of the first netbook, these devices were underpowered and lacked graphical capabilities, even to the extent of being unable to play Adobe Flash videos.

Since then, thanks to Intel's Atom processors, netbooks have come a long way. AMD's Brazos platform has upped the ante with much better graphical performance compared to the Intel Atom while being relatively competitive on the TDP requirements. Netbooks on the Brazos platform like the HP dm1 have enough juice to match Atom based netbooks while allowing you to play some games (at the lower settings).

The overall design of the HP dm1 borrows much from the Envy line. Its sleek, thin profile works in its favor of this slightly larger than normal netbook. That's a good thing too, because a larger screen does make for easier reading, and a bigger keyboard means more comfort for your fingers. Having said that, the dm1 isn't perfect. While it looks thin with a competitive weight, the distribution of that 1.53kg weight means it's not that easy to carry with just your fingers alone (as we found out).

It does score highly in the price department. The HP dm1 retails at an affordable starting price of S$699*, which positions it nicely against some of the higher end netbooks while offering so much more. 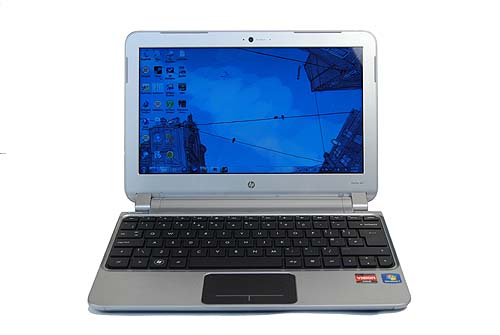