Designed to be a stunner

While we'd like to come right out and say we're not thrilled by the HP Omen, that would be an outright lie. Apart from its middling performance expected from its hardware choices, the design and effort gone into constructing the HP Omen was something that really took us by surprise. We really didn't think a S$2,299 notebook could feel and look so good. We expected a cheap plastic bulky chassis, not the sleek and svelte build the HP Omen turned up in. Only the Gigabyte Aorus X7 Pro could somewhat compete aesthetically, but it doesn't better HP Omen's level of design details and it costs a whole lot more at S$3,999.

The fact that HP went one step further and made the HP Omen out of quality materials is a testament to how focused the company is on aesthetics and build to differentiate itself from everything else in the market. While the MSI GS60 2PE Ghost Pro is lighter, it doesn't look as good as the HP Omen. The fact that the HP Omen is so thin belies the fact that the machine is very sturdy and oozes of quality. While the display has a slight wobble to it, the base is very solid and firmly grounded. What we're basically saying is that HP's nailed the design, quality and all the physical characteristics of the HP Omen.

In fact, the machine's excellent build quality even extends to the touchscreen. There hasn't been a gaming notebook with a touchscreen in recent memory and HP's decision to pack one in with the HP Omen is a good choice. We concede that there aren't a lot of great touchscreen games, but having a touchscreen for other uses far outweighs its limited functionality in the gaming scene. Its always great having input choices since Windows 8 is built from the ground up to take advantage of touchscreens, there's really no downside to having one on the HP Omen. In fact, you only stand to gain in notebook functionality with Windows 8 and its apps in mind. 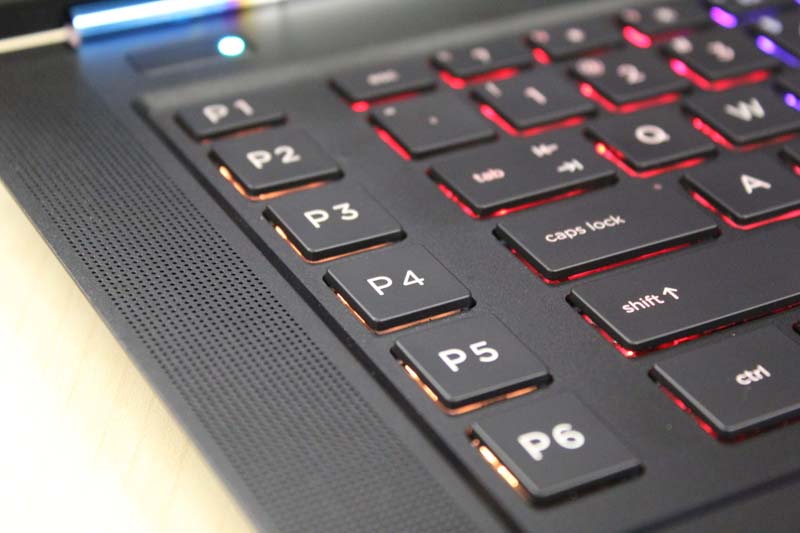 We'd also like to highlight the keyboard. While it's a generic chiclet keyboard, the presence of shortcut keys is a welcome addition (though we really didn't use them). Still, at least it's there as an option for gamers who want to customize their experience and we have to give HP props for that. Speaking of the keyboard, we also love the backlight options that HP has given its users. HP's got a ton of customization options, with the keyboard alone having three separate sections for coloration. Even the sides and power button lights can be customized to any color you want and that's impressive.

Speaking of choice, HP also gives its customers a choice on which version of the HP Omen they'd like to have based on their usage needs. We've listed both models and their specifications below.

The HP Omen does get a lot of things right, but that doesn't mean it doesn't have its share of faults. The battery life is rather lacklustre, lasting around 98 minutes in our benchmarks. That's not much of an issue if you often have access to a power outlet, or you don't intend to game outside of your home, friend's place or a LAN gaming center. However the main concern with the HP Omen is that it uses the NVIDIA GeForce GTX 860M GPU. It's an outgoing discrete graphics chip and its inclusion in the HP Omen is a rather puzzling decision, especially since even the higher specced model uses it. Despite that, the NVIDIA GeForce GTX 860M in the HP Omen still has some teeth. True, it may not run today's intensive games on the highest settings, but it can still deliver reasonable gaming performance in most games as long as you don't set the graphical quality too high.

Looking at it from the MSI GS60 2PE Ghost Pro's perspective, the HP Omen isn't outmatched as you'd expect, especially the cheaper model (the one we're reviewing). Considering that the MSI GS60 2PE costs S$3,199, the S$2,299 asking price of the HP Omen isn't that bad. It's safe to say that the HP Is a decent alternative to the MSI GS60 2PE Ghost Pro, if you're willing to trade a bit on performance. At the very least, the HP Omen gives premium ultrabooks a run for their money where design and aesthetics are concerned. The Lenovo Yoga 3 Pro (the base model) for example, is the same price as the HP Omen at S$2,299. This puts the HP Omen in a very enviable position, as it can be considered as a gaming-capable premium ultrabook of sorts. Of course the HP Omen is still a much larger machine with a 15.6-inch screen, but its steep angular design does help pass it off as an ultrabook in certain respects (minus the expected battery life).

HP also offers the Omen with higher specifications with the main differences being 16GB of RAM and 512GB of PCIe-based SSD storage, but at a much higher price of S$3,399. Our recommendation is to skip this model as it is priced much too high. The additional 8GB of RAM will do nothing for gaming performance and will also have no bearing on performance unless you intend to run many intensive applications at once or multiple virtual machines. The larger 512GB PCIe-based SSD is much welcomed since the standard 128GB SATA-based SSD is a bit limited in storage, but the premium HP charges does not make financial sense. It's much more economical to get a separate external hard disk drive for added storage.

All things considered, the HP Omen is a decent first attempt at the gaming market. Its high build quality and attractive design should sit well with the target audience, but unfortunately, it is letdown by its choice of GPU used and less than ideal power consumption. All said and done, the HP Omen makes for a very premium gaming-grade 'ultrabook' for either mainstream users or for gamers who value design and aesthetics over cutting-edge hardware. Now if only the base HP Omen comes fitted with a 256GB SATA SSD, it would be more palatable for its asking price and improve the notebook's usability as games do gobble up space quickly these days.