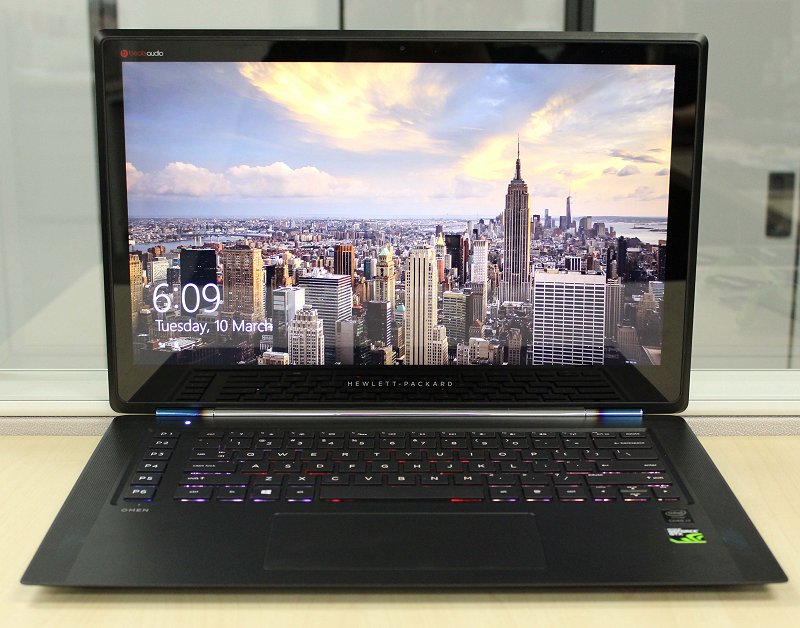 In the past year or so, we have seen a resurgence in gaming notebooks and just about every major PC manufacturer has its own line of specialized gaming notebooks now. Dell has their Alienware line, ASUS has their ROG line and now, HP has their Omen. Of course, the moniker Omen isn't exactly new. Parallel to Dell's purchase of Alienware, HP too purchased a custom premium gaming PC manufacturer called VoodooPC. And back in the day, VoodooPC had a desktop PC called the Omen. While the new Omen isn't a desktop, the fact that HP is using the same name suggests that they're banking on brand recognition, which means that the Omen line is back in business. Will it stick around long enough to be a major contender or will its first outing be its last?

The new Omen is nothing like its distant desktop ancestor. It's a sleek black gaming laptop, with smooth edges and a very angular design. Its 15.6-inch Full HD (1,920 x 1,080 pixels resolution) IPS display packs a hidden surprise for gaming notebooks; it's a touchscreen, which is a rarity among gaming machines. In fact, it's the first gaming laptop we've reviewed this year that has a touchscreen. It's running on Windows 8.1 and under the hood, the HP Omen is powered by a NVIDIA GeForce GTX 860M with 2GB GDDR5 of framebuffer, with an Intel Core i7-4710 processor (2.5GHz, 6MB cache), 8 GB RAM and 128GB SATA SSD storage. The HP Omen also uses a Intel Dual-Band Wireless AC7260 card (2x2) for Wi-Fi connectivity, as well as Bluetooth 4.0.

On the audio side of things, it has two Beats Audio speakers, set into the base on the left and right though we felt the performance from them was a bit lacking, with tinny sound and unsatisfying bass when we tried the new Battlefield Hardline beta on the machine. 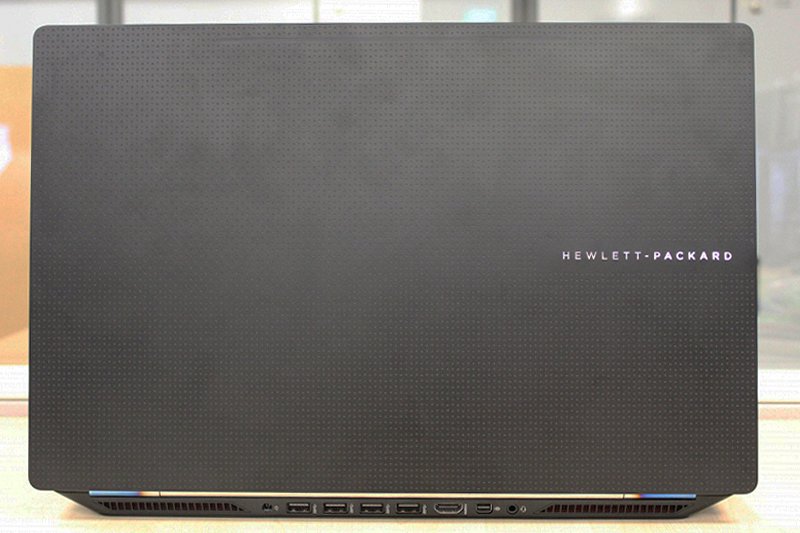 Unlike most notebooks, which go for a smooth finish, the HP Omen's is textured with teeny squares, to give it a bumpy texture as you run your hand over it.The bumpy texture also makes it easier to grip, with the added benefit of making it look unique. The HP Omen's not a large machine either as you would normally associate with gaming notebooks. In fact, it looks more like an Ultrabook than a hardcore gaming machine. It measures just under 2cm thick, and comes in at 2.19kg. Though it is slightly slightly heavier than the sub-2kg MSI GS60 2PE Ghost Pro, we can forgive it because its entire chassis is crafted out of aluminum. As a result of this, it feels extremely solid and has a premium feel that is unmatched by its rivals.

We've said in numerous reviews that we would prefer our USB ports to be at the sides for easy access. Imagine our horror when we saw that all the ports on the HP Omen were at the back. We figured that it was because of the aggressively slanted side profile design which made installation of ports at the sides rather hard, if not outright impossible. Given the notebook's priority in having a great design, we concede that HP probably made the best out of the situation but it still annoyed us that we had to completely turn the machine around (or fumble blindly for the ports at the rear) every single time we wanted to to plug in (or out) a USB device. Despite the annoyance, this decision has enabled HP to design a really swell looking product that has a very uniform appearance at most angles.

If there's one thing the HP Omen does very well, it's the aesthetics. The stylish (and subdued) red lighting that emanates from its rear exhausts is a far cry from the garish lighting on some of the notebooks we've reviewed. The metal bar that serves as a hinge is also unique in that its sides are discolored, reminding us of the burnt titanium exhaust tips that is often seen on high-end aftermarket exhaust systems for exotic supercars. Petrolheads are sure to love this detail. 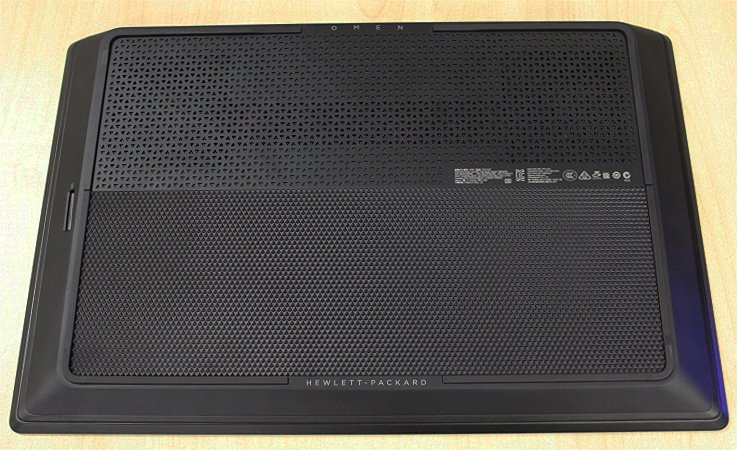 The textured scheme HP has going for it even extends underneath the notebook. Despite there being no reason for anybody to look underneath (the HP Omen isn't upgradable), HP still went ahead and designed a great looking shell all around. Here's a close look at the texture in case anybody is curious:- 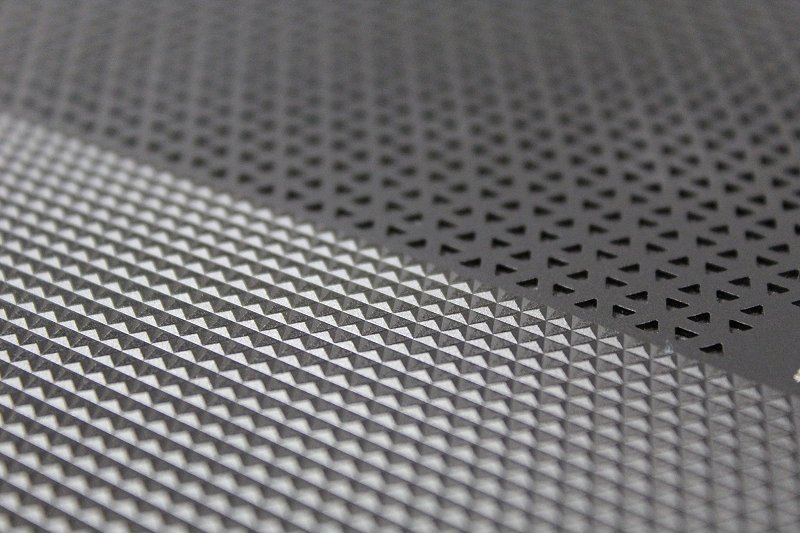 Like nearly every other recent gaming notebook in the market, the HP Omen uses a conventional chiclet keyboard, with the usual array of keys, though it lacks a numpad. The keyboard is set in a depression in the chassis, though we didn't notice much (if any) difference from a regular chiclet keyboard. As such, it shares the downfall of all chiclet mobile keyboards, namely they're too shallow and aren't great for typing or gaming. The notebook also has shortcut keys at the sides which are customizable, similar to the the designs found on the Aorus or Gigabyte machines. 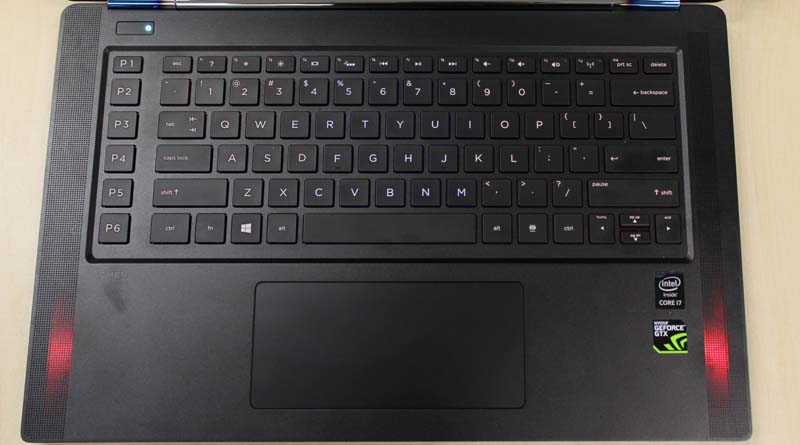 HP's machine has one of the more robust customization suites we've ever seen for a notebook. You can customize the colors of the keyboard backlights (which are divided into various sections), but you can also customize other lighting options such as the power button and the speakers with any color you want. All of this is done with an intuitive software that just has you clicking your preferred color and its location. 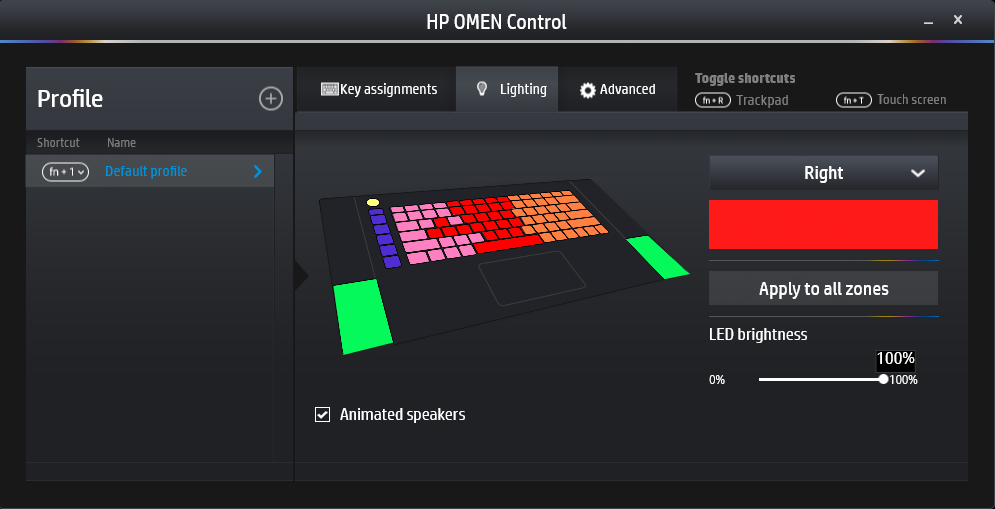 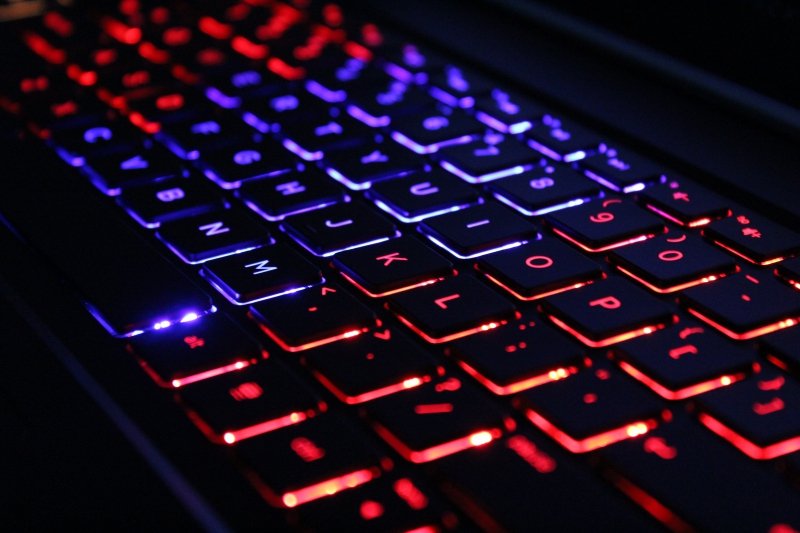 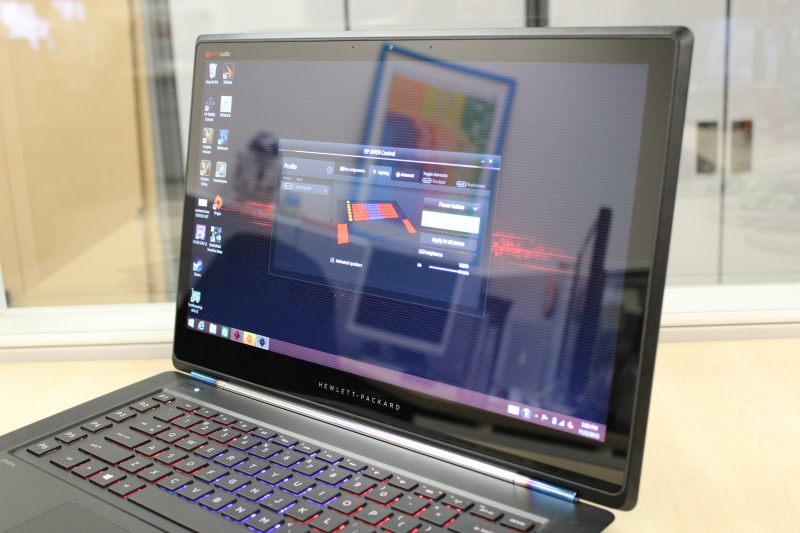 The HP Omen is the first gaming notebook we've reviewed this year that has a touchscreen display. It's a glossy Full HD screen, and though it may look nice for its vibrant reproduction, viewing angles can be a tricky as the reflections can seriously mess up what the screen is showing. Luckily, that's the only visual issue you might have with the display. If you're using its touchscreen to quickly execute certain functions, the display is rather smudge resistant and it took a few hours of repeated usage before we noticed smudge buildup.

It's nice that HP is willing to provide options. For those using wired connections, HP bundles an Ethernet adapter free with the Omen. Size considerations means they had to nix having a built-in Ethernet port but with the adapter, those using wired connections aren't left high and dry. Nevertheless, it still means one less USB port if it's used. So for users who rely on many USB devices, this could be a concern depending on your usage.

Now that we've seen how the HP Omen looks and what it brings to the table, our next section will put it to the test and see how its hardware stacks up.