Due to the rise of smartphones and tablets, sales of traditional desktop and mobile computing devices have suffered of late. The reaction by Microsoft and its PC partners is to integrate touch into their devices, thinking that that alone will suffice and draw users back to desktop and notebook machines. Unfortunately, touch as a means of interfacing with such machines have not quite caught on. This is evident judging from public reaction to Windows 8, an OS that was designed from ground up to be more touch-friendly. Users still prefer the trusty keyboard and mouse.

The Recline 27 attempts to change this by offering users a new way of using their AIO, thanks to a cleverly engineered stand. However, we have mixed reactions about their attempt. On one hand, it did bring the display closer to users, effectively turning the Recline 27 into a giant tablet, and that made it quite fun to use. Unfortunately, the highly reflective glossy screen is distracting and and makes it very hard to see what’s on the screen.

On the flip side, the Recline 27 does offer plenty performance, thanks to the powerful Core i7-4770T processor and generous amount of RAM. Results on general computing scenarios such as "Home" and "Work" were amongst the highest and this was reflected in our own usage as well. The Recline 27 has plenty of juice for tasks like word processing, web browsing and even other compute-intensive productivity and creativity tasks like video editing and encoding. 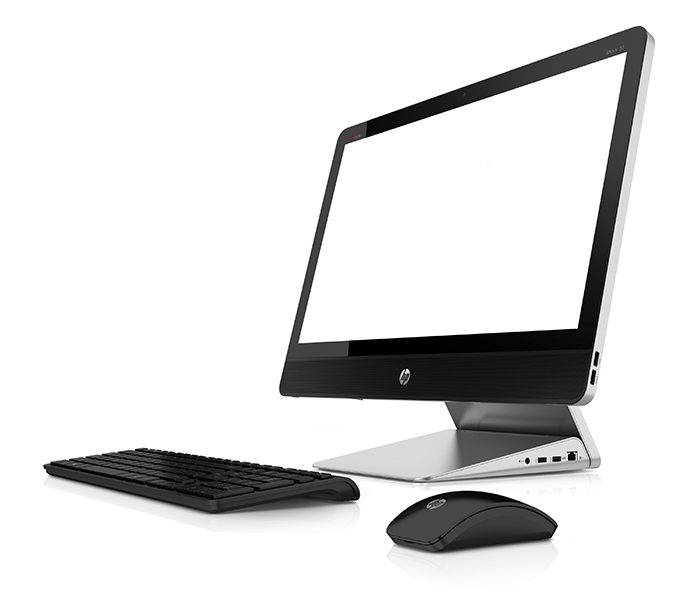 Given that the Recline 27 is powered by a very basic GeForce GT 730A, it was not surprising that graphics performance was disappointing. Clearly it lacked the horsepower required to run newer games such as Tomb Raider at its native resolution. Further to that, this also hampered its ability to excel in some of the content creation tasks in our PCMark 8 test suites that tapped on the graphics horsepower. Clearly, the Recline 27 has an excellent processing platform that's letdown by a basic GPU. No doubt it's better than integrated graphics on the CPU, but HP could have offered a better balance.

We also noted that the Recline 27 lacked certain features found on other more multimedia-oriented AIOs such as a Blu-ray drive and integrated TV tuner. We think such features would greatly complement an AIO, as it is most suited for media consumption. The Recline 27 is also somewhat lacking in the audio department and the fact that there's no audio line-out facility on the AIO also counts against upgrading its audio subsystem with better speaker solutions. You could use the headphones output jack if required, but that's not the as good as a proper non-amplified audio output jack. While the AIO seems to support a standalone subwoofer to extend the reproduction of lower frequencies via a dedicated audio jack, it was designed with HP's optional accessory upgrade in mind (which is unfortunately not offered locally). You may still source for your own subwoofer that uses such an input, but the options are limited in the PC speakers department.

As a result, we found the Recline 27’s asking price of S$2499 to be a tad on the high side. While it might be cheaper than Lenovo's 27-inch IdeaCentre Horizon and IdeaCentre A720 (both cost around S$2700 - S$2800), those machines were more multimedia-oriented and had the goods and features to back them up. The IdeaCentre Horizon had a unique multi-mode cart, gaming accessories and a built-in battery, while the IdeaCentre A720 came with a Blu-ray player and integrated TV tuner. Meanwhile, the ASUS AIO machines we've compared each come with their own strong suite of features that make them functional and versatile. The Recline 27's performance might be above average in some scenarios and it has a really well engineered stand, but the “below the desk typing” mode that HP promotes is let down by its highly glossy and reflective screen. In addition, as mentioned in the earlier paragraph, it lacks multimedia-centric features that would have made it a more useful and functional media consumption system.

Despite our judgment, we encourage you to try out its flexible stand and hinge at retail stores to see if its "below the desk typing" mode and much closer screen interaction are enough pull factors for your usage needs. There are several AIO models that offer a lie-flat usage, but HP's Recline 27 is the first to do that and the above mentioned usage mode.