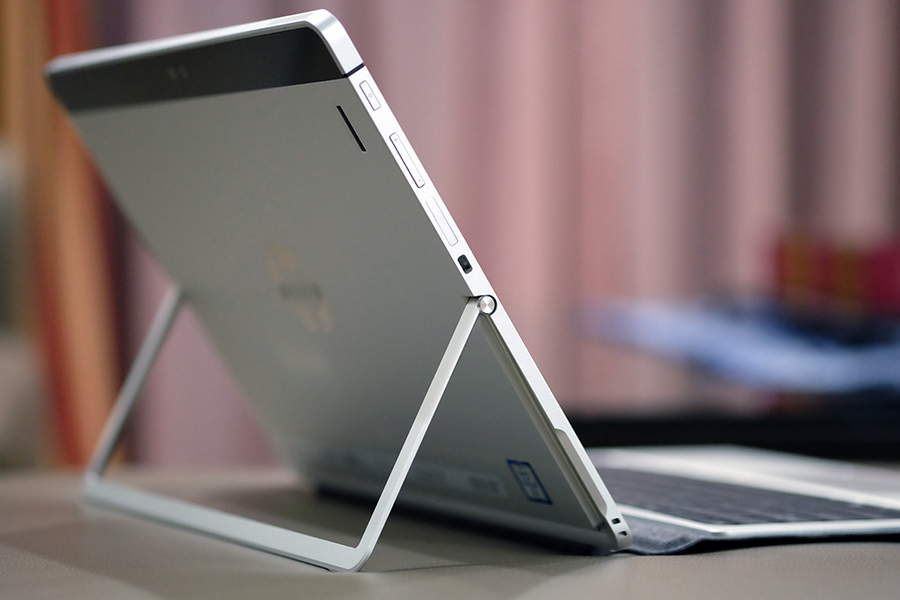 If anything, Microsoft’s Surface hybrids have been a resounding triumph. First conceived as a way to spur other hardware manufacturers into creating sleeker and more innovative Windows devices, the success of the Surface Pro 3 has spawned quite a legion of competitors. From tablets imitating laptops to laptops that attempt to emulate the reading convenience of a hand-held slate – yes, there’s a difference; the iPad Pro falls into the former category while the Surface Pro 4 slides into the latter – there’s no shortage of devices that want to offer you the best of both worlds.

And given that a growing proportion of workers don’t necessarily do all their work while chained to an office desk, it appears as if there’s a niche for the 2-in-1 hybrid in the business space. As it turns out, that’s a gap the very first Elite x2 from HP wanted to fill in 2014. But as we noted in our hands-on with the second-generation Elite x2, the first-generation device wasn’t exactly the definition of elegance. Fortunately, the new Elite x2 1012 G1 turns things around quite effectively by ditching the old design and taking lessons from HP’s consumer products.

The Elite x2 may not turn heads quite like the HP Spectre or Dell XPS 13 do, but it’s already quite remarkable that a business device looks as good as it does, or rather, so similar to the Spectre x2 from its consumer line-up.

But does it deliver the goods in substance as well as form? That’s what we’re going to find out. 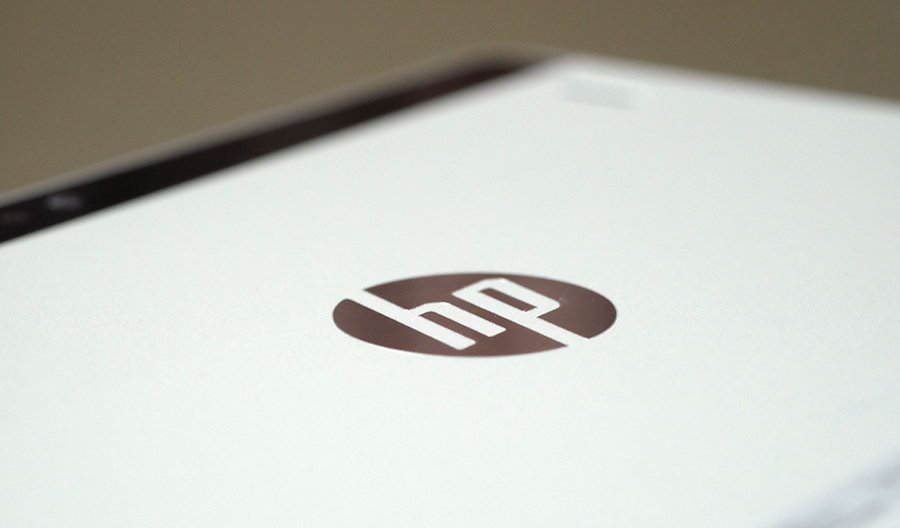 The Elite x2 is available in a variety of configurations, but HP sent us what may be the highest-end model for review, which means a dual-core Intel Core m7-6Y75 vPro processor (1.2GHz, 4MB cache) with Intel HD Graphics 515, 8GB of 1,866MHz LPDDR3 RAM, and a 512GB SanDisk M.2 SATA SSD.

The Skylake Intel Core M processors are an upgrade over the initial Core M processors, but it still allows manufacturers to cool it passively. As a result, the Elite x2 sports a fanless design and is exceedingly quiet.

Everything has been calculated to minimize power consumption as much as possible, most notably the power-sipping Intel Core m7 chip with its 4.5 watt TDP and the LPDDR3 memory, which consumes significantly less power in standby than even DDR3L RAM. Business users who are frequently on the move need their notebook to last throughout the day without worrying about being near a power point, and it looks like HP has taken this consideration to heart.

It’s also worth noting that there are actually quite a few storage options available to customers. The base storage configuration starts out with a 128GB SATA M.2 SSD, but users can opt for up to a 512GB SATA M.2 SSD (similar to our review model) or even up to a 256GB M.2 PCIe NVMe SSD if they wish. Compared to a SATA-based drive, PCIe SSDs can take advantage of the higher bandwidth available over the PCIe protocol, which means faster transfer speeds. However, we don’t think that this will make a noticeable difference in day-to-day usage, unless you’re going to be performing file transfers regularly to external drives.

In addition, a third storage type is available in the form of a 180GB or 256GB M.2 SATA self-encrypting OPAL2 SSD. These drives have integrated hardware encryption, so performance isn’t affected at all. Furthermore, because the security of self-encrypting drives is not dependent on the integrity of the operating system, they are also protected from software attacks on the OS or BIOS.

However, we think that most customers will probably be happy with either the regular SATA drives or the PCIe ones, unless they need even tougher security to comply with their company’s requirements. 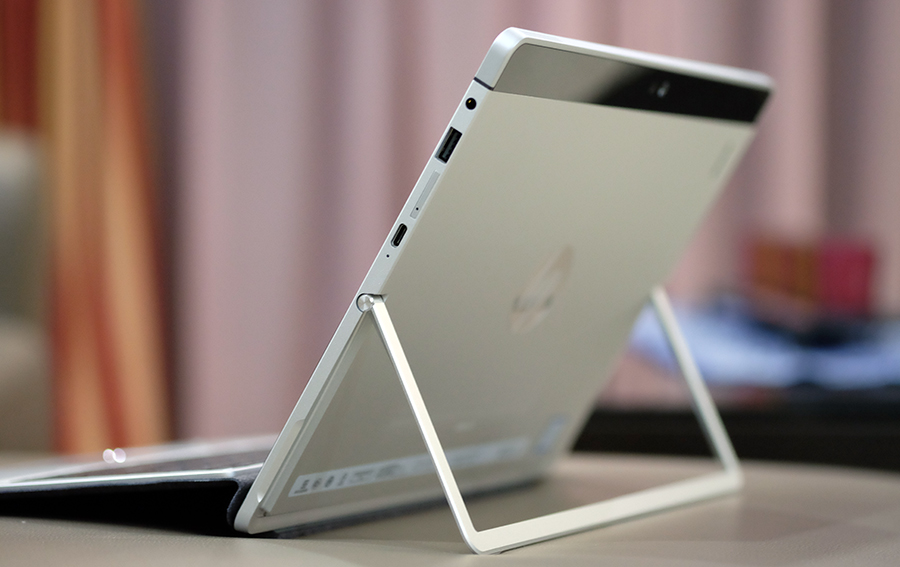 One of the things you’ll notice upon picking up the Elite x2 is how good it feels in the hand. It is solidly constructed, thanks to its magnesium alloy body that leaves no doubt in your mind that this is a really well-built device that will stand up to, well, all the meetings and Starbucks outlets you take it to. And speaking of build quality, the Elite x2 has actually passed through MIL-STD 810G testing, which subject it to things like challenging temperature, humidity, and drop tests. This doesn’t mean that this is a ruggedized notebook fit for a war zone, but it does mean that it should be more than capable of withstanding whatever your intrepid work life throws at it.

However, we aren’t big fans of the glossy HP logo and strip of glass at the back. Both are quite big fingerprint magnets, and you’ll find yourself wiping them down regularly if smudges horrify you the way they do us.

Together with the HP Travel keyboard, our version of the Elite x2 weighs around 1,209g (the weight varies by configuration). That’s a tad bit heavier than, say, the Microsoft Surface Pro 4 and its Type Cover keyboard, which tip the scales at 1,078g. We’re not going to quibble over small differences in weight like that, but the difference is probably more noticeable when you use the Elite x2 as a tablet (it weighs 824g, versus the Surface Pro 4’s 786g).

It’s also pretty thin, at just 8.05mm. HP told us that it deliberately made the kickstand hollow, instead of going for a single solid piece as on the Surface Pro 4, because the U-shaped design allows it to sit flush against the tablet’s back without adding any unnecessary thickness. In addition, the kickstand sports a friction hinge much like the Surface Pro 4, which offers the full range of movement instead of limiting you to a few fixed positions. 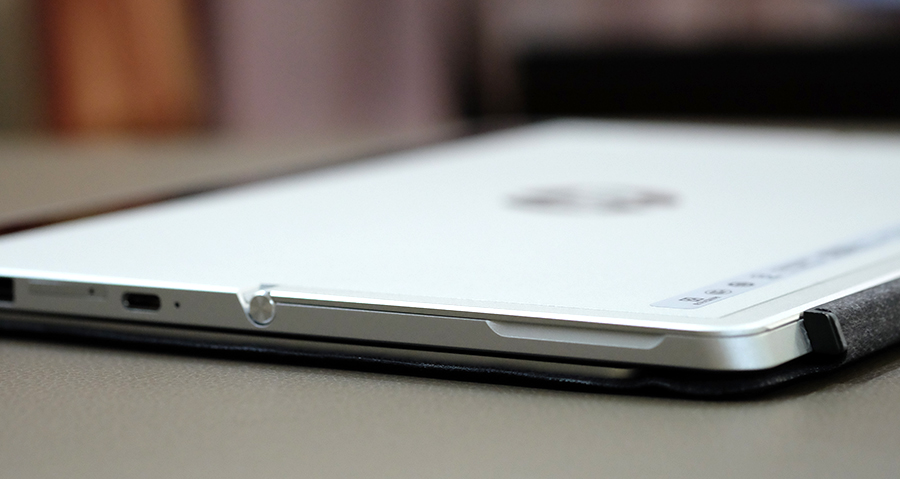 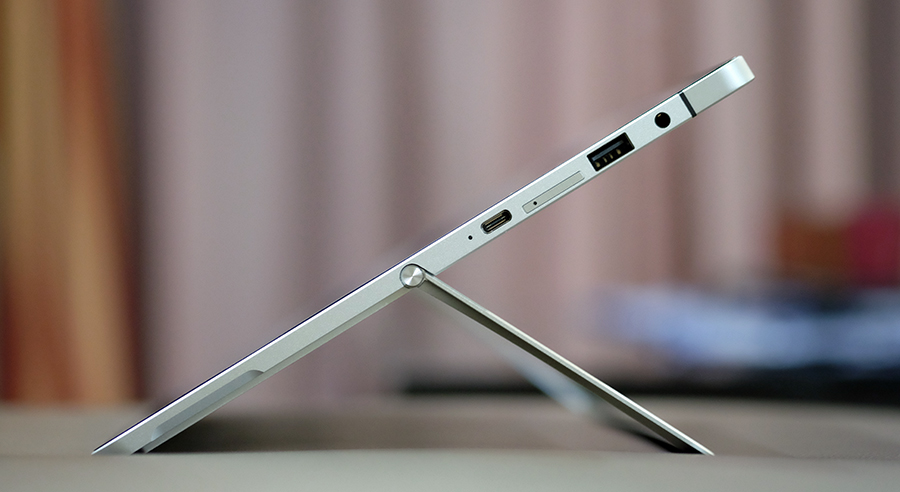 When it comes to connectivity options, the Elite x2 has all you’d expect on a svelte 2-in-1 hybrid. A particularly nice touch is how charging is now carried out over a USB Type-C port, which also doubles as a Thunderbolt 3 connector. This means up to 40Gb/s of bandwidth and high-speed data transfers, and even the ability to daisy-chain up to two 4K displays at 60Hz. There may not be any dedicated display outputs here, but the Thunderbolt 3 port takes care of that (although you may want to make sure you have the right adapters on hand).

In addition, there is a USB 3.0 Type-A port on the right edge as well, for convenient access to the vast majority of USB devices and peripherals. On this side of the tablet, you can also find the 3.5mm headphone jack and a microSD card slot that supports up to 200GB of expandable storage. 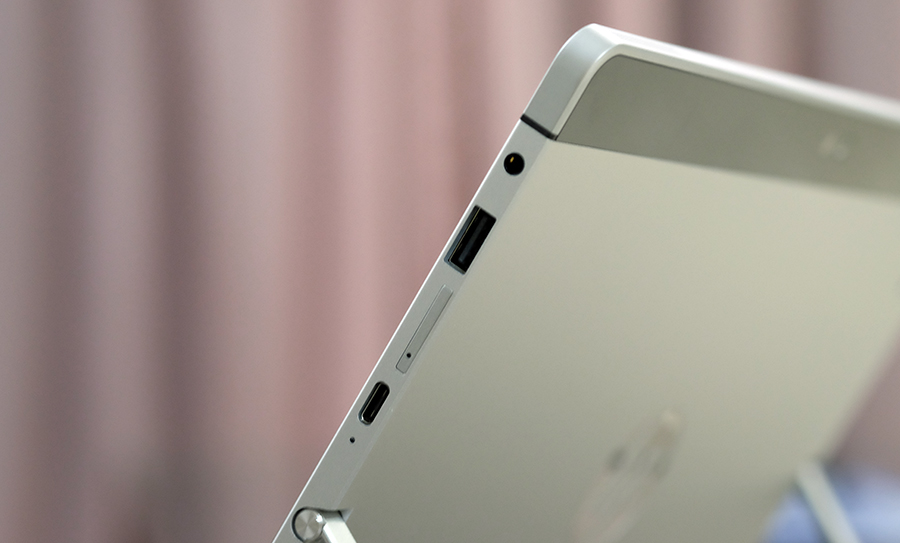 The power button and volume rocker are located on the other side of the tablet. There’s also a dummy slot on our unit where the micro-SIM slot would be. HP allows you to order the Elite x2 with a Qualcomm Snapdragon X5 LTE modem, which means you would be able to get connected even without a wireless hotspot in range. We can see how that would come in handy for power users, but for most people, Wi-Fi will probably suffice.

The Elite x2 uses a 2x2 Intel Dual Band Wireless-AC 7260 wireless chip, which theoretically supports speeds up to 867Mbp over two spatial streams. That puts it in line with its competitors, but unfortunately still means that you’re not going to be able to take full advantage of the current crop of Wireless AC1900 routers. It also supports Bluetooth 4.2, which is required for pairing with the bundled HP Active Pen (more on that in the next section).

But hardware and build quality aside, the other important factor when deciding on a notebook would be its display. Unfortunately, this is probably the one aspect of the device where its business roots might set it back among customers looking for a notebook for both work and entertainment. The Elite x2 packs a 12-inch 1,920 x 1,280-pixel (192ppi) touchscreen display, with a sheet of Corning Gorilla Glass 4 directly bonded to it. While it’s not a bad display by any means, it simply cannot hold a candle to the Microsoft Surface Pro 4, especially when the two are set side by side. 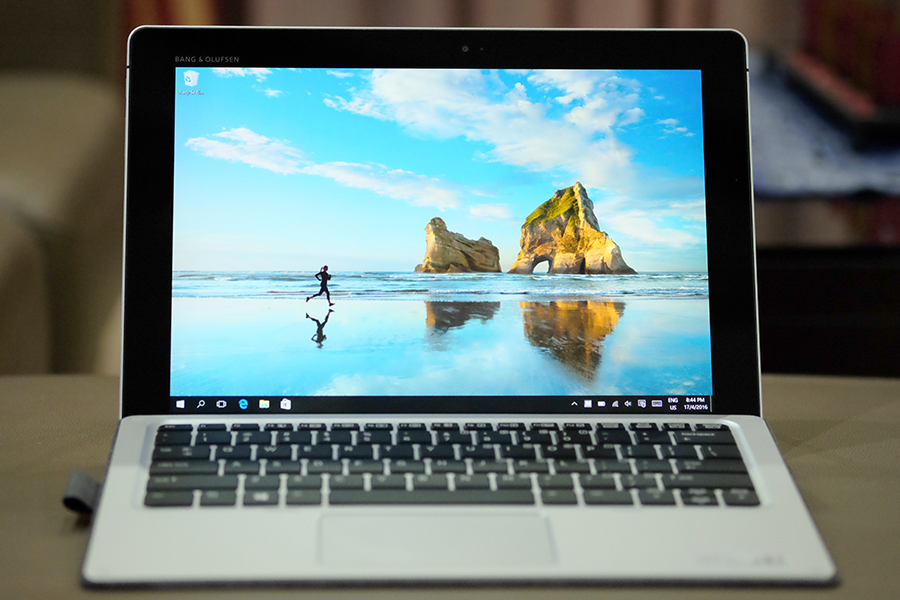 The Surface Pro 4’s 12.3-inch 2,736 x 1,824-pixel (267ppi) PixelSense display is just crisper and capable of more vibrant color reproduction, and its thinner bezels are just more pleasing to the eye. Another difference between the two displays is their out-of-the-box color temperature – when set to display a blank white canvas in Microsoft OneNote, the Elite x2 had cooler, more bluish tint to it, whereas the Surface Pro 4 has a warmer, more yellow hue.

With that said, HP likely went with the lower resolution display because of the priorities of its customers. The Elite x2 is primarily a business device, which means that its users are probably going to be happy with a good enough screen that allows for easy viewing of documents – all hail the 3:2 aspect ratio – and won’t throw a fit just because movies and pictures appear less sharp. Furthermore, a higher resolution display translates into a heavier drain on the battery, and a highly portable notebook with bad battery life is just a dud, and even more so if your target audience is working professionals.

Built for the enterprise

After all that discussion about the Elite x2’s design chops and its specifications, it’s easy to forget its underlying enterprise DNA. This is still a business device at heart, which is why HP has included a range of security-oriented features for working professionals.

For instance, there’s an option for a fingerprint reader on the back of the tablet. We were able to set up a fingerprint log-in quickly enough, and the reader proved quite reliable in signing us in. It’s also quite conveniently positioned, and we were able to get used to it with little hassle. In fact, this might be preferable to having the reader located on the keyboard itself. Unfortunately, one thing that’s lacking is a front camera setup that supports Windows Hello’s facial recognition sign-in. 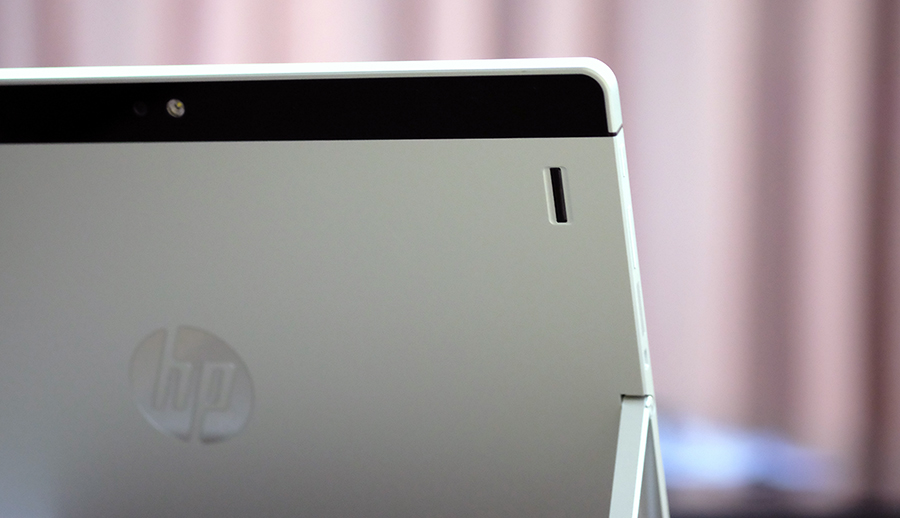 Nevertheless, both the rear 5-megapixel and front 2-megapixel cameras support 1080p30 video capture,  although only the rear camera has autofocus.  Another nice touch is the dual-array microphones with built-in noise reduction software, which should boost your voice clarity in calls.

In addition, like many other HP products, the Elite x2 comes with speakers tuned by Bang & Olufsen. The speakers are located at the top, and before you think that the B&O speakers will provide some quality sound, let’s just say that they are severely underwhelming. Music sounded thin and flat, harsh even, and we could not get the volume up to the level we wanted. Compared to the Surface Pro 4’s volume levels and far more full-bodied sound, the Elite x2 is seriously lackluster.

But fortunately for HP’s hybrid, it’s a business device, which means that the unappealing sound matters less than it would on a consumer notebook. To our ears, it also sounds like HP has tuned the speakers for greater voice clarity, which would make sense as Elite x2 owners are more likely to be making voice calls instead of blasting the latest Billboard hit.

Finally, the Elite x2 has been designed to be easily serviceable as well. The kickstand is removable and can be easily replaced, and once you unscrew the six T5 screws along the bottom edge, the display can be pried off with a suction tool to expose components like the SSD and battery. Enterprises dealing with sensitive work often don’t allow employees to send their devices in for servicing because of the data stored on their machines, but technicians can now quickly open up the Elite x2 to return users their hard drive before servicing it. 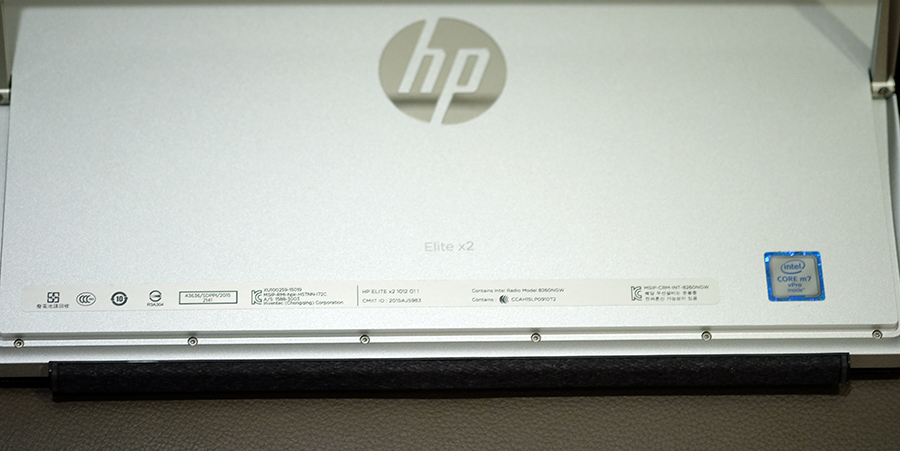