There's no other way of saying it, the new Radeon HD 4850 from ATI is an absolute hit. At a competitive price, while offering such performance, its release forced NVIDIA to dramatically slash prices of their GTX 200 cards. And although NVIDIA eventually responded with the hastily conceived GeForce 9800 GTX+, which offers similar performance at almost the price of a Radeon HD 4850, this pricing scheme seems to be haphazardly enforced. In Singapore, prices of GeForce 9800 GTX+ still exceed those of the 4850 by quite a fair bit (around S$50), leaving buyers here looking for cards in that range with little choice but to go with ATI.

Still, the Radeon HD 4850 is by no means perfect. It has its own fair share of issues, and the most pressing one is heat. In our previous review of a reference 4850, we recorded the operating temperature of the core to be a whopping 82 degrees Celsius, making it one of the highest ever recorded. Even though this temperature is technically within the safety bounds for a modern GPU, it clearly has lots of room for improvement. 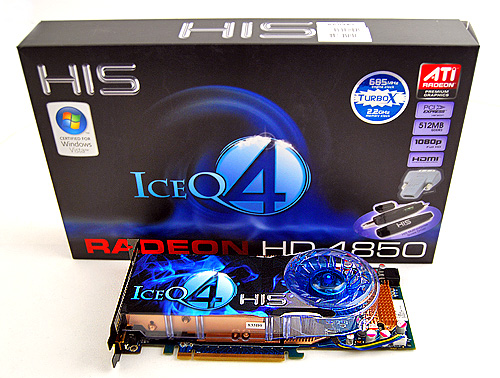 Enter HIS then, the Hong Kong-based graphics card vendor famous for its IceQ cooling solution with their own take - the HIS Radeon HD 4850 IceQ 4 Turbo X. They believe that their IceQ cooling solution, now in its fourth generation (hence IceQ 4), is exactly what the 4850 needs to keep cool. They even claim that it can bring gaming temperatures down by as much as 20%.

While that sounds all impressive and good, we'll reserve our judgment till we test it out for ourselves. The HIS Radeon HD 4850 IceQ 4 Turbo X not only sports the latest IceQ cooler, it is also factory-overclocked. So far, it's beginning to look like an unbeatable combination doesn't it? Read on to find out, but first, a quick look at the 4850 and some of its competitors.