It has been a while since our last HIS graphics card review, and it's befitting that we turn our undivided attention to the limited edition IceQ R9 290X Hybrid card. Based on the "Hawaii" graphics core, the card sports a slightly overclocked Radeon R9 290X graphics core that has been rated to perform up to 1100MHz, an increment of roughly 10% over the default ceiling of 1000MHz. Besides this, the card also features 4GB of GDDR5 video memory that has been overclocked to operate at 6000MHz, against the default of 5000MHz. Hence, a robust cooler like its Arctic Accelero Hybrid cooling system is in order to keep things running cool! 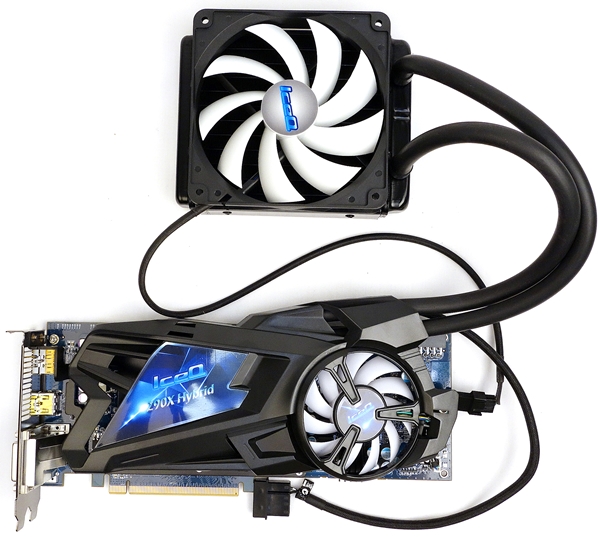 The water block of the cooling kit is in direct contact with the card's GPU, while the "special metal rib" is a metal plate that conducts heat primarily from the video buffer memory chips. Right above these components is a white 80mm PWM intake fan encased in the plastic sheath. The look and feel of the card would have been improved tremendously if the sheath had been made from metal instead. At the heat exchanger or radiator, there is a 120mm PWM cooling fan. The entire radiator unit has a height of 150mm, and a width of about 125mm.

The metal backplate provides support for the card, and we noticed that there are cut-outs, which expose areas of the card's rear PCB. This may be for ventilation, to allow for better cooling of the exposed components. The card is powered by a pair of 8-pin Molex connectors, with a rated TDP of 300W. As we move along the top edge of the PCB away from the Molex power connectors, we see a BIOS switch that toggles between two sets of BIOSes. According to the company, one set is purely for backup. 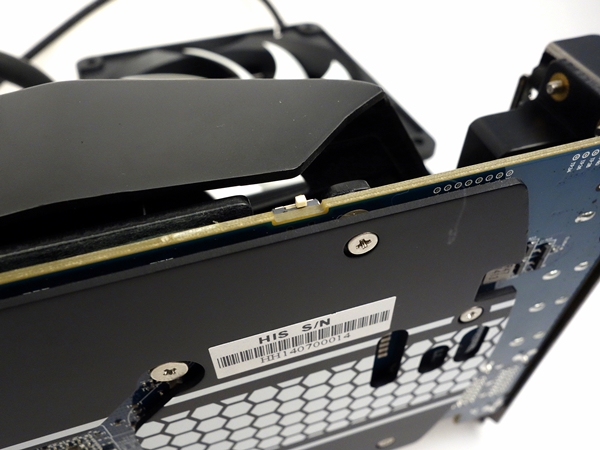 For its video connectivity options, there are two dual-linked DVI ports, a DisplayPort port and a HDMI one.

In terms of the dimensions of the card, despite the presence of the fan sheath, the card measures a svelte 45mm in width, and is effectively a dual-slot component. After taking stock of its measurements, let us see if it measures up in terms of performance We rounded up one of the reviewed AMD Radeon R9 290X custom graphics card from ASUS for comparison. It makes a good representative for such cards on the market. We have also included other top-end NVIDIA cards like the Gigabyte GeForce GTX 780 Ti Windforce 3x OC. Below is the complete list of cards fielded for comparison.

Since we've established the full performance profile of the Radeon R9 series of graphics cards, we're only focusing on a subset of our usual benchmarks to determine the gaming performances of the HIS limited edition card. The two benchmarks used are as follows:-

Here's a quick look at the specifications of the HIS IceQ R9 290X Hybrid 4GB card against the competing cards:-

Write a Review
Compare This | Specifications
Excellent cooling system
Good price point
High power consumption level
Our articles may contain affiliate links. If you buy through these links, we may earn a small commission.
Sponsored Links