Is it just us, or does it feel like Microsoft is constantly announcing new versions of its Surface tablet? After all, it was only 11 months ago that the originally Surface Pro was launched in Singapore. And now, a mere 14 months later, Microsoft will be launching the third iteration of the Surface Pro tablet in August this year. The thing is though, we're more than willing to forgive them because, this time, they've finally got it right.

Previous versions of the Surface Pro tablet have had 10.6-inch displays - a good tablet size, but a bit small for any serious productivity. The narrow 16:9 ratio also reduced screen real-estate and made working in portrait mode impossible. For the Surface Pro 3, Microsoft has increased the screen size to 12-inches, and changed the aspect ratio to a more sensible 3:2. Despite the size increase, the device is actually thinner, at just 9.1mm thick (much better than the chunky 13.5mm profile of the Surface Pro 2), and lighter, at just 800g (compared to 900g for the Surface Pro 2). The increased screen space is immediately obvious, and desktop space looks far less cramped now. Compared to a 13-inch notebook display, there's actually very little difference between the two. The device also feels extremely light for its size, and can be held one-handed quite comfortably.

To go with the larger display, Microsoft has boosted the screen resolution on the Surface Pro 3 to 2160 x 1440 pixels, which gives it 216 pixels per inch - just slightly less than the iPad Air's 264ppi. Nevertheless, the panel is ultra sharp, with bright colors and very wide viewing angles, and compared side-by-side with an iPad Air it is impossible to tell the difference in clarity, even when closely scrutinized. 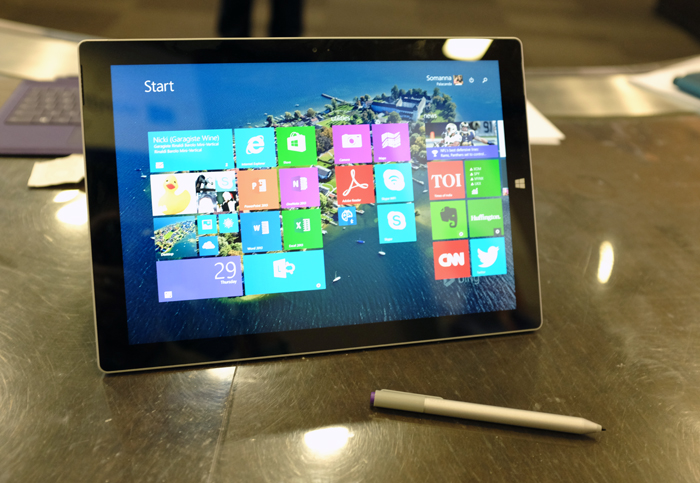 The other big design improvement for the Surface Pro 3 is its new friction-hinge. While the original Surface Pro's kickstand had only one position, and the Surface Pro 2's improved that to two positions, the Surface Pro 3 can be set to any angle within its nearly 180 degree range. It feels firm, reliable, and smooth and above all, it feels like this is the way the Surface kickstand should have worked in the first place. The flexible angle makes the Surface Pro 3 just as usable on your lap as it is on a table. 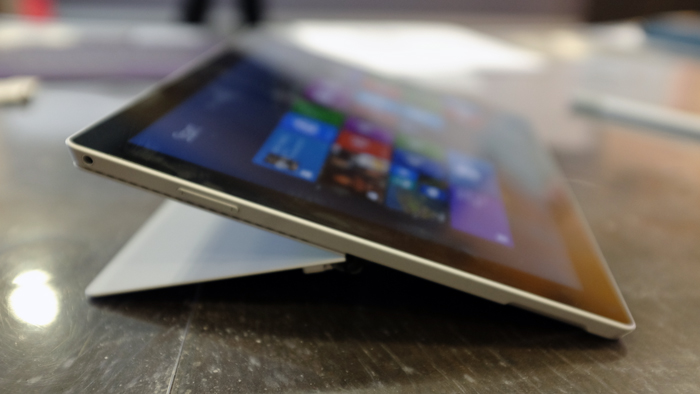 Connectivity is the same as the Surface Pro 2, with a full-size USB 3.0 port, a microSD card reader, and a Mini DisplayPort.

Like the Surface Pro 2, the Surface Pro 3 is packaged with a stylus, but the new stylus really has no similarity at all to the old one. "It's a pen, not a stylus" says Somanna Palacanda, Microsoft's Director of Business Development for the Surface. Palacanda calls it a pen because it really feels like a pen, with a similar weight and thickness, thanks to its polished aluminum build (which nicely matches the rear of the Surface Pro 3).

Clicking the top of the pen automatically opens up OneNote, which you can use to jot down notes, which are then automatically saved to your OneDrive account. Interestingly, Microsoft has ditched Wacom for its new stylus pen, going instead with N-trig technology. The pen feels comfortable to write with, with a reassuring and familiar weight to it and it responds really well too. Palm block technology lets you comfortably rest your hand on the display while writing and the tip of the pen feels firm and precise - in fact, it's probably the best writing experience we've experienced on a tablet so far. 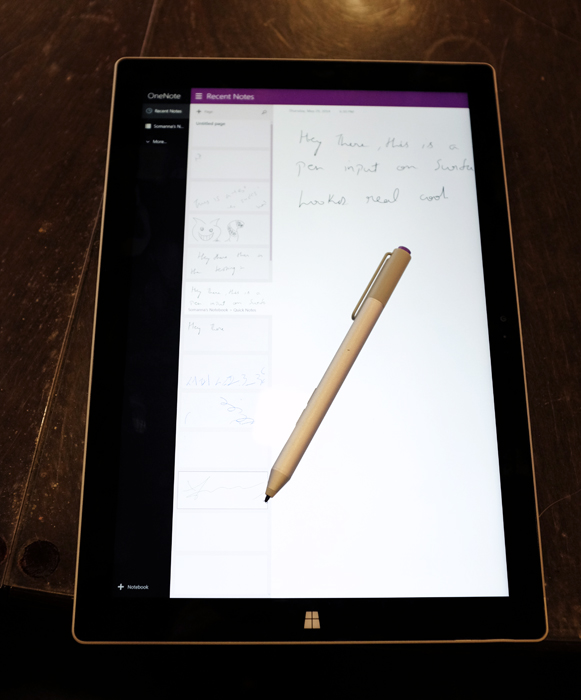 Due to the Surface Pro 3's slightly larger screen size, an all new Type Cover has been designed for the device. The new Surface Pro Type Cover is roomier than previous versions, but is just as thin and light, and magnetically connects to the bottom of the Surface Pro 3 via a proprietary port. The Surface Pro 3 Type Cover also introduces a very clever double-fold hinge, that lets the keyboard either lay completely flat on a surface, or fold up at the rear and magnetically attach to the display's lower bezel, which elevates the rear of the keyboard and provides a much more comfortable typing position. It's a small change, but a massive improvement comfort-wise, and makes the keyboard more ergononomic and comfortable to use. Unfortunately, the Type Cover is sold separately, and will cost a fairly hefty $183. 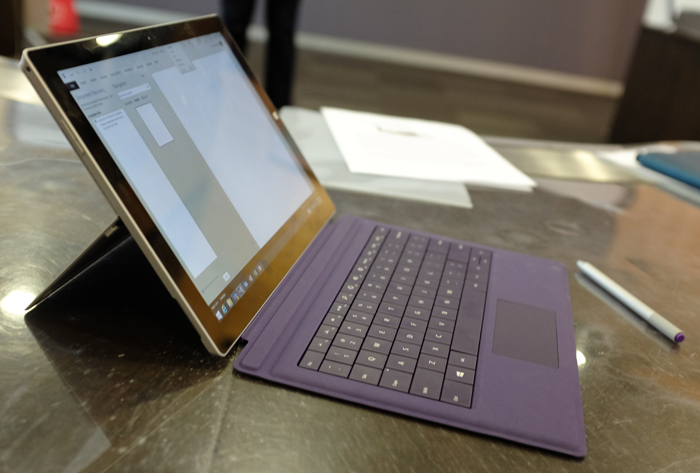 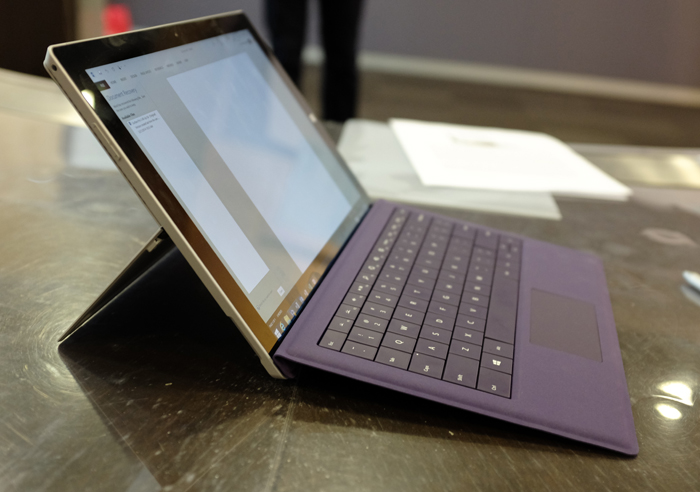 Other improvements include the return of the tactile clickpad - which was replaced with a touchpad for the Type Cover 2. Fortunately, the new clickpad is better than ever, and is slightly larger, with a firm, deep click. 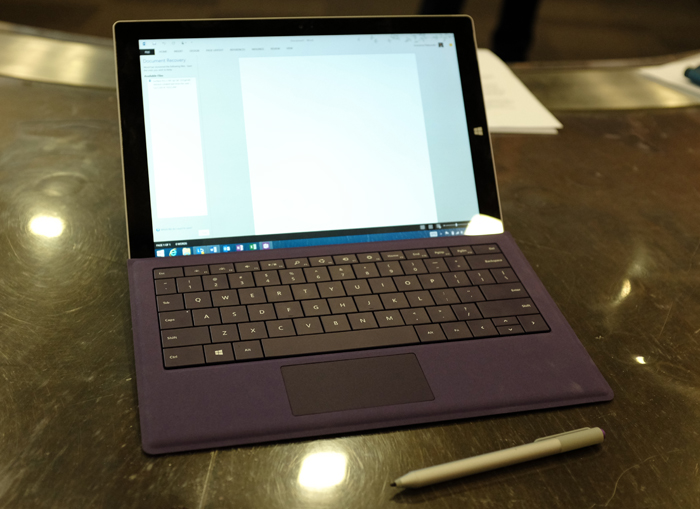 The Surface Pro 2 was never released in Singapore, and honestly, there wasn't much reason for it to be released anyway - it was an improvement certainly, but how much better was it than the original Surface Pro? Not much. The Surface Pro 3 on the other hand feels like the experience Microsoft has been promising from Surface hardware from the start. The increased screen size and less awkward aspect ratio feels right; it's more usable and much better suited to the Windows 8.1 OS. Despite this, it doesn't actually feel heavy. Yes, it's heavier than an iPad Air, but Microsoft isn't competing with other tablets, it's competing with notebooks, and, even with the keyboard attached, the Surface Pro 3 is much lighter than even an 11-inch MacBook Air.

With each version of the Surface Pro, Microsoft has claimed that it can completely replace your notebook. We've been skeptical of that claim so far, but after our session with the Surface Pro 3? We believe it. The first Surface Pro was limited by certain compromises, but there's no such restrictions here. This is the best hardware Microsoft has ever made, and a true notebook killer.

Five versions of the Surface Pro 3 will be available, starting at $1108 for the Intel Core i3 model, with 64GB storage, and going up to a whopping $2698 for the Core i7 model with 512GB storage. All models are scheduled to launch in August this year, but pre-orders are already being taken at Microsoft's online store.