Okay, but what about the good parts? 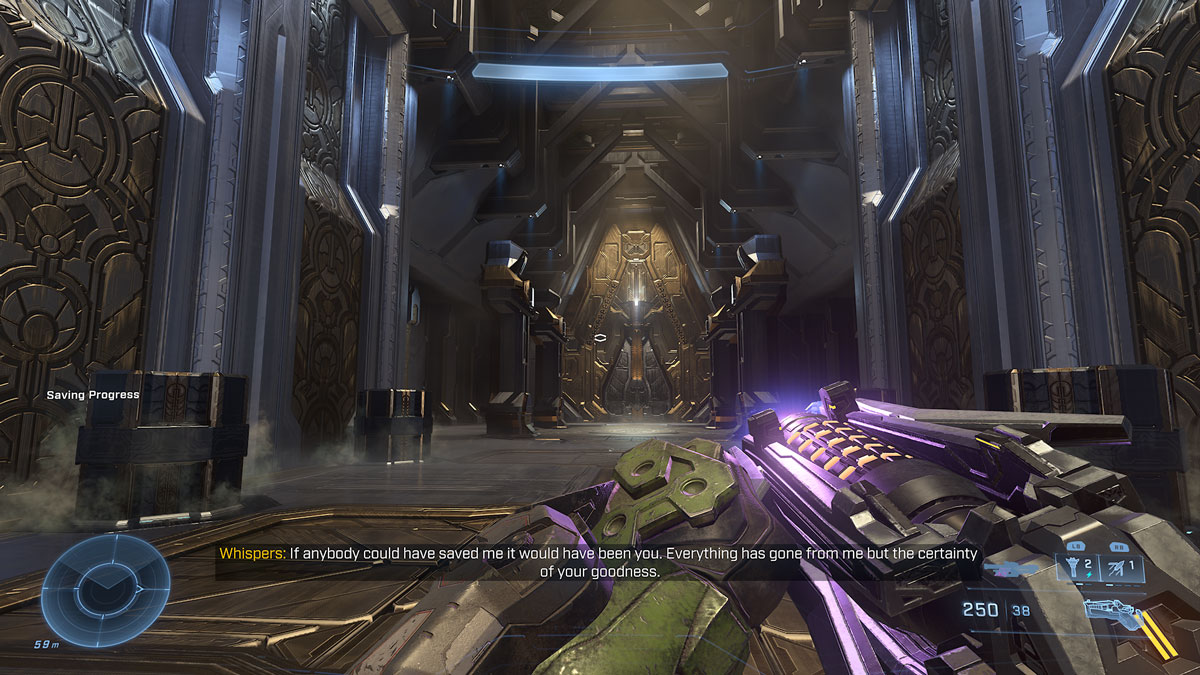 At this point, it might sound like I hated Halo Infinite - but that couldn’t be further from the truth. This is one of the best first-person shooters I have played in a long time, due to 343’s excellent work in fine tuning modern Halo combat. Master Chief has a host of equipment to use as he bounces from one enemy to the next - such as Thrusters which allow him to quickly dodge attacks or Threat Sensors that ping enemies. The immediate standout is the Grappleshot ability, which turns you into Spider-Man as you swing from tree to tree in Zeta Halo, or the Doomguy as you pull yourself closer to enemies for a finishing blow. It’s such an incredibly fun addition to this series, opening up all sorts of opportunities in combat while doubling as a speedy mode of traversal.

Zeta Halo might not have much to offer in terms of diversity, but it’s still a lot of fun to go off the beaten path in between missions to pursue side activities. FOB bases have you defeat a camp of enemies to create a fast travel point Far Cry-style, and Riven Gates act as a challenging gauntlet of enemies for Master Chief to take on - should he dare. There are also propaganda towers to destroy around the map, spewing pro-Banished nonsense and hurling amusing insults at the Master Chief in equal measure.

I usually let them play out, because the writing for these Grunts are just absolutely fantastic. Every line these dumb little aliens spew out before you shove them off Zeta Halo for good is incredible. They’ll scream, “There is no way that I’m heavier than you!” when you grapple towards them or, “Sucks that your blue lady blew up!” Let’s be honest, that last one probably made Master Chief want to lie down for a bit.

Halo Infinite’s gunplay is fantastic as well, offering a wide arsenal of weaponry for Master Chief to kill these poor Grunts with. Despite this, don’t expect to just sail through the campaign on the wings of your Grappleshot alone - the game’s bosses and later levels do not hold their punches, constantly keeping you on your toes with difficult fights and intelligent enemies. This actually helps with all the repetition in the game, because it’s just fun to shoot things no matter where the game takes you. I cannot say the same for the vehicles in this game, as they all handle like poorly made origami contraptions skidding across ice. It is actually mind-boggling that they shipped in this state. 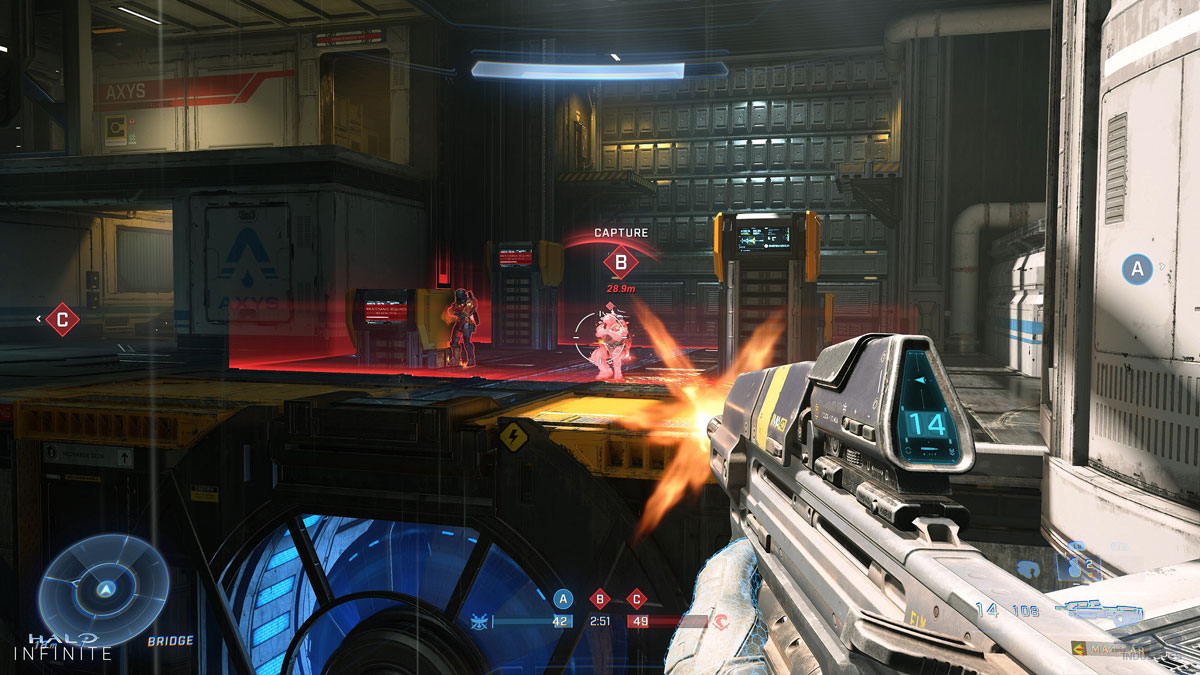 Halo Infinite Multiplayer has been out for awhile now, so I won’t dwell too much on it other than to say that it’s a ton of fun. Everything that makes combat in the story campaign great - gunplay and equipment - translates beautifully to chaotic multiplayer shootouts where matches unfold at a blistering pace. The game’s multiplayer launched without beloved franchise game modes and fans have rightfully lambasted 343 for it, but seeing the developer address the player base so quickly by adding these modes back in lends some confidence in their future support of the game.

Not everything about Halo Infinite Multiplayer is perfect, obviously. Modes like Oddball, which forces you to hang onto a ball for as long as possible without dying, are just no fun compared to Slayer and Capture the Flag. The awful, awful battle pass hanging over this free-to-play game feels like a microcosm of everything people hate about free-to-play games to begin with: endless grinding you can pay to skip, every time. Instead of taking the right lessons from fun and seamless Battle Pass systems like the one Fortnite has, Halo Infinite goes in the total opposite direction and drip feeds XP points to players by making them defeat opponents using weapons they don’t like, or play a certain game mode X amount of times. I’ve played this game for such a long time, and I’ve honestly given up on earning all the cosmetics I’d like from this awful system.

Fortunately, multiplayer is still plenty of fun to play for the sake of having fun alone. 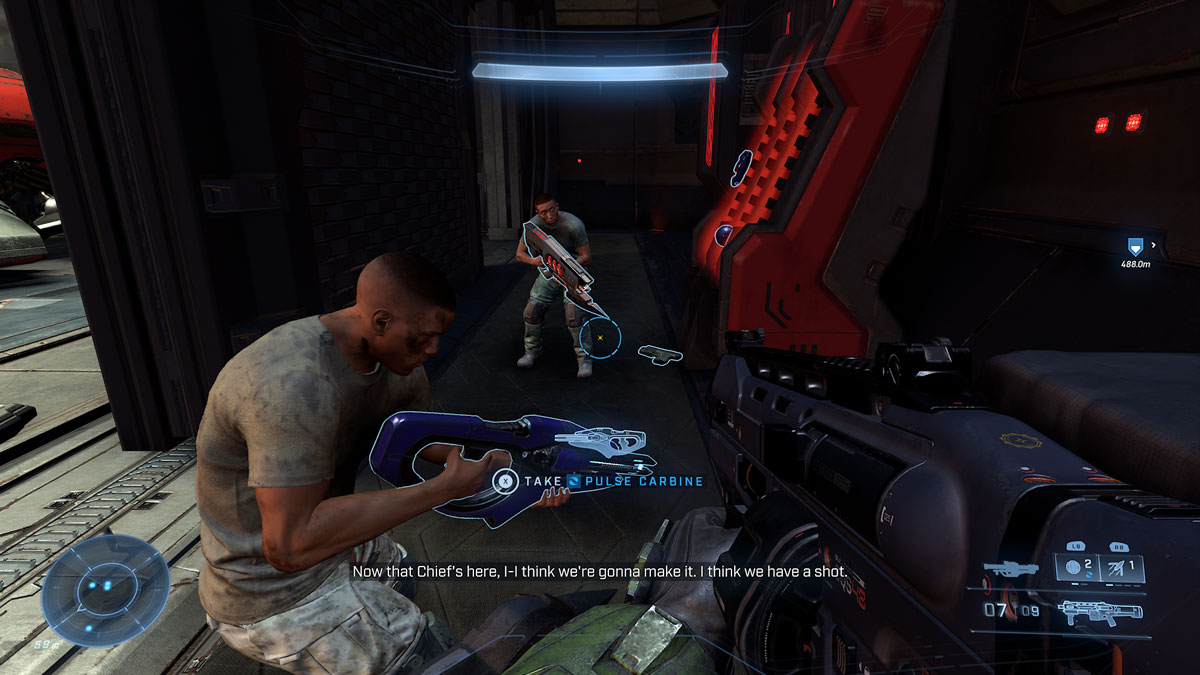 Halo Infinite represents a franchise reset, bringing Master Chief back to basics on a new Halo ring brimming with new threats. Master Chief’s characterisation and the game’s stellar combat make this story campaign an addictive experience, but you’ll have to overlook its repetitive level design, boring big bad and unsatisfying conclusion at the same time. Halo Infinite Multiplayer is a consistently fun time, but you will have to similarly overlook its inexcusably grindy and outdated battle pass system too.

Despite all its faults however, Halo Infinite is still worth a playthrough for newcomers and fans of the series alike. Master Chief’s latest adventure comes unburdened from the messy history of this franchise and as a result, feels like a refreshingly grounded journey propped up by fantastic gameplay and beautiful scenery. Shame about all those Banished mucking about the place, but that’s what you’re here for, after all. Go get 'em, Chief.

Write a Review
Compare This | Specifications
Beautiful open world with fun side activities
Grunts are just fantastic and hilarious
Master Chief is a great protagonist
Bosses do not pull their punches
Weapons, shooting, equipment are fantastic
Multiplayer modes are a ton of fun
Story campaign objectives are incredibly repetitive
Level design is very same-y across all missions
Main villain doesn’t feel threatening, and the Banished just aren't compelling
Multiplayer battle pass is an unforgivable grind
Lacking classic game modes
Our articles may contain affiliate links. If you buy through these links, we may earn a small commission.
Sponsored Links