Google Wifi review: The easiest networking system you will ever use

To test this new breed of mesh networking systems, we are changing our test environment, but our test setup remains relatively unchanged. We have two notebooks, one acting as a host machine and the other as a client device. The router, or in this case, node, acts as a gateway. Since mesh networking systems typically manage channel settings on their own, we will leave it that way. For systems where manual settings are possible, a channel bandwidth of 40MHz is selected where applicable, while 80MHz or more is used for the 5GHz AC band.

Here are the different Google Wifi setups we used:

To further clarify, in tests where nodes were placed on the second or third floor, the measurement would be taken with the client device about two meters away from the node.

In this test, we will be looking at the performance of a single Google Wifi node in a single-story (using the differnt distance markers) and multi-story home. All other competitive mesh networking system results are also that of a single node setup. 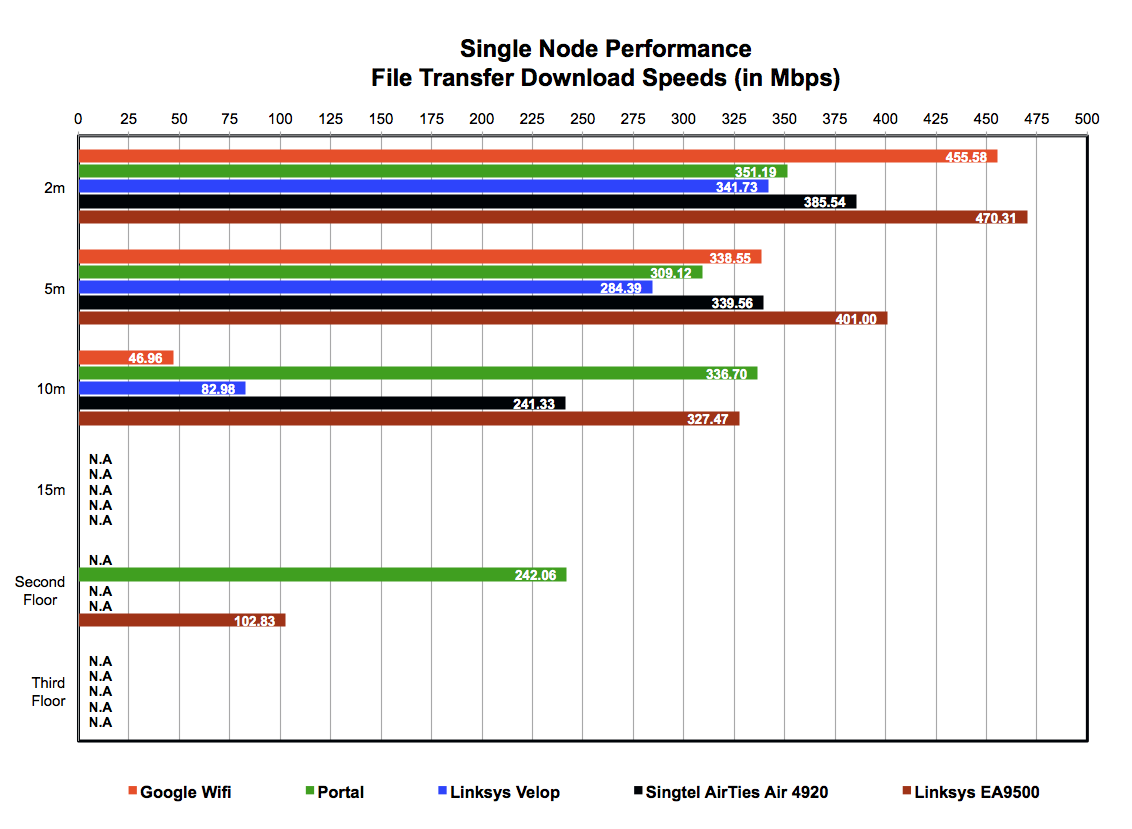 The performance of a single Google Wifi node was quite disappointing. At 2 meters, the Google Wifi was very fast, capable of challenging even the likes of the Linksys EA9500. But as we moved further away, performance started dropping significantly. At 10 meters, for instance, we noticed that we were assigned to the slower 2.4GHz network and speeds were only a fraction of what we had achieved at 2 meters. Needless to say, we couldn’t get a decent connection at all at 15 meters or from other floors.

In this test, we placed a second Google Wifi node in between the first node and the 15-meter mark to create a mesh network to get signal to the problematic 15-meter mark. We did the same for other mesh networks to see how their performance would compare. 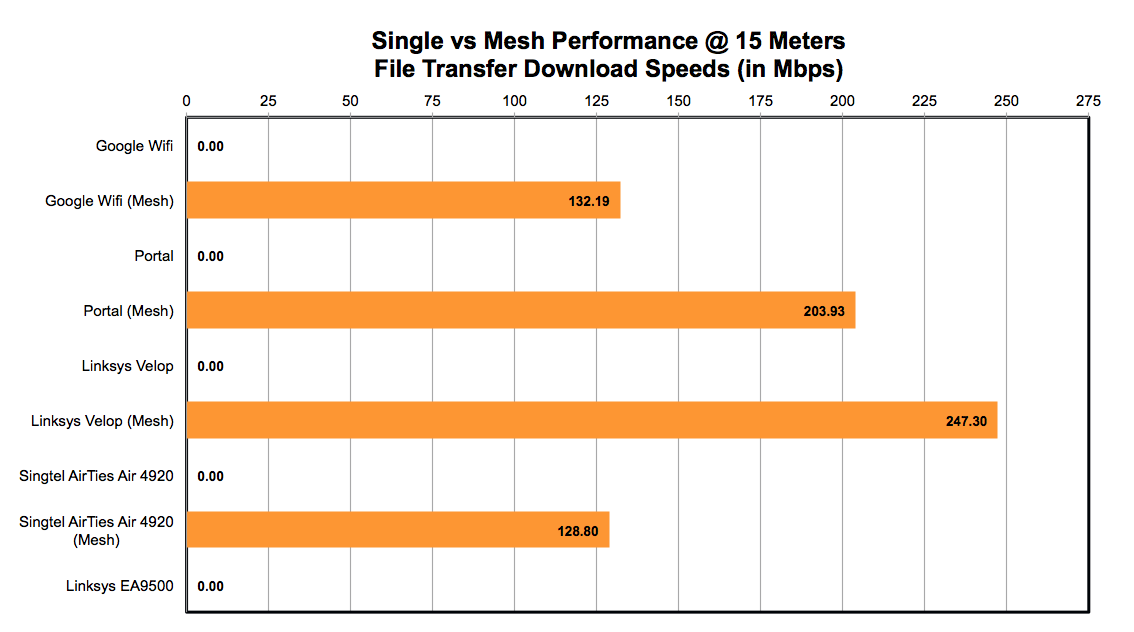 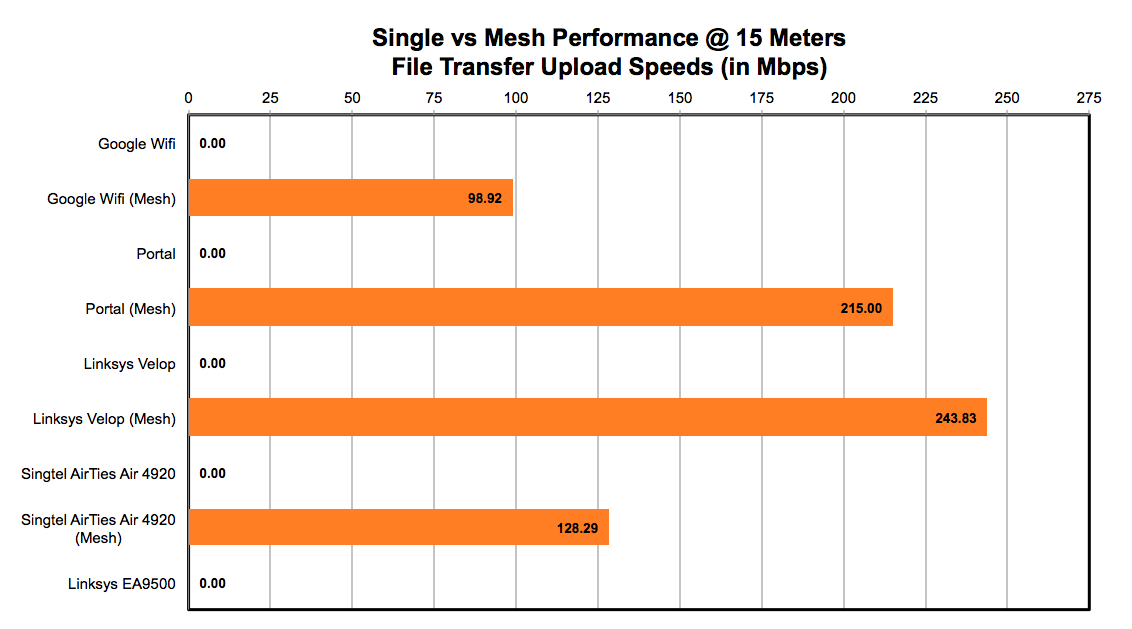 With a second Google Wifi node in between the first node and the problematic 15-meter spot, we were finally able to get a decent connection. Overall performance is nothing shout about as it was only about half of what the Linksys Velop and Portal Wifi systems could accomplish. Nevertheless, it was still very usable and we were able to comfortably stream high-res YouTube videos - even 4K ones! 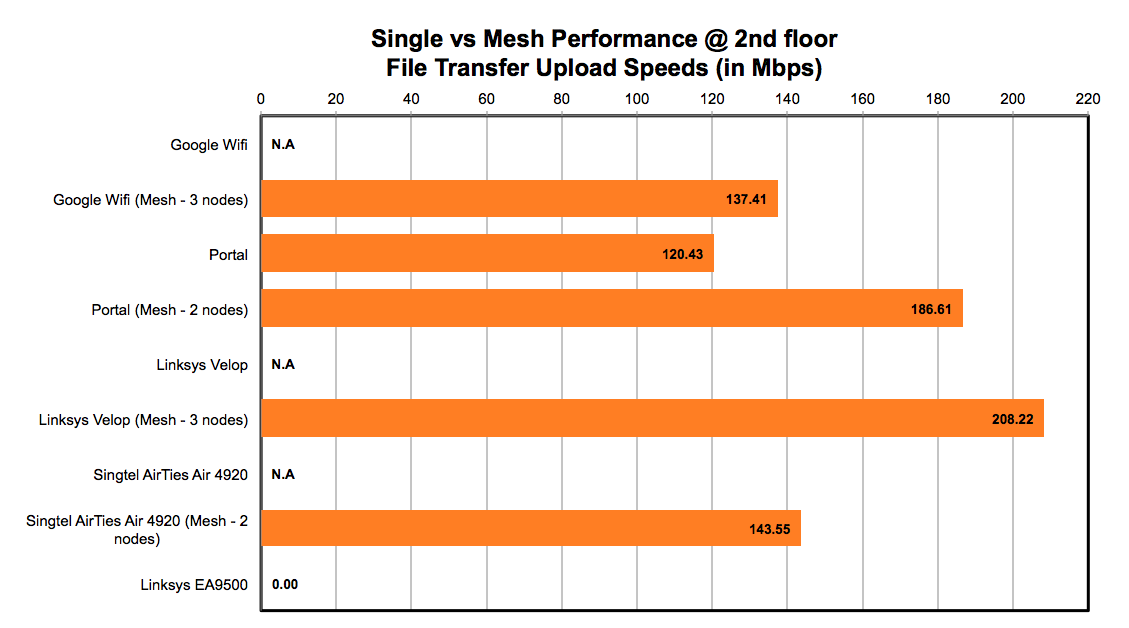 With two Google Wifi nodes in place spread across two floors, we were able to get pretty good speeds on the second floor. Download speeds were the highest we have recorded at 267.11Mbps. However, upload speeds were quite disappointing at just 137.41Mbps. Its rivals like the Linksys Velop and Portal Wifi systems were definitely much more consistent. That said, the Google Wifi’s overall performance was better than the AirTies Air 4920.

In this test, we placed a third Google Wifi node on the third floor to expand coverage to three floors. We did the same for other mesh networks to see how their performance would compare. However, do note that the Portal and Single AirTies setups only consist of two nodes, with one node on the first floor and the second node on the second floor. 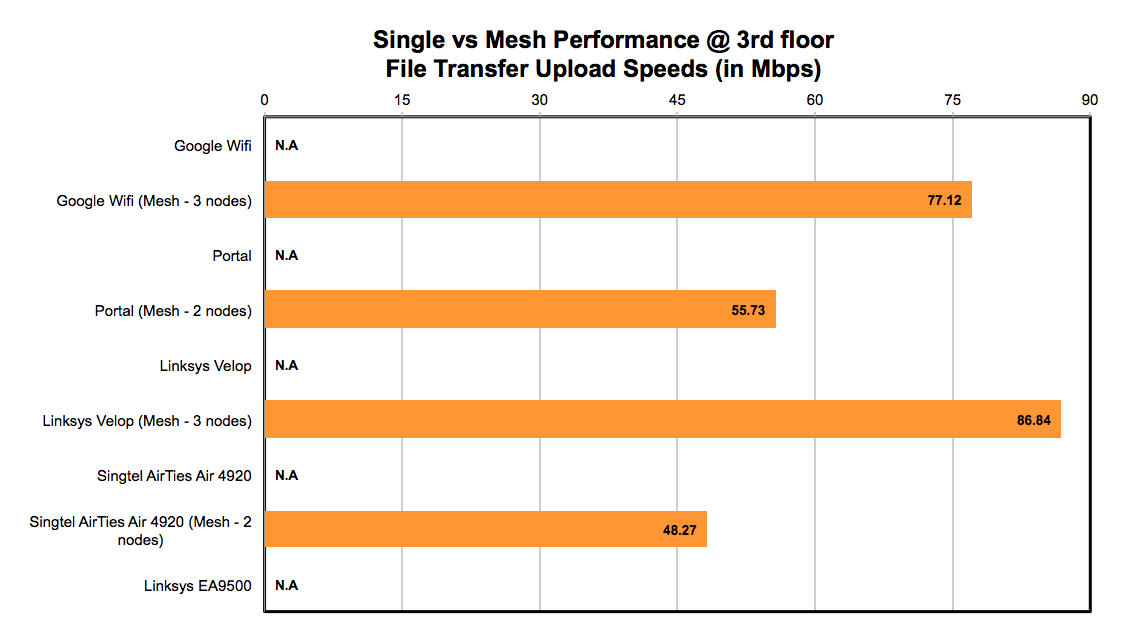 With three Google Wifi nodes in place, we were able to expand Wi-Fi coverage to three floors. The Google Wifi’s performance here was a bit of a mixed bag. Amongst all the mesh systems, it recorded the lowest download speeds, but its upload speeds were quite decent. If anything, we would say that its performance at this range is more consistent than its rivals as it managed about 70-ish Mbps overall. Only the Linksys Velop was more consistent. In the real world, we found that these speeds were sufficient to stream high-res 4K videos from YouTube. In other words, it should be good enough for most web browsing and video streaming applications.

Excellent for some users

For advanced users who are more concerned about features and performance, the Google Wifi is probably too much of a compromise. It might be really easy to setup and use, but certain features are sorely missing, like the lack of VPN support and the ability to assign devices to its 2.4GHz and 5GHz networks.

Performance isn’t its strong suit either. It is good enough for web browsing and high-res video streaming, but users who demand more and want to share files wirelessly or backup their systems wirelessly should look elsewhere. And even though it does seem to work quite well in expanding Wi-Fi coverage, one thing to note is that the range of each individual node is quite limited. As our single node performance charts show, performance starts to dip drastically once you go past 5 meters. What this means is that even though Wi-Fi coverage is expanded, the extent to which it is expanded can be quite limited. Obviously, this depends very much on your home layout and environment, but it is worth keeping this thought in mind.

If you really want a mesh networking system, but don't want to sacrifice on performance, the Linksys Velop seems like a better and more consistent performer, albeit it's a much more pricey option. If you can do with just two nodes, the recently reviewed Portal Wi-Fi router is good too. 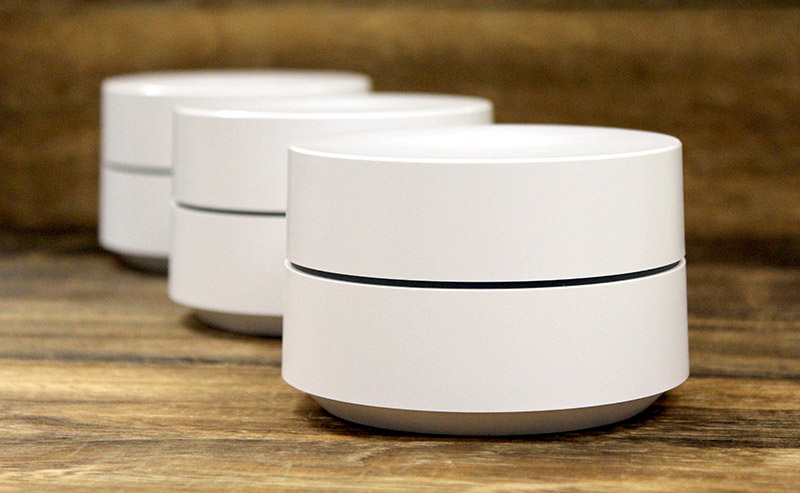 Nevertheless, Google Wifi does have its strong suits. Most importantly, it is incredibly easy to use and fast to set up. Even the most clueless of users can get a mesh network up and running in less than 10 minutes. For users who are not too concerned about performance, and don’t want to fuss around and meddle with networking settings, Google Wifi is ideal. It truly is a fuss-free way to expand Wi-Fi coverage around the house.

In closing, Google Wifi is a neat Wi-Fi mesh networking system that is great, if not superb for casual users whose main priority is to have Wi-Fi coverage around the house. For users with more specific or demanding needs, it is better that you look elsewhere.