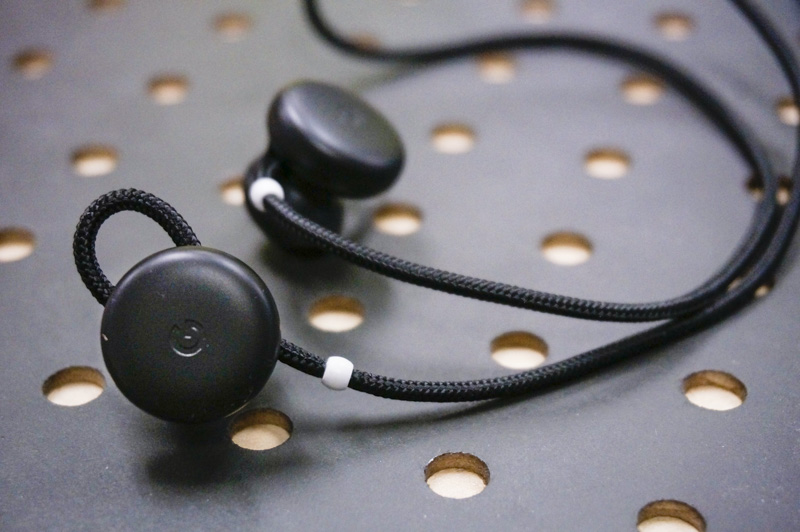 Google’s Pixel Buds were announced together with the flagship Pixel 2 phones earlier this year, along with their array of smart speakers and connected devices. All endeavors that bring the search engine giant just a little bit closer to you by creating an actual physical presence in your home. Tied together by a fabric loop, these wireless in-ear headphones then, are Google’s first attempt to enter the audio arena, and promise quality sound to go with better integration with Google Assistant than anything currently out there in the market. Is this a perfect match for the Google Pixel 2 XL smartphone? We find out. 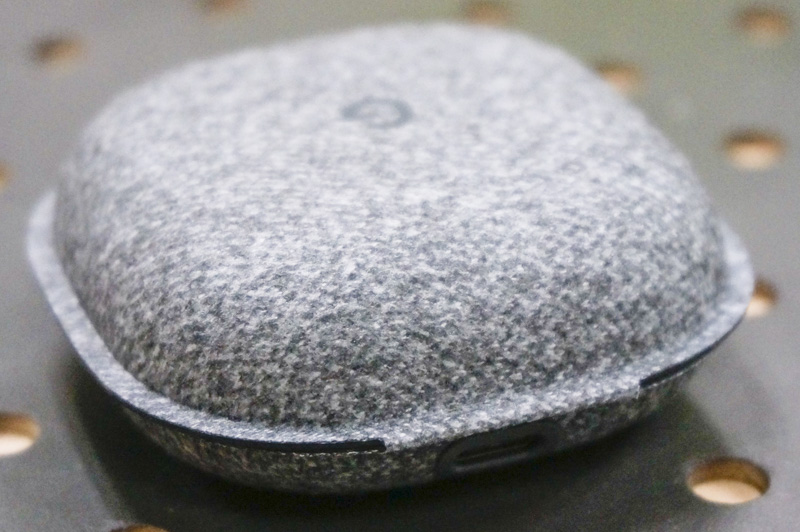 The Pixel Buds come in a compact fabric carrying case, that’s best described as minimalist. It also acts as a charging station, and the pairing base for the earphones. The Pixel Buds provide up to five hours of listening on a single charge, while the carrying case gives you about four more charges so you have a total of 24 hours of listening on the go.

As you can see from the picture below, the case has three LED indicators to indicate how much battery life is remaining too. We like that the earphones get an hour of listening from as little as a ten-minute charge, as that means you don’t have to be without music for long.

Like the Apple AirPods, the Pixel Buds come without replaceable ear tips, so the fit will vary very much on how well the shape of your ears matches their design. This wasn’t so great for us, so consequently the seal was rather poor - we found ourselves having to raise the volume significantly to use it on the go.

Likewise, the fabric cord that connects the Pixel Buds didn’t sit that nicely in our ears either. It seems the fabric loops have a tendency to get tugged back to their original shape, so the headphones were ultimately secured by sheer fit. In which case, they might as well just have been true wireless ear buds. 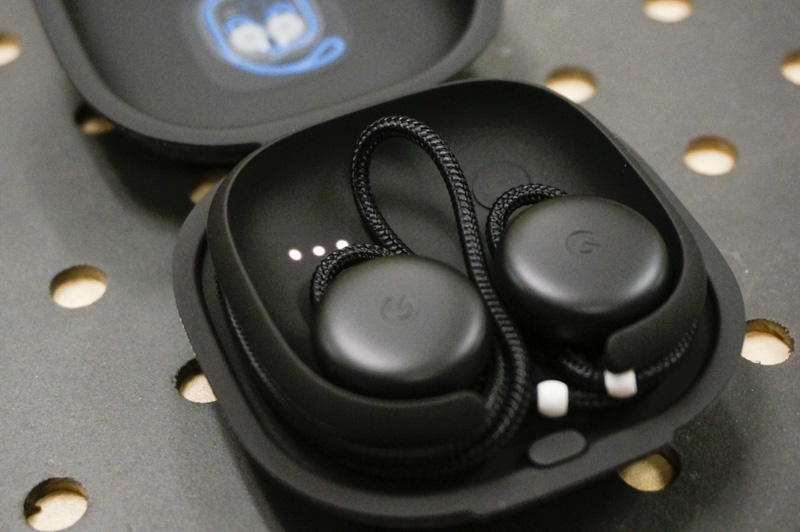 The stand out feature on these headphones is of course the integration with Google Assistant, and this absolutely works as advertised. With a Google Pixel or Pixel XL, you simply leave your finger on the right earbud of the Pixel Buds, and ask away once you hear the beep.

We tried this for road directions, getting the temperature in various countries and even checking exchange rates on the go and found that on the whole it worked well. Even when we were asking for directions with decidedly un-American names, like “Tampines” for example.

The only issue was that Google Assistant would default to U.S. units of measurement even with our region set to “Singapore”. So, temperature came back in Fahrenheit instead of Celsius, and all currency conversions defaulted to USD unless specified. 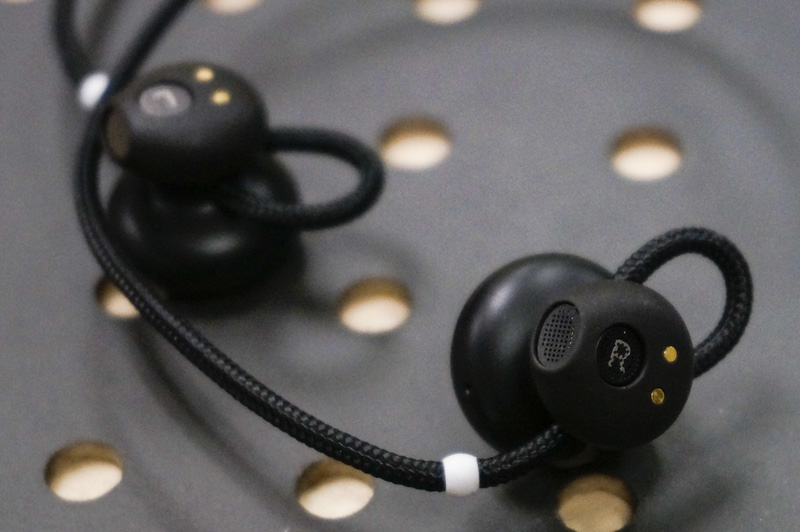 Of course, we had to put the real-time translation capabilities to the test, and we found that it worked with mixed results. For this, you’ll need the Google Translate app on a Pixel phone. After that’s installed, simply call up Google Assistant and say something like “Help me speak French”, to start.

Tap and hold the right ear bud while you speak in your native language, and the Pixel phone will translate and read out what you said in the selected language. The other person then holds down a button and speaks into your Google Pixel phone, and you’ll get the translation in your Pixel Buds. Most of the time it works, but the initial capture in English needs to be right so you’ll probably have to repeat yourself several times.

In terms of music performance, the biggest revelation we found was that the Pixel 2 XL is actually pretty bad as a media player – at least, wirelessly. We first tested the Pixel Buds with the paired Pixel 2 XL and were disappointed to hear bloated lower mids and bass. Switching over to our Huawei P9 and an iPhone 8 Plus, the bloat disappeared, letting us properly evaluate the headphones.

Perhaps in attempt to make up for the poor seal, the Pixel Buds seem to be tuned more towards performance in the lower audio ranges. So when you put on a faster moving electronic track like Love Foolosophy by Jamiroquai for example, you’ll get a pretty enjoyable rendition as the headphone handles the pace of the track well.

However, put on a track with acoustic instruments that play in the mids and trebles, and you’ll find yourself searching for that bit of sparkle that makes string instruments really stand out. For example, on a recording of Ordinary People by John Legend, Legend’s vocals were pretty well resolved, but the piece lacked the crisp highs that his piano brings.

“Safe” is how we’d describe the performance of these headphones. It has a very slightly forward sound that tends more towards the lows than the highs. Imaging should also be better for this price point, as we really found ourselves wishing the headphones delivered more depth and better separation at times.

The above findings again carry forward to our formal test tracks, where it seemed the headphones performed evenly across all tracks.

With Buckethead’s Sail on Soothsayer, the lack of clear upper mids certainly took away from Buckethead’s guitar work some. While there was a decent amount of bass, the clarity and extension wasn’t there, so it felt like the piece wasn’t as immersive as it should have been.

With Adele’s Melt my Heart to Stone, the headphone again delivered a presentation where we thought the bass could do with more weight. As the song progressed, we found that Adele’s vocals were often lost amongst the backing instruments, so better imaging is much needed here.

Thankfully, the Pixel Buds pulled off a better performance with Hotel California by The Eagles, as this piece plays mostly in the mids and highs. However, we didn’t get the familiar ring of the guitars, and there wasn’t really the dynamics needed for the piece to move us.

We thought the headphone did best with our final piece – Elements of Life by Tiesto. It managed to keep up with the faster pace and provide just enough stereo imaging to provide for a more immersive experience. 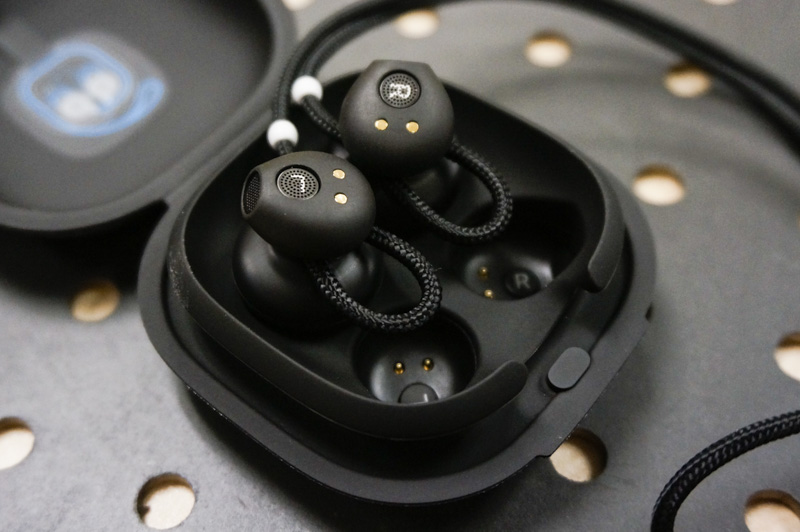 It’s hard to judge an audio product when it sounds worst paired to the main product it’s supposed to work with, but that sadly seems to be the case here. As much as it's undoubtedly cool how easy it is to call up Google Assistant and tap into the full power of Google with this headphone,  the Pixel Buds definitely need further refinement to be considered a good audio product.

For starters, we’d look at improving the fit as the leakage certainly doesn’t help to improve the bass response. We do think you should get better separation and imaging at this price, so unless you really need one-touch access to Google Translate (the app isn't limited to just the Pixel Buds), we'd recommend looking elsewhere, or at least, wait for prices to come down first. $$238 is a lot to ask for something that doesn't perform really great and worse yet, sounds worse with the Pixel 2 XL that it's made to pair with.

To be more accurate, the Pixel Buds will work with any phone, so the audio performance grouse with the Pixel 2 XL shouldn't be too much of a concern. What you should be clear about is that the Pixel Buds work great for its primary function - deliver real time language translation - while also doubling up as a pair of traditional headphones. Just don't expect it sound as good as you would of any other headphones that are priced upwards of S$200. So if you're not an audiophile and you value the translation functionality much more (perhaps because you travel very often for work), the pair of Pixel Buds is a great companion.

Sales of the Pixel Buds begin today (13th December 2017) and will be available at Singtel retail shops and online. It's also available for pre-order on Lazada.