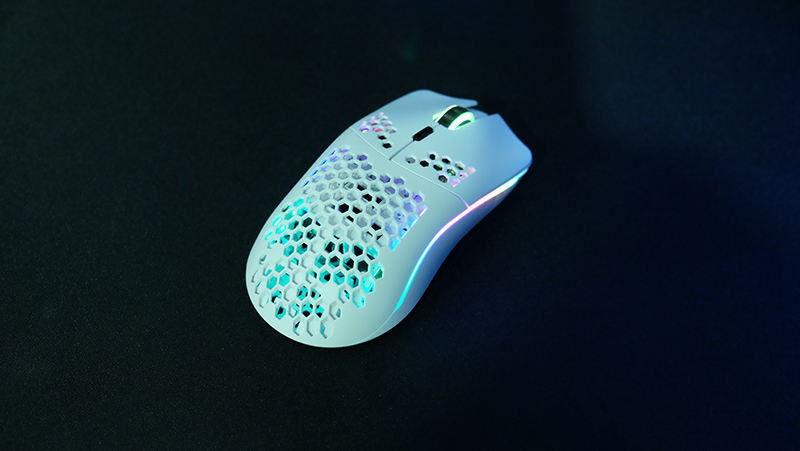 The power of BAMF

Since the release of the original Model O, Glorious has released a range of different mice in various shapes and sizes, including the ergonomic Model D and Model O-. Now, it's properly cutting the cord on the mouse that first helped establish it as a company to watch out for. The Model O Wireless combines a lightweight honeycomb chassis with lag-free wireless performance, and Glorious has slapped a really attractive price tag on it to boot. At just S$129, the Model O Wireless offers great bang for your buck, especially when set beside something like the S$239 Logitech G Pro X Wireless Superlight.

Despite the addition of the battery, the Model O Wireless isn't that much heavier than its wired counterpart, weighing just 69g to the latter's 67g. It's still heavier than the G Pro X Wireless Superlight though, and the difference is noticeable when picking the two up. 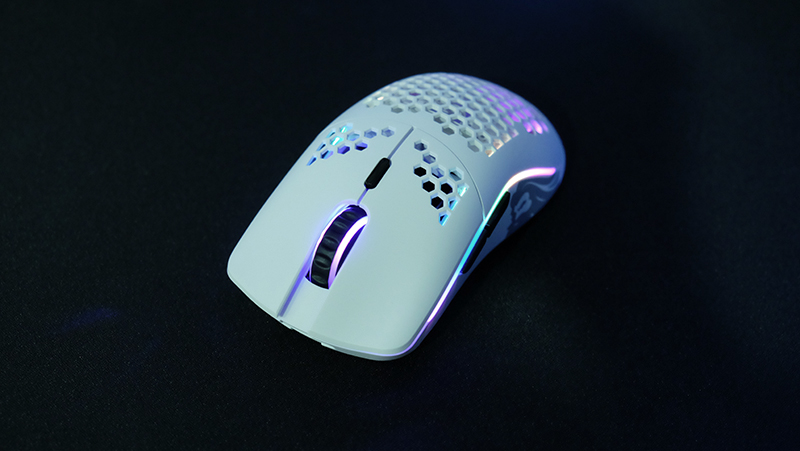 Just like the Model O, the wireless version has the same flat shape as the Zowie FK1. It's a versatile, safe shape that's suitable for all grip styles, but this is a fairly large mouse that will require similarly large hands to use if you want to fingertip or claw it. One thing to note – if you like mice with tall, prominent humps, this is not it. While you can still palm the Model O Wireless, it won't fill your palm quite as satisfyingly.

The G-Skates that comes with the mouse are 100% PTFE, and they glide smoothly with no scratchiness or the feeling of rough edges. They're protected by a film that you have to remove before use, and I like that Glorious has taken care to ensure that these skates are fresh. 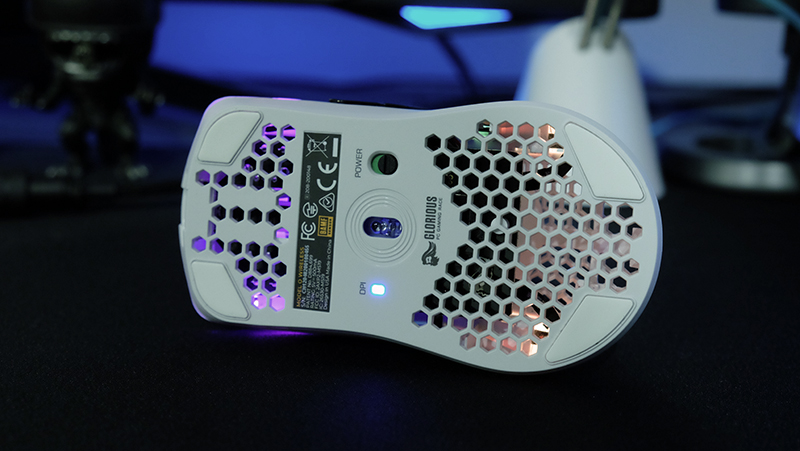 The Model O Wireless comes equipped with the same Chinese D2FC-F-7N switches as the Model O, which are rated for 20 million clicks. These are light and crisp, with minimal post-travel. There is little side-to-side button wobble too, better than on the Model O, at least on my review unit. However, I want to point out that something felt off about the switches when I first unboxed the mouse. They felt strangely shallow, and it was only after using them for a while that they started to feel better, as if they needed to be broken in.

The side buttons don't feel too good either, and there is significant post-travel after the click actuates. The scroll wheel is fairly quiet, with well-defined notches, but there is a consistent clicking noise that occurs with every spin of the wheel. That said, it remains to be seen whether longer use will aggravate this noise. 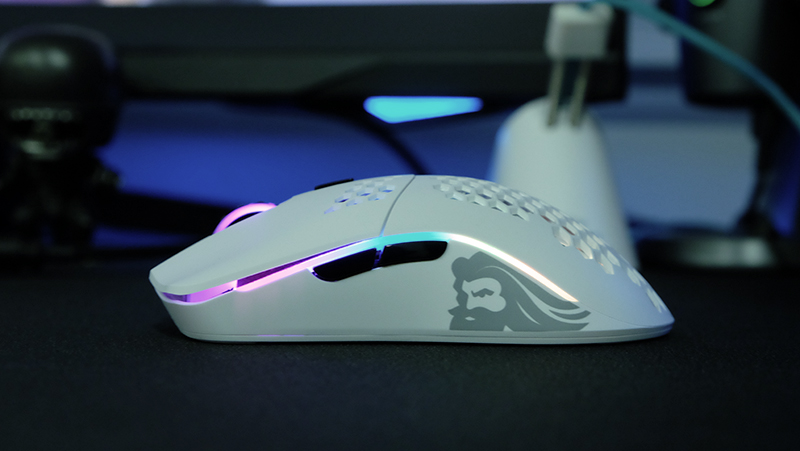 That aside, the honeycomb chassis feels remarkably solid. In fact, it's one of the most robust mice I've handled in recent times, and there is zero flexing or creaking when pushing in on the sides or bottom. Judging from my review unit, it sure feels like Glorious has improved the build quality since the Model O. However, there have been reports of quality control issues, and I personally know of someone whose mouse's scroll wheel began to squeak after a few days, so your mileage may vary.

Another change coming from the Model O is the sensor. This is Glorious' own proprietary sensor that it developed in collaboration with PixArt, and the company says it's specially optimised it for low power draw. The BAMF sensor, as Glorious is calling it, tracks up to 19,000DPI and 400IPS, and is also capable of a 1,000Hz polling rate. Unsurprisingly, tracking in-game is flawless, with no noticeable acceleration or jitter. Wireless performance is similarly excellent, and not once did I experience any interruption or lag. 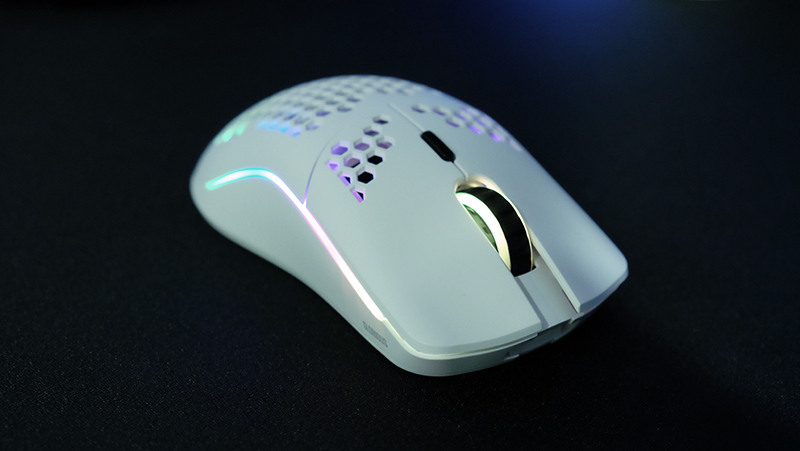 And while the Model O was originally a driverless mouse, the Model O Wireless now supports Glorious' new Glorious Core software, which lets you customise the DPI in increments of 10 and also remove any sensitivity stages you don't need by dragging them off the slider bar. A helpful colour-coded DPI indicator at the bottom of the mouse also lets you quickly see what DPI stage you're on. You can also tweak the RGB lighting effects in the software, but there doesn't seem any way to adjust each of the three zones independently. The software also allows you to set different brightness levels for wired and wireless modes, which is really useful.

Glorious Core also lets you adjust the lift-off distance and debounce time, so you can tweak these to suit your preferences. However, I had trouble getting the software to detect the mouse at first, and the only fix I found was to run it in administrator mode. 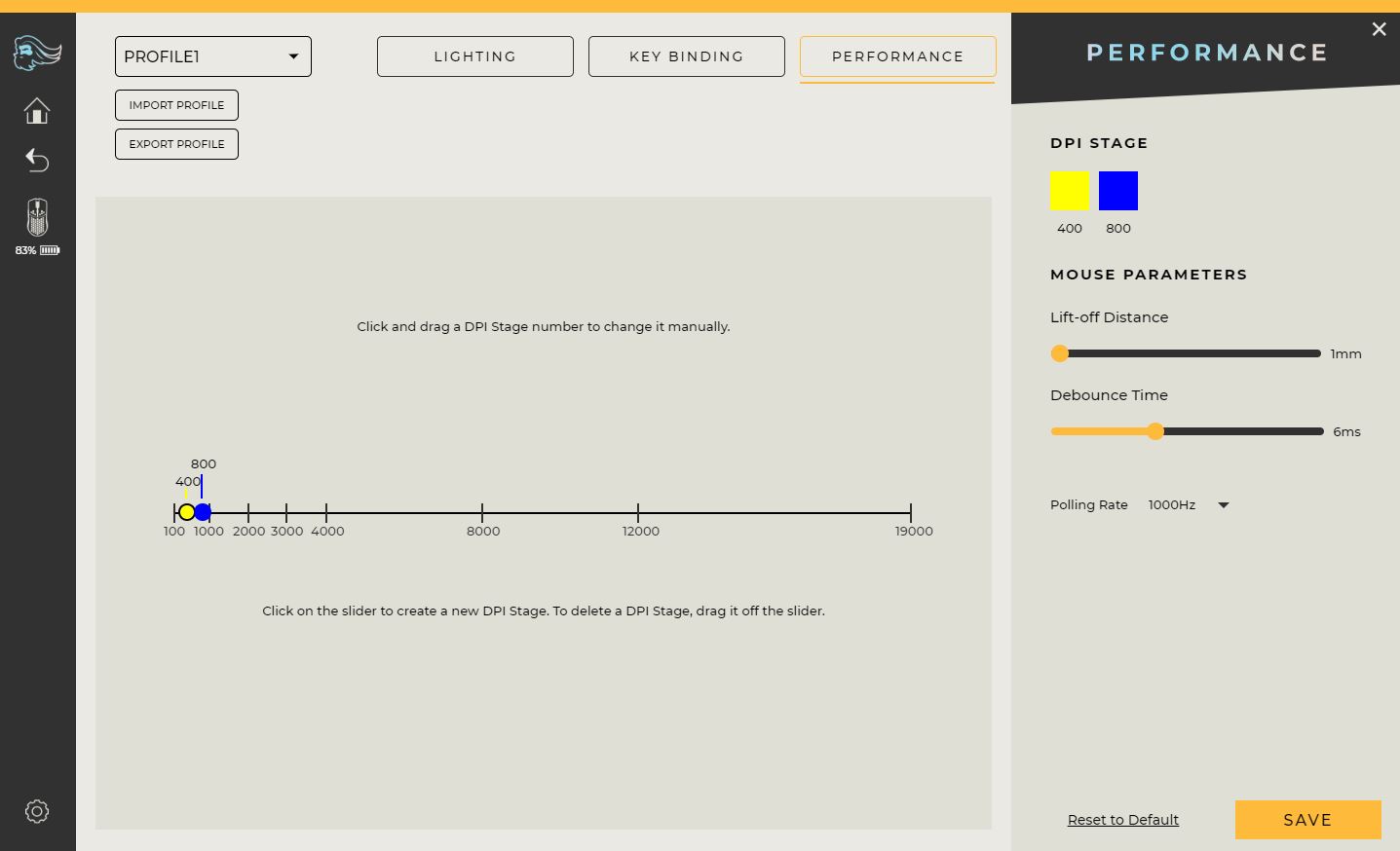 Battery life is rated for up to 71 hours without RGB lighting, but that drops drastically once you turn the lights on. At 100% brightness, battery life dropped by a good 60% in 10 hours, so you'll likely want to keep the lights off if you don't want to be charging too often. The charging cable is a flexible, paracord-style USB-C Ascended cord, which is super soft and supple. However, despite the reversible nature of USB-C, the charging cable only inserts one way because of the shape of the cutout, which I find to be slightly odd. It seemingly defeats the purpose of USB-C, and I've accidentally inserted the cord the wrong way before when I wasn't looking. There is also a USB extender dongle that lets you bring the wireless dongle closer to you, and it has a rubber base that keeps it in place, which is a nice touch. 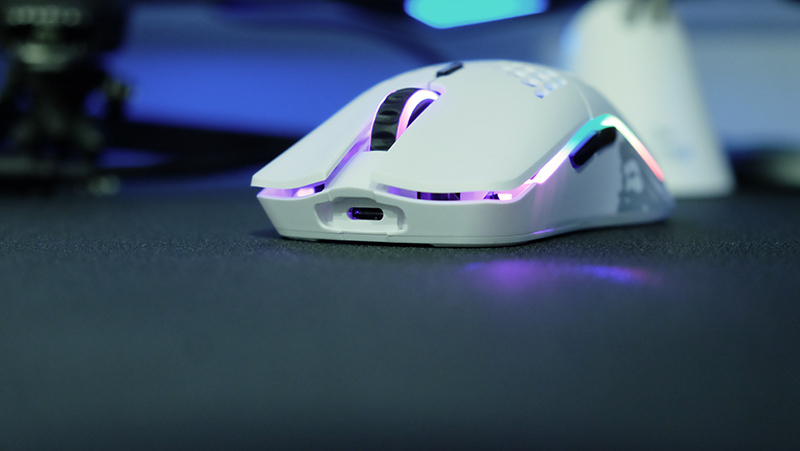 The Model O Wireless is a solid wireless gaming mouse, especially when you take into account its affordable S$129 price. It's not suited to those who have smaller hands, or if you dislike a flat, low-profile mouse, but its shape is otherwise quite accommodating to most grip styles. Potential quality control issues aside, the Model O Wireless offers great value for money. If the price of the G Pro X Wireless Superlight is making you hesitate, you may want to consider Glorious instead. It is available locally from Xtreme Solution or at their Lazada store.

Write a Review
Compare This | Specifications
Solid build quality
Flawless optical sensor
Excellent bang for your buck
Lag-free wireless performance
No independent lighting zones
Odd clicking noise in scroll wheel
USB-C connector can only be inserted one way
Our articles may contain affiliate links. If you buy through these links, we may earn a small commission.