Note: This article was first published on 3 June 2019. 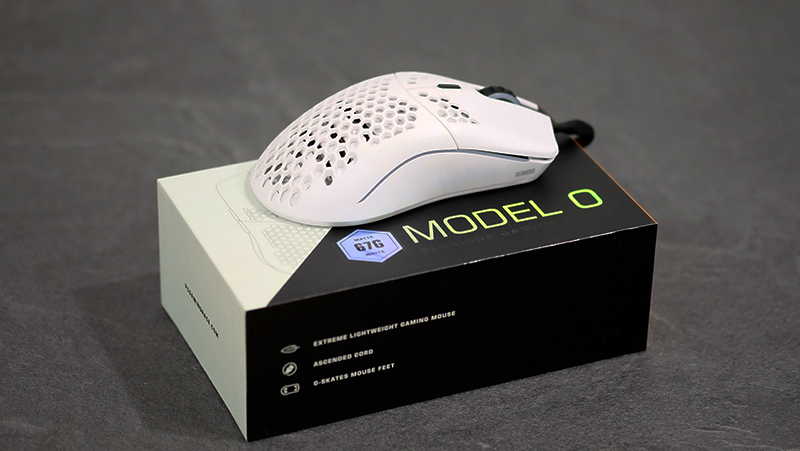 Glorious is probably one of those companies you've never actually heard of. Technically known as Glorious PC Gaming Race, they've got the feel of one of those small outfits that started out as a passion project by gamers who really wanted to deliver good and affordable products that their fellow gamers would want to buy.

Well, you should know who they are now, because the Glorious Model O gaming mouse may just be one of the best mice I've ever used. Mind you, this is a company that has never made a mouse before, so this is a truly impressive debut. Far more established brands have pumped out mouse upon mouse in a single year, and still, none have come close to the Model O.

I first stumbled upon Glorious when I was looking for a good extended desk pad. The Glorious 3XL mousepad I ended up buying didn't disappoint me, and the company soon expanded to offer the Glorious GMMK, a modular mechanical gaming keyboard. Elsewhere, it also sells really good wooden wrist rests and the Trident, a nifty headphone holder that you can stick to the bottom of your table or the back of a monitor. 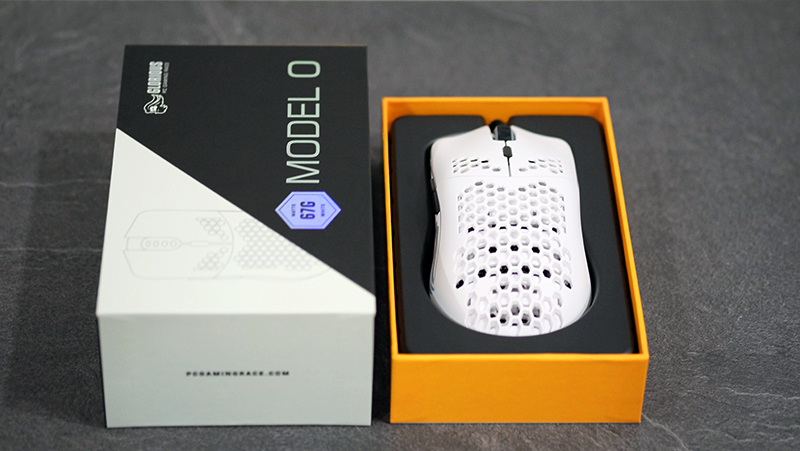 So yes, Glorious has a pretty good track record in my books. But a mouse is an entirely different matter. It's a market that's super saturated and competitive, and which consumers can also be really critical about. Glorious is a young company hoping to compete with the big boys, so it's quite a pleasant surprise that it's done so well.

However, much of the Model O's success appears to stem from the fact that Glorious has cribbed the best ideas from various players and basically put them together into one mouse. As a result, the Model O is not particularly original or revolutionary, but it is a stunningly good mouse that may just shake up the gaming mouse market. After all, you don't always have to come up with a new idea to make a great product.

The Model O is basically what would happen if the Finalmouse Air58 and Zowie FK1 had a baby together. The similarities to the Air58 are unmistakable, with the same honeycomb shell and lightweight, flexible cable. However, given that the size and shape are nearly the same as the FK1, it's also a bit flatter than the Air58, so you'll like it if you prefer low-profile designs.

This is a medium-sized mouse that will suit both palm and claw grips, although it definitely favors larger hands if you want to go with the latter grip style. My hands measure just 16.5cm from palm to fingertip, so the palm grip is the one that works best for me. Of course, your mileage may vary, but I think the mouse has a comfortable, ambidextrous shape that should work for most people.

Like the Air58, one of the biggest selling points of the Model O is how light it is. At 67g for the matte version (68g for the glossy), the mouse is 9g heavier than the Air58. The reason for this is obvious – while the Air58 has perforated sides as well, the Model O has solid side grips where it stamped its branding. 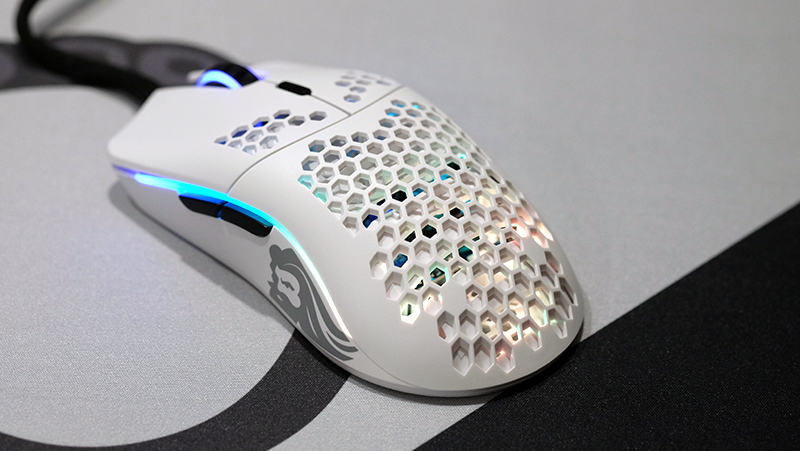 However, the difference in handling is minuscule, and the 67g Model O still feels much more nimble than even the Logitech G Pro Wireless, which by the way is already super light at 80g. And compared to the 99g Logitech G304, which has been my daily mouse for a while now, the difference is even starker. I get that some people prefer heavier mice because they think it affords better control, but I still fall firmly into the camp where lighter is always better, especially in games that require you to constantly flick to targets.

The Model O is equipped with four G-Skates mouse feet, and replacements are readily available to buy on their website. I have no complaints about the feet, and they glide smoothly over my cloth pad with no problems at all.

More importantly, build quality is excellent, and there don't seem to be any issues despite the honeycomb shell (oh no, trypophobia!). Even after pressing down on the sides and back of the mouse, there's no discernible flexing or creaking, although it's possible that there could be minor variance with each unit. Either way, my unit seems solid, and I'm also happy to see that Glorious chose to separate the mouse buttons from the main shell, which is better in terms of giving a more consistent experience when clicking and when it comes to durability as well. 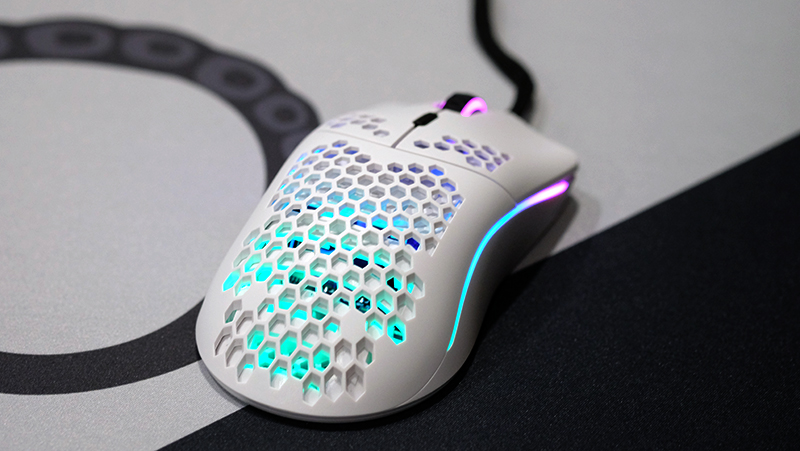 The honeycomb design exposes the internal circuit boards of the mouse though, so you don't want to spill anything on it. You're probably worried about dust build-up over the long-term as well, and that's definitely a valid concern. It seems like it might be easy enough to just get a blower to clean the mouse out, but I haven't had the mouse for long enough to say how much of a problem this will eventually be.

The mouse buttons feel good also, with nice, crisp feedback. At the time of writing, there's a firmware update available that reduces the click delay, so you should definitely apply that before using the mouse. The software will also let you further reduce the debounce time to as low as 4ms, and I haven't experienced any double clicks as a result of this. If that does happen to you though, you can just pick a higher value.

Finally, the rubberized scroll wheel comes with deep grooves, which makes it easier to manipulate. This is an improvement over the haiku lettering on the Air58, which could also have used firmer and more well-defined steps. The Model O has no such issues, and I could clearly feel each individual notch when playing with the wheel.

The Model O is available in four different color and finish combinations, including matte and glossy finishes in both black and white. I have the matte white version, and it does a great job of resisting the build-up of dirt and grime over long hours. If you have sweaty palms, please go for the matte models. 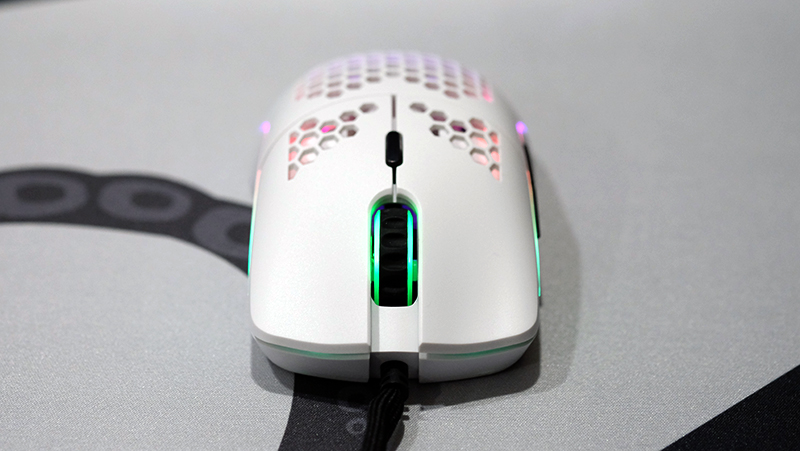 The cable, which Glorious calls the Ascended Cord, kind of looks like a paracord cable. Either way, the fabric is really flexible and there's almost zero drag. In fact, it's so light that I don't think you'll need to use a mouse bungie with this mouse. However, it feels like the Finalmouse Air58 has a slightly more supple cable, but I'm really just nitpicking here. 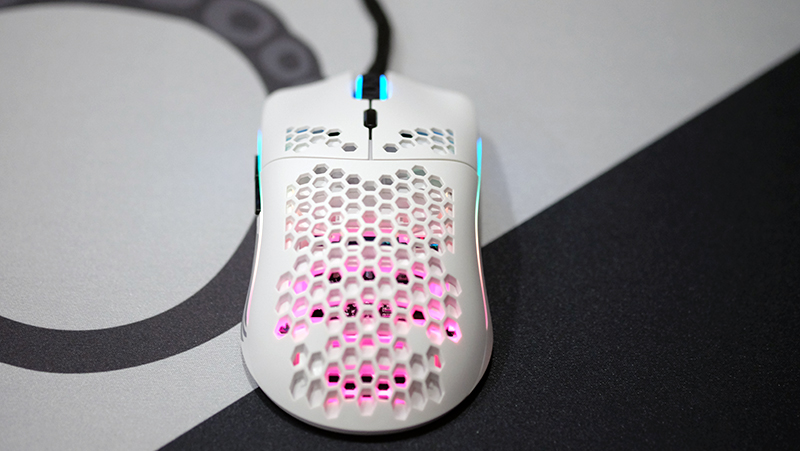 The sensor is a Pixart PMW3360 optical sensor, which is still one of the best sensors around right now. It has no jitter or acceleration, and a low lift-off distance of around 1mm. I was also unable to make the sensor spinout even while swiping really fast, so you should have no issues even if you game at low sensitivities.

The Model O can be configured with values between 400 and 12,000DPI. The software also lets you save up to six DPI stages, a big upgrade from the Air58 which has no drivers and limits you to 400, 800, 1,600, and 3,200DPI. Both mice have a DPI buton below the scroll wheel, but the Model O also has a color-coded indicator at the bottom so you can see what DPI stage you're on. This feature has been present on Zowie mice for a while now, and it's another example of Glorious learning from what the competition is doing. 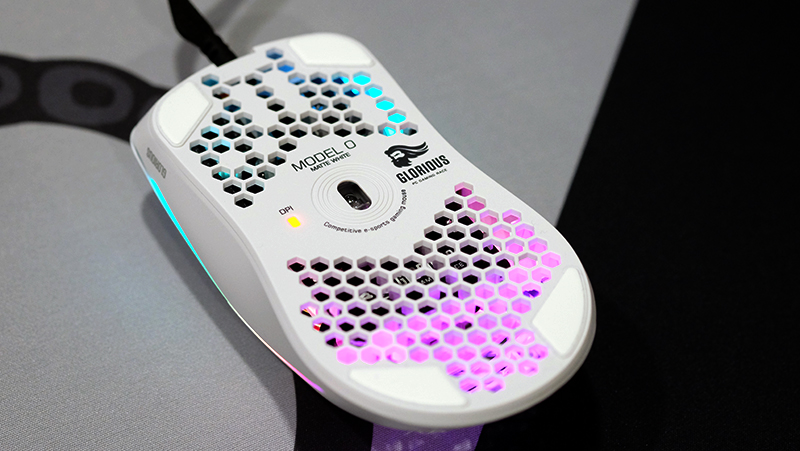 Alternatively, the Model O fully supports plug-and-play operation as well, if you don't want to bother with any software.

The mouse also comes with built-in RGB lighting, and Glorious says this is the lightest RGB mouse you can get today. The driver software is pretty simple, and while it's intuitive enough to use, it definitely doesn't have the polish of Razer's Synapse 3 or Logitech's G-Hub. Still, it has advanced options for adjusting the lift-off distance (LOD), debounce time, and double-click speed, which many other drivers lack. More importantly, it supports a 1,000Hz polling rate out of the box (you can change this in the driver also), whereas the Finalmouse Air58 is oddly limited to just 500Hz with no way to change it short of a third-party software. 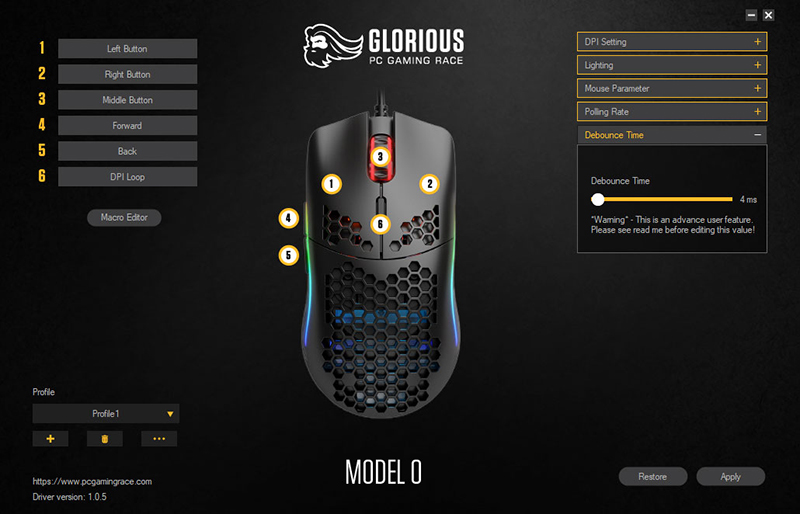 You can also pick from a selection of eight different lighting presets. The default is Glorious Mode, which is basically the company's name for a spectrum cycling effect. The LEDs are fairly bright and vivid, and the mouse has lighting trails along its sides and the scroll wheel. Furthermore, the honeycomb shell comes into play in an interesting way here, and you can see the innards of the mouse light up really nicely.

My biggest gripe is with the lighting transitions, some of which could be a bit smoother. There's also no way to customize individual lighting zones on the mouse, but that isn't a super big deal.

Write a Review
Compare This | Specifications
Extremely lightweight design
Good build quality
Flawless optical sensor
Super flexible cable
Great value for money
Available in both matte and glossy finishes
Some lighting transitions could be smoother
No independent lighting zones
Honeycomb design may lead to dust buildup inside
Our articles may contain affiliate links. If you buy through these links, we may earn a small commission.
Sponsored Links