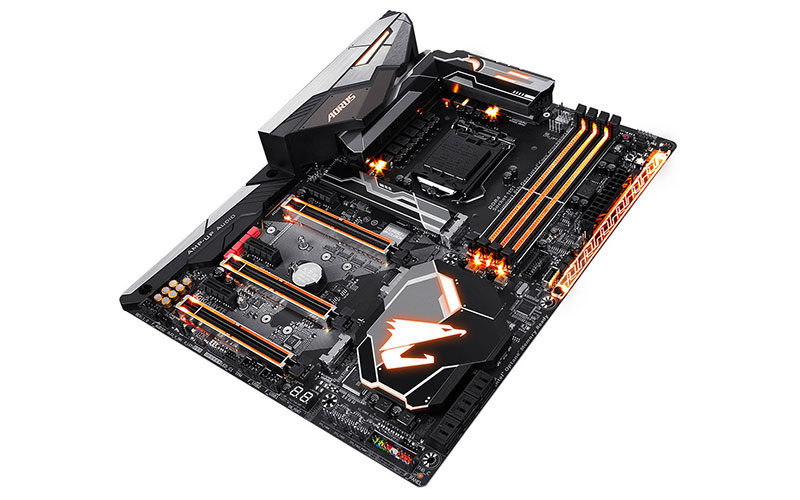 The Gigabyte Z370 Aorus Gaming 7 is the company’s flagship Intel Z370 motherboard. It comes with a decent selection of features, boasting generous storage expansion and connectivity options, customizable LEDs, and a beefed-up onboard audio solution.

It’s possible that Gigabyte may release a Gaming 9 board to plug the gap in the ultra-high-end segment, but until then, the Gaming 7 is the most feature-rich Z370 board you can get right now from Gigabyte.

That said, the laundry list of features reads more like that of a balanced all-rounder rather than that of an enthusiast-oriented model. For instance, there are no auxiliary power connectors for the CPU or an LN2 mode switch for serious overclocking. You also won’t find things like DIP switches to disable select PCIe or DIMM slots when you’re troubleshooting or tweaking your system. However, what the board does have is a solid selection of core features that will prove far more useful to a wider swath of users. This decision is reflected in the fairly reasonable S$435 price tag, and you get everything you need, plus a little icing on the top.

For instance, there may not be any liquid cooling channels carved into the VRM heat sink, but you do still get eight 4-pin fan headers that can be configured to work in both PWM and voltage regulation modes. These headers are strategically spaced out around close to the edge of the board, so you don’t end up with wires running out from the middle of the PCB.

That said, you technically only have seven available headers, as the header next to the EPS12V connector is taken up by the tiny, built-in VRM fan that can spin up to 6,000RPM. This isn’t that common a feature on a motherboard, and it’s designed to turn on only in the most demanding of situations, such as when temperatures rise above 90°C. 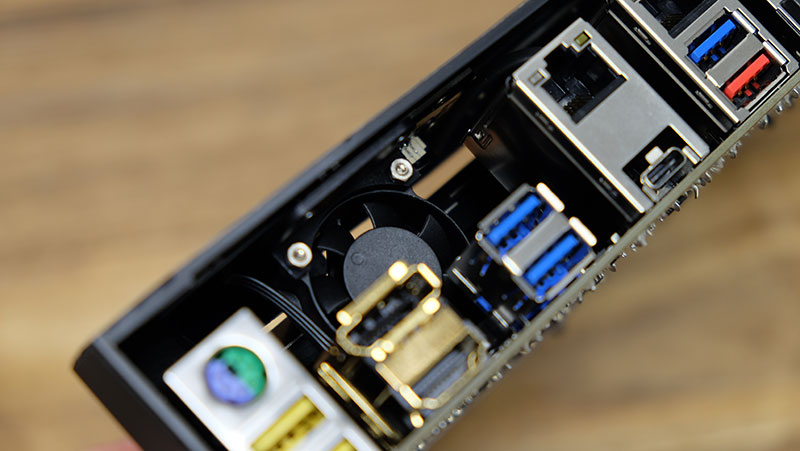 However, if you want to have the fan running most of the time, you can probably set a custom fan curve in the BIOS itself. In fact, Gigabyte’s Smart Fan 5 controls let you define a temperature threshold below which your case fans will stop spinning for a more quiet experience.

The fan header located beside the 24-pin power connector is also a high amperage header that supports up to 3A. And together with a second header located at the bottom right of the board, it doubles up as a dedicated water cooling pump header as well.

I mentioned earlier that this board lacks certain features for more extreme overclockers, but that doesn’t mean it’s a slouch either. It is equipped with an 8+2-phase power design for the CPU and iGPU, and uses Intersil’s latest digital PWM and Smart Power Stages to supply up to 60A for each of the eight phases for the CPU Vcore.

These eight phases are achieved using phase doublers though, so there are really only four true phases. You also get all the essential buttons, including ones for power, reset, and clearing CMOS. However, I’d have preferred to see the CLR_CMOS button located at the rear I/O instead, as it’d make troubleshooting a lot easier once you’ve completed your build. In addition, you’ll find a one-click OC button in the same area for a quick and hassle-free overclock. 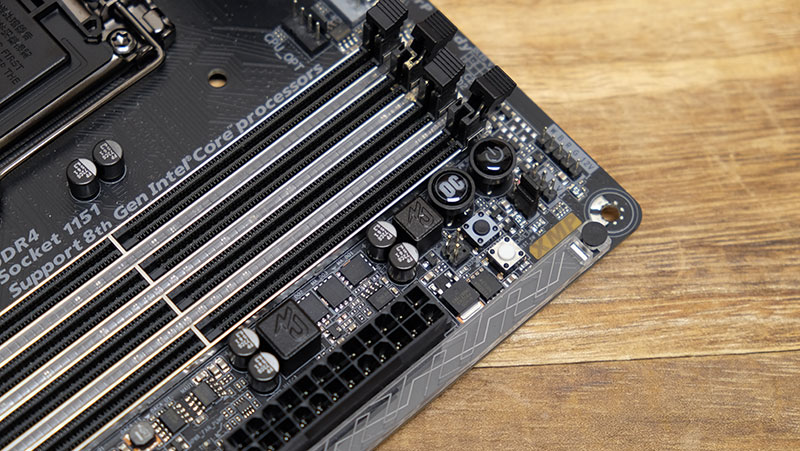 The Gaming 7 features three full-length PCIe 3.0 x16 slots, and supports up to two-way SLI or three-way CrossFire. As with most boards today, all three slots have been reinforced with metal to ensure that they stand up well under the weight of the heaviest graphics cards.

Gigabyte says it uses a one-piece stainless steel design with additional anchor points for an even stronger implementation. 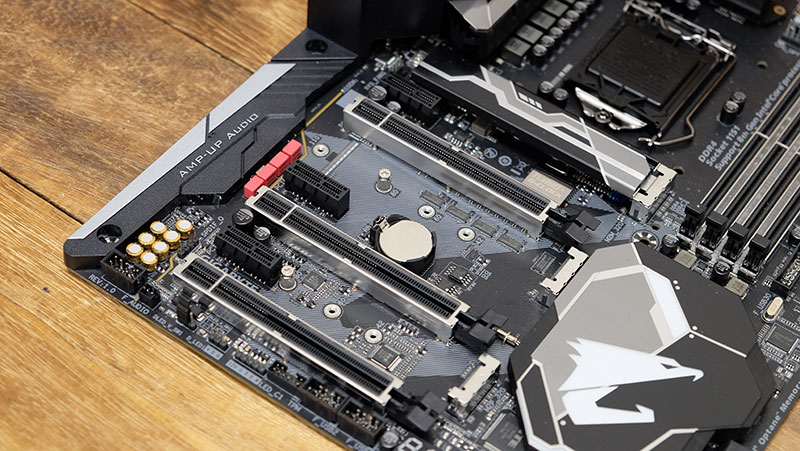 An extra large gap sits between the first and second PCIe 3.0 x16 slots, which is good news for two-way setups as it provides more room for cooling the first card, and makes space for larger and thicker cards. The slots will run in x8/x8 mode when both are filled, while the third slot draws on four lanes from the chipset. This means that it shares bandwidth with all three M.2 sockets and any other device connected to the PCH, and will drop to x2 mode if the third M.2 socket is occupied.

The latter will probably be the most egregious case of bandwidth sharing on this board for enthusiasts, but most folks probably aren’t going to have more than two M.2 drives and two graphics cards at once.

Similarly, the first M.2 socket also shares resources with two of the six SATA 6Gbps connectors, but I don’t see many people having more than four SATA drives. And speaking of the SATA ports, they’re thoughtfully located a little closer to the bottom edge of the board, so your graphics card doesn’t end up blocking access to them. 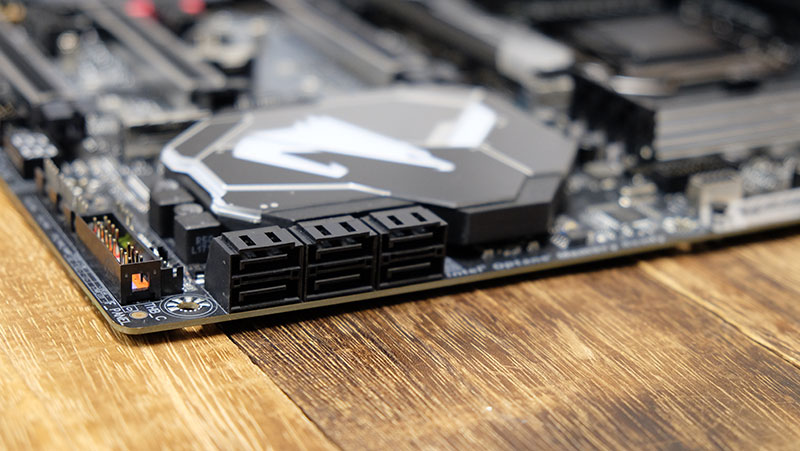 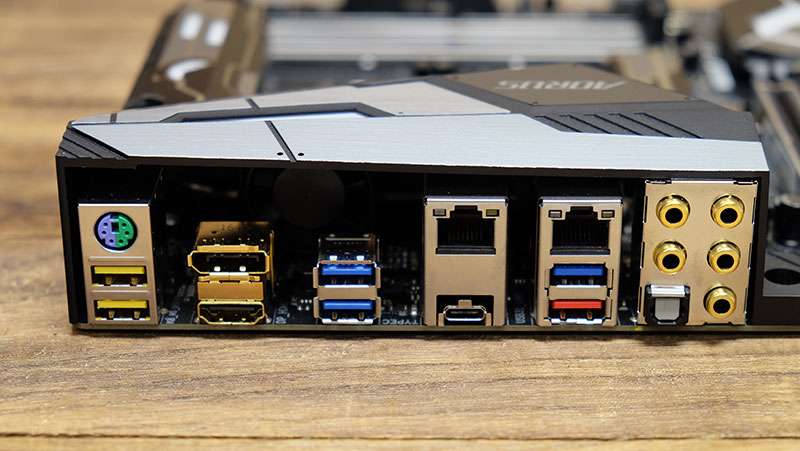 The topmost M.2 socket is equipped with a Thermal Guard that looks inspired by MSI’s M.2 Shield. The M.2 drive is shielded by a metal cover that acts as a passive heat sink for the tiny SSD, which is particularly important given how close it is to heat-generating components like the CPU and GPU.

That said, it’s a little disappointing to not see the other two sockets receive the same treatment.

Finally, the board also has a couple of nice features that tend to slip under the radar. This includes an ESS Sabre 9018 DAC for onboard audio, a second Ethernet port powered by the Killer E2500 Gigabit Ethernet controller, and an internal USB 3.1 (Gen 2) header that feeds a front-panel USB-C port. To cap things off, you can replace the overlay at the top right with your own 3D-printed design, which will change the lighting pattern of the LEDs underneath.