It is now official. AMD has acquired graphics chipmaker ATI in a 5.4 billion dollar deal (pending approval from shareholders and regulatory bodies), instantly creating a combined entity with up to US$7.3 billion worth of sales in the past year and employing an estimated 15,000 workers. While rumors regarding this merger have surfaced sporadically in the past month, it was evidently a surprise to the key players when rumors became reality. Intel and NVIDIA, affected most by this new entity, had to scramble to respond to the acquisition and not with the usual, prepared statement.

So far, NVIDIA has chosen to put a positive spin on the deal , by claiming rightly that this would leave it as the last graphics and core logic chipmaker standing with untrammeled access to both Intel and AMD. Intel however has been rather mum about the whole deal, but there is already unconfirmed word that Intel will not renew ATI's chipset bus license , giving credence to NVIDIA's confident outlook. AMD is still very reliant on NVIDIA's motherboards for its processors though we probably will see AMD putting more emphasis on its own platform, with greater CPU-GPU integration and even integrated physics processing likely to result from this acquisition. It's hard to say whether this development will definitely push NVIDIA closer to Intel, since at the moment, they are both rivals in the motherboard chipset segment. But official NVIDIA SLI support for Intel's motherboards does seem more likely than before. Overall, it looks like AMD has more to gain than ATI from this 'marriage' since adding graphics and motherboard chipsets will allow it to compete better against Intel's inclusive platform.

For now, the discrete graphics situation should remain unchanged, especially since this deal is only due to be completed by the end of the year. Furthermore, AMD has mentioned that both entities would likely operate exclusively for some time to come in the best interests that both AMD and ATI fulfill their upcoming projects without disruptions. Of course for future projects, we can begin to see some collaborative efforts and that can only mean some interesting platform technologies to come, but at the same time, we hope they stick to their current philosophy of encouraging open standards to best benefit all manufactures and consumers. For the near timeline ATI plans to unveil its Radeon X1950 series of cards next month. Though HDCP support availability on it is still not very apparent, it does hope to better compete with rival NVIDIA's high-end GeForce 7950 GX2, but don't bet on it beating the duo-card combo yet. While ATI can hope that some of AMD's chip expertise may filter down to its graphics chipsets, the truth is that the present ATI generation is mostly on the back foot compared to NVIDIA. The upcoming enhancements found in the Radeon X1950 series may well succeed, though we feel that even if the hardware proves to be capable, its impact will be limited. This round of discrete GPUs has gone to NVIDIA and nothing is more reliable a barometer than the retail market and the preferences of vendors and consumers.

As a testimony of its attractiveness, for the umpteen time, we have yet another of the popular GeForce 7900 GT in our labs for review. Again, this is a non-standard version that uses a Zalman cooler to achieve both quietness and low temperatures. Gigabyte has also overclocked it to ensure that the GV-NX79T256DP-RH will stand comparably against the many competitors in the market. Here then is it technical specifications: 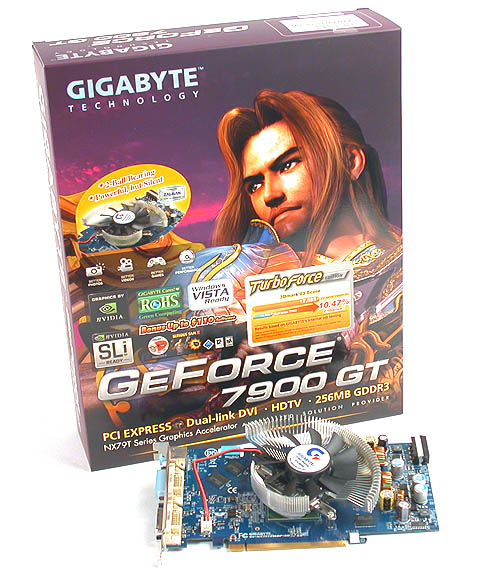