Gigabyte was one of the first few NVIDIA add-in card partners to announce their GeForce GTX 900 products, in particular, the top-end GTX 980 cards. Like most manufacturers, Gigabyte took the opportunity to update some of its proprietary technology and features to coincide with the introduction of second generation Maxwell architecture. As a result, the company's GeForce GTX 980 G1 Gaming graphics card has a number of features that will certainly delight even the most nitpicky end-user! The most obvious is its redesigned Windforce 3x cooling system; hence, without further ado, let's take a closer look at the card! 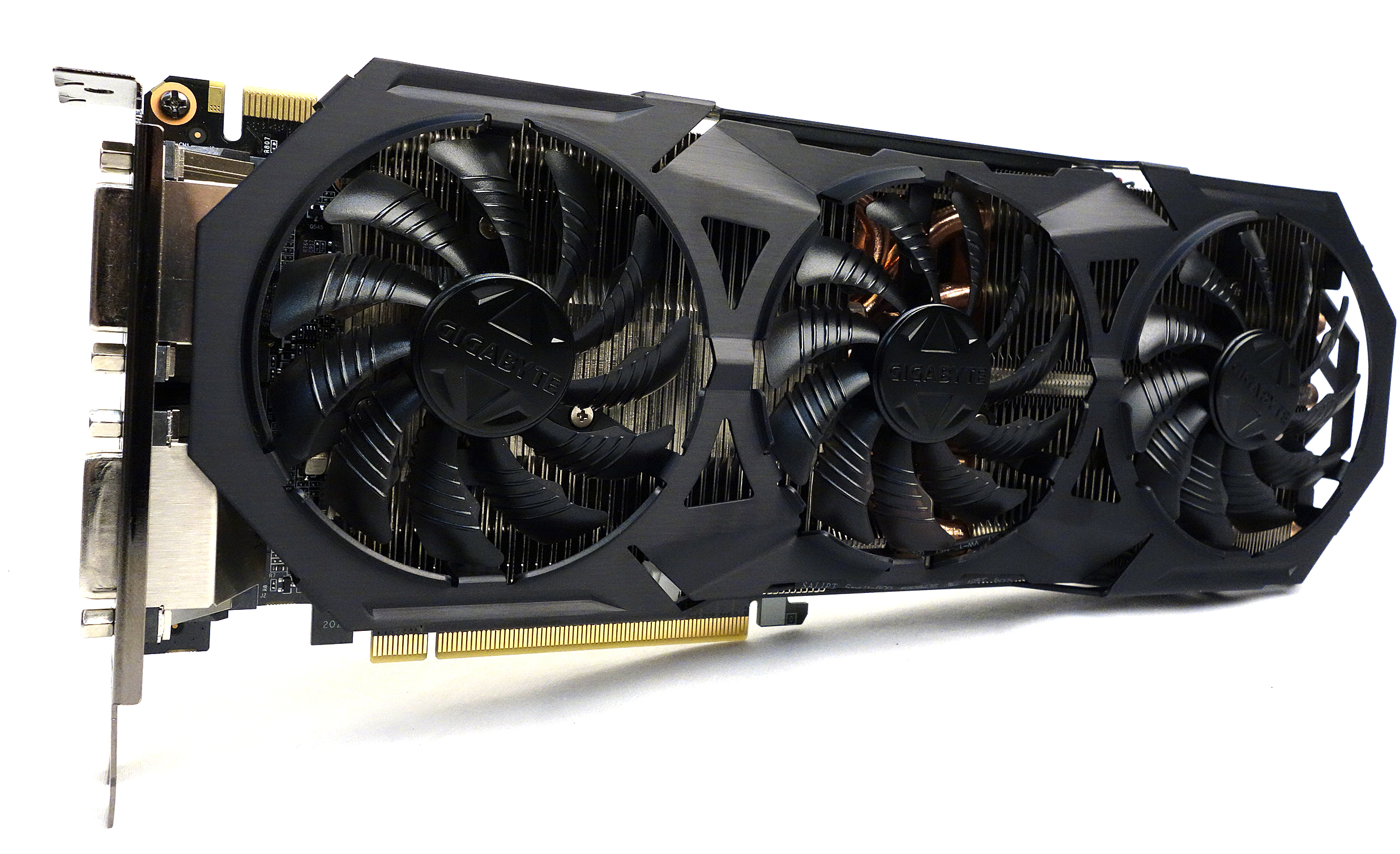 As can be expected of a custom designed graphics card, the GTX 980 G1 Gaming is overclocked reasonably. The reference GTX 980 card has its base GPU clock set to 1126MHz and has a maximum Boost clock of 1216MHz. Gigabyte's gaming card is clocked well beyond that at 1228MHz and 1329MHz respectively!

In order to cool its overclocked GM204 graphics core, the card's Windforce 3X has been upgraded to handle 600W of heat output. In comparison, the older Windforce 3X, featured on the Gigabyte GeForce GTX 780 Ti Windforce 3x OC, has a heat flux of 450W. For heat dissipation, the cooling system has a total of six copper heatpipes; five 8mm ones and a single 6mm one. The blades of its three cooling fans have been upgraded for better airflow, and they allegedly boost the cooling performance by 23%. The finstack has a "special fin architecture" that promotes airflow and increased surface area for improved heat dissipation. The usual suspects include the RAM heatsink, to cool its 4GB of GDDR5 memory modules, and the "Triangle Cool" fin structure of its heatsink. In spite of these upgrades, the card has a svelte, two-slot profile. 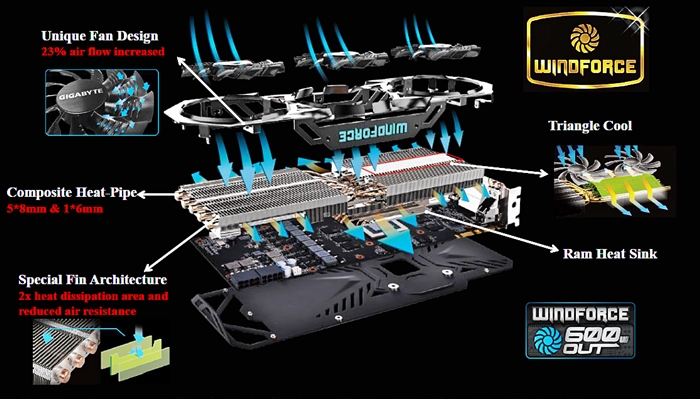 The card also features a backplate with cooling vents laid out in an intricate pattern and you'll also notice there's the eye logo of its G1 Gaming branding. The plate extends slightly beyond its custom PCB to form some sort of a protective cover for the heatsink and copper heatpipes of the Windforce 3X system. 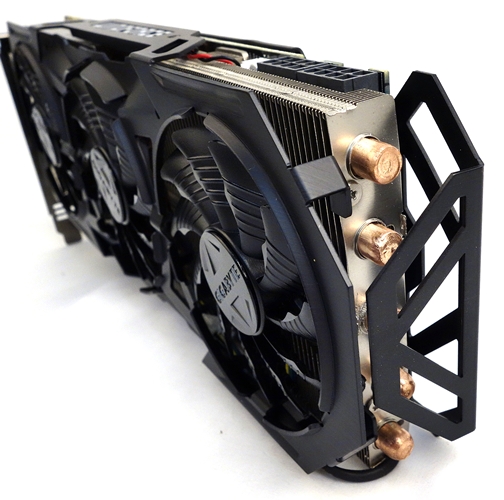 As a result of its re-tooled Windforce 3x 600W finstack and cooler, the entire length of the card has been extended to 299mm. In comparison, the Gigabyte GTX 780 Ti card measures 280mm, while the reference GTX 980 is 270mm long. 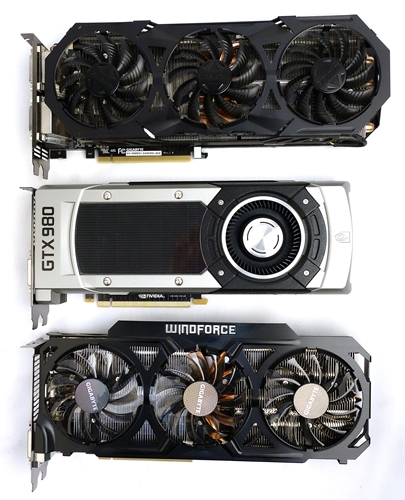 The video connectivity options of the Gigabyte card break away from that of the reference GTX 980. The latter's ports consists of one dual-linked DVI-I connector, one HDMI 2.0 port and three DisplayPort 1.2 connectors. In addition to those, Gigabyte manages to squeeze in an additional dual-link DVI-D connector. Such an arrangement is possible due to its proprietary Flex Display technology, which allows users to have more options when they opt for multi-display configurations. The company understands that some gamers may not own displays that support DisplayPort connectors; as a result, the additional DVI port of the Gigabyte card will allow the gamer to enjoy a "4K surround" display with a pair of DVI displays, and one that supports DisplayPort technology. For a "full 4K surround" experience, a triplet of DisplayPort displays is required. 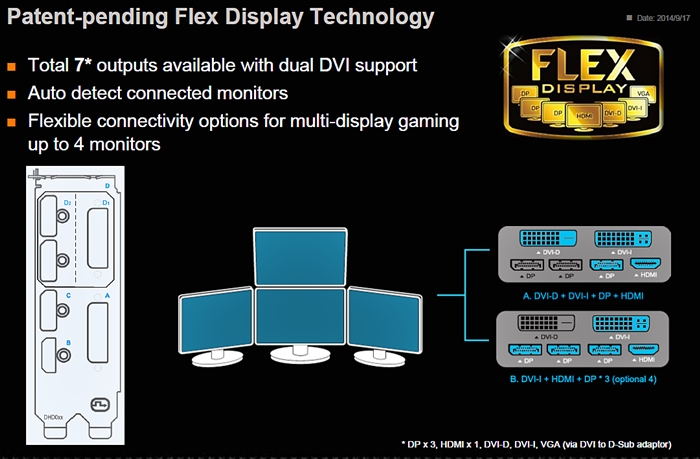 There are also some minor tweaks to the card as it has two 8-pin Molex connectors instead of two 6-pin Molex connectors on the reference card. Gigabyte is definitely expecting a higher power draw from its default overclocks and more if the user intends to overclock it. Thus equipping it with a suitable power connector that helps deliver more power to the card when required is essential. Yet another point here is that the orientation of the power connectors have been reversed. This allows for easier insertion of the power plugs as the heatsink isn't in their way anymore. 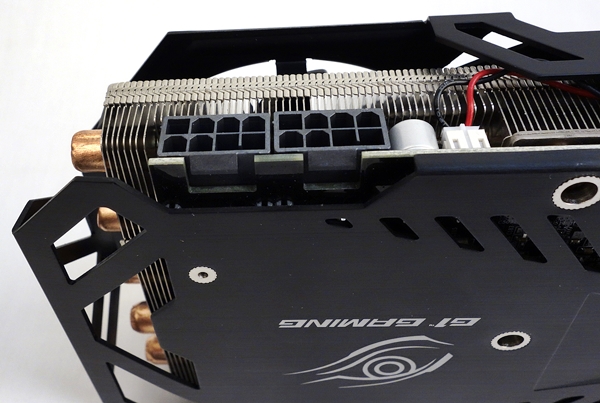 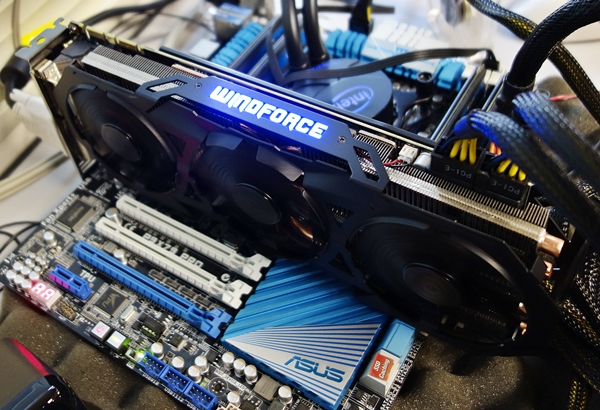 The cards used for comparison are the same ones from our encounters with the reference NVIDIA GeForce GTX 980 card. Since the latest GeForce drivers, i.e., GeForce version 344.16 is meant for the GTX 900 series cards, we can assume, to a certain degree, the results of the two GTX 780 Ti cards are still valid for comparison with the updated results of the GTX 980. All the cards have been listed accordingly:-

Again, here's the subset of benchmarks that we'll be using for our benchmarking exercise since the full performance characteristics have been identified in our original GeForce GTX 980 reference card review:- 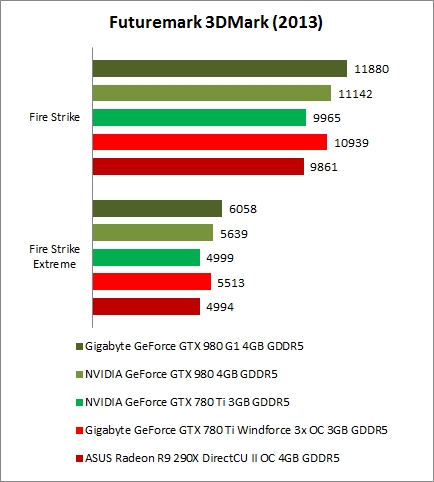 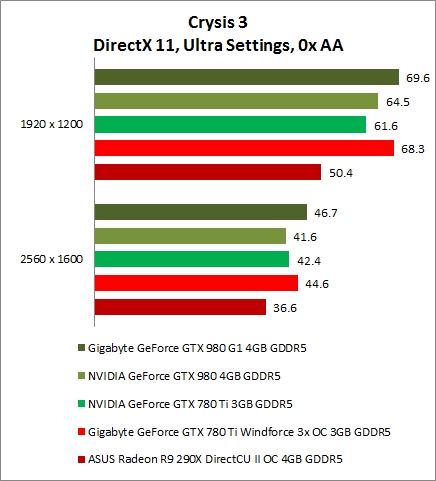 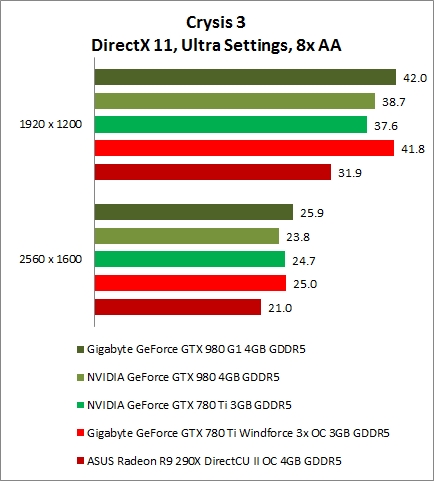 The Gigabyte GTX 980 card was put through two tests within the 3DMark 2013 benchmark: Fire Strike and Fire Strike Extreme. The average FPS recorded during a rendered game scene of Crysis 3 was used as to gauge actual gaming experience. From the results above, the Gigabyte GeForce GTX 980 G1 Gaming took pole positions on all fronts! It even beat its Kepler-based counterpart, the Gigabyte GeForce GTX 780 Ti Windforce 3x by a hair.

The card's overclocking performance was impressive as we were able to hit a high of 1389MHz for its base clock speed, and a rated boost clock of 1490MHz. For its video memory buffer, they were overclocked to operate at 7704MHz. To recap, the out-of-the-box base clock speed of the Gigabyte GTX 980 card is 1228MHz, and has a boost clock of 1329MHz. Its memory modules operate at 7010MHz that is the default clock speed. 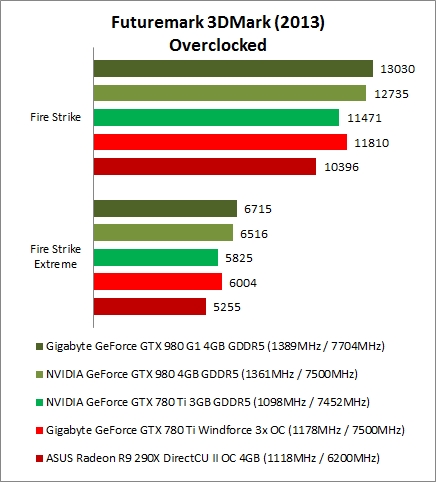 The Windforce 3x cooling system managed to keep the GM204 graphics core operating at a cool 61 degrees Celsius. It appears that the temperature floor, of such high-end air-cooled graphics cards, like the ASUS GeForce GTX 780 Ti DirectCU II OC, and the current Gigabyte GTX 780 Ti card, hovers in the vicinity of 60 degrees Celsius. A liquid cooling system may be needed in order to push operating temperatures below this level. In terms of power consumption, the Gigabyte's power draw of 361W at load is naturally higher than the reference GTX 980. However, it was only marginally increased as it was still a good degree lower than the previous generation cards that all registered power consumption levels of 420W and above. 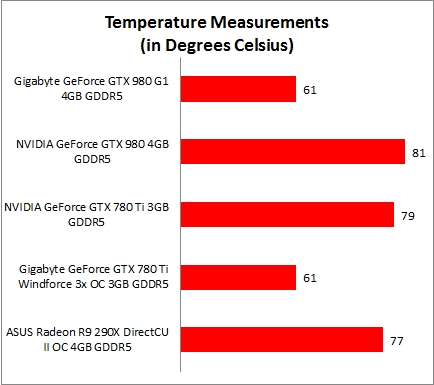 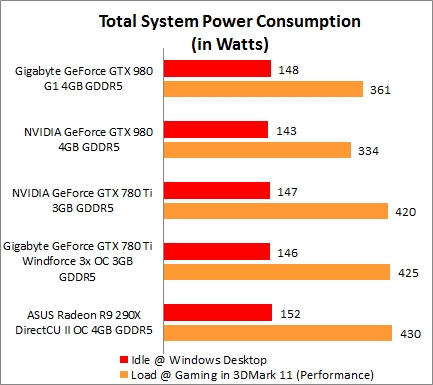 The Gigabyte GeForce GTX 980 G1 Gaming is one that leverages on the strengths and power efficiency of the second generation Maxwell architecture. And this is seen from our tests that it is the fastest single GPU graphics card whose reputation has been burnished with Gigabyte's engineering efforts. From its redesigned Windforce 3X cooling system, to its Flex Display technology that allows for more leeway in multi-display configurations, Gigabyte has clearly taken the pains to distinguish the card from the other custom GTX 980 cards. The Windforce LED lighting too was a nice, finishing touch. However, like we had mentioned earlier, the extended length of the card may cause installation issues. Would-be owners of the new Gigabyte GTX 980 card will have to ensure there's enough clearance in their gaming rig's chassis.

The card is currently available for S$980, which is in line with many high-end graphics cards at launch. Yes, it's expensive, but it's the newest, fastest and probably one of the better custom designed GeForce GTX 980 graphics cards in the market. (And if you haven't noticed, its price matches the model number of the GPU.) 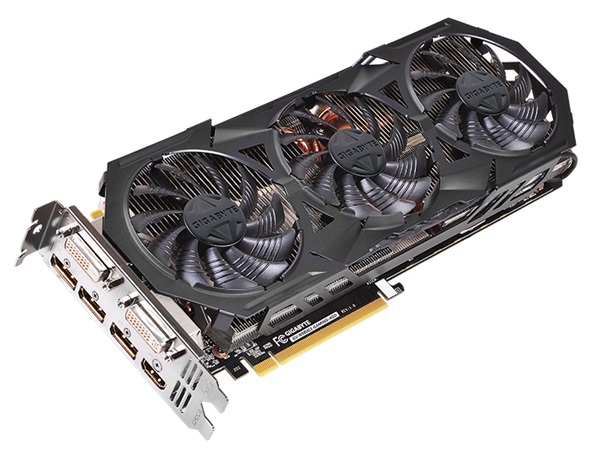 Write a Review
Compare This | Specifications
Overclockable
Efficient and quiet cooling system
Support for Flex Display technology
Expensive
Length may hinder installation in SFF systems
Our articles may contain affiliate links. If you buy through these links, we may earn a small commission.
Sponsored Links