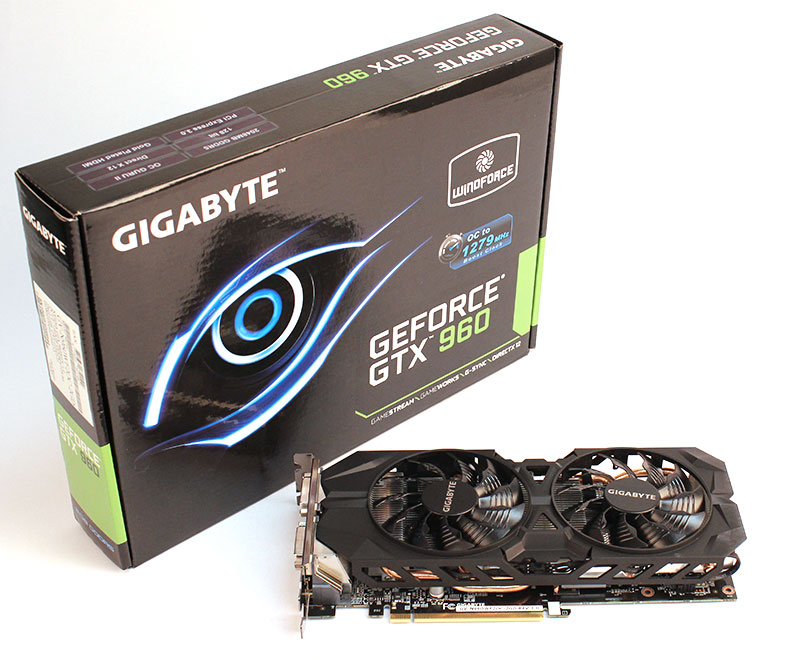 Like the Gigabyte GeForce GTX 960 G1 Gaming, the two-fan Gigabyte card comes with two performance profiles: Gaming mode and OC mode. The card is set to Gaming mode straight out of the box, with a GPU base clock of 1216MHz and boost clock of 1279MHz. In OC mode, the card ramps up slightly to a 1241MHz base clock and 1304MHz boost clock. Its 2GB of GDDR5 video memory is clocked at 7012MHz. 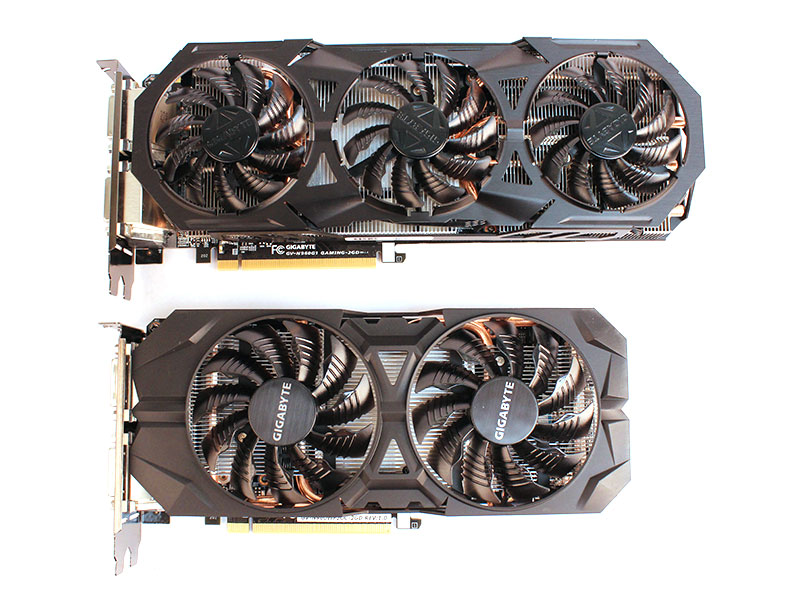 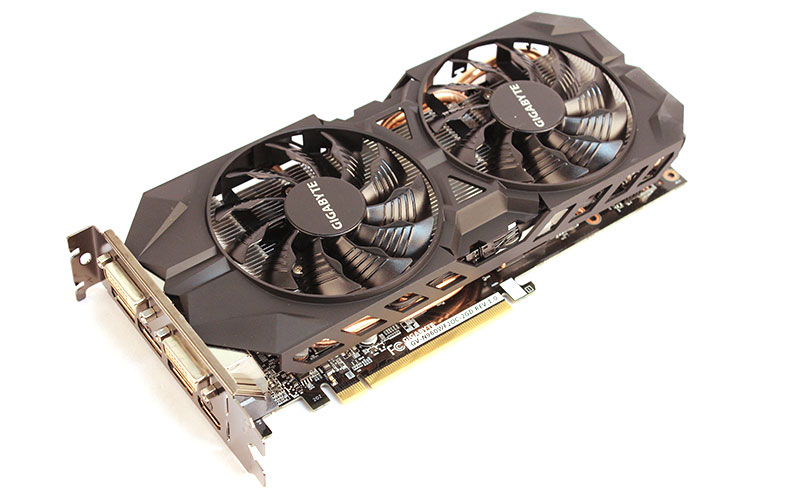 The two 90mm fans sport a unique 11-blade design, where each fan blade has five raised ridges running across its middle and a triangular protrusion. According to Gigabyte, the triangular protrusion helps split air that passes over the fans, and the channels between the ridges in turn help to guide the air smoothly through the fan. 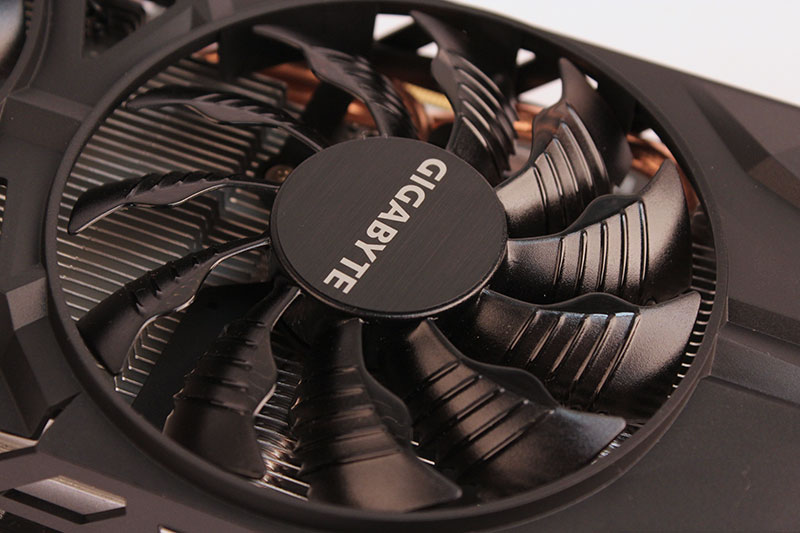 Four 6mm heat pipes are also in direct contact with the GPU to help channel heat away from it – these aren’t the thickest we’ve seen on a card, but they do their job quite well.

This all sounds a bit vague, but it certainly seems to be borne out by the card’s stellar cooling performance, as we’ll see later in the results section. The card is also tuned for silent operation and the semi-passive fans on the Windforce cooler are able to power down entirely when the GPU is idle or under low loads. This ensures as quiet an operating environment as possible, and we weren’t disturbed by the card at all during our tests.

Gigabyte is actually positioning the GeForce GTX 960 Windforce 2X OC 2GB as a cost-effective alternative to its GeForce GTX 960 G1 Gaming. Given its more affordable price, something has got to go, and Gigabyte has chosen to omit the solid metal backplate that we saw on the G1 Gaming. We definitely miss the extra rigidity offered by the metal backplate, but the card isn’t that much worse for the wear - its shorter length means it’s less susceptible to flexing, eliminating the need for the backplate to begin with. 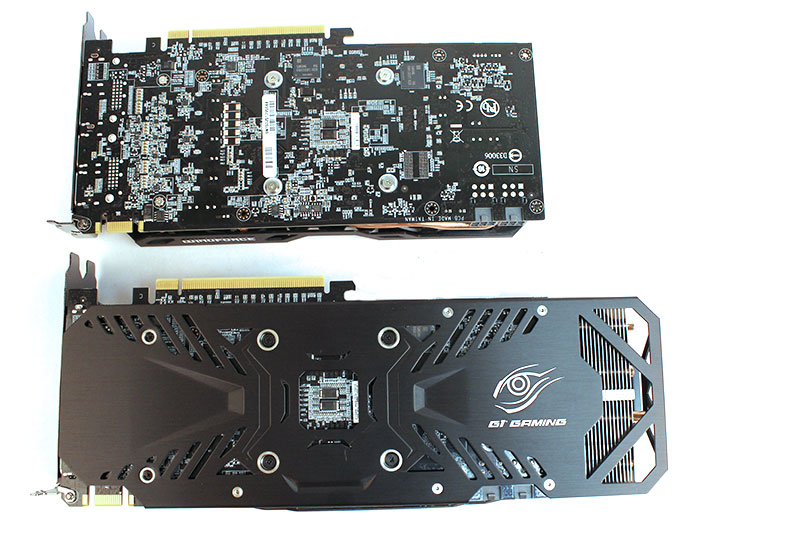 Moving round to the back of the card, we see dual-link DVI-D and DVI-I ports, three DisplayPort outputs and a single HDMI 2.0 port. The card supports Gigabyte’s Flex display technology, which supports up to 4 monitors at any one time using a combination of the various display outputs. For instance, users could combine both DVI ports with a DisplayPort and HDMI port for a total for four displays. This sounds nifty, but keep in mind that it's only useful for your productivity needs and the card (and its GPU) aren't made to handle multi-monitor gaming as it just doesn't have that kind of throughput, nor the video memory capacity.

Finally, the card is powered by two 6-pin PCIe connectors. Gigabyte recommends that you have at least a 400W power supply to run this card, which sounds valid considering the entire system's power needs.

We’ll be comparing the card with other NVIDIA GeForce GTX 960 custom cards from ASUS, Gigabyte and MSI to gauge where it stands among similarly-performing cards. The cards are all listed accordingly below:-

Since the full performance characteristics have already been set out in our original review of the NVIDIA GeForce GTX 960 reference card, we’ll be running a narrower set of synthetic and real-world gaming benchmarks to test the card.

As expected, the results are all very close to each other. The lower out-of-the-box clock speed of the dual-fan Gigabyte card in Gaming mode penalized it in tests against the other cards. The GeForce GTX 960 Windforce 2X OC 2GB has a base clock of 1216MHz whereas its triple-fan counterpart has a GPU base clock of 1266MHz, and a boost clock of 1329MHz – among the highest of the lot – which helps to explain its position near the top of the benchmarks.

In 3DMark FireStrike, the Gigabyte GeForce GTX 960 Windforce 2X OC 2GB was just under 4% slower than its three-fan counterpart, but in Crysis 3, the difference was limited to within three frames of the fastest card. That’s not a difference we’d lose sleep over, especially since the other cards were set to their baked-in OC profiles during benchmarking. Given that the shorter Gigabyte card comes in at 1241MHz and 1304MHz base and boost speeds in OC mode, we’d expect it be easily capable of catching up with the other cards in these gaming tests. 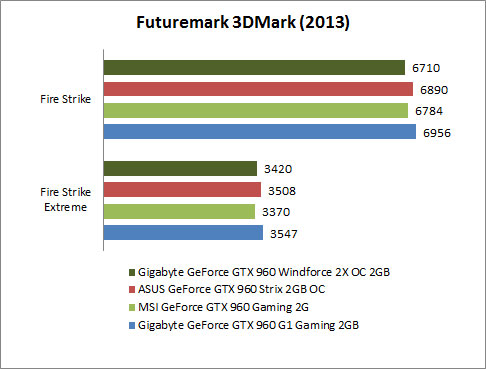 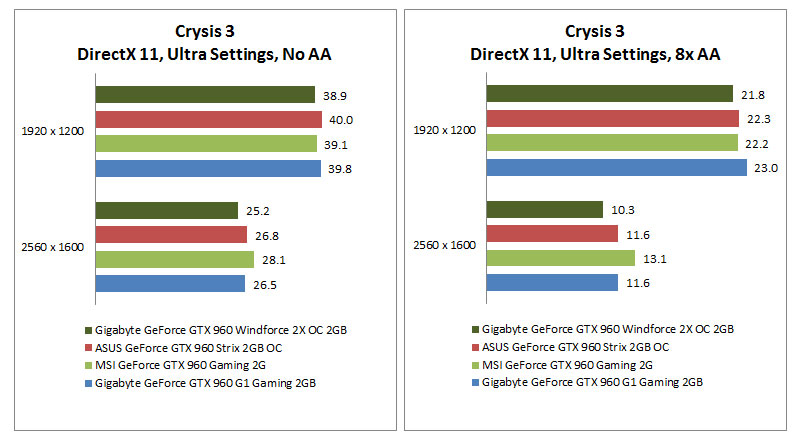 Like its bigger brother, the Gigabyte GeForce GTX 960 Windforce 2X OC 2GB proved to be quite a capable overclocker. We were able to push the base clock speed to 1391MHz before we noticed artifacts in 3DMark FireStrike, 50MHz higher than the G1 Gaming. This translates into a boost clock of 1454MHz. Its memory modules were also overclocked to 7652MHz, the highest out of all the cards here. 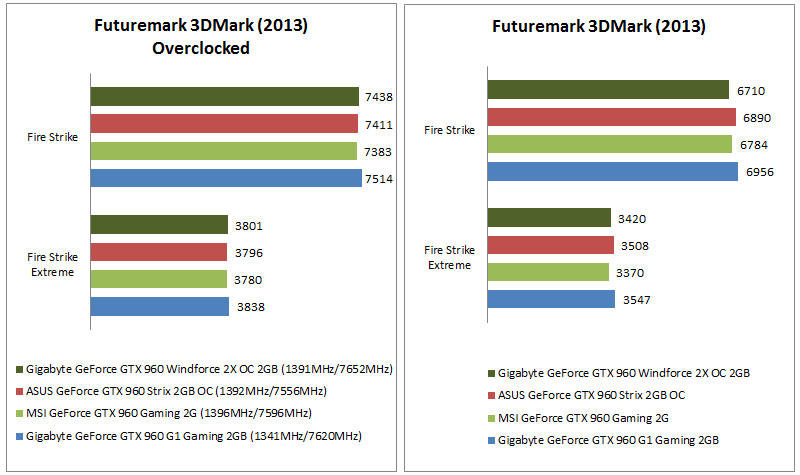 Gigabyte’s dual-fan Windforce cooler powers ahead - or should we say, behind – in our temperature tests. The card peaked at a cool 52°C even after looping 3DMark FireStrike Extreme for a good half an hour. These are really some impressive figures, beating out even the triple-fan G1 Gaming card which sports the same Windforce cooler.

This can probably be partly attributed to the lower clock speeds of the smaller-sized card, but a quick glance at the temperature graph on MSI Afterburner during our run of 3DMark FireStrike Extreme while overclocked showed only a few °C increase over our recorded result here. Clearly, Gigabyte has done something right with this cooler.

When it came to power consumption, the power-sipping MSI card still reigned supreme at just 255 watts under load. The smaller Gigabyte card performed respectably, coming in at 271 watts under load, which was lower than the other two cards. However, this can again be explained by the lower clock speeds of the card. In an overclocked state, the card would probably post numbers on par with the ASUS and Gigabyte G1 Gaming.

When it comes to gaming performance, the Gigabyte GeForce GTX 960 2GB OC is on par with the cards from the other manufacturers. It suffers a little in the initial benchmarks due to its lower clock speeds, but it proves that it has the chops to take on the other cards in our overclocking tests.

After taking into account its lower clock speeds, its power consumption figures are not too noteworthy, sitting in line with the ASUS and other Gigabyte G1 Gaming card. But when it came to temperature performance, the two-fan Gigabyte card proves itself to be a stellar performer, handily eclipsing the other cards in our comparison.

At just S$359, the Gigabyte GeForce GTX 960 Windforce 2X OC 2GB is slightly cheaper than the G1 Gaming triple-fan card, which retails for S$379. As mentioned previously, Gigabyte sees the card as a more affordable alternative to the G1 Gaming, and our tests show that for S$20 less, you still retain more or less similar performance and go on to gain better cooling performance and compatibility with a wider range of cases. 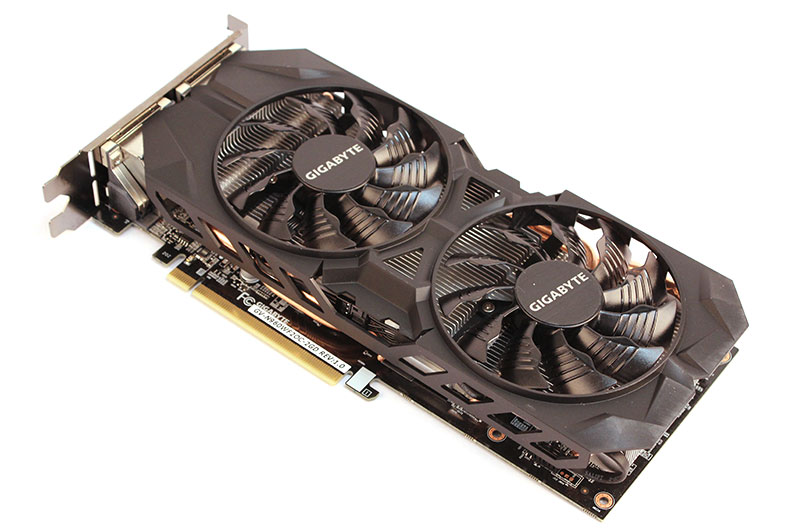