Gigabyte GA-Z77X-UP7 Motherboard - The King of the Hill?

Gigabyte is a company not known to rest on its laurels. Back in 2008, the company introduced its Ultra Durable 3 technology that boasts of two ounces of copper for both power and ground layers with then PCB. This technology is touted to make its boards run cooler, with enhanced stability for overclocking and improved power efficiency. With the advent of motherboards like the ASRock Z77 OC Formula and the MSI Big Bang Z77 MPower that are officially certified to be overclocked, it is only natural that Gigabyte joins in the race with its own offering that features a new and improved Ultra Durable technology with the Gigabyte GA-Z77X-UP7! 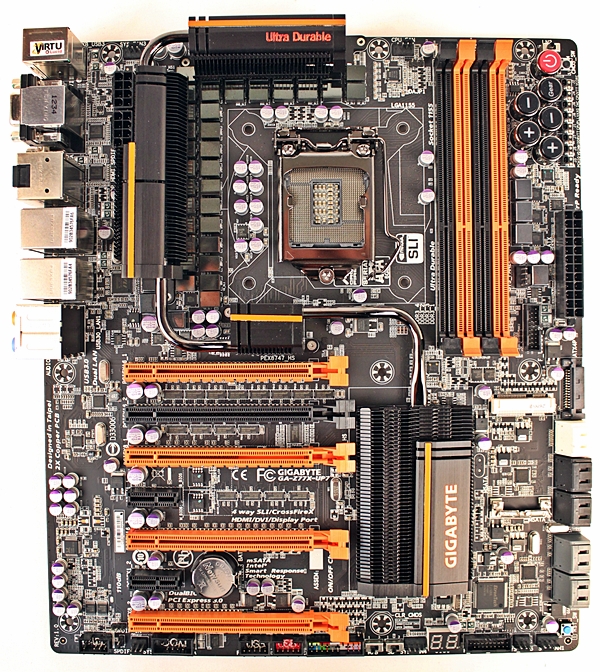 We first laid eyes on the board back in Computex 2012 when Gigabyte was introducing its Ultra Durable 5 technology; however, the board was still in development and it looked rather muted. It did boast of hardware specifications and features that were unheard of, and tested, until now. Besides featuring a mind-boggling 32-phase VRM design, this  Extended ATX (EATX) motherboard also features the Ultra Durable 5 technology where the board's single package, single silicon MOSFET called the PowIRstage IR3550, is the single and most crucial improvement over the previous generation Ultra Durable 4 technology.  This new single package design can deliver up to a whopping 60A of current and also enables much cooler VRM operating temperatures; thereby increasing the overall efficiency and longevity of the motherboard.

The GA-Z77X-UP7 sports a LGA1155 CPU socket and is able to support overclocked DDR3 memory modules that have been rated up to 2,800MHz. Although its doesn't support memory modules that has been rated up to 3,000MHz like the ASRock Z77 OC Formula, its 32+3+2 power phase design (32 CPU phases, 3 for onboard graphics and 2 VTT phases) is an industry first. In addition to its new MOSFET design, the board also features an All Digital Engine to deliver power to its CPU.

Its bright orange PEG slots not only grabs your attention, they are also capable of providing support for both 4-way ATI CrossFireX and NVIDIA SLI graphics configuration. As a nod to the power user, there is a single black PCIe Gen 3.0 x16 PEG slot that is sandwiched between the first two orange slots. This unassuming slot provides direct connection to the CPU and bypasses the splitter chip for a true single graphics card configuration and ensures there's reduced latency by cutting out the 'middle man'.

According to the manual, the abovementioned black PEG slot operates at x16 speeds on the PCIe Gen 3.0 bus when a lone discrete graphics card is installed at that slot - this is also provided that an Intel 'Ivy Bridge' CPU is installed since only these chips have a PCIe Gen 3.0 controller. Once any card is installed in an orange PEG slot, this lone black slot will be disabled. 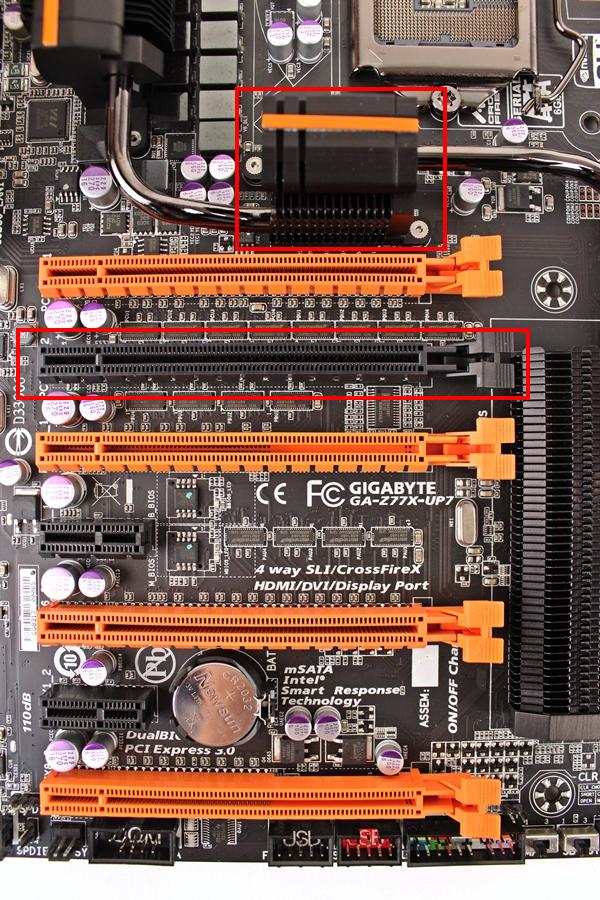 So apart from a special black PEG slot (labelled as PCIEX16_2), let's talk about 4-way graphics support utilizing the rest of the orange slots that are labelled as PCIEX16_1, PCIEX16_3, PCIEX8_1 and PCIEX8_2 slots (from top to bottom referring to the photo above). Usually, LGA1155 CPU based boards can only supply 16 lanes for PEG slots and offer very limited bandwidth when there are more than two graphics cards to be supported. However, this monster motherboard spares no expense to equip it with the expensive PLX PEX 8747 high speed switching chip, which takes in the 16 lanes from the processor's PCIe 3.0 controller and fans it out to supply up to 32 PCIe lanes, essentially doubling the bandwidth. This allows the board to support PCIe lane configurations in the following manner - x16/x16, or x16/x8/x8 or x8/x8/x8/x8  - to support dual, triple or quad graphics card simultaneously respectively.

Needless to say, you can tell from the photo that the board doesn't have any legacy PCI slots to support older RAID or sound cards. Also worth noting from the photo below is the black heatsink that's marked with a red box, provides cooling to the PLX PEX 8747 switching chip; the heatsink is also connected via a heatpipe to the other VRM and chipset heatsinks respectively.

As we trace the heatpipe up to the VRM heatsinks, we noticed their fin-like design, which Gigabyte has aptly named as "Thin Fin" heatsink design and it sports the signature Gigabyte OC motherboard's sparing orange livery. Gigabyte claims the new heatsink design offers a larger surface area so that quicker heat exchange can occur. 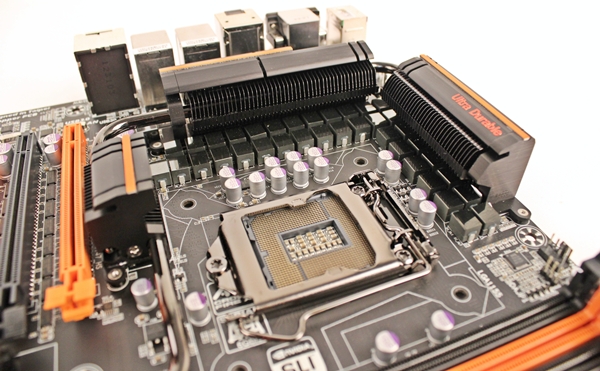 We also see the high capacity 60A ferrite chokes that are located in front of the VRM heatsinks that work together with the PowIRstage IR3550 MOSFET as well as its digital power controllers for CPU voltage regulation.

Moving beyond the CPU socket, we see the four DIMM slots and a collection of OC-Touch buttons and their functions are further explained the Overclocking section of the article. Near the buttons are the LN2 switch and the Clear CMOS button. We did notice that once the board is mounted in the chassis, and with the optical drives mounted, the clear CMOS button may not be accessible anymore. Furthermore, there isn't one located at the rear I/O panel; hence, if the BIOS settings need to be reset, the only way is to short the clear CMOS jumper located near the last orange PEG slot of the board. 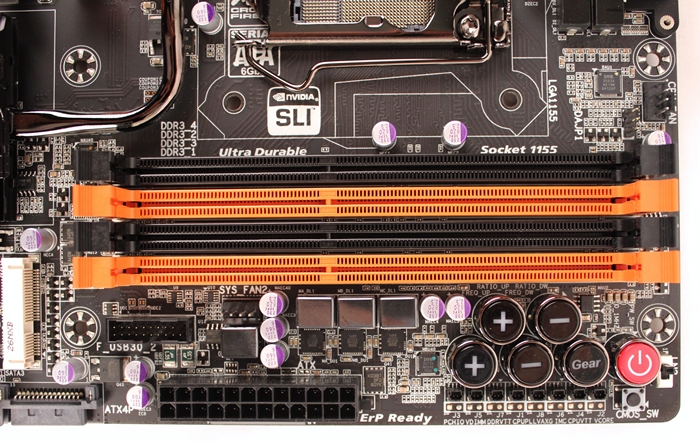 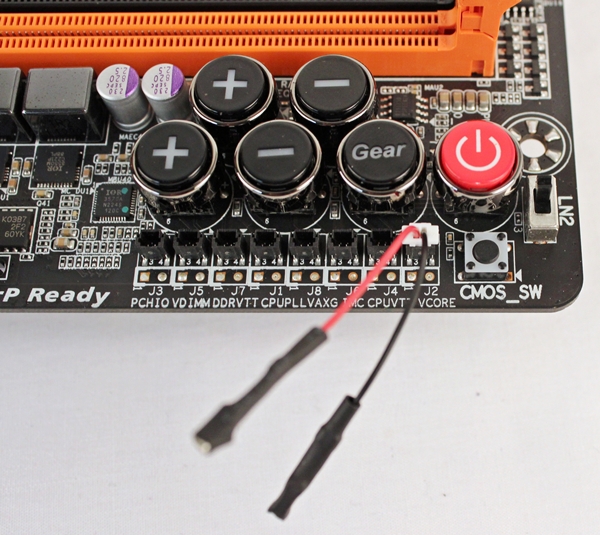 Write a Review
Compare This | Specifications
Rich feature set
Highly overclockable
Support for 4-way GPU setup
Wi-Fi and Bluetooth connectivity
Very expensive
No support for Thunderbolt
Disparate mix of supporting software utility
Our articles may contain affiliate links. If you buy through these links, we may earn a small commission.
Sponsored Links