It used to be that small factor systems were pegged as lacking in performance and features. This statement is no doubt a sweeping one, since there have been some attempts, notably from Shuttle to create small factor motherboards that are as competent as a full-size version. However, Shuttle is catering to a niche market that's mostly made up of enthusiasts that are into assembling their own home theater PCs (HTPCs) or portable LAN gaming rigs.

With the entry of more chipset options with decent integrated graphics from both AMD and Intel, there's no longer a need to pay premium prices for such systems, especially if it's just for HTPC usage, where HD playback is the main attraction. Intel's Clarkdale processors, which brings the graphics controller onto the same die as the CPU, are a step forward in this direction together with the Intel H55 Express chipset.

Now Gigabyte and a few other manufacturers like ECS and Zotac have further reduced the footprint of this chipset to its bare essentials. With just one PCIe 2.0 x16 slot and a size slightly larger than the average palm, the Intel H55 Express chipset is now available in a mini-ITX form factor. Not only that, the motherboard manufacturer has added USB 3.0 as a sweetener for those who are looking further into the future. Here then is the Gigabyte GA-H55N-USB3: 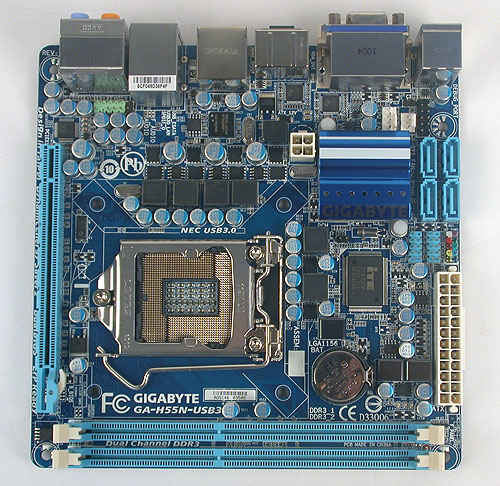 Write a Review
Compare This | Specifications
Very competitive performance in benchmarks
Excellent BIOS with lots of tweaking options
Board layout could be improved further, especially for the DIMM and PCIe slots
Our articles may contain affiliate links. If you buy through these links, we may earn a small commission.
Sponsored Links